Although we love Warhammer 40,000, the game’s complexity can be daunting, particularly for newer players. In Ruleshammer, we look at the nuances of the game’s rules and how they affect gameplay, clearing up potential issues and helping make sense of some of the game’s less common interactions. In today’s Ruleshammer, Rob “Vre’kais” Chilton covers the FLY and AIRCRAFT keywords, and how they’ve changed.

Few rules have had the revision history of 8th Edition’s lifespan that FLY has had. Whilst the last edits are pretty clear the many different versions can and still does lead to confusion. Add into that mix the addition of the AIRCRAFT keyword and there’s a whole bunch of interactions between these models and everything else to go over.

What does FLY do?

In the Movement Phase and the Charge Phase

I think there’s still an easy mistake to be made here with how the rule is worded, “it can move across models as if they are not there” is one part and then separately; “and when moving across terrain features, vertical distance is not counted against the total it can move”. Why does this matter? Well bizarrely despite being models by definition in English and many other languages, Terrain pieces are not “models” in the rules. So the “as if they are not there” part doesn’t apply to things like ruins. I’ll explain the consequences of this later on, but for now I want to focus on what it does let you do.

FLY lets you move across models and across terrain without accounting for the vertical distance necessary to clear those obstacles. 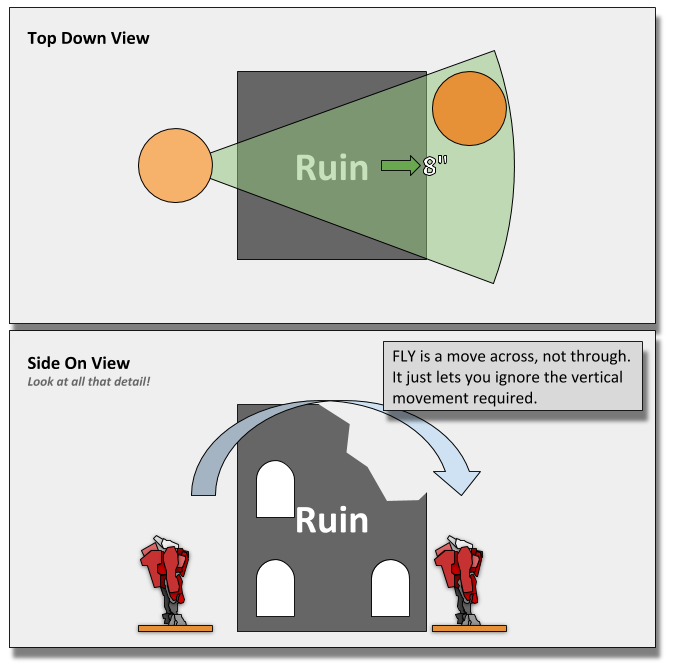 FLY is similar in the Charge Phase but loses the immunity to vertical distance measurements for terrain. This is to prevent the 0” charges that the original wording of FLY allowed. 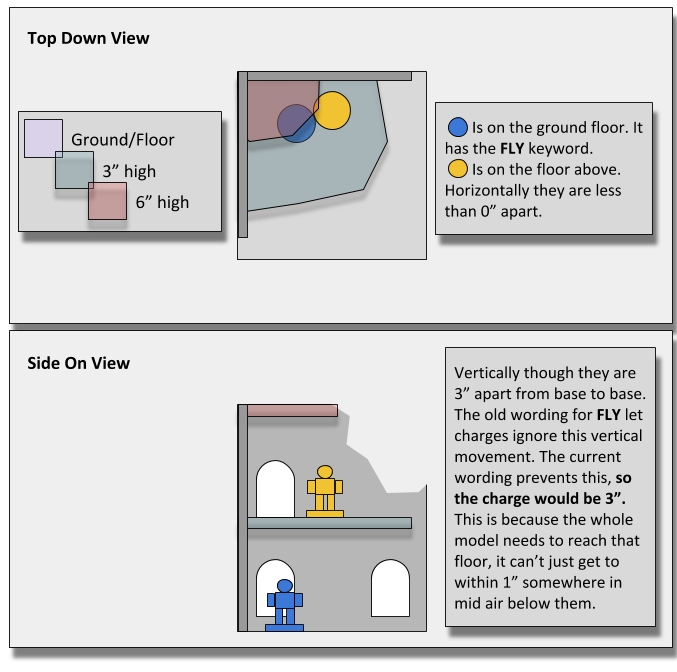 It’s also worth mentioning again that Heroic Intervention takes place in the Charge Phase, so FLY still allows those models to move across others as usual. They do still need to end closer to the nearest enemy model though, I covered this in more detail in this article.

What does FLY not do?

It doesn’t allow you to move through Terrain

The rules for FLY are careful to say “across” rather than “through” models or terrain where appropriate. Through would imply that you can ignore terrain entirely but it’s not quite that simple. If you have a model with the FLY keyword but that lacks the INFANTRY keyword then it’s movement is blocked by the floors and walls of RUINs just like other models.

Only INFANTRY, BEASTS, SWARMS and units that can FLY can be set up or end their move on the upper floors of ruins (any unit can do so on the ground floor). INFANTRY models are assumed to be able to scale walls and traverse through windows, doors and portals readily. These models can therefore move through the floors and walls of a ruin without further impediment. 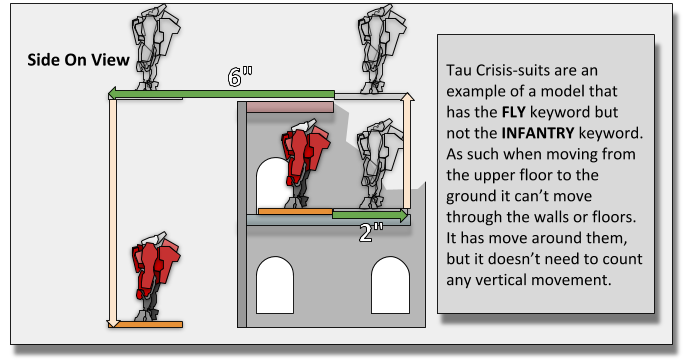 It doesn’t do anything in the Shooting, Psychic or Fight Phases (most of the time)

Moving in the Shooting or Psychic phases is usually the result of an ability, stratagem or psychic power. Most of these abilities include the wording “as if the Movement phase.” This is a very important distinction because if it does say that then all FLY rules applicable to that phase can be used.

Q: When a rule allows a model or unit to take an action (move, shoot, charge, fight or attempt to manifest a psychic power) outside of the normal turn sequence, and that rule explicitly mentions to make that action as if it were a different phase of the turn structure to the current one, e.g. ‘That unit can shoot as if it were the Shooting phase’, do rules that are normally used during that phase (in the example this would be the Shooting phase) take effect? Is the same true of Overwatch attacks?

What is interesting is that without the “as if movement phase” distinction, some core movement rules no longer apply.

All models in the same army are friendly models. Models controlled by an opposing player are enemy models. When you move a model in the Movement phase, it may not be moved within 1″ of any enemy models.

Most of these abilities have been FAQed and updated so I’m not going to list them here, I think there are still a few left though. These abilities would allow you to move a model to within 1” of the enemy in the Shooting or Psychic phase with charging. I don’t think this is intended though despite GW’s many attempts to find and patch all of them.

What models gained this keyword?

So all models with a minimum move, simple enough.

What does this change?

So models moving around AIRCRAFT don’t need to worry about these models and can move within 1” but not end the move within 1”. Bit of a confusing sentence but there’s a distinction in the rules between “moving” and “ending a move”. I covered the core of this rule in an earlier article on moving near the enemy. Essentially this allows players to ignore AIRCRAFT with regard to that rule. It doesn’t let you end within 1” of any enemy unit though even AIRCRAFT, as that would allow you to potentially fight an AIRCRAFT without declaring a charge on it.

Falling Back from AIRCRAFT

QUOTE If, when a unit is selected to move in the Movement phase, the only enemy units that are within 1″ of it are Aircraft, then it can still make a move (i.e. it does not have to Fall Back in order to move).’

This was the other key change, falling back from AIRCRAFT (basically all Flyers) is no longer necessary you can just move and shoot normally. You would still need to move though as the AIRCRAFT keyword doesn’t suspend the rules against units within 1” of enemy units firing in the shooting phase.These changes did really make Flyers interact in a far more realistic way, it will be interesting to see how this is built upon or changed for 9th edition.

See You in 9th Edition!

I hope these diagrams help explain this much tweaked and updated set of rules. Now that 9th edition is announced and GW are ramping up the hype to it’s releases, Ruleshammer will swtich Q&A mode as we wind down to the end of 8th. As such this is the last proper article of this edition. If you want your rules debate answered before the end of this edition, you can submit questions both on reddit, or via this form. Or drop us a note in the comments below or email us at contact@goonhammer.com.