Welcome to Ruleshammer! This week some more Q&A from your submitted questions!

Q: Could you take 2 minimum size squads of Dominion in a single Sororitas Rhino and benefit from the Holy Vanguard ability (6″ normal move at start of first battle round) twice?

I don’t think this does work based on perhaps a pretty pedantic reading of the ability.

Holy Vanguard: At the start of the first battle round, before the first turn begins, this unit, or the ADEPTA SORORITAS TRANSPORT it is embarked within, can make a Normal Move of up to 6″ as if it were your Movement phase. This unit must end that move more than 9″ away from any enemy models. If both players have units that can do this, the player who is taking the first turn moves their units first.

This ability gives the unit or their transport the ability to make “a Normal move,” singular. So essentially for the second Dominion unit their transport already has made “a Normal move” and the ability ends. Maybe this is just seeing a convenient interpretation though, but personally I’d expect something more specific to allow for multiple moves.

Competitive Note: This is how the majority of events are ruling this ability as well.

Can the Big’ed Bossbunka use the Careen stratagem to move 6″ before it explodes?

No, it’s not allowed to move at all according to the core rules.

Move (M): This is the speed at which a model moves across the battlefield. If a model has a Move of ‘-’ it is unable to move at all.

So despite the stratagem allowing for a normal move, the models movement of “-” precludes it being able to move at all.

Can a model move out of coherency when using Careen?

One other facet of careen that could probably use an FAQ is if units such as RUKKATRUKK SQUIGBUGGIES must remain on coherency when they made their normal move. The stratagem isn’t exactly full of details on it.

Careen: Use this Stratagem in any phase, when an ORKS VEHICLE model in your army that is not within Engagement Range of any enemy models is destroyed and explodes. That model can make a Normal Move of up to 6″ before resolving the explosion. If that VEHICLE is a WAGON or TITANIC model, this Stratagem costs 2CP; otherwise, it costs 1CP.

In my opinion though, I think they should be able to end that move out of coherency with their unit. My reasoning is that Careen takes place after the model is destroyed and the unit doesn’t need to be in coherency of destroyed models. It doesn’t actually say this anywhere; it’s just sort of assumed. Otherwise if destroyed models were still part of the unit, then units wouldn’t be able to move at all once they lose a single model. The “Rule of Fun” is probably worth mentioning as well though – the Stratagem is called Careen; I’m not sure how many fiery exploding vehicles meet the ends in neat formations.

Core Rules: Moving near models with parts sticking out

Q: How do I handle intersecting models when a model has a hover base? I was attempting to move into a position to get a wrap on a Starweaver, and my opponent informed me that, since my one DC jump pack marines had part of his base under the wing of his Starweaver, I could not move to the position I wanted. I know the rules section concerning moving through/over models states that you cannot finish a move on top of another model or its base, but what about under a part of the model that isn’t the hull and isn’t the model’s flying stand? Wouldn’t that mean that moving around an actual plane would force me to move around the entire model’s “footprint” rather than just its base?

Thank you for all your efforts! I greatly enjoy reading Ruleshammer articles!

This issue is super messy and complex to be honest. It’s one that I think everyone should check pregame because we all make a set of assumptions about it and I think most players are inadvertently inconsistent about it. In a way that is really just an application of common sense in what is arguably a slight gap in the rules, where “on top of” is poorly defined. For instance this Aircraft is outside of the battlefield edge as most players would agree. 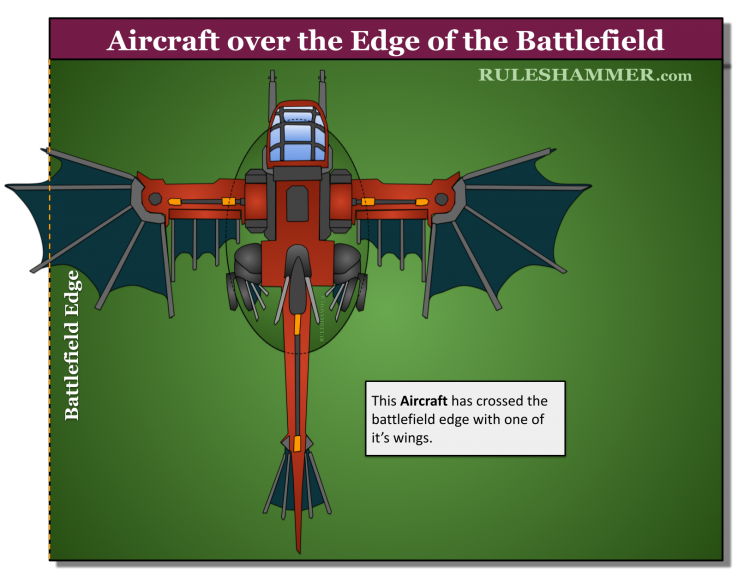 but this Aircraft hasn’t ended the move on top of other models, or has it? 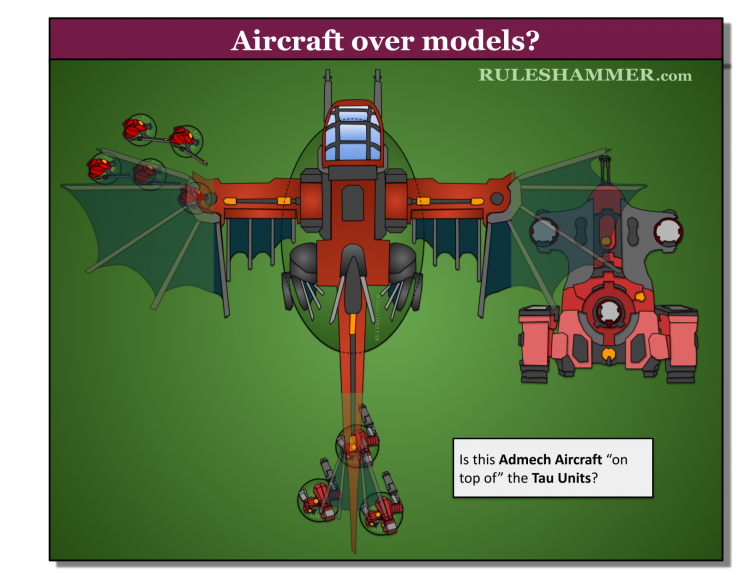 I reckon the groups that agree on both situations would share a lot of players. It’s a bit of contradiction that most players are okay with, that the first diagram does show a model that has crossed the battlefield edge but the second diagram doesn’t count as being on top of those other models. Personally whilst I think your opponent was arguably technically correct, applying that interpretation has too many other issues. I think the consensus is that overhanding bits only obstruct movement physically, like you can’t claim a model has ended a move phased into a gun or wing.

With that said, it’s not clear from your question if instead of ending the move under a wing your opponent was talking about not being able to move through such a part. For instance this Daemon can’t simply phase through the front wing of a Devilfish for a few different reasons. 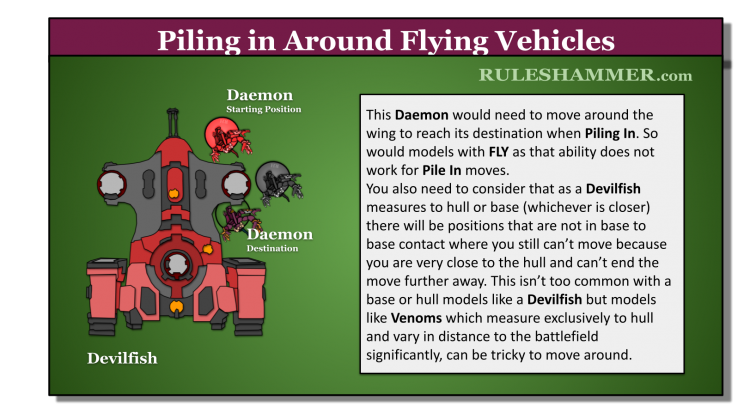 Starweavers currently measure just to their base so there’s not currently the “moving further from the hull” concern for them, just not being able to phase though parts. You should be able to move around them though so long as you end the move closer to the base.

Adeptus Mechanicus: What the heck is a relic?

I’d usually edit down questions but really this one has done so much of the explanation and work for us already, I’m going to share the whole thing.

Q: Here’s a fun one. AdMech have a codex secondary (Accretion of Knowledge) that rewards you for destroying models that meet certain criteria – one of which is “the model has a Relic”. What is a Relic?

Four examples where it’s less than 100% obvious, in increasing order of difficulty.

2. T’au have Signature Systems, not Relics. They’re extremely clearly relic-replacements – they have the same rules for granting them, the strat for extra ones, yadda yadda yadda, so the RAI seems pretty clear. But the word “relic” doesn’t appear anywhere in Codex: T’au Empire…

3. T’au also have Prototype Weapons Systems. If a Signature System is a relic by proxy, then should something you can take in place of a Signature System also qualify as such? Certainly, an Amplified Ion Accelerator on a Riptide, or Cross-Linked Stabiliser Jets on a Commander, look an awful lot like relics. And you get more of them by using the strat for extra Signature Systems. But give the Gatling Burst Cannon upgrade to a unit of five Crisis suits, and suddenly they give up 15VP all by themselves if these count as relics!

4. The new Black Templars have Relic Bearers – upgrades that you buy with points and give to arbitrary models, not just characters. In the “yes, these are relics” corner – it’s in a rules section entitled “RELIC BEARERS”, taking one of these upgrades also gives the model’s unit the RELIC BEARERS keyword, and the upgrades themselves are listed in a table where the names of the upgrades are in a column headed “RELIC”. In the “no, these aren’t relics” corner – the actual rules section itself never uses the word “relic”, carefully referring to them as “upgrades” in every single instance. And in game design terms, these are clearly BT’s equivalent of GK’s Visions/Gifts, or Orks’ Kustom Jobs, or TSons’ Legion Command upgrades, none of which anyone would consider “relics”. My personal stance here is “no, they don’t count” – those “no” arguments convey intent more clearly than the “yes” ones in my view – but it’s so unintuitive to try to argue that a RELIC BEARER is not bearing a Relic
– Chris Paterson

So yeah essentially I think you’re correct and we probably can all agree that a relic is any wargear conveyed via the “if your warlord is X you can give Y from this list” mechanics. It’s 100% a thing Admech players might want to make clear pregame. I think you’ve identified two areas I’d like to highlight further.

This isn’t the first time GW have written rules using Relic as if it’s a catch-all term as far as I know, it’s a bit of a shame that none of the glossaries define the factions special terms for these are being equivalent. One thing worth mentioning is that so far all of the 9th Edition books have managed to have a page with the title Relics where their relics are lists, though with some flavorful text still such as in the Orks codex.