Saga of the Beast: The Lore 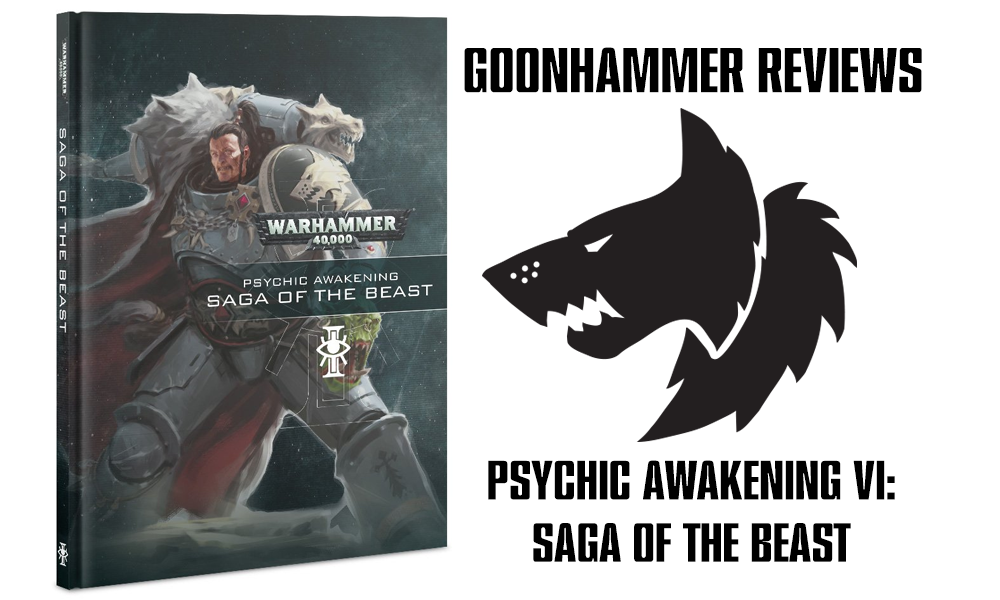 The Great Rift. The Cicatrix Maledictum. The Devourer of Hope. Call it whatever you want, the veil of warp energy that now splits the galaxy in two has been nothing but bad news no matter the species. That is, bad news unless you’re an ork.

Oh sure, the rift killed countless orks, it’s very birth consumed millions. Millions more died fighting the demons that spilled forth and yet still more died when the cascading waves of warp energy caused Weirdboyz and Warpheadz to spontaneously detonate.

But that’s nothing to an ork.

For Gork’s Grin, as it’s known to the greenskins, brought with it war. Across the stars battles ring out. Some orks have even turned their ships and flew right into the rift in search of bigger battles. 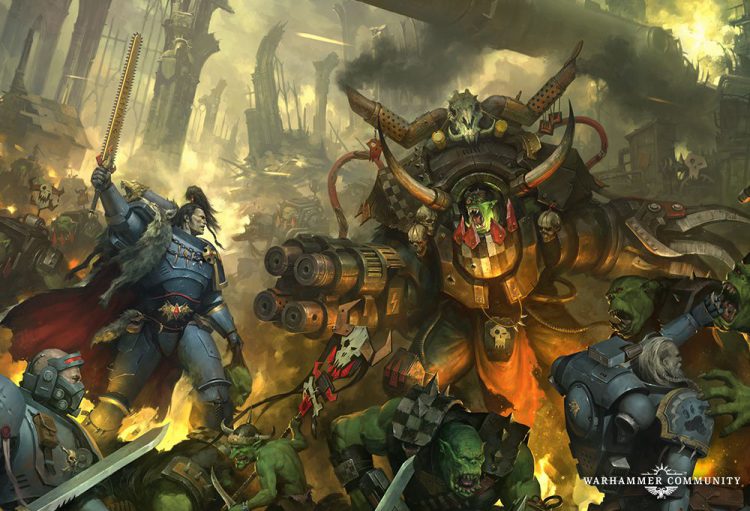 One ork in particular took it as a sign. Ghazghkull Mag Uruk Thraka saw Gork’s Grin as a signal that he was chosen by Gork (or maybe Mork); as their prophet he progressed his Great Waaagh! as he never had before. As he eliminated rival warlord after rival warlord, the raw waaagh energy he left in his wake drew Orks from across the stars. Gork’s Grin helped with this as well, with it’s strange new manifestations of energy  Warpheadz’ gained the tendency to teleport entire battalions of Orks lightyears away.

The growing energy of the Orks did not go unnoticed. Space Wolf Rune Priests across the galaxy were wracked with visions of a great altar with glowing green motes drawn towards it. After deliberation they saw it as a sign that the Orks were consolidating power and knew they must step in. Wolves were recalled from various wars, including members of the Deathwatch, in preparation for the coming crusade. It was to be a grand undertaking as the Ork menace had spread and grown. 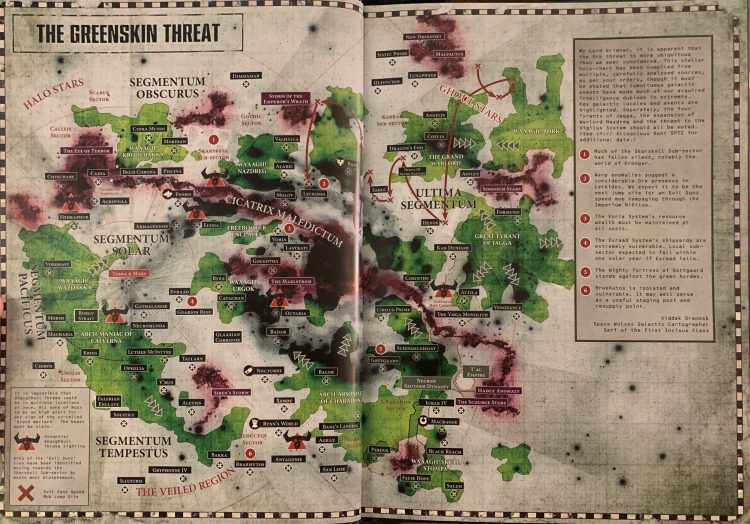 I haven’t normally taken a picture of the map for these lore reviews, but my jaw legit opened a bit when I turned to this page. Previous books have shown the embattled factions tucked into their corners, perhaps spreading a bit. Not the orks. They’re everywhere. Everywhere. Previous books have taken place in a system of sub-sector but the battles Saga of the Beast are all over the map on both sides of Gork’s Grin.

Ceibhal was home to the Obsidian Jaguars before the orks arrived. The Greenskins overran the jungle planet, decimating the Chapter in grand battle. The Sons of Morkai and a strikeforce of Blackmanes saw the system in green-tinged visions but arrived too late to save the embattled Jaguars. By the time they arrived their only hope was to descend on their fortress monastery: the Sabre. Their hope was to recover any remaining geneseed and rebuild the chapter elsewhere.

The plan was to distract the orks with drop pod landings while a strikeforce descended directly on the monastery in a stealth operation. The plan was to recover the geneseed and destroy the monastery, denying it to the orks and killing scores in the explosion. Things were not to go well for the valiant Marines however. Despite a successful insertion, the orks were inevitably drawn to the sounds of battle and fought in earnest. Massive beasts, strong enough to wrestle a Space Marine to the ground, emerged to tear through Astartes ranks.

Both squads did eventually reach their targets; one killed Mek after Mek and planted melta bombs to destroy the structure just in time to find out that the geneseed stores could not be salvaged. The Sons of Morkai destroyed the saber and killed countless orks, though none count the battle on Ceibhal as a victory.

Leckides sees my favorite battle in the book. Driven by infomation obtained by the Inquisition, the Ironwolves, Seawolves, and Deathwolves, descended on the planet in armored ranks of tanks, bikes, and Thunderwolves. They discovered a Speed Mob the likes of which had never been seen. Thousands of ork vehicles rampaged across the planet, challenging each other with rude gestures and taking the challenge as an opportunity to smash each other. At the center, a massive rolling battle fortress crowned by psychic Orks chained to a crenulation.

In a story that is both reminiscent of Fury Road and really made me wish that Speed Freeks had been expanded into a full game line, Space Wolf cavalry thrust directly towards the fortress. Knowing there was no way they could stop the Speed Mob in open combat, the Marines drove like a spearpoint straight into the heart of the mob. Thunderwolves jumped from Trukk to Trukk, tearing orks out of the cabins and mauling them to shreds. As they got closer to the fortress, the warp-energy emanating from the fortress became so powerful that every Rune Priest in the battle died when their heads exploded in their helmets. Metal as hell.

Leckides represents another loss in the Space Wolf campaign. As soon as they got too close to the fortress the energy hit a zenith and with a flash of green light the entire Speed Mob disappeared to carry their waaagh elsewhere. 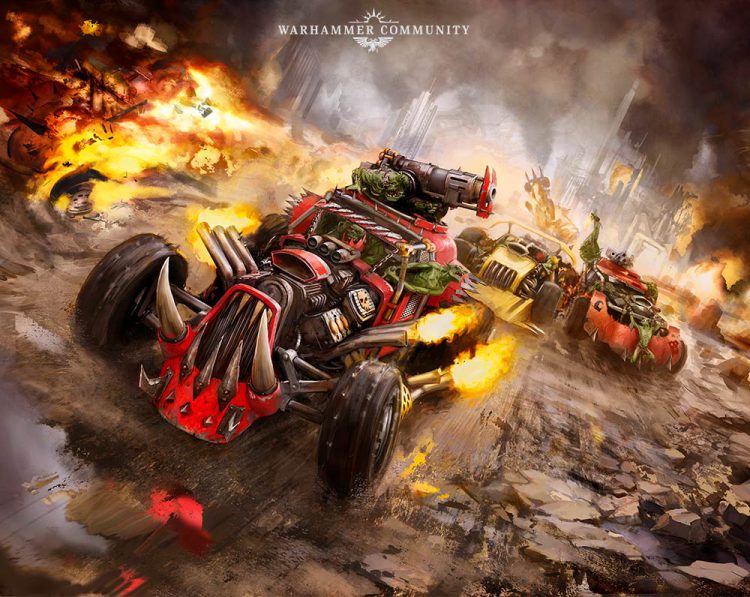 On the refinery world of Gaivos, the Ork menace descended and quickly took control of a town-sized refinery. Knowing how critical this planet was to the Imperial war-effort, a force of Space Wolves descended on the planet to retake the refinery. Upon their initial sortie into the refinery itself they encountered little resistance and took the structure back with little effort. Towards the end of the conflict, the wolves saw Blood Axes daubed in blood and wearing camouflage slip into the jungle.

Embolden by the victory they claimed in the refinery, the Firehowlers struck directly at the retreating orks only to walk straight into an ambush. Not expecting the orks to display advanced tactics, the Firehowlers were drawn into trap after trap. Frustrated, they fought harder only to find themselves bogged down further. It took an assault by the Drakeslayers and Deathwolves to free the Firehowlers from the ambush. Taking the time to draw up a plan, they followed their squads of Thunderwolves into a two-pronged attack that broke the orks between them.

Blood ran in rivers and bolters fired (oh so many bolters) but eventually the Wolves claimed victory. The dense vegetation that had helped the orks set their traps doomed them as the battle turned into open warfare. Unable to leverage their numbers they were struck down and Gaivos was eventually reclaimed for the Imperium.

The Evraad System saw battle of a piratical nature as a massive fleet of Ork ships tore through the system. Imperial ships, desecrated with Tau engines and Ork glyphs haphazardly added to the hulls, were turned on their original owners as soon as the greenskins could retrofit them. Wolf Lord Kjarl Grimblood knew that it would take everything he and the Imperium could muster to stem the green tide.

The Gnarion Reef is a field of asteroids that would be the site of Grimblood’s stand. Imperial defenders towed barely-function ships along with them into the field, and then all powered down to stage an ambush. They waited, patient, even as Orks began cutting straight through the hulls of their ship. Once the attack order was given however, the defenders struck out in a coordinate attack that destroyed thousands of enemies. The Orks were taken by surprised, though did eventually regain cohesion and begin attacking. Of note in this section is a bit about Nobz wearing void-armor launched via ship-mounted trebuchet’s to land directly on Imperial frigates. Awesome.

The Ambush at Gnarion’s Reef ends in a stalemate and a battleplan is included to let you fight out some pivotal battles. It takes place on the hull of a ship; the attacker is trying to breach the hull and gain access to the inside decks while the defender attempts to repel them.

Located amidst a cluster of agri-worlds, Gottgaard was an important fortress planet that oversaw the defense of these vital planets. Home to Militarum, Sororitas, and Astartes forces, Gottgaard represented a krumpin’ opportunity too good for the orks to pass up. Their attack was focused on sites of military and spiritual importance to the Imperium and so Wolf Lord Logan Grimnar himself led the defense. His hope was to wipe out the Waaagh! before it could join with Ghazghkull.

The battle over the Barbican of Saint Hermesinda would be a bloody one. The Orks through everything they had at the fortress walls: Meganobz, Killa Kanz, and even Stompas were brought to bear. Ever a cunning tactician, Grimnar used the destruction wrought by these beasts against them. Using the masonry as cover, the Space Wolves turned the siege into a protracted series of skirmishes. Lootas were drawn forward and slain. Armored vehicles were brought low with charges as strike teams advanced under cover.

While many brave soldiers were lost that day—some described as being turned to mist—Grimnar’s forces eventually won the day and defended the Barbican. Grimnar’s plan to destroy this branch of the Waaagh! has not been fully realized, however. The Orks remain on Gottgaard assaulting other key landmarks. 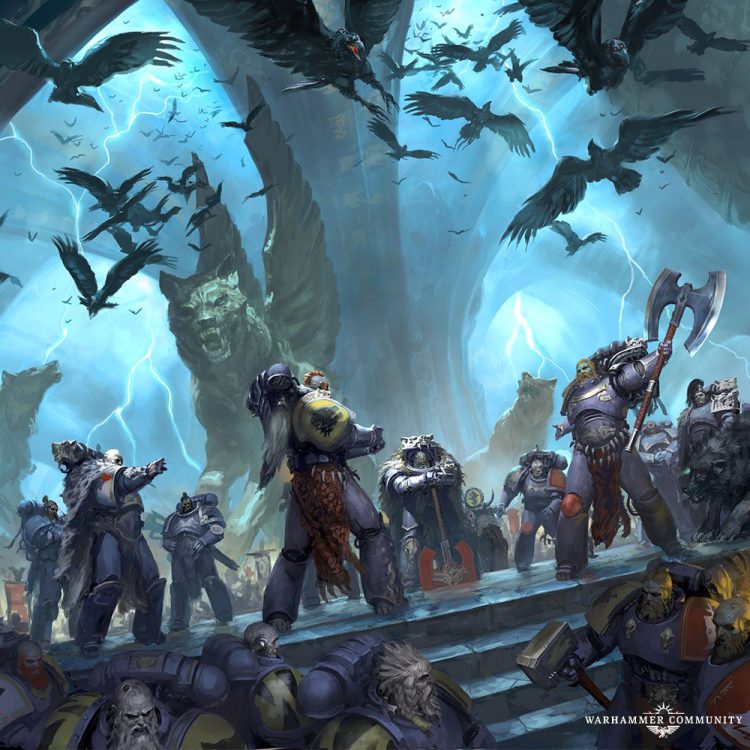 6 battles?! Perhaps it shouldn’t be a surprise that the Space Wolves vs Orks book features the most battles. This battle takes places within the corridors of a hydrofactorum. Snakebite orks had taken the facility, and stuffed it full of squig-borne traps. Gnasher squigs tore Space Marines limb from limb, while hidden clay pots were packed with smaller squigs. These pots broke open during combat and the angry creatures trapped within buried their way into the soft spots of Marine armor, devouring the Astartes from within.

Inch by inch, corridor by corridor, the Space Wolves pushed further into the center. What they found was horrifying. Throughout the battle they’d faced Orks of Unusual Size and merely chalked it up to Ork physiology. Unfortunately, their origin was far more sinister. Painboyz and Runtherds had turned the center chambers of this facility into the kind of biolab that would make Fabius Bile nod in appreciation. Here these “doctors” pumped orks full of vile liquids that swole the greenskins to massive proportions.

The melee was brutal. Scores of Marines lost their lives, though such was the height of the Space Wolves bloodlust that they were eventually victorious . It took days to restore function to the hydrofactorum and weeks to cleanse the taint of the xenos chemicals, though eventually Brakhutos was saved.

Notice anything missing? No Ragnar Blackmane or Ghazghkull! Their datasheets are included, as are images of the awesome new models, but none of the lore segments in this book feature these champions. It feels strange to receive a week’s worth of previews about their titanic battles only to not have them expanded narratively. Perhaps this is included in the box set? It’s a little bit of a bummer.

Overall the lore in this book is fun, though it doesn’t move anything meaningfully forward. I think I’ve accepted that the Psychic Awakening event is more about exciting new rules with some descriptions of cool battles and not a Malign Portents-esque campaign that brings with it critical lore progress. Maybe it’s because I’m stuck inside, suffering fever dreams induced by the number of times my kids have watched the live-action Aladdin, but I find myself wishing for a little bit more from these books than just a series of battles. Yeah, void-armored Nobz sailing through space are awesome and I love the squig ambushes but with the exception of Rune Priests’ heads exploding in their helmets, there wasn’t much in this book that felt unique to a grand Psychic Awakening.