In today’s Narrative Forge, Robert “TheChirurgeon” Jones and Evan “Felime” Siefring will be talking about the Missions and Agendas in Crusade, how they differ from Matched Play missions and rules, and what you need to know about playing them. We’ll take a little bit lighter touch than we do with our competitive play reviews since Crusade and Narrative play aren’t so much about crushing your enemies and seeing them driven before you as they are telling a good story.

In broad strokes, the Crusade missions are simpler mechanically – typically with only a single objective – with secondary complexity instead coming from the agendas and other methods of gaining experience. They’re also a lot more willing to be asymmetrical or otherwise delve into mechanics that are thematic, but aren’t perfectly balanced. For the most part, though, they seem to have put a lot of thought into them and they don’t favor either player.

Agendas in Crusade missions replace the secondary objectives in standard Matched Play missions, but they’re similar in many ways. However, they award the units that accomplish them with experience instead of victory points. Along with killing units and the end of battle Marked for Greatness choice, these are the main way to quickly advance your units.

On average, most agendas will net you 4-6 experience points across your army if successful, depending on difficulty. There are some that can potentially award more, but are situational or harder to achieve to that level, and some that give less, but are either automatic or extremely easy.

When selecting agendas, you pick 1 for a Combat Patrol game, 2 for an Incursion game, 3 for a Strike Force game, and 4 for an Onslaught game. Each agenda you pick must come from a different category, forcing you to diversify your goals as your games get bigger.

No Mercy, No Respite

Similar to Matched Play, Crusade provides missions for four different levels of play: Combat Patrol, Incursion, Strike Force, and Onslaught, with each being designed for games of a different size. Unlike the Eternal War and GT missions, missions in Crusade may have extra rewards for players that affect their campaign forces. As we mentioned earlier, these tend to be a bit more asymmetrical than Eternal War missions, and have actual differences for the Attacker and Defender.

There are a few things to note about the rules for Crusade Missions that differ from those in Matched Play:

There are three Combat Patrol Missions, and of these Assassinate is the only one that’s really Asymmetrical.

Rob: Of these, Assassinate is the most interesting, with progressive and endgame objectives around damaging the Warlord, and while I’d have liked to see the reward tied to interacting with the Warlord in some way, that would have been tough to work out for the Defender.

Evan: The incursion missions look quite interesting. I’m torn on The Ritual. On one hand it’s an interesting asymmetrical mission(and I think it’s a good base to build your own similar missions), but on the other, your warlord, who you presumably took because you wanted to do cool things with them, has to do nothing for most of the battle unless they’re a Psyker. I expect imperial armies will be including an inquisitor in their roster who is mysteriously their warlord for this mission. Knights players just cry or accept the loss and play for experience. It might be possible to run a super-heavy detachment of all armigers and an auxiliary detachment with a psyker at the cost of most of your Command Points.

Rob: I think the Ritual is neat but yeah, it’s kind of dumb if you don’t have a Psyker. For me The Relic and Sabotage are the missions I’m most excited to play – they just have more interesting things going on with them design-wise.

Rob: Overall, these are alright. The most interesting of them is Cut Off the Head, and I think that the design space it creates is worth exploring in more detail. Retrieval is also pretty great and the asymmetrical rewards for winning are great. I love the idea of using this mission as a way to get weird allies into campaign armies. 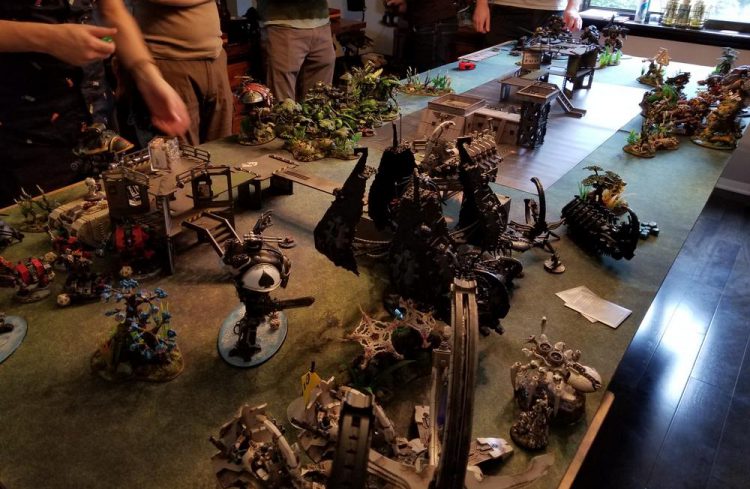 There are three Onslaught missions, for the really big games that are largely going to be occurring well into your Crusade. If you’re familiar with the Apocalypse missions from 8th edition, then these will be familiar.

Rob: Overall these work but I’m not blown away by any of them. If you didn’t think Warhammer 40k really worked for big games, these likely wouldn’t do much to change your mind. I might honestly just move to Apocalypse at this point, but that’s gonna take more conversion work. Maybe worth doing in the future.

The Crusade missions are pretty cool, and do a good job of giving players lots of options at each level. There’s definitely a lot of room to grow from here, and we’re excited to see where they go when they start converting more 8th edition missions to Crusade format. In particular, the planetstrike, stronghold assault, and cities of death rules could all use an overhaul and there have got to be better ways to incorporate battlezones.

As always, if you have any questions or feedback, drop us a note in the comments below or email us at contact@goonhammer.com. Or if you’re Patron, hop on the Goonhammer discord and give us a shout.