Hello Dear Reader, and welcome to my ongoing trek to competitive respectability in the Year of Our Lord 2022. Last time I wrote, I had just wrapped up my time at the Games Workshop US Seattle Open and was planning to take on the May RTT in Asgard. Unfortunately, none of that happened, because pretty much everything that could have happened to prevent me from attending did.

My job – my real job, not this thankless second job that eats up all of my remaining hours that might otherwise go toward “a smart sleep schedule” – requires a modicum of travel. And so I was asked to come up to New York for one night for a couple of meetings. The plan was easy: Fly up Thursday, client dinner, Friday meeting, fly back down.

The trouble started on Friday afternoon. The meeting went great, and we grabbed lunch afterward. I then left from midtown Manhattan bound for Newark airport with about 2 hours to get to EWR. This is, normally, plenty of time. Newark is about 40 minutes’ drive from midtown with no traffic, and I’ve got both CLEAR and PreCheck, so I can walk through airport security in the span of about 5 minutes, because it’s all theater and you can just get the equivalent of a Disney FastPass to not have to deal with it.

Of course that all went out the window when my cab driver decided that the smart play was to take the Holland Tunnel at 2pm on a Friday instead of the Lincoln tunnel. This was not, in fact, the smart play – while traffic at both sucks, one was right around the corner and the other was downtown. It took us half an hour to get to Houston Street, and at that point we spent another 10 minutes literally moving between two lights in gridlocked traffic. Suddenly looking at a massive crunch for time with only an hour until the doors closed on my flight and 30 minutes of traffic (easily) before we actually got through the final five blocks to make it into the tunnel (plus 20 minutes after that to reach the airport), I made the executive decision to take the subway to Jersey. This is easier than it sounds, and living in New York for a decade has made me acutely aware of the fact that the subway is usually just a better option. Had I been smarter I’d have just taken the NJ Transit to the airport to begin with but when the trip is reimbursable I sometimes make bad calls.

So I hopped the 1 train downtown from Houston street. This is a simple route: Take the 1 train to the World Trade Center, then take the PATH train to Exchange place, where I get out and call an Uber to take me to EWR. Total time to do this is about 15 minutes. I get off at Exchange place and hop in the Uber around 2:30 with doors on my flight closing at 3:05pm. The driver – an absolute goddamn rockstar – gets me there at 2:45 and at 2:55 I’m at my gate, a little winded but otherwise comfortably striding on to the plane with 10 minutes to spare. I’M GONNA MAKE IT.

Aaaaaaaaaaand then the plane sits on the tarmac for three hours. Turns out there was some bad weather headed for New York, and so rain delays kept us on the ground waiting for it to pass. That sucks but I can deal with it. Fine. Whatever. Of course, it wasn’t fine, because two hours in the captain comes on the PA to announce that, because the crew have been flying since 5am, they’ve hit the legal cap for the number of hours they’re allowed to operate in a given day and so even though the weather is clearing they have to take us back in and find another crew – this is a lie; there is no other crew and as soon as we’re back to a gate they cancel the flight.

There are no other flights I can get on that night, thanks to a wave of delays and cancellations, so I’m stuck flying back Saturday, and I won’t get home until 6pm, meaning I’ll miss the RTT. Fuck.

Having COVID: 0/10 Stars, Would Not Recommend

Of course, it’s probably for the best that I missed the RTT because the day after I got back I came down with a nasty fever and tested positive for COVID. I’m not entire sure when I contracted it, though in retrospect I’m glad I decided to be one of the few people wearing a mask at the airport and on my flights – removing the mandate is a huge mistake. I either contracted it on the flight up, or it’s possible my son brought it home from school the week prior when he had a fever, though at the time he tested positive for Strep, so he’d have had to have both strep and covid at the same time.

Either way, I spent most of Monday with a fever, aches, and occasional bouts of chills, which is also what happened to me when I got my second vaccination and booster shots. I’m feeling better now – three days in I had kicked most of it, but those first couple days sucked complete shit. Also during this time was five days of quarantining in my home office and avoiding my family. Which meant lots of hobby time.

You might have heard that there’s a new edition of Horus Heresy coming up. I’m not a big Heresy guy and don’t expect that to change, but I do love a lot of the Heresy models and so I’ve been gearing up to try the new rules and get in some test games of Heresy. To-date the only 30k model I’ve really painted is Lorgar and I have a bunch of Word Bearers models, so that’s the 30k army I’m building.

I’m currently in the process of assembling a ton of plastic infantry and terminators I’ve had sitting around since the Calth and Prospero boxes released, as well as some of my favorite 30k models: The Gal Vorbak. 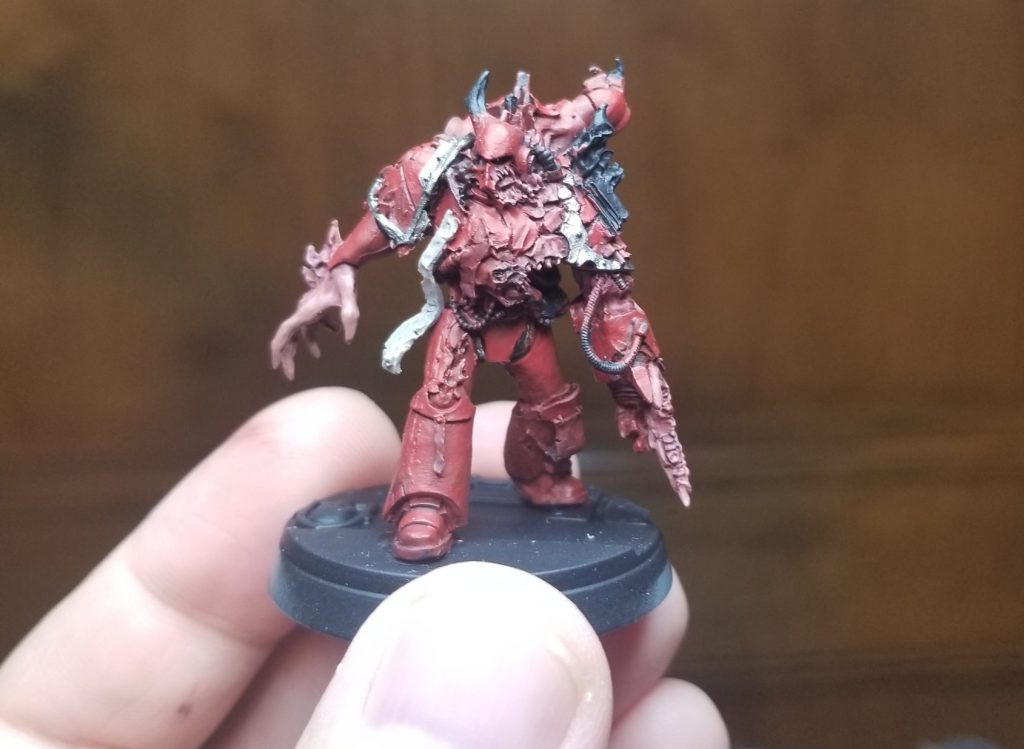 I’ve got ten of these goobers, plus Mardu Layak and his blade slaves, a Mhara Ghal tainted dreadnought, two Word Bearers Praetors – the power armor and terminator variants, plus a Traitor Librarian Terminator I picked up at NOVA 2019. That gives me more than enough cause to take up Word Bearers for the time being, and I’m hopeful the Gal Vorbak will double as possessed when the new models come out so I can continue using them.

I’m also working on a Diabolist I converted from a Dark Apostle Exokan gave me that was missing some parts – including the front of his chest – and a legion chaplain from the Calth boxed set. I’m very happy with the result, which will work very well as either a chaplain, Diabolist, or Dark Apostle. 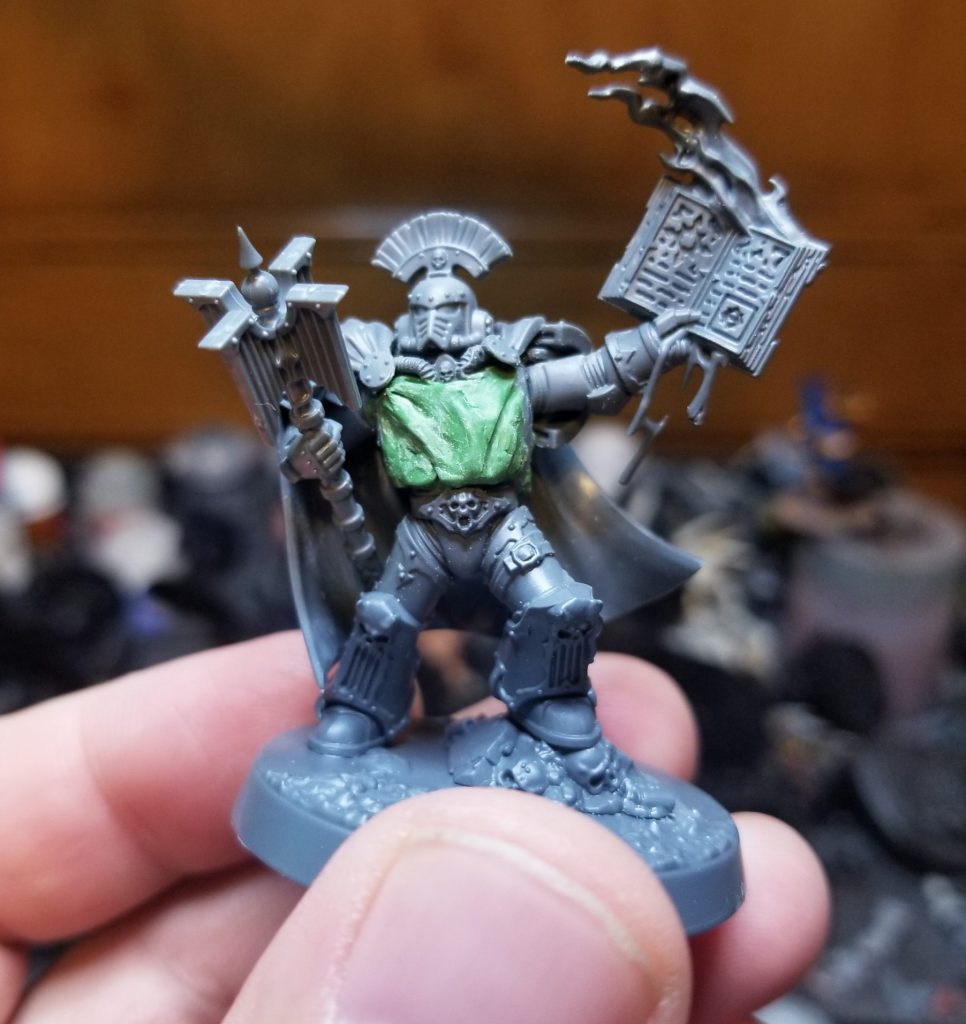 With the models from the upcoming new HH boxed set I think I can easily get 3,000 points of these goobers on the table, which may or may not be something I do more regularly if the new edition ends up being any good. I have my reservations, but I’ll be saving any final opinions for after I’ve played a game or two.

What About the Thousand Sons?

In terms of the 40k stuff I’m doing well, I’m on a bit of a break from the Thousand Sons at the moment. I’m very happy with where the army’s at from a “painting blue and gold idiots” standpoint; I was previously contemplating dropping the idiot Heldrake for something more useful, like a Mutalith Vortex beast. That could still be in the cards, but now that the Chaos Knights book is out I don’t think there’s a Chaos army that doesn’t want a trio of Helverin War Dogs backing the list up. They just add a ton of value with 60″ range, AP-2, 3-damage guns that I was struggling to get elsewhere – the Leviathan was a help here, but his 18″ range left him unable to offer full support (though I did appreciate the fist version being able to just mess up some units in melee). And, true to my expectation, Matt Alee made a very strong showing at San Antonio packing triple Helverins in what is basically the list I’m planning to run.

So my next list is going to include a trio of War Dogs. I’m still waiting on another Helverin kit to arrive that I can convert up for a third model but once I get that bad boy I can just pair it with my other two for a full unit of War Dogs.

Here’s the current version of the list I’m planning to test for the next RTT.

I don’t love losing a unit of Rubrics but I just can’t make everything fit without taking one out. I went back and forth on Tzaangors vs. Cultists for a while – I hate using Cultists since they aren’t ObSec – but ultimately the War Dogs can hold the backfield objective. I’m also not sold on Pyrothrone. Having the feel no pain on the War Dogs seems solid, but I’m not 100% sure I need it yet and dropping it makes me even more resilient to Abhor the Witch. That said, having the War Dog able to up the smite count helps make up for the loss of a unit to rack up smite counts.

I went back and forth on Ahriman’s Disc but ultimately decided that I don’t need it. That said, I do still need the Umbralefic Crystal, so that’s a spot where I have to eat the CP, since I think it’s still worth it to take the Scrolls. That said, I may come back and nix the scrolls if I find the CP is better spent elsewhere. I’m eager to try this list out and see how it plays.

One other thing I’m doing is I’ve signed up to run the narrative event at the US Goonhammer Open in Maryland this fall. I’m looking forward to that and already planning some insane things for it, and I’ll likely do a separate monthly article soon on what all that entails and my though processes there so stay tuned for that. In the meantime, I’ll be doing more hobby work and reporting back in a week or two.

In the meantime, if you have any questions or feedback, drop us a note in the comments below or email us at contact@goonhammer.com.