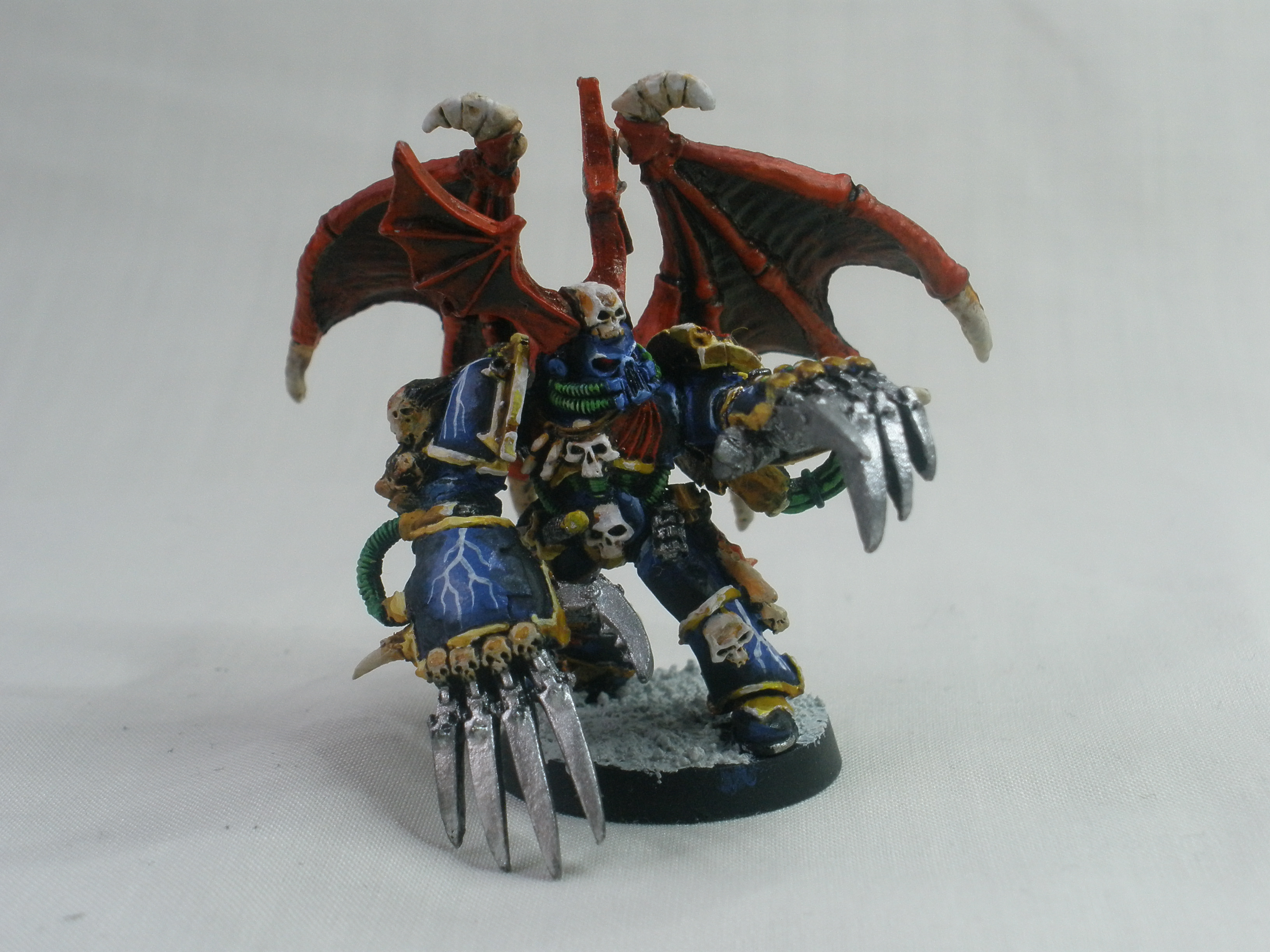 I was up in Boston this week, and despite being fresh off a weekend stuffed full of more hams than any in my life at the NoVA GT, I was still eager to get in a game against SRM and his classic/retro Ultramarines. So I packed up every metal Night Lord model I had (most of which were painted back in High school) and made for the Boston suburbs to face off against SRM’s lovely metal Ultras in a proper throwback game. We briefly contemplated using

My Army:
I chose to go pure 2nd edition on this one, taking as many of my metal minis as I could. I started playing back in 2nd edition right after the Chaos Codex came out, and Night Lords were my first army. They were the “default” Chaos army for second edition and I fell in love with their paint scheme. I’ve touched up almost all of the models in this army over the past 4 or 5 years, but almost all of them were painted in either middle school or high school.

Hell yeah. Look at that list. That is an army that is built to FUCK for third edition. The terminators can punch shit, the marines can shoot things, those bikes are gonna wreck house. And it’s got… *checks notes*… 8 command points. Oh lord.

This is a list designed to let people know that you still wet the bed at 30. Dreadnoughts? Assault Marines? pffffft. Also this list was over the agreed-upon points limit, because SRM is a jerk.

THE MISSION
Because we wanted to do something narrative using the terrain, we decided to play a game of Planetstrike from Chapter Approved 2017, specifically the Seize and Destroy mission. As part of the mission, SRM got a bastion with no guns and two bunkers to defend, and I was the attacker. That meant all my units were coming in as reserves, with infantry being able to deep strike. There were 4 objective markers, each worth 3 points except the one in the bastion, which was worth 6. Also, SRM got +3 Command Points as the defender in this mission.

In Planetstrike, the defender sets up the table, then deploys all of his or her units. The attacker arrives turn 1. Everything that’s infantry or can deep strike arrives via deep strike, and I forgot that their distance was reduced to 6″ (we used 9″ on turn 1, which hurt me later on), and everything that isn’t has to walk on like jerks. To offset the defender’s free buildings, the Attacker usually has more points (whomp whomp), and a bunch of Firestorm attacks, which are cool as hell. Basically to do Firestorm attacks, the attacker drops six markers on the table numbered 1 to 6, then rolls a die for each firestorm attack and for each one, everything within the correspondingly-numbered marker takes D6 mortal wounds.

I immediately spent 2 command points to get +D3 firestorm shots (result: 3), ending up with 9 total. SRM used signal jammers to move one of the firestorm markers 2D6″, but the 4 he rolled wasn’t far enough to get the marker away from the central bastion. The good news for him was that it didn’t matter: 9 Firestorm shots resolve and I end up wiping out the dreadnought, the assault marines, and putting wounds on the bunker and bastion. Then I spend another 2 CP to get D3 units automatically arriving from reserves, and go with the chaos lord, the raptors, and the bikes. Rolling reserves, I get everything but the Dreadnought, the winged sorcerer, and a squad of chaos marines on in T1.

That was about the end of any semblance of a good game for me. Almost everything possible went wrong. The Raptors and chaos lord plopped down in front of the scouts and killed one in shooting, then failed their charges. Both squads of Terminators fail their charges. The sorcerer cast warptime and prescience on the bikes, whose melta and plasma shots both missed the bunker they were targeting.

On SRM’s turn, the scouts shoot my chaos lord and score 3 mortal wounds. The rear terminators lose 4 dudes to shooting. Multiple times I roll 6 dice and get 5 ones, needing either 2-up or 3-up. The Raptors get shot to pieces by the vindicator and Sternguard. On my turn, the dreadnought continues to stay in reserves while the winged sorcerer and other chaos marine squad arrive. The rhino presses forward, the remaining raptors and chaos lord prep to charge, the terminators press forward. The sorcerer fails his psychic tests. the plasma gun on the bike explodes shooting a bunker on overcharge. The raptors charge the scouts and vindicator while the chaos lord and sorcerer charge tigurius. Both die in the aftermath, while the vindicator survives. The remaining two terminators behind SRM’s army charge the techmarine, only to do 0 wounds between them with 3 lightning claw and 2 power axe attacks, then are killed by his servo arm. The other squad of 4 terminators charges SRM’s tactical squad, then misses 7 out of 9 power axe attacks and fails to wound with the two that connect.

Look at these terrifying, useless boys.

These winged morons died shortly after this photo was taken

This squad spent all game missing its targets, then died like assholes

Turn 2 continued the pain, as all of SRM’s dudes fell back and shot mine in the face, albeit at a -1 to hit. The Chaos Lord was shot to death by sternguard. Ditto the Sorcerer, who failed 4 saves on 5 dice. All but 2 of the raptors were killed by Vindicator fire, and the terminators were shot down to a single model. the Bikes were dropped to 4 models.

Turn 3, the Dreadnought arrives, but I fail the Warptime cast on him so he’s stuck back on the far side of the table. The bikes continue to try and kill the bunker with 3 wounds left, only to miss again with the melta gun (It would cause 0 damage all game). The Terminator kills another marine and prepares to charge, while the bikes prepare to kill the techmarine. The chaos marine squad tosses a krak grenade that finally kills the bunker, and one marine inside dies. The bikes shoot the thunderfire cannon to death, then charge and *barely* kill the techmarine. The chaos marines charge the guys who piled out of the bunker, only to do 0 wounds. The CCW marines that survived sternguard fire (2 of them) charge the sternguard, and also deal 0 wounds. The terminator charges the remaining 2 tac marines, and deals… 0 wounds. 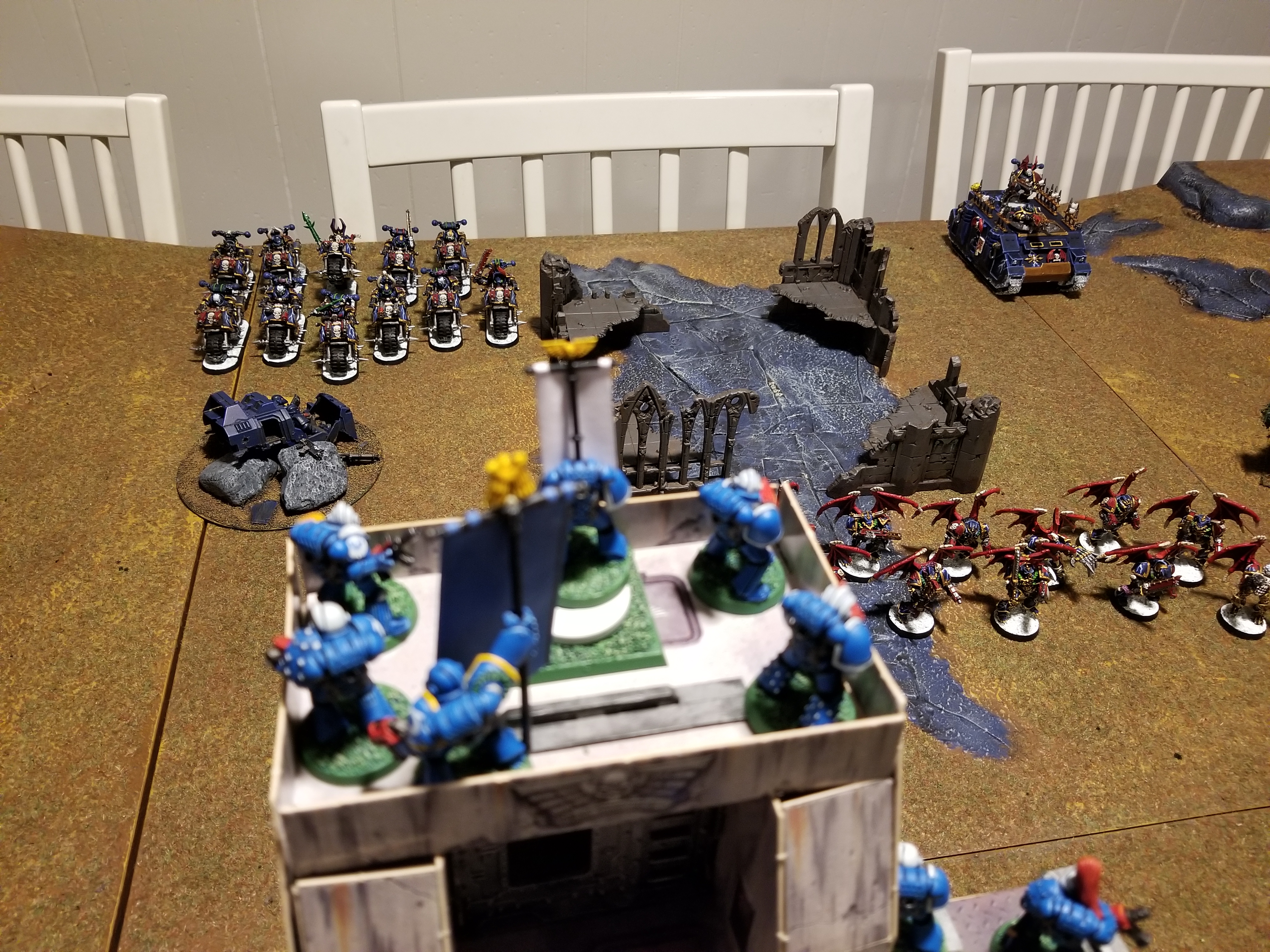 fuck these guys in particular

On SRM’s turn, he shoots the dreadnought and kills it with 3 lascannon shots. Thanks for showing up, dickhead. He falls back from combats and wipes out the bikes and last terminator, then charges and kills the last two CCW marines. Also he blows up the rhino. I’m left with… not much. The sorcerer on bike is still around, trying to cut up a bunker with 6 wounds left and failing 2 psychic tests every turn. Every plasma gun on the table has exploded. My CSMs finally kill a tac squad, but are staring down a full-health predator. I’m holding two objectives, worth 6 points to SRM’s 9 and he’s got Slay the Warlord. My Night Lords decide to do what they do best and flee. SRM wins, 10-6 in a game that was beautiful, but a complete disaster.