Wheel of Time Season One: A Streaming Masterpiece in Keeping It Rolling 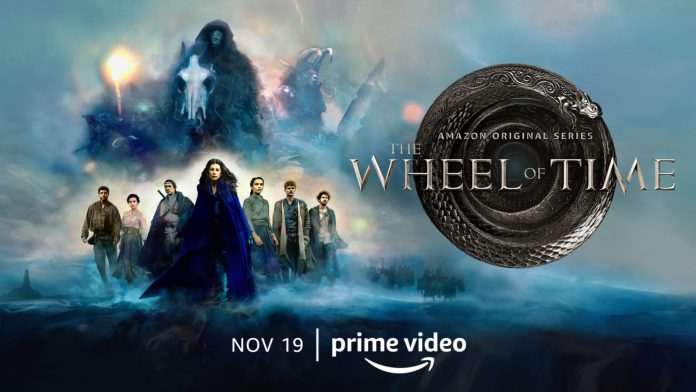 First I have to open with a condemnation of writer Jonathan Bernhardt, a cretin and a fool, who tweeted these two things in September of last year, which feels roughly like it was sixteen months ago:

my memory of the wheel of time is a writer of no particular talent doing an excessive amount of work to remix a bunch of tolkien and post-tolkien fantasy into something airport-saleable, and this basically confirms all of that. Shannara without the charm https://t.co/uzNlziQBRw

I, Jonathan Bernhardt, on the other hand have always held the correct opinion about The Wheel of Time’s first season, streaming now on Amazon: It’s fantastic. It’s better than The Witcher (certainly the second season). It’s the show that the execrable Game of Thrones walked for, in order that it could run. It finds in its general best comparison the Peter Jackson Lord of the Rings trilogy that its source material, at least for the first book, so knowingly and thoroughly ransacked for inspiration to the point where it ended up as commentary. It is a shame that whatever licensed product Amazon is putting out using that very same Tolkien estate license has pushed season two of The Wheel of Time to late 2022 despite first cuts already being in the hands of executives.

This is not going to be a review that catalogues each and every one of the show’s many divergences from that source material; content with that focus can be found in many other places across the internet, prosecuted by writers who care about that sort of thing, which I don’t. It is, however, worth highlighting one or two large ones by way of explaining my relationship to the material. I read the Jordan Wheel of Time novels as a teenager right up until I couldn’t stand the man’s loopy gregariousness, interminable plotting and complete lack of an editor anymore; I believe I tapped out somewhere in The Shadows Rising during one of Rand’s flashback vision-quests. No matter. In the tweets above, a lot of what you’re seeing is less a fair assessment of the product that The Wheel of Time season one would be, and more a reaction to my memories of the books. Specifically, I recall thinking, “if I watch this, I’m going to have to deal with so many scenes about that fucking dagger.”

That would be the character Mat’s evil ruby-hilted dagger, the one that he picks up in a creepy, dead, cursed city during the opening legs of Jordan’s first novel The Eye of the World, when he’s still broadly aping Tolkien’s flight of the hobbits from the Shire. Mat is one of Rand’s motley band of young friends and possible-Dragons Reborn from the sleepy town of Two Rivers; he’s sullen and angry and violent and gets laid a lot because farm girls love a bad boy. The dagger had a lot to do with this side of early Mat; it held a powerful, corruptive sway over the young man, its influence lasting by hook and crook until some time in the first part of the third book, The Dragon Reborn. It is an infuriating character device that was at least in my memory mainly there to enable Mat to whine, complain, have visions, faint, complain some more, engage in dramas of misunderstanding, whine about those and so on. I was contemplating how much of this show I could realistically tolerate given that whatever its virtues, they were going to have to coexist with pensive shots of Mat moodily gripping a dagger for at least two seasons.

In the show, the dagger is introduced in episode two, and dealt with permanently by the middle of episode five. It’s not outside the realm of possibility that it returns in the hands of another character at some point in the second season (though that character has also undergone some significant revision), but as far as Mat is concerned, his bad moods were fully authentic and informed purely by how much he’d come to mistrust his friends and his new life all by himself. This is the crux of what showrunner Rafe Judkins and his team have done: applied a ruthless paring blade to the work of Jordan (and Brandon Sanderson, the respected novelist hired by Jordan’s estate to finish the series after his passing and who consults on the show) to bring it down to something manageable to film and, more importantly, relatable to the human experience. There is nothing worse than an interpersonal conflict that exists even in part because something as silly as an evil dagger is making you do it. It cheapens the stakes and makes all the consequences unearned.

A friend once described the experience of reading the books, approvingly, as sort of like watching wizard CSPAN, all these people going about their fantasy world business in their fantasy world lives, and occasionally the plot would slightly intrude from offscreen, concern the characters on the page for a moment, and then it would recede. I both respect that description and find a preference for it deeply insane. The show has no time for such pacing. Characters from later seasons are pulled into the first and mashed together with others where themes and biographies fit; like the dagger, many plots that ran much longer get compressed in ways that are likely too spoilery to detail in full. The show has eight episodes to do its version of the first book, and it bangs right through them.

One of the great problems with The Witcher, the other great prestige fantasy streaming show of our time, is that (especially in its second season) it is simply not worth watching when one of the three leads, Geralt, Ciri, or Yen, isn’t on screen. The Wheel of Time has no such issues. There is no single performance that hits such absolute heights as Henry Cavill’s Geralt of Rivia — though despite my past, uninformed slander of her, Rosamund Pike’s Moiraine Sedai comes very close — but there is also no situation like the unfortunate Mimî M. Khayisa found herself in with her character Fringilla: given absolutely nothing to do but walk places and nothing to say but political exposition, at length, until the second or third to last scene of the season when she’s finally permitted to let loose. Every character in The Wheel of Time gets their moments, even the slightly-underserved Perrin, and every character uses those moments to keep it moving.

A way the show is not in conversation with Jackson’s Lord of the Rings and hews much closer to The Witcher is, of course, budget and scope. I am far more inclined to be forgiving here than some might, mainly because when I like something I care less about how good the CGI tricks are to keep me invested, and I’m pretty sure that’s a normal response. At the very least they lean into practical effects where they can; GQ ran a piece on this subject a few months ago detailing the prosthetics they used for the trolloc costumes and that yes, they really did build an entire Two Rivers just to burn it down in the first episode. One thing not directly touched on in the piece is the way that, say, the offensive spellcasting used in episode four’s fight with the army of the false Dragon Logain Ablar, is modelled to resemble real-world artillery fire into enemy ranks rather than conjured fireballs or ice blasts. Not only does it look better for cheaper, but it’s far more visceral, and all you really have to do is safely huck a few guys in the air and do some compositing in post, both things with long, proud lineages in the Western film tradition.

There have been some hiccups; obviously some fan backlash online due to changes from the source material, most of which I can’t identify with in any way (the one change I thought I would agree with them about — having Perrin accidentally kill his wife during the opening attack on Two Rivers — I ended up finding both well-handled and fairly essential to the character). Brandon Sanderson has made some noises on his personal blog fretting about the show’s tone being too dark, but while I very much agree with him that the show should not become Game of Thrones-lite in what it attempts to convey or portray, I find the specific complaints — here, on episode three, that the pacifist Tinkers’ dogs shouldn’t be depicted eating roadside carrion (?) or that Nyaneve actually baring a blade on Lan, while logical, makes her unlikeable (???) — to be the sort of myopic zoomed-in-too-close worrywarting of lifelong fans too attached to the material to rationally judge how those new to it will react. The Tinkers’ dogs not respecting their pacifist ideology and the Tinkers not caring is good. It shows the Tinkers aren’t weird hippie-dippies who don’t understand the difference between animals and moral actors. Nynaeve making sure Lan knows she’ll kill him if she has to is also good. It makes her a person of serious consideration, and makes later events between them in the season have more weight. All of this stuff I have no problem with.

More concerning is the fact that Mat’s actor for season one, Barney Harris, has departed the project for unspecified reasons and will be replaced in the second season. Obviously the producers are making the correct noises about how good the new guy (Dónal Finn) is and how you won’t even notice, but Mat was a strong point in the casting for me — not as inspired as Josha Stradowski’s Rand al’Thor, a man with more than a little bit of Hayden Christensen’s Anakin Skywalker in him both in his acting choices and his actual face, but very good. One supposes it’s good the change was at least made before they got too deep into this thing; the showrunner Judkins plans for it to go eight seasons long. If they’re all as snappy and well-considered as this one, and don’t get themselves bogged down in the cruft of the source material — instead cutting through to the characters that captured readers and the conflicts between them, the world, and the Wheel — it’ll be a hell of a ride.