32 Years Later, is HeroQuest More Than Just a Nostalgia Play? 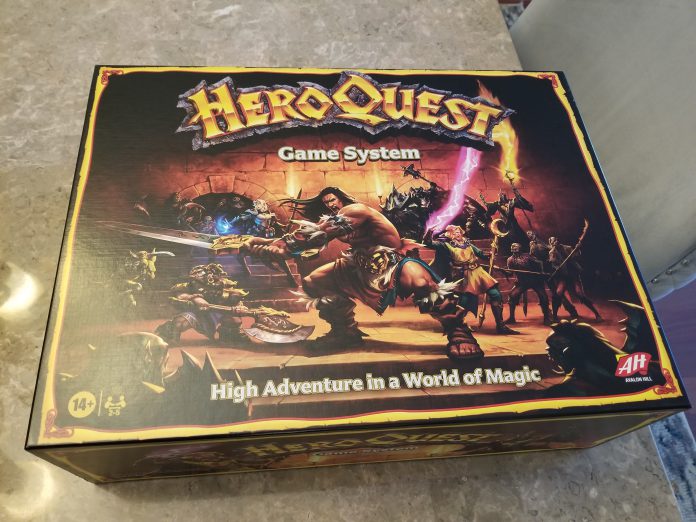 Here’s something you need to know before I start this article, Dear Reader: I am a complete mark for something like this. My hobby and nerdgames journey basically began with HeroQuest back in 1990, when I first played over at a friend’s house. Eventually I’d get a copy of my own and one summer my dad and I would buy a bunch of Testor’s paints and paint up every one of the models in my set. The Slambo-style Chaos Warriors were the spark that ignited a decades-long love affair with the Citadel Chaos range and lead me into Warhammer.

I don’t have most of them these days, but I did recently find one of my first models digging around my parents’ house – the Heroquest Dwarf was one of the first models I ever painted.

HeroQuest is the game responsible for my entry into Dungeons & Dragons and Warhammer 40,000 and likely was for many other kids coming up in that era. I’ve played it many times in the years since—every now and then someone will bring it to a group gathering or on a vacation house trip, and we’ll break it out and play through as many quests as we can. It’s always a good time, but in some ways it’s like playing the Dungeons & Dragons Arcade game or Gauntlet Legacy—a fun dungeon crawling experience that scratches that co-op itch but that we seldom mind leaving unfinished. We never make it past four or five quests over a couple of days.

So I was pretty excited when I saw the Hasbro Pulse [Kickstarter, but Hasbro keeps the fees] announcement for a remake of the game, complete with the first two expansions—Kellar Keep and Return of the Witch Lord—as well as some stretch goals. I’ve always kind of regretted not keeping my old copy, and at some point I suspect this game will be a great way to introduce my son to nerd games. As soon as we finish tackle that whole “learning to read” thing, anyways.

About one year after my order—and this is pretty much how these things always go, I order them and then they take so long I forget about them—the box arrived on my doorstep, including not just the items I expected but also the un-achieved stretch goals. More on those in a bit. 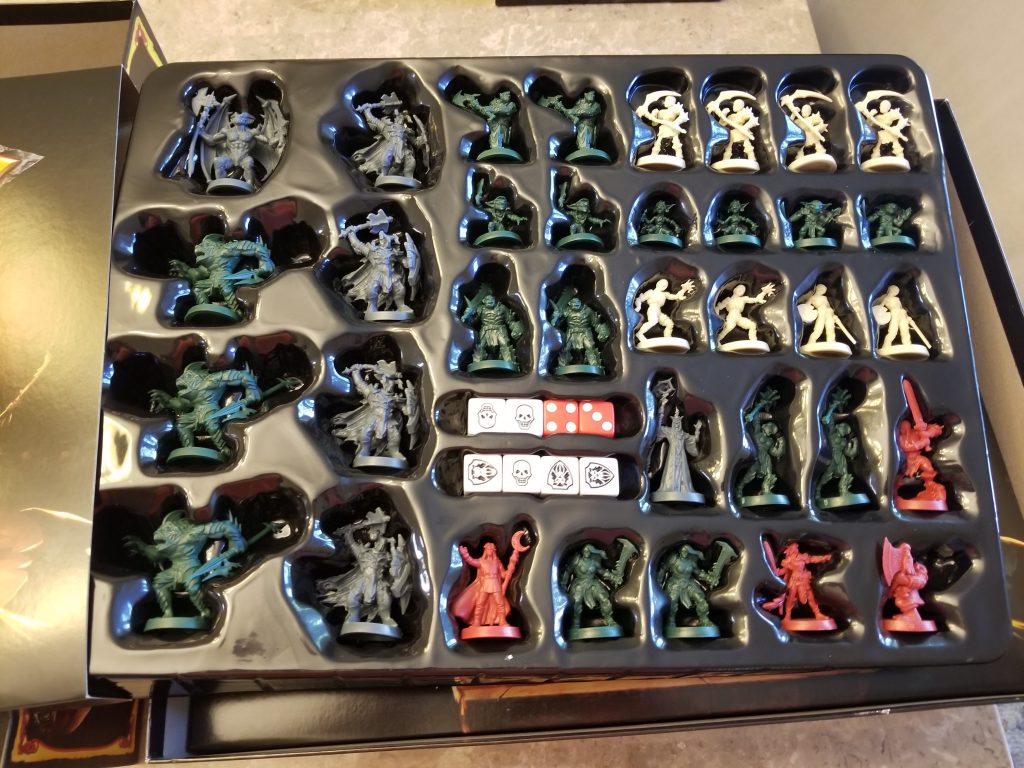 The box itself is huge. Almost unmanageably so. Part of that is the figures, which are huge and made of a slightly flexible plastic. It’s definitely a bit more toylike than I expected, and the details are softer. They’ve dropped the old Citadel/Warhammer aesthetic for something similar but distinct. While they generally look pretty good, they’re lacking on the really fine details, most likely because the plastic just doesn’t allow for them. Faces tend to be not quite as detailed as I’d like but if you hate painting eyes that’s good news. It also means some pieces are going to be bent out of shape when the box arrives, and getting them back in place—especially without breaking the model—is very, very difficult. I’d have much preferred a more rigid, hard plastic for this. [If the model is bent but not broken, you can dip the piece in near-boiling water. This will reset the shape which you can lock-in by next dipping the piece in cold water] 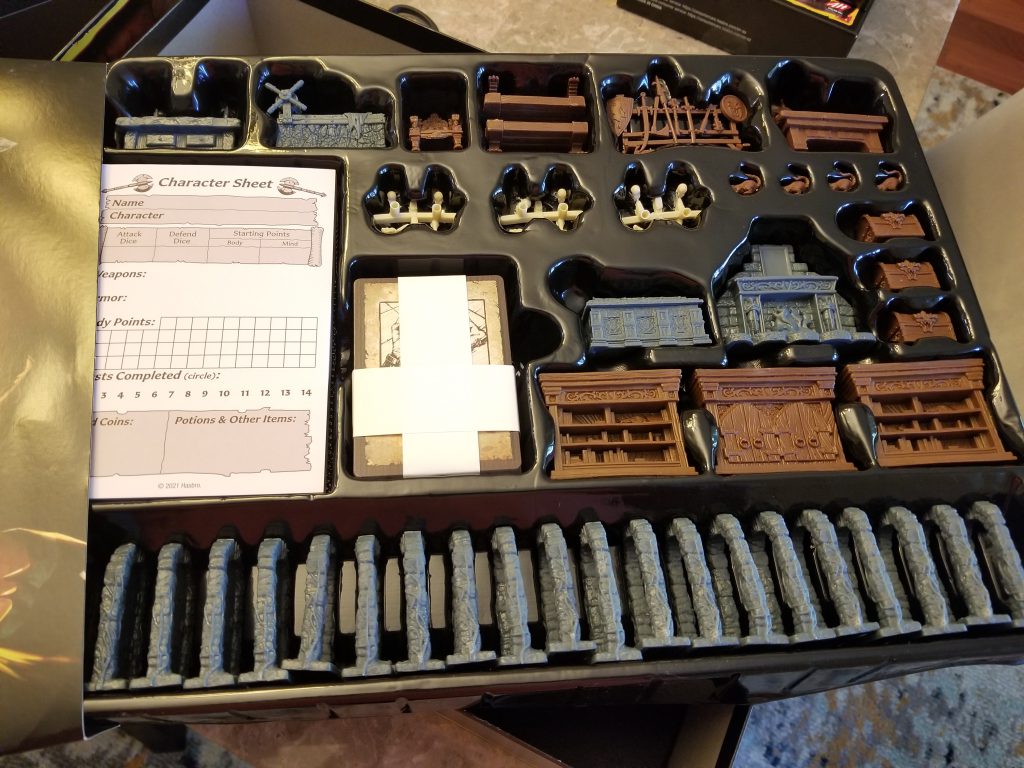 One of the cool things about them is that the figures come attached to what are pretty much exactly Citdael 25mm bases, which means that adding my own models in the future will be pretty easy. And yes, I’m liable to do just that. 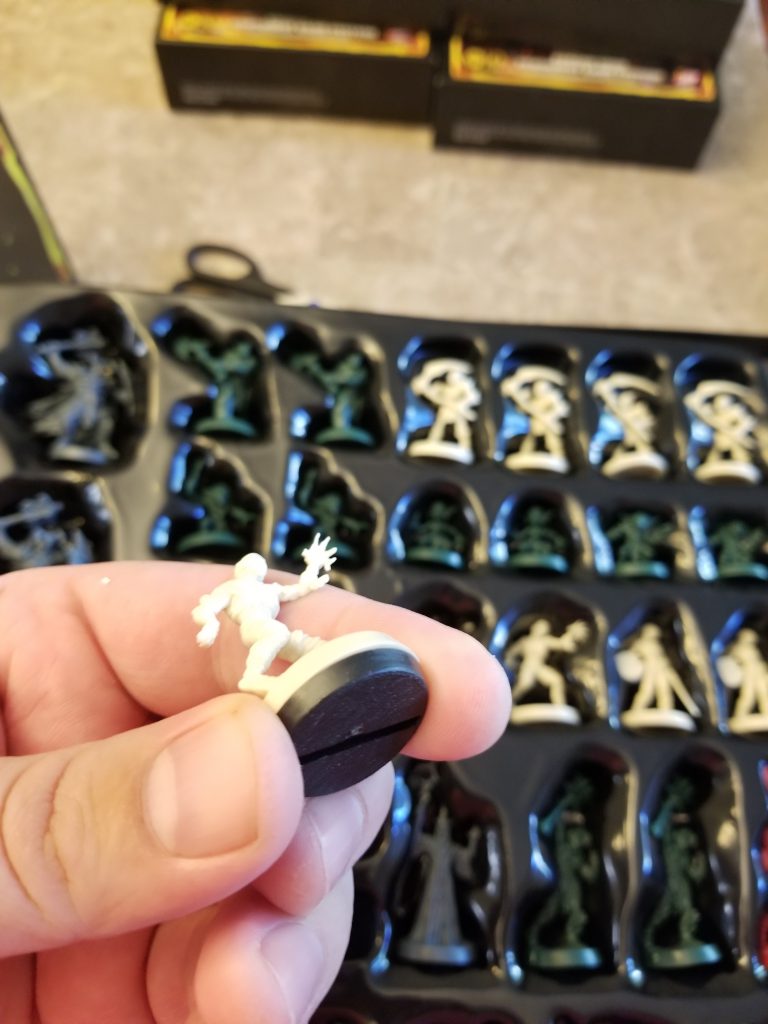 Overall the new stuff looks great, and the quality of the supplied materials is very high— there’s no cardboard terrain here. The board has good heft to it, and they’ve supplied more cards than there used to be, swapping out the big cardboard armory/store display for extra cards representing the equipment you could buy. The cards look great too; I’ll miss the classic art we had, but the new stuff looks great. 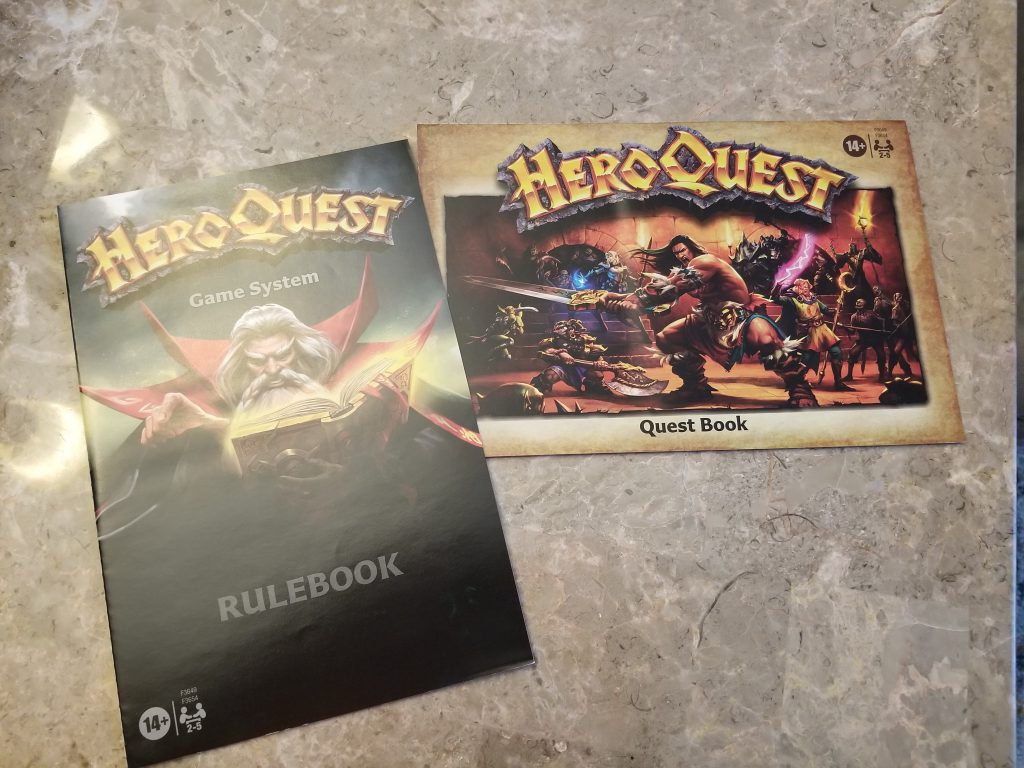 As for the game, well it’s pretty much exactly the same HeroQuest we had before. The quest book for the core game, as well as those for the Kellar’s Keep and Witch Lord expansions, are identical to their original versions.

If you’ve read this far and still aren’t certain what the game is or how it’s played well, I’m sorry I rambled this long without getting to it. HeroQuest is a board game for 2-5 players where one player takes on the role of Zargon, the dungeon master, and the other 1-4 players take on the role of heroes, venturing through various dungeons to fight monsters, find treasure, and ultimately save the day. The different quest books offer serialized adventures, with some loose storylines that weave throughout.

The game plays like a kind of proto-Dungeons & Dragons, or a board game version of Gauntlet: Legends. There are monsters, gold, equipment, spells, and character classes, not to mention traps and hidden treasure, but there’s no XP to keep track of. Your character – chosen from one of the four core classes of Barbarian, Dwarf, Elf, or Wizard, primarily improves in capability through the equipment you buy for them and the artefacts you find. This of course, makes it the perfect gateway drug for future nerd games, so if you’re looking to try and convince someone to make the transition, it’s not a bad jumping off point.

It’s pretty easy to sit down and play a game or two of HeroQuest in the span of an evening, particularly when players are familiar with the rules. The new rules are the same but streamlined, making it much more clear what actions players can do on their turns, and once you get the hang of those six actions, the game becomes a fun co-op adventure as players try to figure out the best way to use their varied skillsets to make it through each dungeon. The game really shines when you can marathon 3-4 adventures, or when you have a regular group to play with. Being able to regularly meet up and continue your adventures really hammers home the “DnD-lite” aspect of the game.

The Mythic edition of the game comes with a host of additional minis, more cards, some new character classes, and three new quest books written by nerdgame celebrities. The new quest books are all pretty solid, and do a decent job crafting a story without falling into some of the traps that later expansions for HeroQuest did, like creating challenges that were insanely difficult (I’m looking at you, Frozen Horror). They’ve all got some interesting hooks that make them feel even more like RPG campaigns, and overall I think that’s a good thing. Manganiello’s Crypt of Perpetual Darkness and Teos Abadia’s Spirit Queen’s Torment quests feel like something you could pick up with a new party, while Stephen Baker’s Prophecy of Telor (the most inventive of the three quests by far) feels more like something you’d want a veteran party to attempt.

If you have a friend who doesn’t mind playing Zargon, HeroQuest is a pretty fun time. It’s pretty easy to pick up and it’s a solid co-op adventure that’s great for the RPG-curious crowd or just some people who want to kick down doors and bash monsters in a dungeon crawl. The new set is really just a prettier re-pack of the old set until you get to the Mythic tier content, but the game itself still holds up well enough that my group would occasionally break out our 30 year-old box and play with that. We’re already planning on playing with this new set and I’m looking forward to painting the minis and introducing the game to my son in a few years.