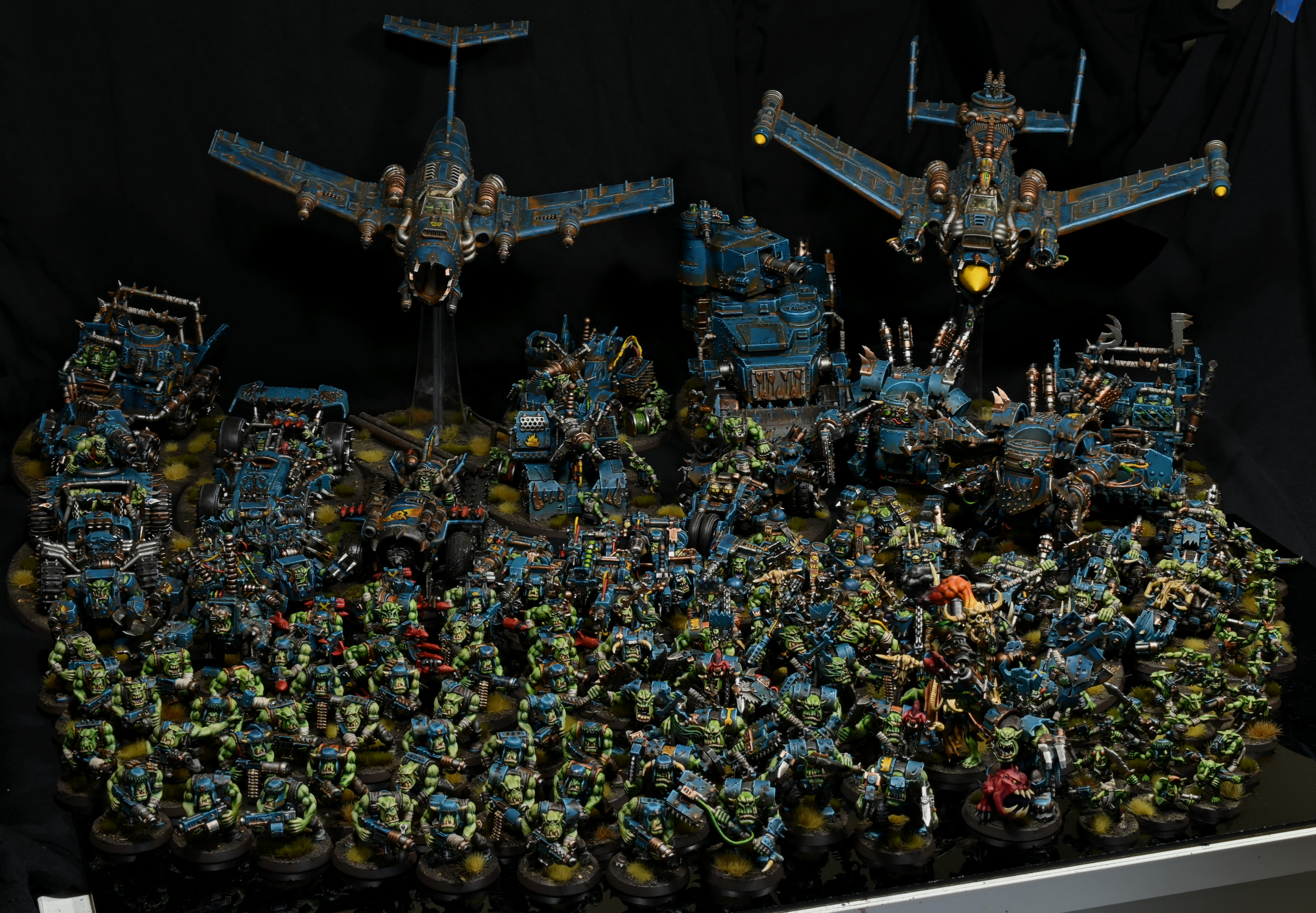 Finishing your own army is core to the Warhammer 40,000 hobby. In our Army Showcase series, Goonhammer contributors take a look at the armies we’ve been collecting for years, and the new ones we’ve just finished – what drew us to them, why we keep building and painting, and how they play on the table. This time we are taking a look at Rockfish’s orks!

Honestly I really didn’t have a good reason to start this army, partially it was because I wasn’t feeling like working on any of my existing armies (at the time, Tau, Salamanders and Tyranids) but it’s probably more that I was feeling the tug of a fancy new book coming as this was about when the 8th book was announced. This was the start of my bad(?) habit of randomly starting armies on a whim, can’t be too fussed about it as this army is a lot of fun to paint and play!

At the time I was still a fairly slow painter, so it took me a few months to get anywhere, and unfortunately I didn’t get to play them before there was a substantial interruption in the spring of 2019. Not to get too far into details, but I had a biking accident that resulted in a large proportion of my spine being turned to splinters along with a couple of breaks in my painting hand. This was a combo which resulted in a few months of pretty much being unable to do anything at all.

Eventually I was well enough that I could use my painting hand again and since I really needed a distraction from my back injury, I tried to get back to painting. Unfortunately this did come with some heavy restrictions, since I was still in a back brace and had limited mobility. Amongst other things, I couldn’t make use of my airbrush due to accessibility of my normal set up and its not like I haul it around to somewhere else. So I ended up hand brushing the rest of the army, this included both my fliers and quite a number of other models. As it turns out, this takes a long time, especially when you also have to work around injuries!

By the time I got the army to roughly its current size, I was finally well enough to start heading out to the game store. Unfortunately full size games were still out of reach due to not being able to stand up that long, and by the time I was finally starting to be able to get normal games in with some kind of regularity it was March 2020. There’s some kinda cruel irony that after a year of being either bed locked or otherwise limited that covid would hit…

Nonetheless I still got some games in with the army at various sizes, and as bad competitively most of my lists were they are a absolute blast to play! I tend to lean towards pretty mechanized with orks as there’s something pretty rad about stuffing the trukks and battle wagon with a bunch of orks and throwing them at stuff. I even got a chance to try them once in 9th, mind you this was only a 1k game due to limits imposed by lack of terrain at the time, but its pretty fun running some buggies and trukks around the board.

I have basically spent the last year working on painting armies with 9th edition books (like my Admech and Necrons), but with orks being close at hand it is well past time for me to start getting back into painting them again!

This will be my third round of revising this colour scheme, as I simplified it a bit after my injury. I think I have made a lot of progress with both speed painting and general techniques so I think this will turn out pretty well. Subsequently I do plan on doing a updated version of my HTPE, and I will probably go into more detail there as to the changes. If you want to look at my old recipe in the mean time, it’s written up here along with a bunch of other fantastic schemes!

For a quick summary, I mainly focused on keeping the colours distinct and fun to paint. This meant stuff like giving each colour a more distinct role (yellow is glyphs, red is stuff that can explode, etc…), and using paints with better coverage for the base coats. I also tried to make the less important bits a more subtle so as to not distract from the key details.

I am only a couple of units back in so far, but its a lot of fun to be back on them again! I have a bunch of the existing kits I want to work through, but I am trying to restrain my excitement a bit till I know how I want to load out the more customizable units. In the mean time I will continue to distract myself with the monobuild stuff I haven’t done yet.

At time of writing we are just after the Octarius preview, so we only have some teases of the 9th ed book from the rules perspective, but oh boy am I hyped for new boyz! I am not 100% on the idea of the chariot, but I am definitely willing to give them the benefit of the doubt until I see it in person. Worst case, I am sure I can kitbash it into something I love! Stuff like the new kommandos are just amazing, it’s fantastic the quality of kits GW is able to come up with these days.

As for the book itself? I am sure it will at the very least be decent, as GW seems more inclined towards the strong and reasonably flavourful side of things for the recent books. Given that the boxset is coming up for preorder in a week or so, I expect we will know soon enough!

I am quite happy with how a number of the simple kitbashes I did turned out in this army, particularly the Nob With Waaagh! Banner.

Unfortunately I was not that creative with most of my army, so the other changes were pretty minor. Mostly limited to stuff like this Tank Busta Nob and somewhat modified trukk.

As for the rest of the army? They are all pretty much just as they come in the box, but I am still really happy with them!

I still have some big gaps without stuff like Kans or any of the really big stuff, but I will get to that sooner or later I expect!