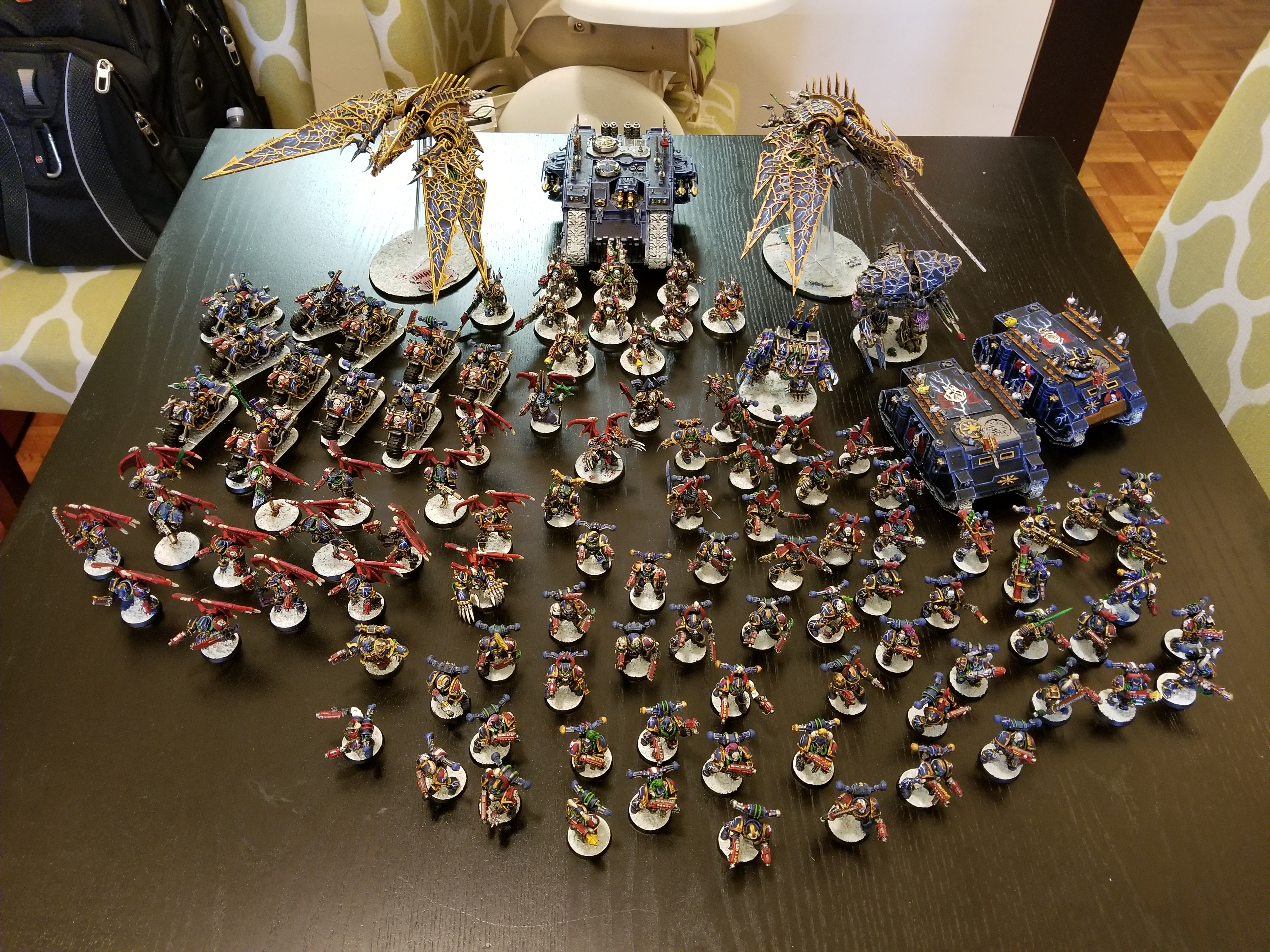 The painter: TheChirurgeon
The Army: Night Lords
Points: About 4,000
Collected: Started back in 1996, then added to in bits and pieces over the last 23 years

It all started here: 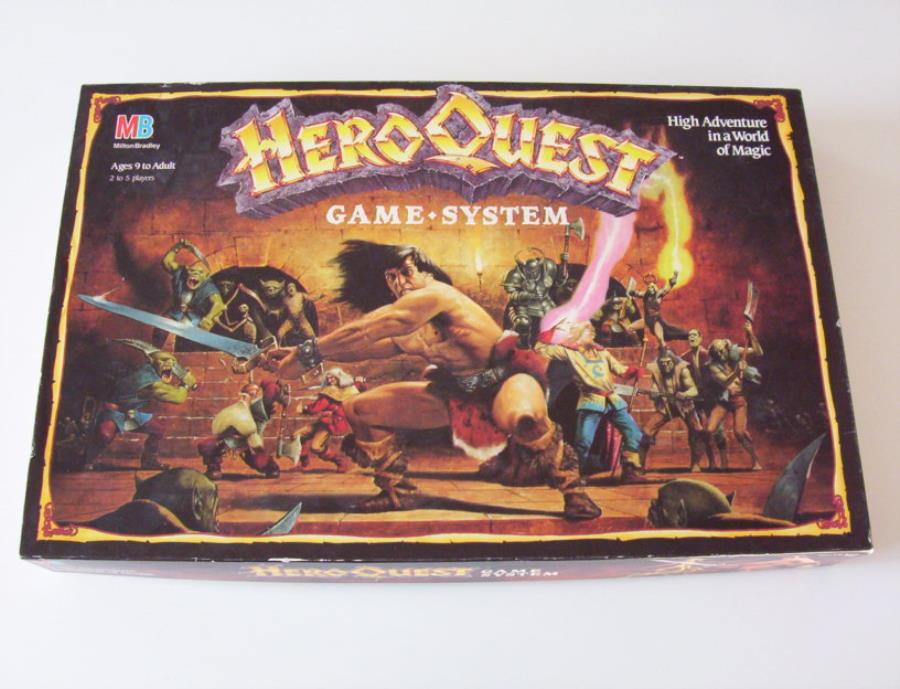 Specifically, it started with this guy: 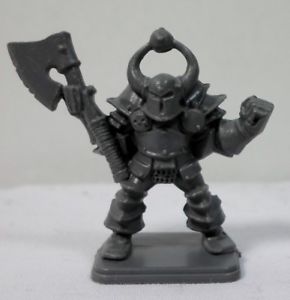 I was maybe 8 years old when HeroQuest came out and it was absolutely the coolest shit ever. I loved the models (especially the Chaos Knight), I loved the setup, the GM-vs-the-players style that would later be the hook that got me into Dungeons and Dragons. I didn’t play a single game of HeroQuest with my friends until well into college, but I adored the box and the cards and the miniatures. I was already into video games and comics but HeroQuest may have been singlehandedly responsible for my full nerd transformation into someone who plays D&D and paints models. In contrast, my dad has never liked games. I think it’s because he hates to lose too much. But he did like painting models (usually airplanes) enough to sit down and paint HeroQuest models with me, and so we painted the entire set.

About two years later, my family moved to Italy (we were there for about two years). Because I was into comic books and played Magic: The Gathering, my parents chose to move us into a house down the street from a local comic/hobby shop. It was pretty sweet: I played a lot of Magic, read a lot of comics, and learned Italian by basically spending all my free time palling around with a bunch of other yabbos. Many of them played Warhammer. And as fate would have it, that was right around the time this bad boy came out: 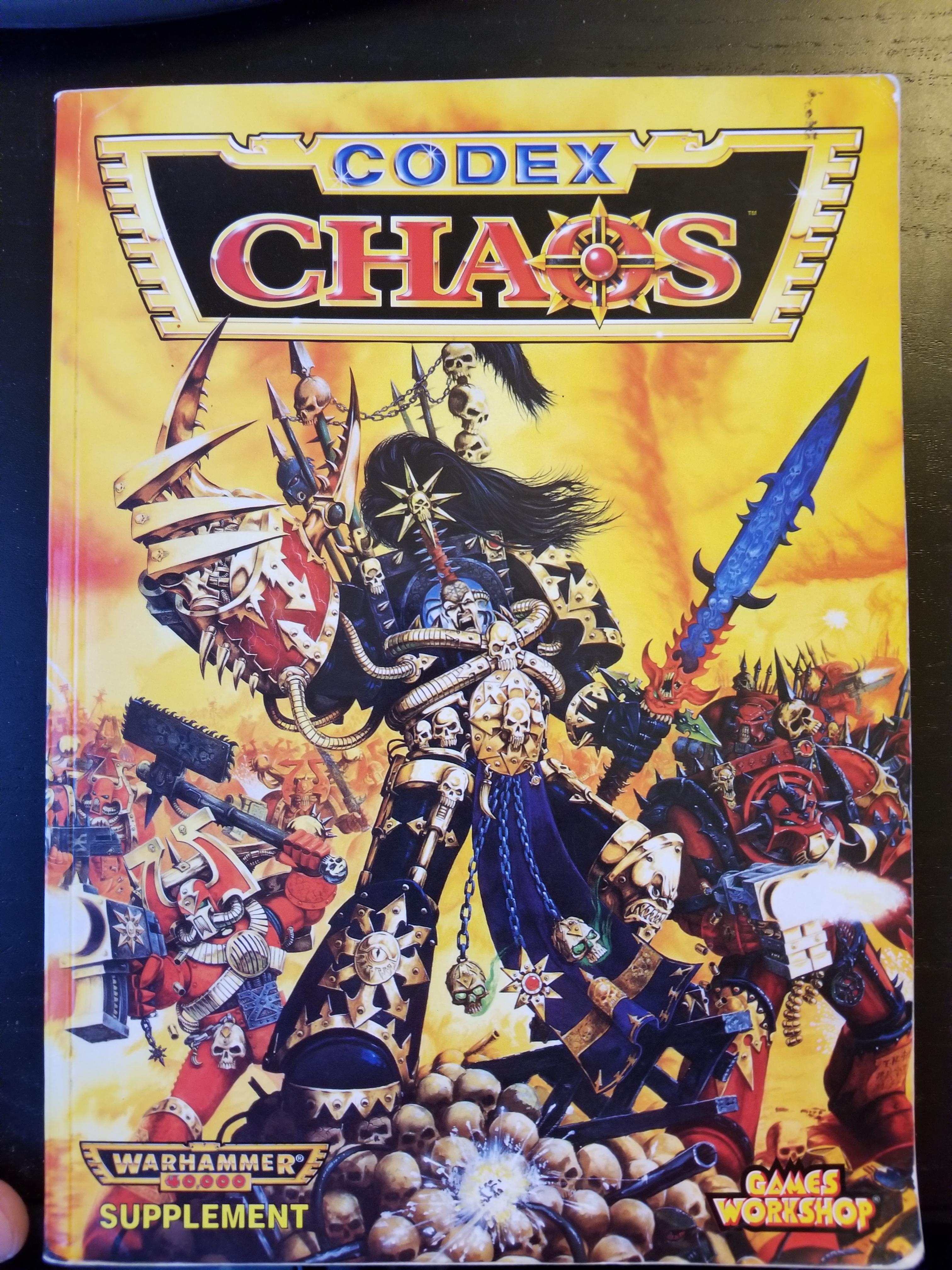 I fell in love with Chaos Space Marines. I bought the Codex. My first Warhammer 40,000 model was a metal Berserker on a Juggernaut. For Christmas that year, I got the 2nd edition starter kit, and then Dark Millennium shortly after. I loved everything about the Chaos Space Marines and at the time, my favorite faction of them were the guys who got the ‘Eavy Metal studio army, the Night Lords. I started collecting Night Lords in 1996 and built onto the army over time. I brought them back with me to the United States and played 40k in high school, swapping out some older models and expanding the army as Chaos got its amazing third edition codex (the good one, not the first shitty one).

Over time, I’ve replaced a lot of the oldest models and repainted many others. Among my Chaos armies, the Night Lords are easily the oldest, and their paint jobs reflect how my skills as a painter have grown over the last 20 years. They’re definitely a mixed bag for me: I love some of the old models and I remember the army fondly, but I absolutely hate looking at their paint jobs now. Also like 3/4 of the army are metal models that weigh a shitload and chip constantly. I’m not as big on Oldhammer as SRM, but recently I’ve come around on my Night Lords as a fun retro army to keep around. It’s certainly too much work to redo the whole thing with new models at this point, so I’ll likely keep them as-is for now, though I may add on the occasional new unit.

So here’s the thing: I’ve got about 4,000 points of Night Lords, but they are incredibly bad in their current state. I went all-in on Fast Attack choices back in third edition, where one of the Night Lords’ things was swapping out Heavy Support choices for additional Fast Attack options. This means that the army is incredibly unbalanced, with very few ways to deal with heavy armor. I also retooled it for 7th edition with lots of meltaguns to mitigate that weakness, which are now totally worthless. I did add a couple of Heldrakes though, also for that sweet 7th edition meta.

They’re all painted in a roughly 2nd edition style, with bright green piping. That’s a trend I’ve kind of kept up across all of my Chaos Marine armies.

I’m mostly done with these guys for a while. I have some additional projects planned for them, but the current plan is to rework my Black Legion army (more on them in a future post). I recently had my buddy Merton recast some 2nd edition Tyranid Gargoyle wings so I can use them to make Warp Talons. I’ve also got a handful of metal Chaos Marines sitting around that need to be painted who aren’t in the army yet, and I’ve got Night Haunter and a Night Lords Contemptor waiting to be scrubbed clean of release agent somewhere. So generally, my future queue for these guys looks like this:

Then, if I’m feeling really cheeky, I’ll try and source some old metal Chaos Cultists to add a squad of retro mans to the army. They’re basically stuck in Retro mode now.

I have a lot of Chaos Space Marines in this army. About 50, give or take, not including the heavy weapons. Most of them have bolters, but about 20 have bolt pistols and close combat weapons. They’re a mix between older, metal 2nd edition models and 3rd edition plastics (including more than a few conversions of the plastic Berserkers who, for a time, were the only plastic Chaos Marines kit). 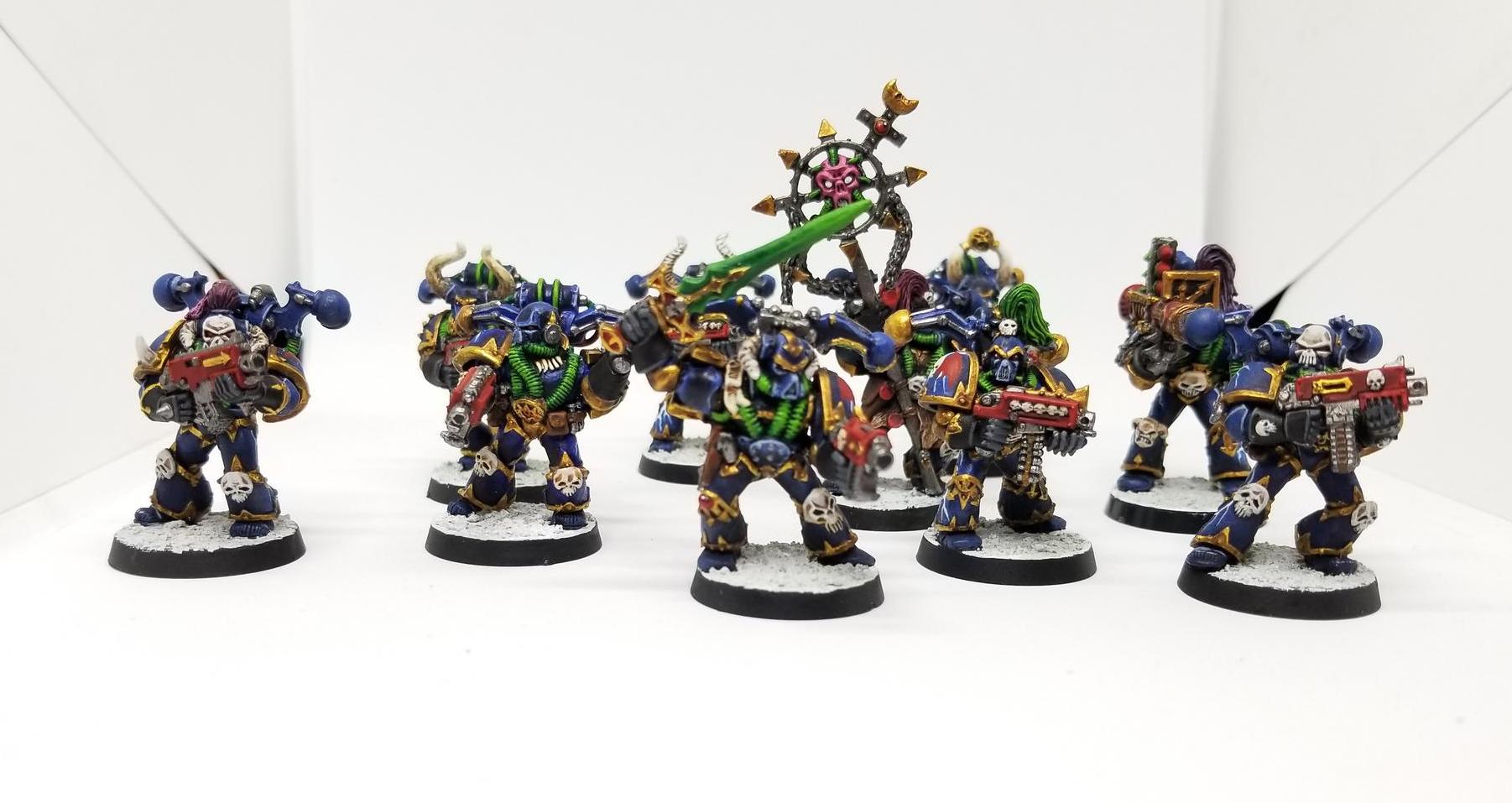 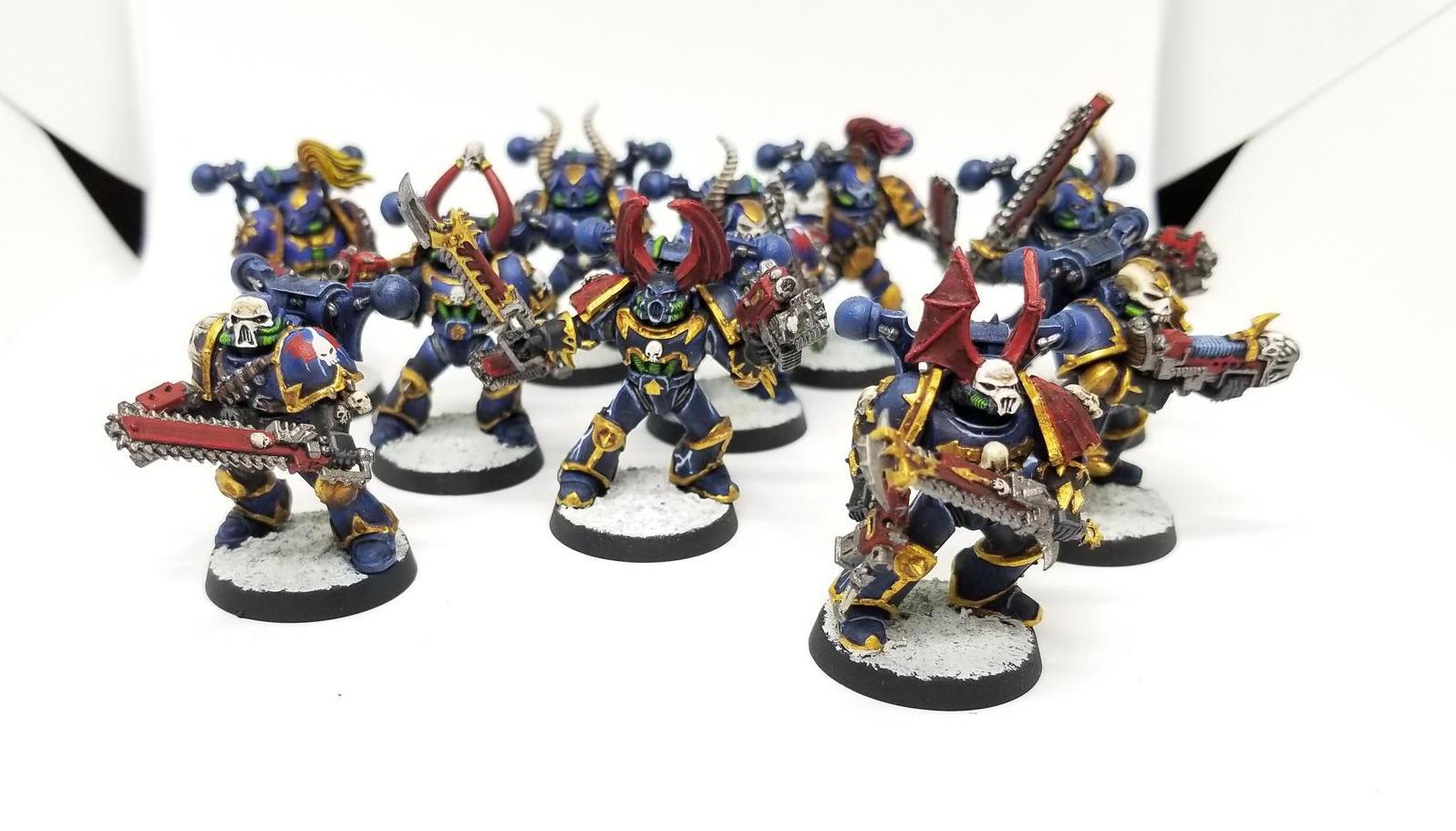 There are two Rhinos in the army, so my boys can ride around in style. 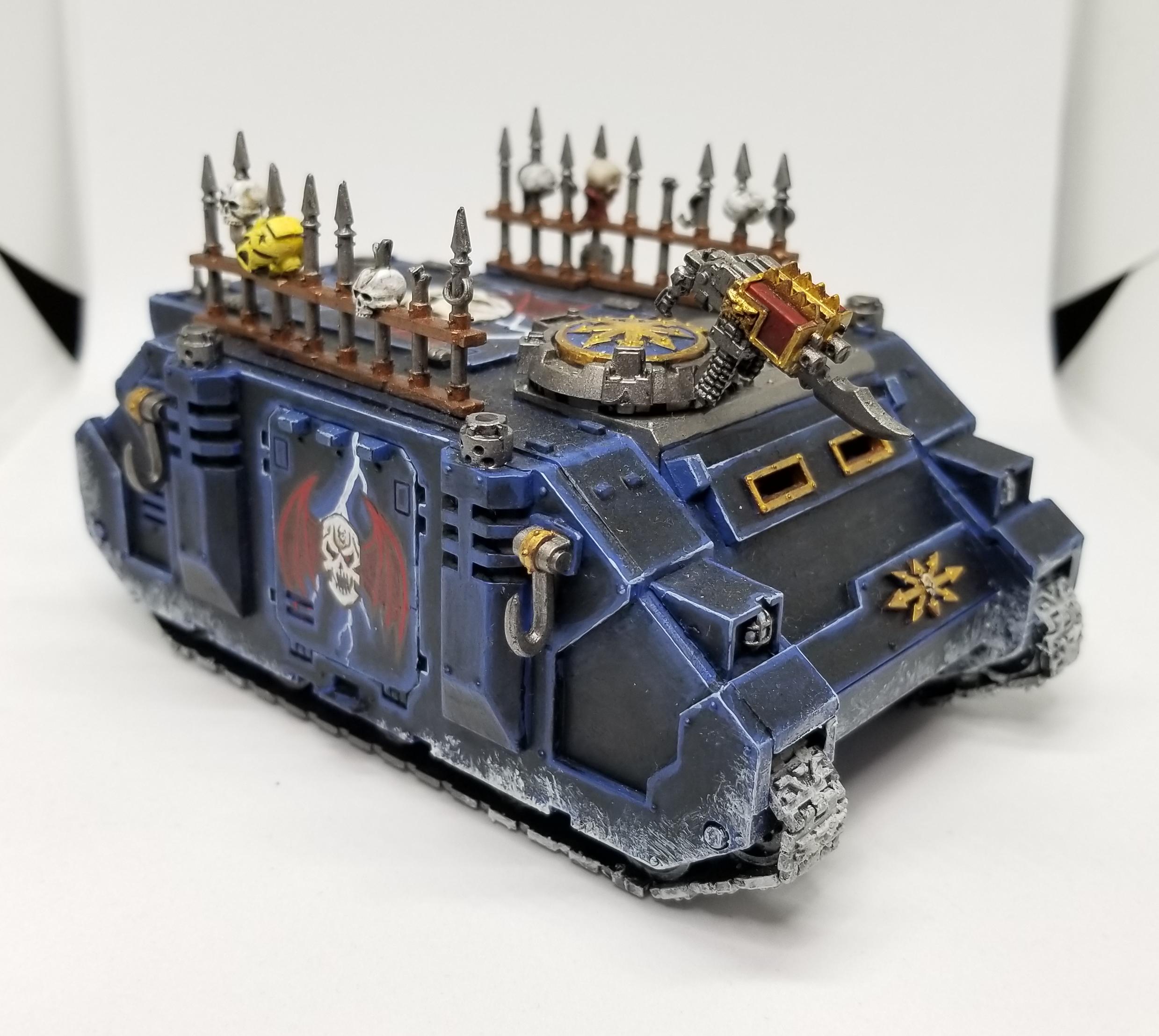 There are a lot of Fast Attack choices in the army. I’ve got 10 bikes, but the real stars are the raptors. I’ve got 15 in total, and all of them use the wings from metal 2nd edition Tyranid Gargoyles. 10 are based on the older early 3rd edition metal Raptors, while five are from the second generation of metal Raptors. Their favorite activity is falling over and chipping. I hate these fuckin things. 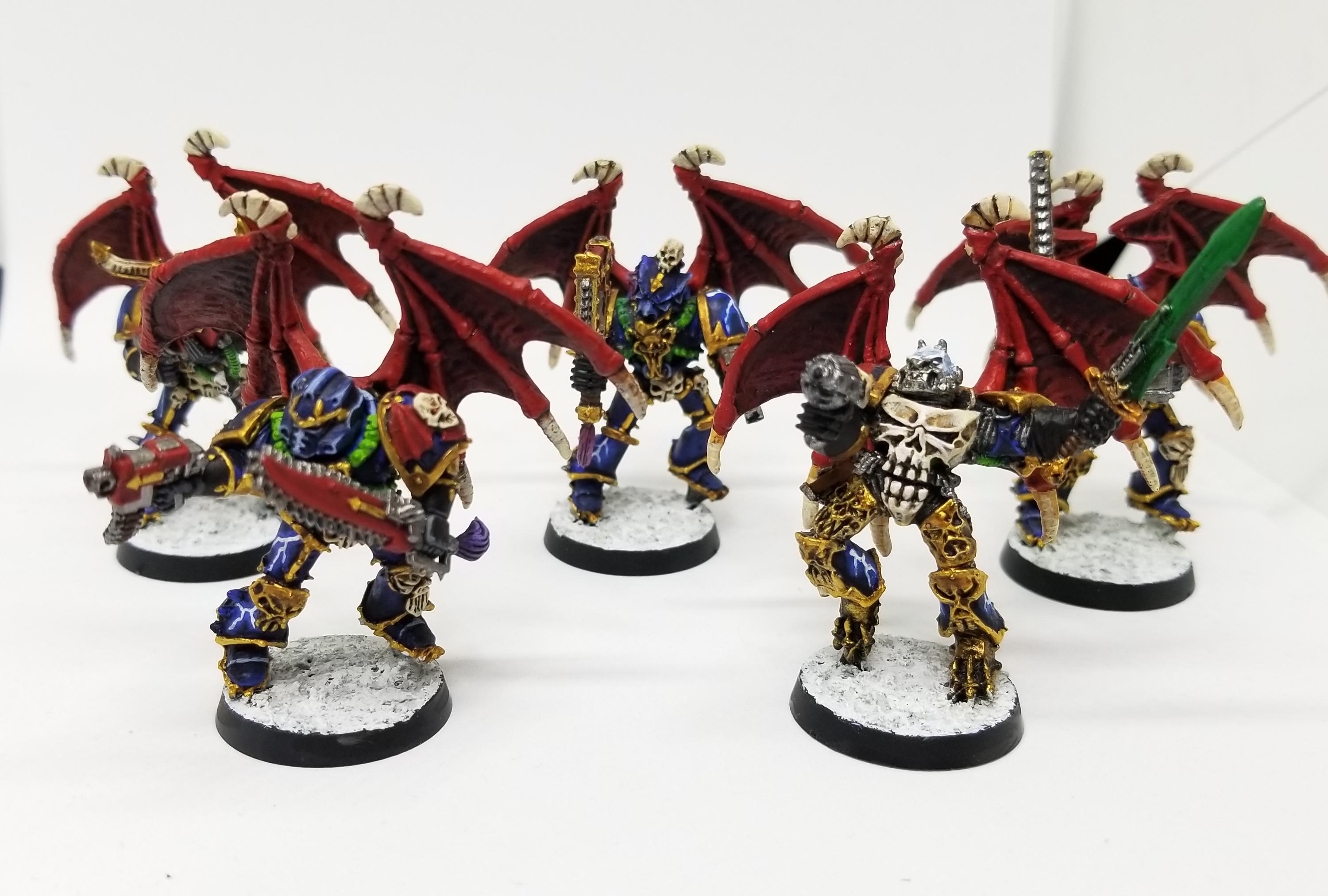 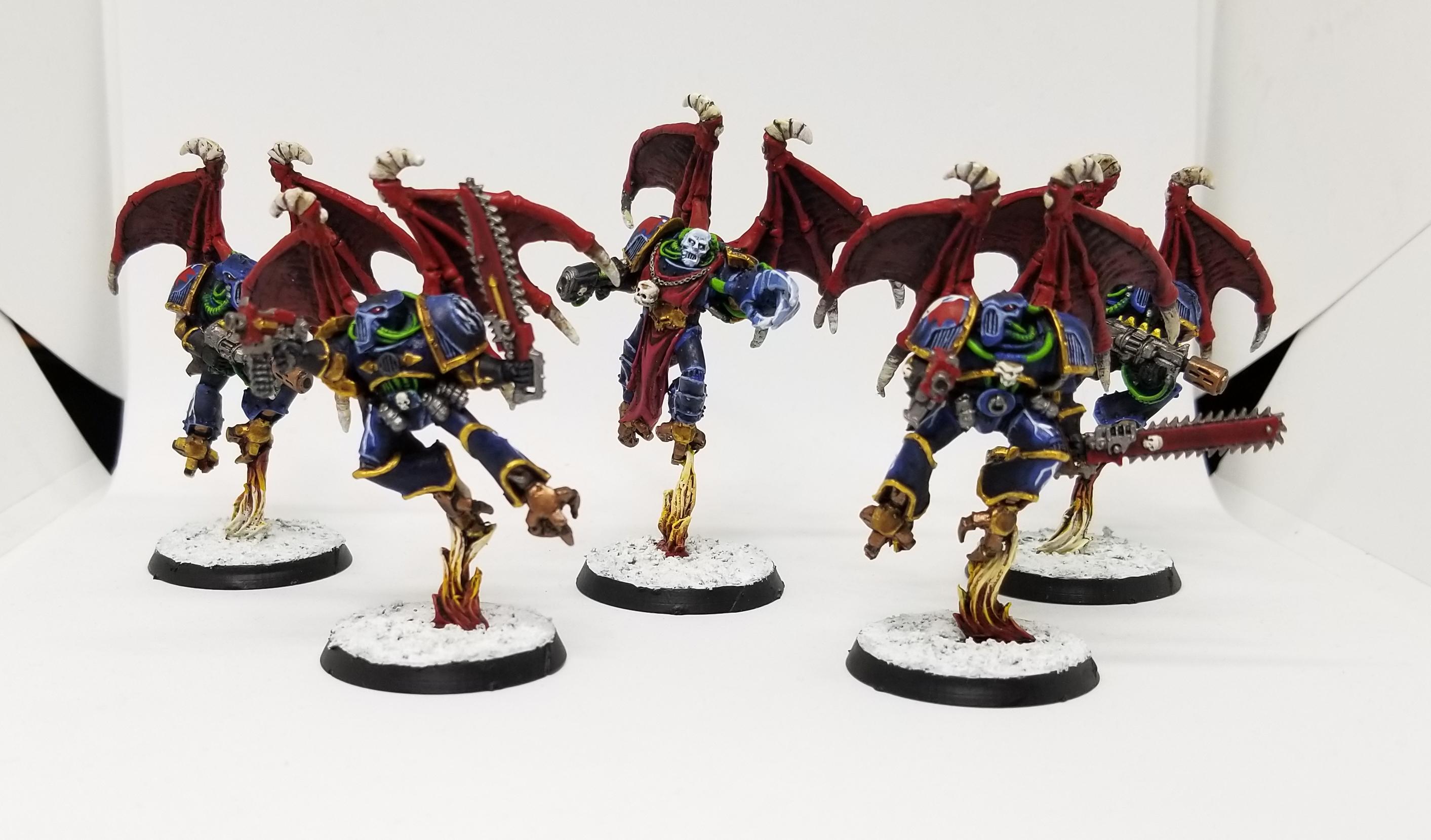 Here’s also where I have to point out that I fuckin hate transfers. I’ve never liked them, and I particularly hate trying to apply them to shoulder pads. So something you’ll notice in my army showcases is that I freehand the shoulderpad insignias on all of my mans.

This isn’t as bad as it looks, except for the Night Lords, where it’s a huge pain in the ass. But the net result is something that looks much more organic than transfers in my opinion. 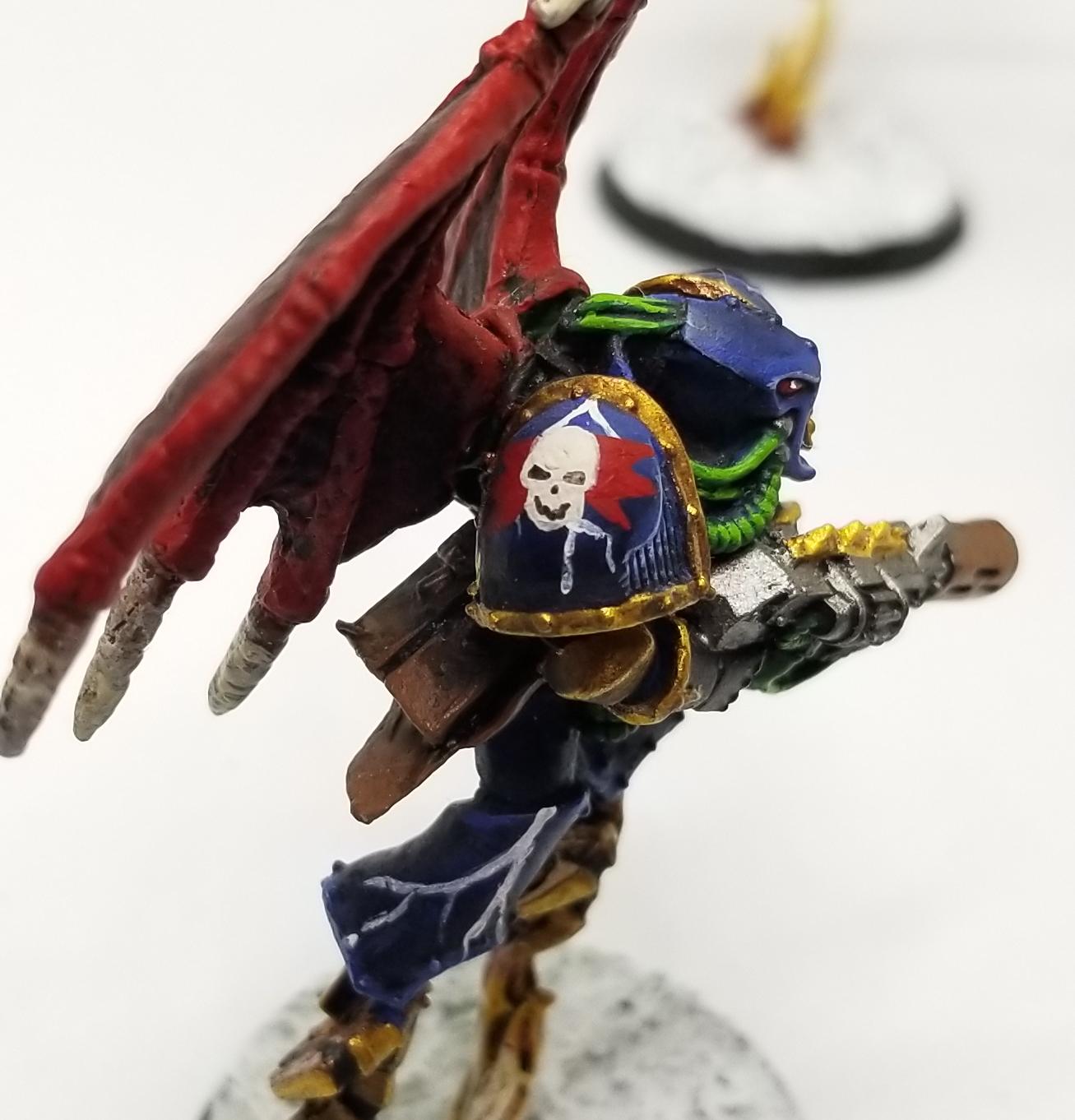 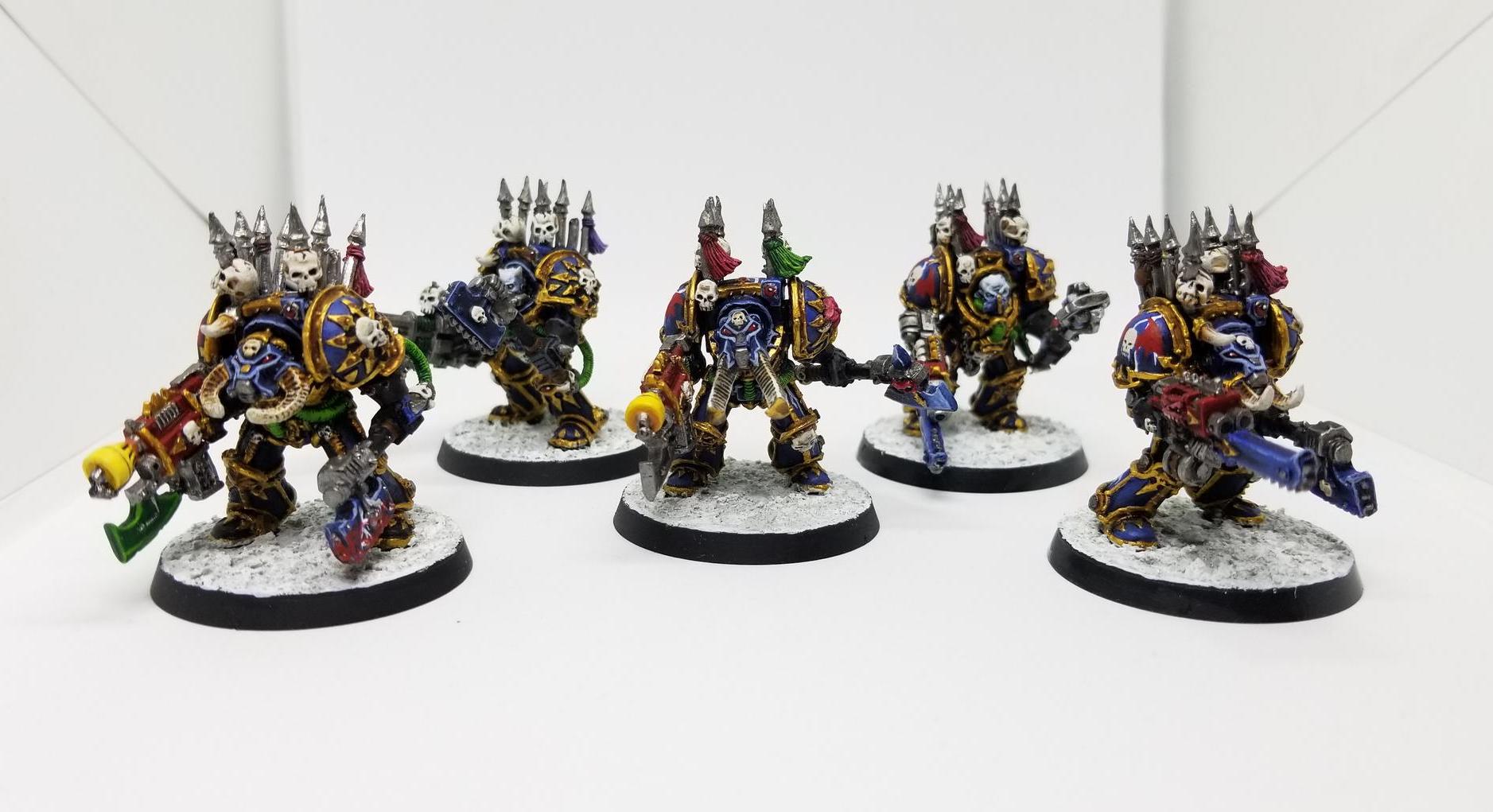 The army is supported by three Sorcerers: One with wings, one on foot, and one on a bike. 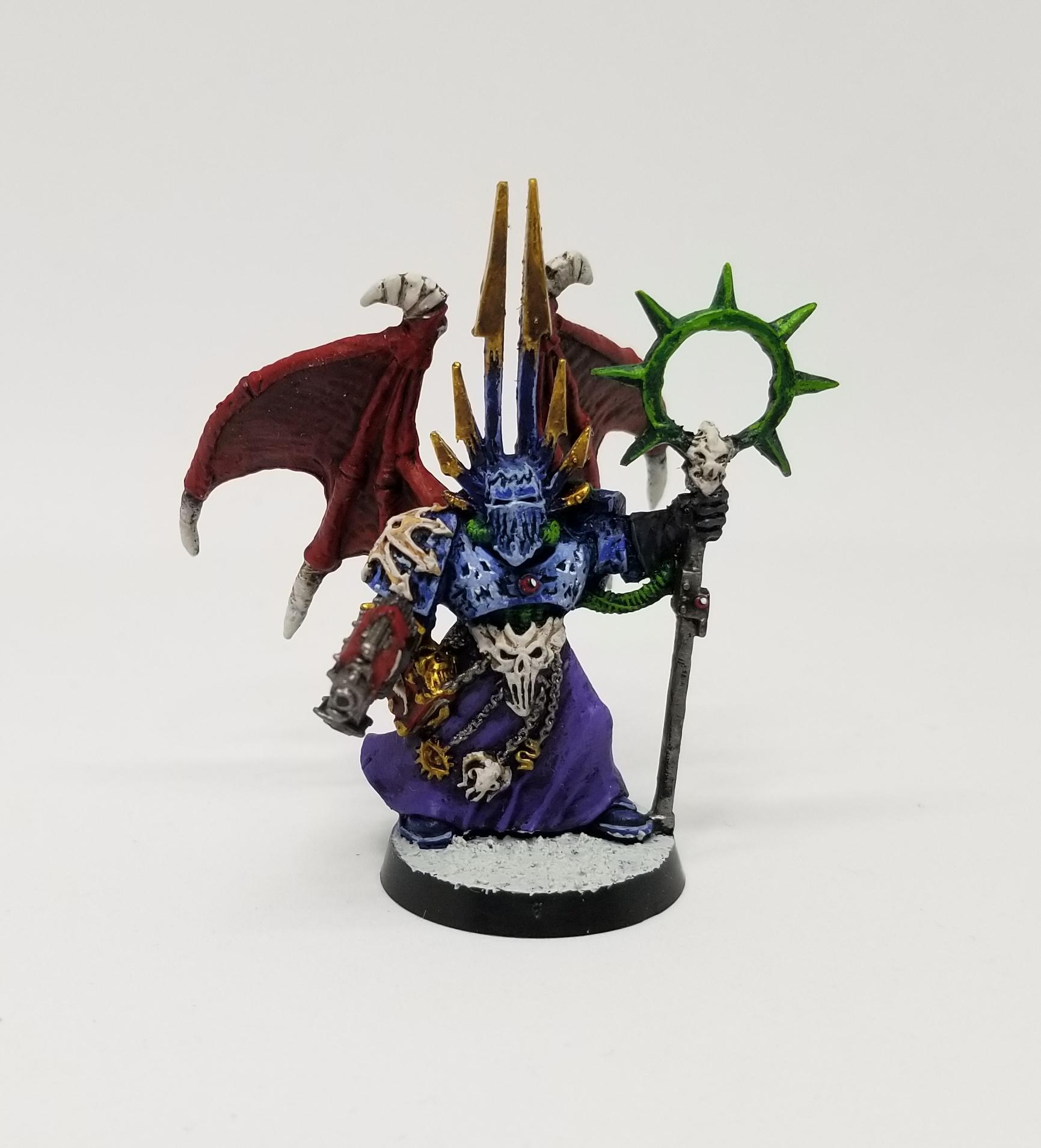 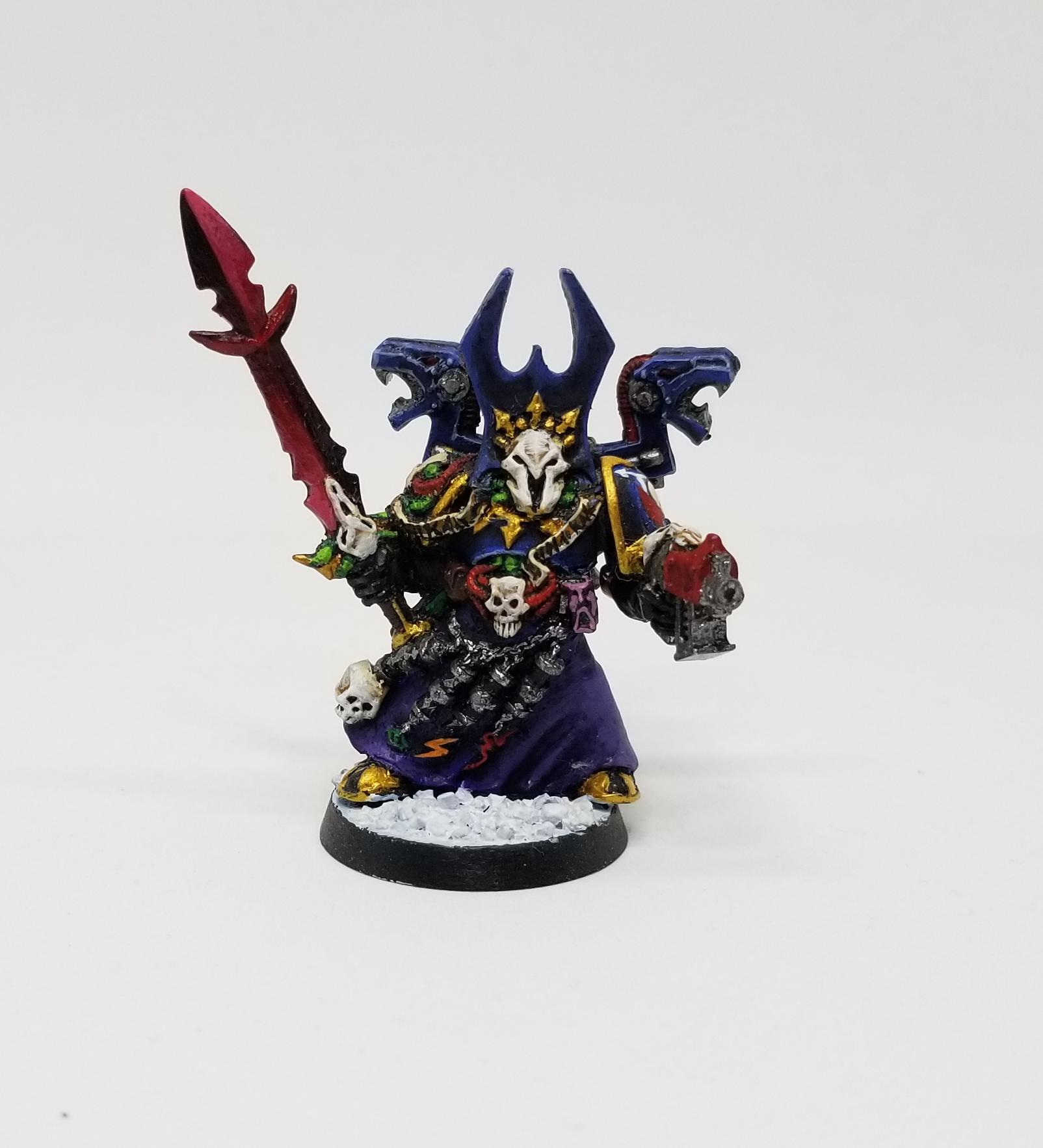 Of the three, my favorite is the one on the bike. He’s had the most conversion work put into him, since sawing a metal Sorcerer in half is a huge pain in the ass. His bike is also jazzed up, with the book from a 54mm Inquisitor. I also only glued his rear wheel to the base so he can pop sick-ass wheelies. 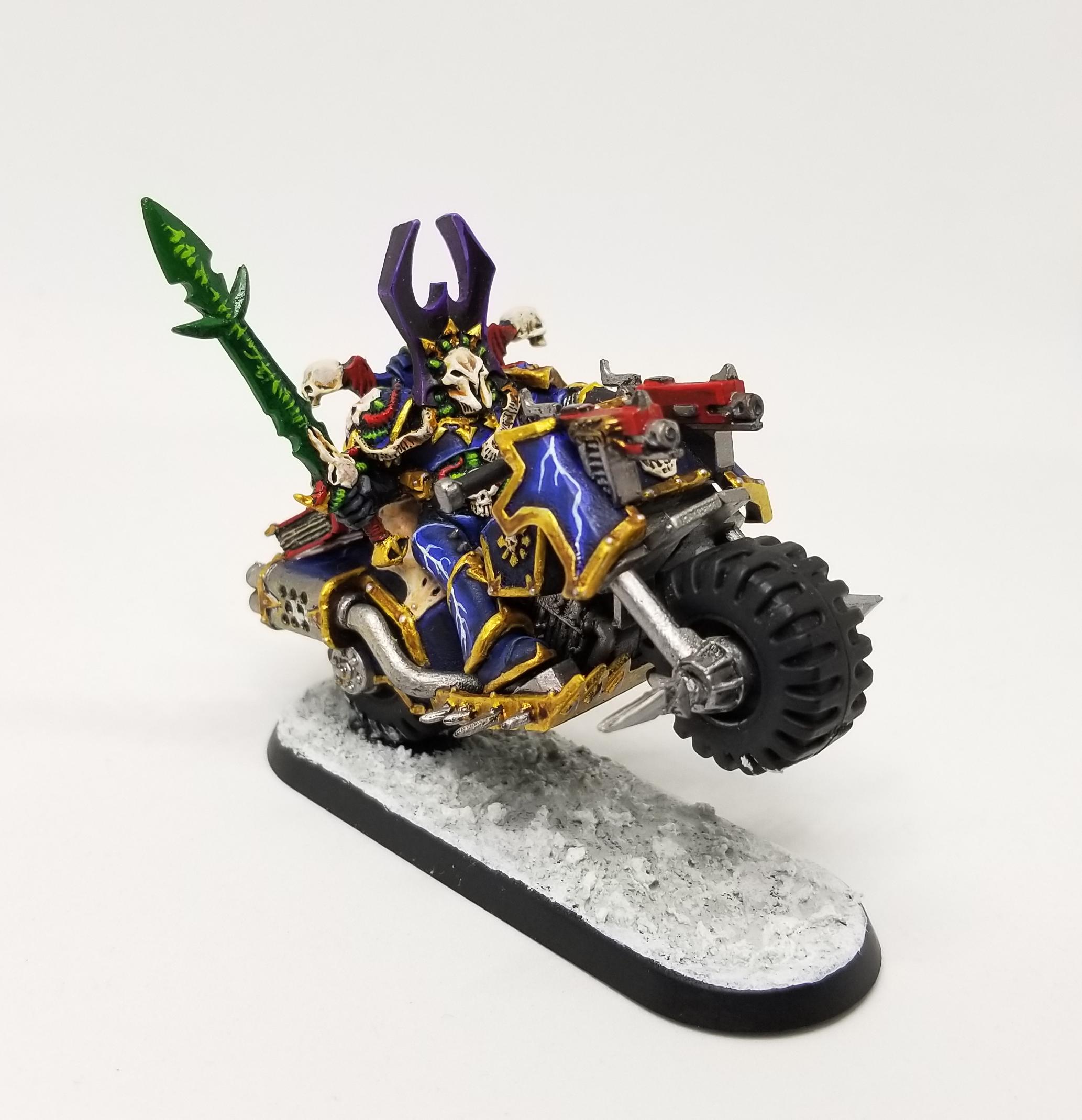 There are two Chaos Lords in the army. The first is one I made back when the Night Lords Hero and upgrade kit was first released. He uses the Night Lords Hero body as a base, but has Gargoyle wings and lightning claws from Abaddon (I shaved off the bolter) and the metal Chaos Terminator champion. I also tried doing a kind of NMM thing on him when I painted him back in college. It didn’t quite work. Still, I have a soft spot for the model, even if he does hang off his base in dumb ways and he weighs like 5 pounds. 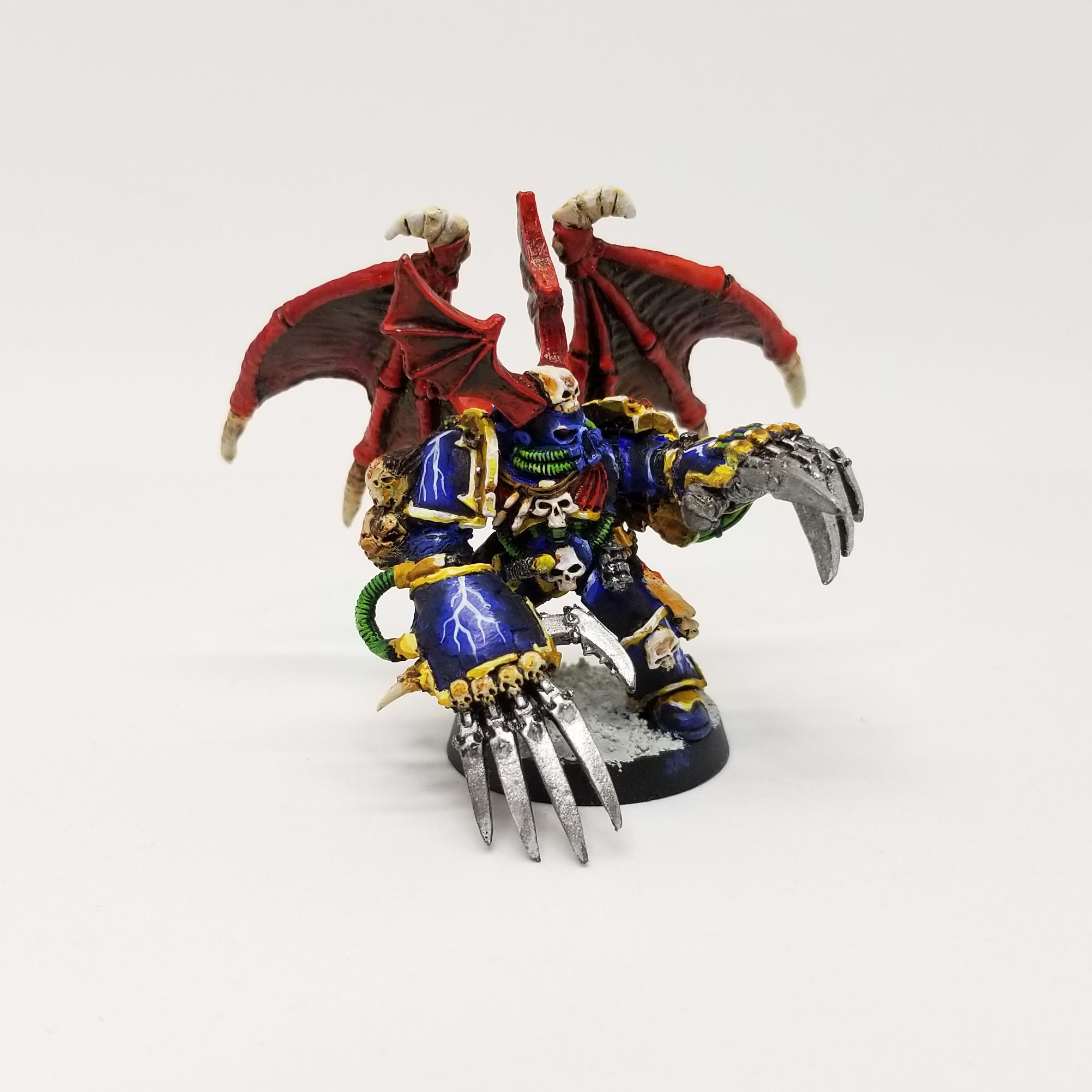 The other, more recent Chaos Lord is a conversion I made off a Sevatar body a friend gave me. Similar concept to the last guy, only using more modern 40k/30k aesthetics. Also he has a more properly-sized base. 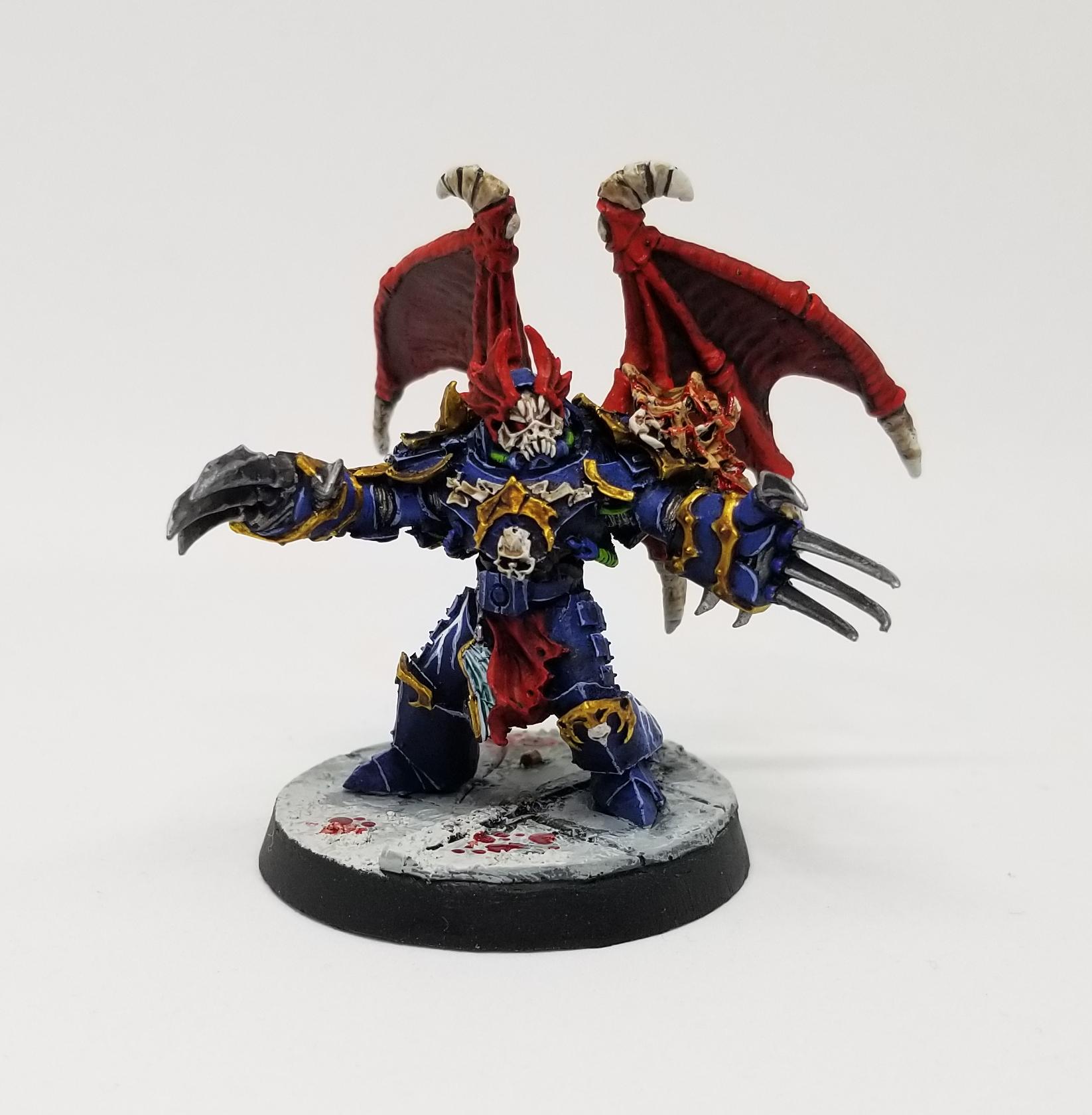 The last of the old guard in the army is Raziel, a Dreadnought built immediately after the 3rd edition Vehicle Design Rules were published in White Dwarf. A close combat Dreadnought for the Night Lords seemed like the coolest thing ever, so I went ahead and made this guy. A couple of years ago I put him on a round base (the old metal Dreadnoughts used to ship with square 40mm fantasy monster bases that looked terrible). 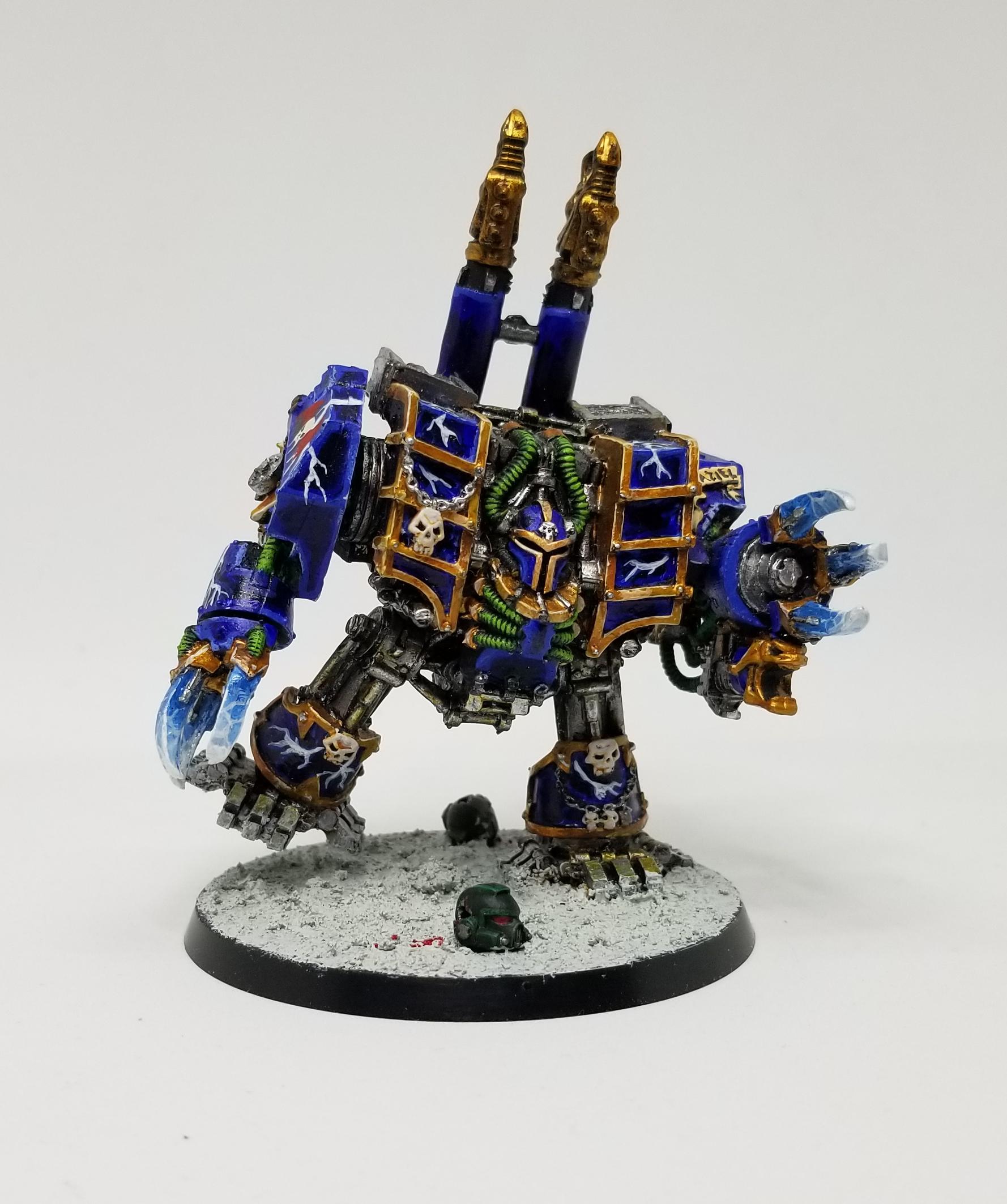 The relative newcomers to the army are the Decimator I painted up a few years ago and the Heldrakes. The Decimator is probably the best-painted model in the army, and is one of my favorite Forge World models. 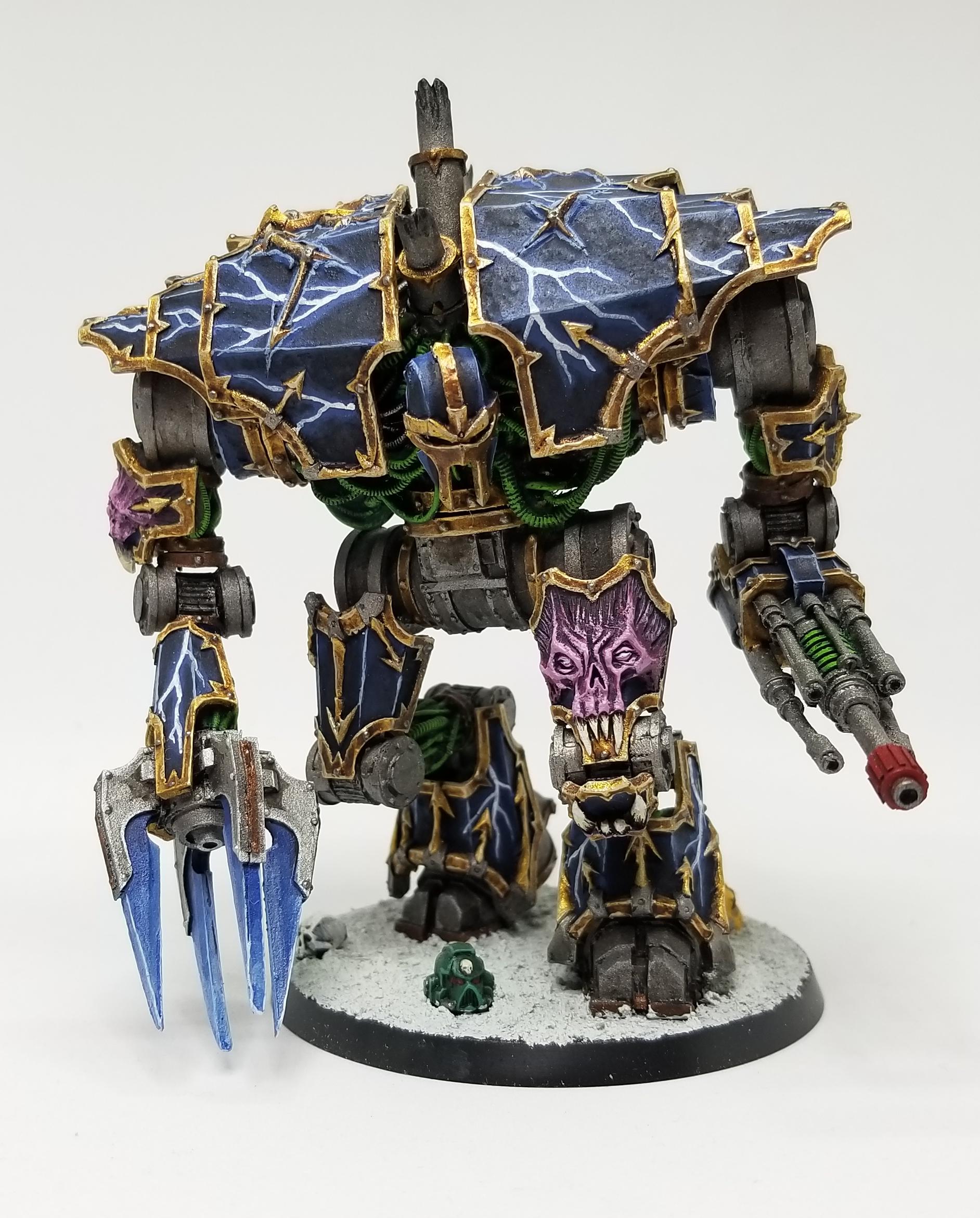 The Heldrakes on the other hand, are both just solid (though they could have had more work put into them, and I may revisit them at some point for some touch-up work). Still, they’re technically impressive, just because painting Heldrakes is a massive pain in the ass. I painted two of them, and now they’re pretty much worthless in 8th edition. Hooray! Their wings are magnetized to make them easier to transport. I kind of regret doing that, because 1. I never take them anywhere, and 2. It makes it so their wings flop around and move all the time. Protip: Don’t magnetize your Heldrake wings. Just take the model and throw it directly into the garbage. 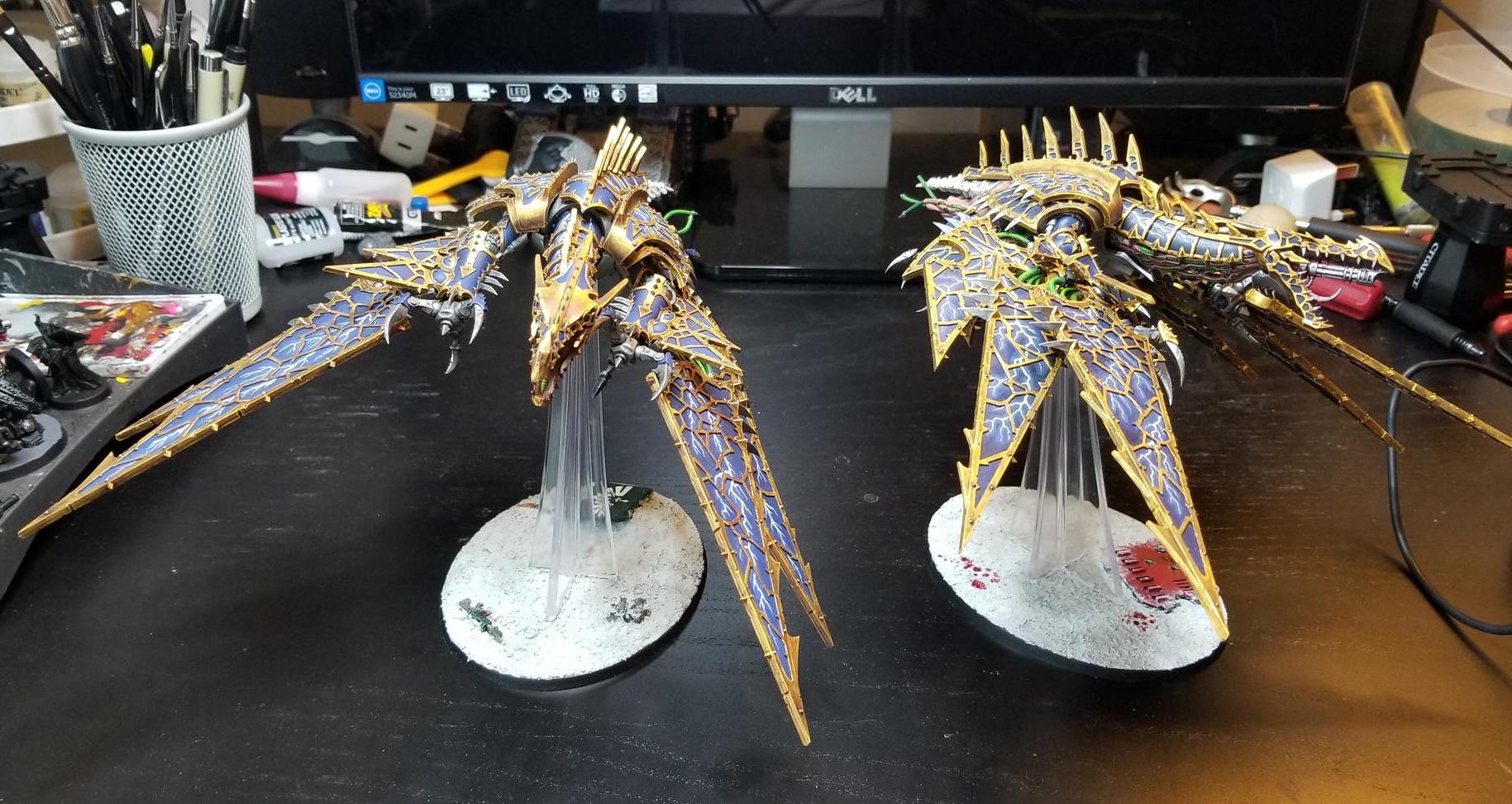 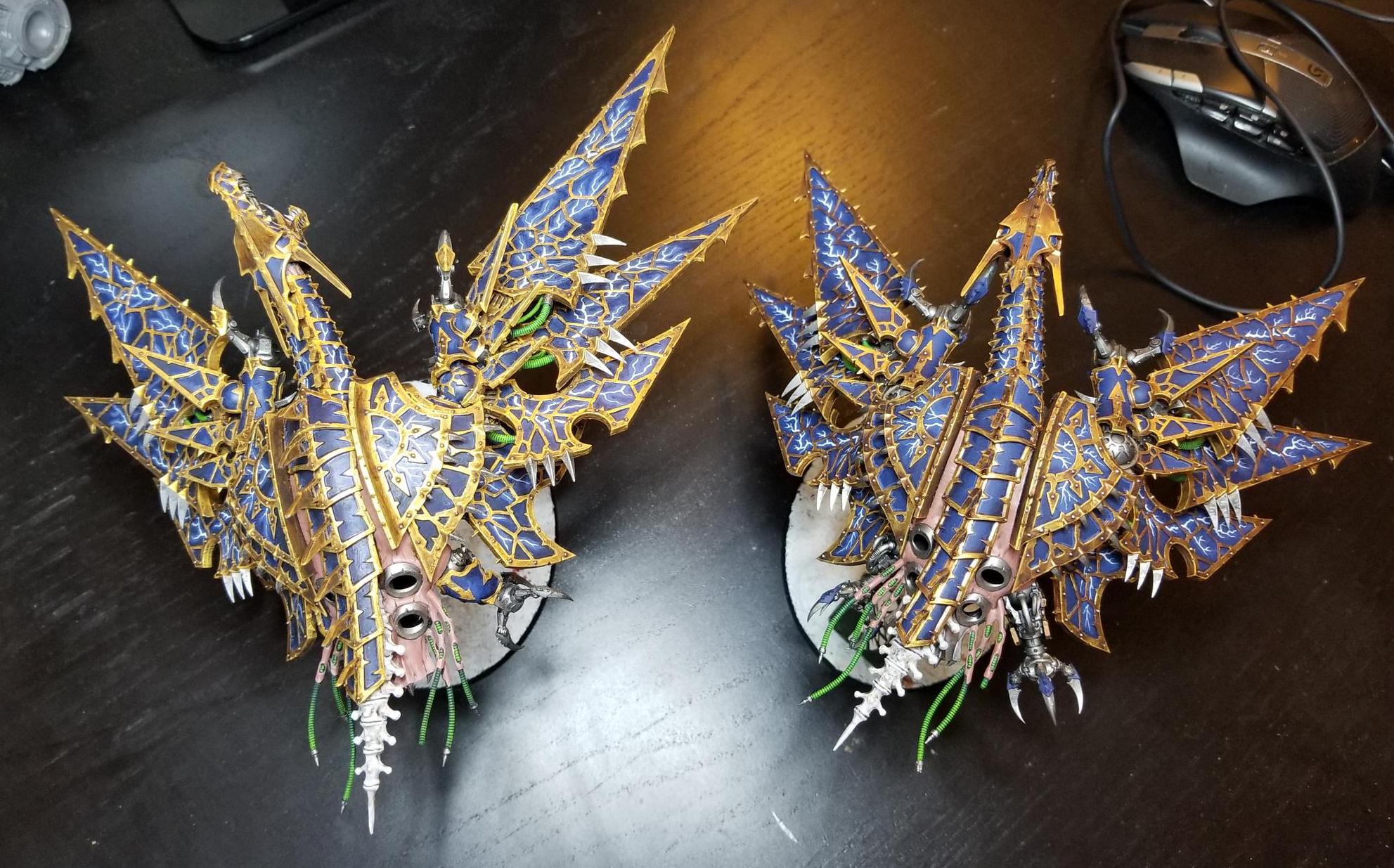 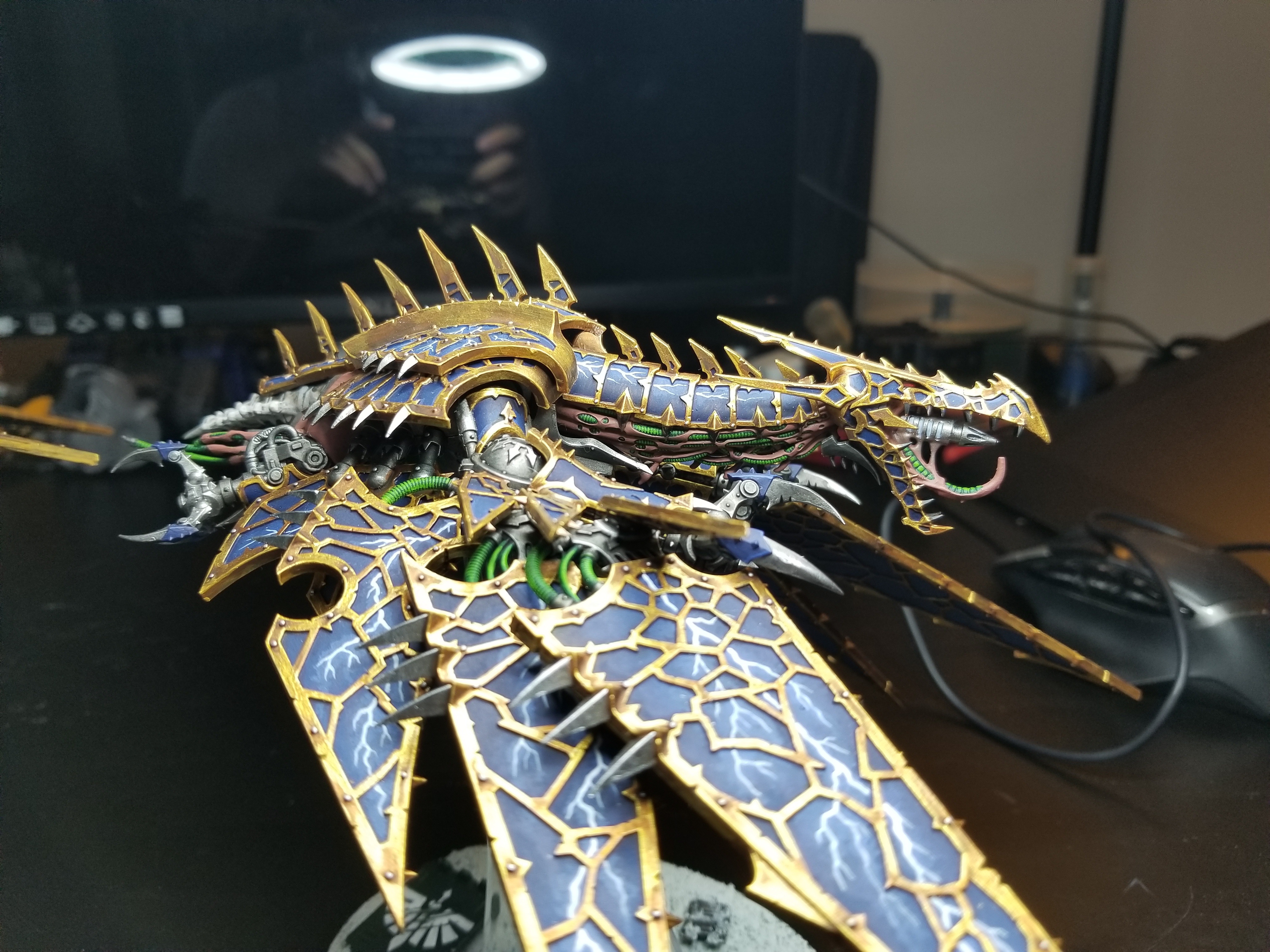 Next Up: More Chaos Mans

I’ll get around to doing another Army Showcase in about a month, and in order to keep this in chronological order, I’ll likely do my Iron Warriors next. They’re a slight step up in terms of painting and modeling quality, but still high-school Rob levels of old in terms of models and painting. In the meantime, if you have any questions or comments about my Night Lords, I’d love to hear them! Shoot me an email at contact@goonhammer.com.