With the release of Warzone Octarius Book 1, this week’s Hammer of Math does a deep dive into some of the complexities of the new Deathwatch Kill Team Strike Force Army of Renown.

Deathwatch are an interesting army. They simultaneously are packed full of flexibility and yet are also highly constrained due to half of their Chapter Tactic relying on your opponent to play a specific army. Their ability to slap nearly anything into a Kill Team is pretty awesome, and I had a lot of fun playing with them in the US Goonhammer Open narrative event. And what would you know, the Warhammer Gods have looked at my army consisting entirely of guys on foot and decided they needed more rules. Thanks GW!

Rob: You can find our review of the new Octarius supplement with the Deathwatch Army of Renown here.

There is a lot to unpack here with all the various combinations of Chapter and Successor Tactics, Kill Team Compositions, re-rolls, and other shenanigans. Way more than I can fit inside an article that’s nominally 1000 words. So this week we’re going to focus on some of the more novel components of the Army of Renown, specifically the Specialism Extremis  and Black Vault Bolts Stratagems.

For 1CP, Black Vault Bolts allows you to take a STRIKE FORCE KILL TEAM or STRIKE FORCE CHARACTER and apply two effects during the shooting phase. First, the Type characteristic of the weapons they’re firing changes to Heavy 1. Second, on an unmodified wound roll of 6 the attack inflicts 1 mortal wound in addition to any normal damage. No matter what the maximum possible number of mortal wounds inflicted per phase is 6. This seems like a fairly difficult thing to achieve, but how realistic is it? 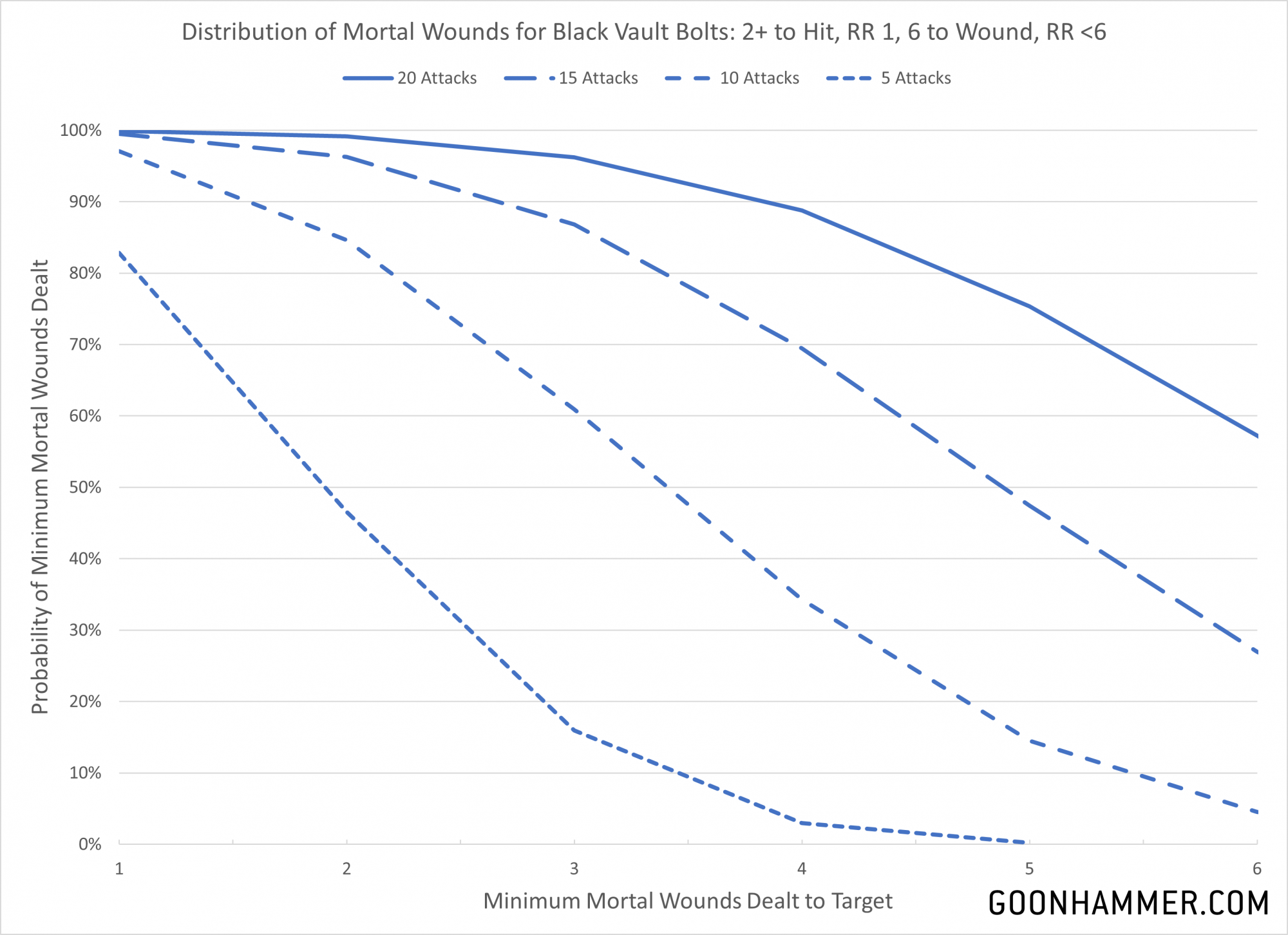 Slightly more damage can be inflicted from a Spectrus Kill Team with 5 Infiltrators and 5 Eliminators armed with bolt rifles firing mortis rounds, but the issue here is that marksman bolt carbines automatically wound the target on unmodified hit rolls of 6. Since you can’t achieve a result unless you actually make a roll (and you can’t roll if success is automatic) this means that a portion of the attacks won’t result in an opportunity to inflict a mortal wound. Incorporating the limitation of the marksman bolt carbine the effective number of shots is 24. This translates to an average number of mortal wounds of 7.13 as the extra mortal wounds inflicted by the mortis round do not count towards the six wound limit. Even on their own, 5 Eliminators averaging 3 mortal wounds from their bolt rifles in addition to other damage is pretty impressive.

Since a Kill Team Strike force can choose their chapter tactic this opens up options like Siege Masters or No Matter the Odds which produce an extra hit on an unmodified hit roll of 6. This effectively increases the number of shots on target by 20% versus hitting on a 2+ (on average every 6 shots at 2+ to hit will produce 5 hits, while every 6 shots at 2+ to hit with the appropriate Chapter Tactic will produce 6 hits).

Another ability is Specialism Extremis, a 3CP Stratagem which gives you a once per battle boost to a unit and simply states that every hit roll (shooting or fighting) automatically wounds the target. Remember Enriched Rounds? Well this is that effect on steroids. There’s one caveat; the Kill Team must have the appropriate specialism and target. Fortunately you can just use AQUILA and not only freely get re-rolls against two Battlefield Roles regardless of the Chapter Tactic, but with Specialism Extremis you can also apply the effect against anything.

So how effective is it? Assuming a 2+ to hit and re-rolling 1s you’re looking at 97% of your attacks automatically wounding. From there it’s a question of penetrating armor and then dealing as much damage as possible. We can estimate the potential by looking at “average maximum potential damaged” (AMPD), which is the number of attacks multiplied by the Damage characteristic and the probability to hit. Multiplying that value by the probability of the target failing the resulting save allows you to predict how many wounds will be inflicted on average.

The two charts below put these numbers into effect. First up is 5 Aggressors firing with a 2+ to hit, re-rolling 1s. Each line represents a different save profile. As the saves get worse the numbers quickly become absurd, with the massive volume of rolls overwhelming nearly anything. 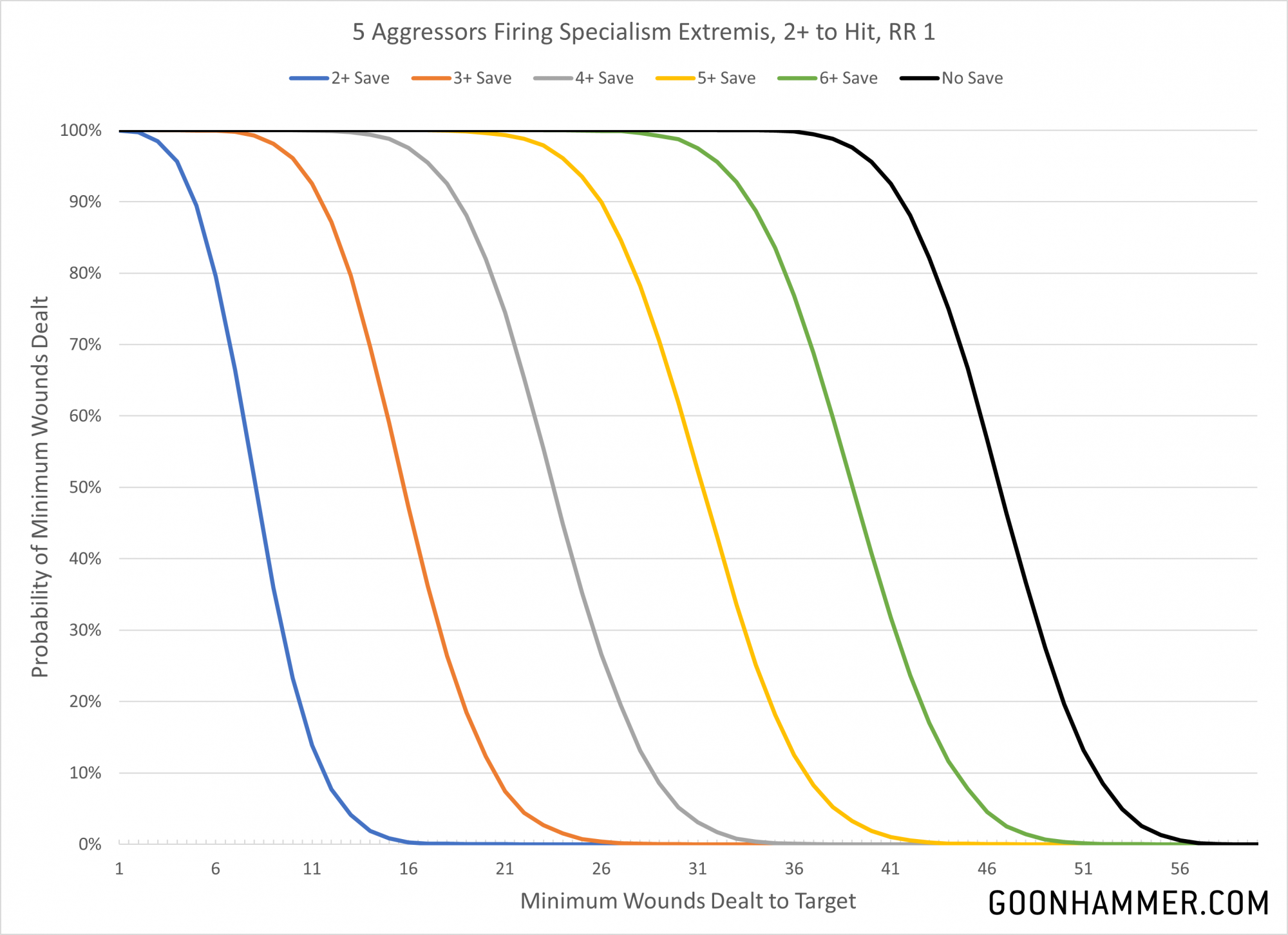 Here’s another example featuring Vanguard Veterans. 3+ to hit and re-rolls isn’t that hard to achieve; you could make things even more extreme by using Whirlwind of Rage to effectively increase the number of attacks by 20%. 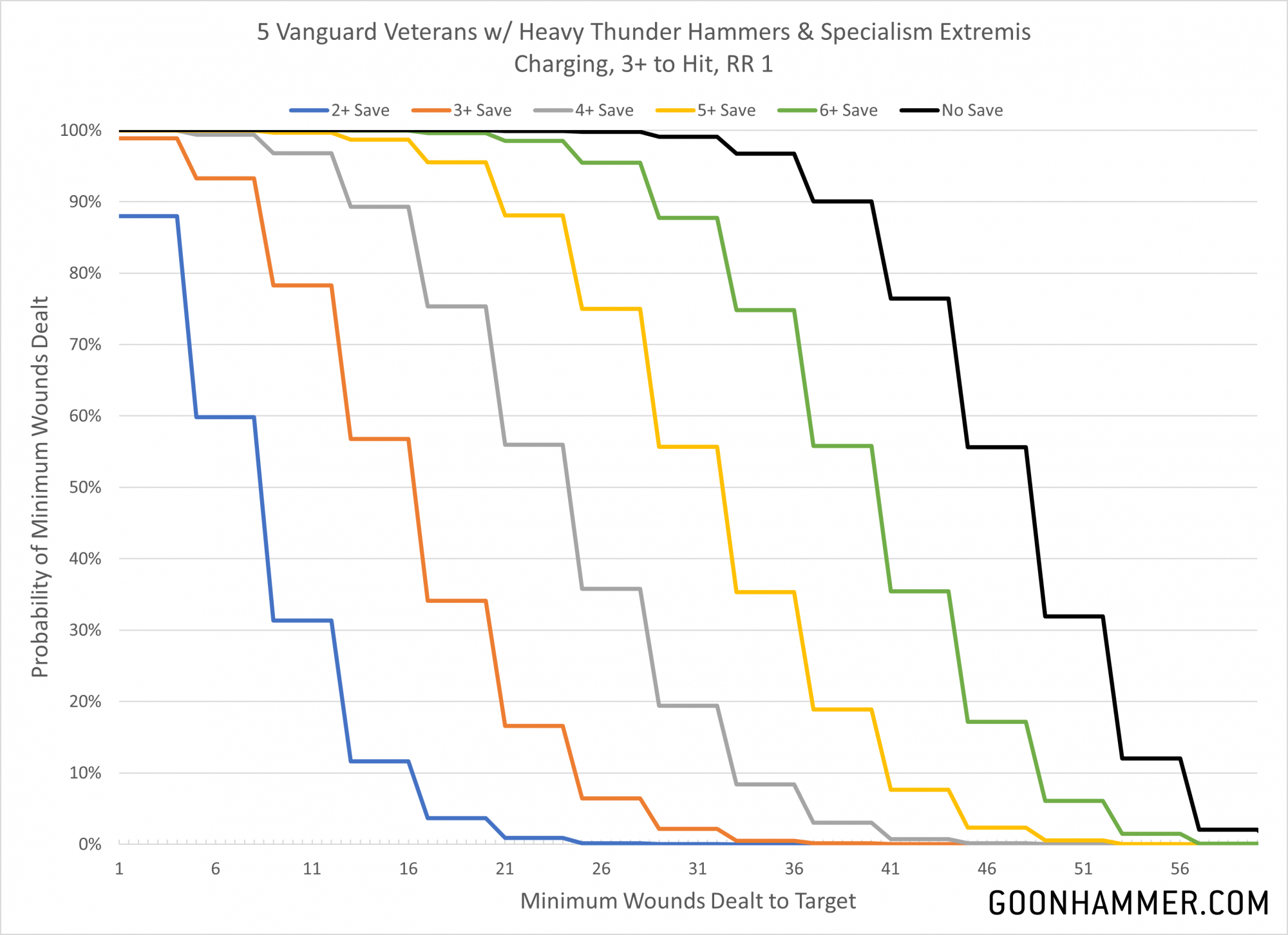 Finally we can take a look at something less boosted; 5 overcharging plasma Inceptors with no bonuses outside of re-rolling 1s to hit so that you aren’t guaranteed to wipe out the squad with their own guns. With AP -3 or AP -4 this unit can kill a large number of targets even without the application of hit bonuses. 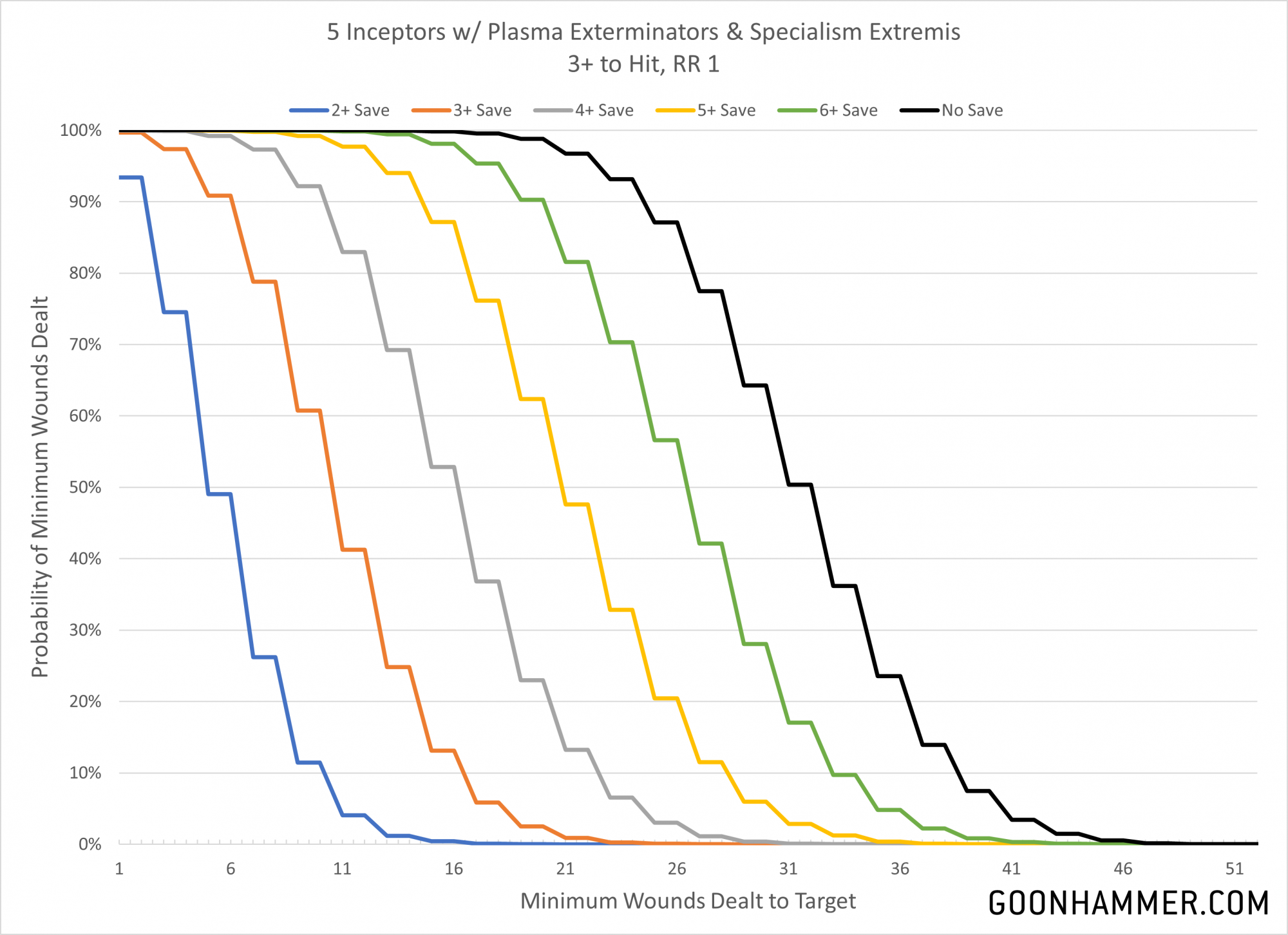 The new Strike Force Army of Renown gives an immense amount of capability to Deathwatch players. Properly applied, Black Vault Bolts can provide a very nasty boost to lethality of units like Eliminators, or reliably inflict 6 mortal wounds from a Kill Team firing at close range. Specialism Extremis is extremely effective and well worth the 3CP investment. Properly applied this Stratagem has the ability to delete nearly anything in the game, and Deathwatch players can apply it to a wide variety of scenarios. Infantry heavy Deathwatch armies should expect to have a lot of fun with these rules, and everyone, not just xenos, should be scared of what they can do.