The Aeronautica FAQ has finally dropped. The fundamental rules of Aeronautica are solid, but it had exploits and areas the weren’t clear enough, which have been amended. This is not an FAQ like the Iron Hands one, which fundamentally changes the way something works, but one that fixes minor things.

In it the rules changes from the Taros book are spelled out, and they clearly deal with a number of issues in the original rules. It’s clear that the Taros book went to print after Skies of Fire, and the changes prompted by the issues at the Warhammer World AI event were incorporated into it prior to printing.

There were two big exploits that came up at the Warhammer World event.

Stalling was something some players deliberately did to give opposing players a penalty to hit their plane, and so has been changed so that a plane that has stalled gets -1 to it’s shooting.

Stalling itself has been fixed so that it is clear what the effects of stalling are, and aircraft can no longer climb above their max altitude, stall and get a penalty to be hit, perform their attacks and then stall and possibly spin. Now trying to climb above your max altitude just causes you to stall.

Occupied hexes, where if you end your movement in an occupied hex you pop out of the other side to effectively gain a free hex of movement (and exploited by Warhammer Community’s Nick Bayton to get half way across the map on turn one with his Eavy Bomber) has been changed so you roll a D6 for each free hex of movement you get, taking a point of damage on a 1, and end up turned to face a random direction at the end. This should prevent players using it to leap slow aircraft across the board, as doing so has a risk of damage and a 50% chance you’ll end up facing the wrong direction. 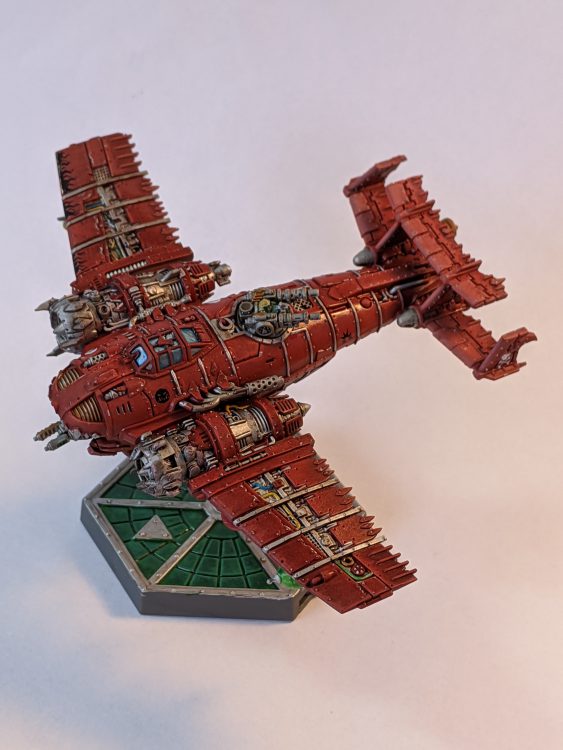 Stalling and Spinning was unclear to a lot of people, and these rules have been clarified and spelled out. It’s now clear exactly what happens.

I think the clear intent is to limit Bombing Runs to Ground Attack weapons was there in the original rules, but I’m well aware there’ve been entire 40k metas based on the rules not explicitly disallowing something they were clearly not intended to allow. The fix on 40k conga lines in 9th edition being a clear change to better reflect authorial intent. It is now spelled out in the Q and A section at the end of the FAQ that to be used in a Bombing Run a weapon must have the Ground Attack rule, thus closing that loophole.

Weapon firing, and the ability to see the effects of one set of missiles/rokkits before deciding if you’ll fire another, is actually something that wasn’t clear in the rules. I’ve always gone with being able to fire one system, think about it and then fire another, because that is how the Community Team have played it on Warhammer TV. However the rules didn’t say either way, and now it is clearly stated that you have a choice.

The biggest and most obvious change causing the largest number of salty tears for Imperial players is that Thunderbolts and Thunderbolt Furies have both gone up by TWO (2) points. This is a clear change for balance purposes, as with the second book it’s clear that the Orks and Tau are reasonably balanced against each other and that it’s the Thunderbolt/Furies from the first book that throw the whole balance curve out of whack.

The other thing was that if Thunderbolts didn’t go up in price then there wasn’t really much reason to take any other Imperial plane, as Furies were the most brutally points efficient plane that Imperials could get hold of. Now there’s a reason to take Lightnings (even if I think the multilaser lightning might be a point or two too expensive).

The Thunderbolt changes have totally overshadowed two changes made to Orks.

Autonomous weapons now move 3+D3 hexes in the turn they are launched. This makes them less reliable, as previously they could move up to six hexes in the first turn, essentially letting you hit any target up to seven hexes away with impunity. Now it’s less reliable and more Orky and random, and nerfs the Grot Bomber, possibly the best weapon in the Ork arsenal, somewhat. Since Tau and the wave two Imperials are pretty well balanced against Orks, I’m fine with this as a mainly Ork player. The Q&A section clarifies you can’t put more than one Autonomous Weapon in a hex, Autonomous weapons only hit one adjacent target and the owner of the weapon chooses the target, all of which weren’t clearly stated in the original rules.

Big Bombs are changed to make them much more attractive to take. Essentially Big Bombs are now two per aircraft, but they take half an ordnance space, so a Fighta Bommer (or Eavy Bommer) can take two pairs of Wing Bombs and 2 Big Bombs in order to potentially roll 20 dice against a ground target and absolutely flatten it. Big Bombs now mean you pay about an extra point per bomb in order to get an extra ordnance space, and there is a point in taking them now. It may mean Ork players like myself need to snap off a couple of bombs to replace them with something else, but it does make the ordnance load out on the Eavy Bommer box art legal in the game.

At the Warhammer World event there were a number of issues with the scenarios, as when they were copied over from Aeronautica 1st edition they weren’t completely changed to take into account the 2nd edition rules. Most blatant of these was The Straggler, as the straggler aircraft could now disengage on Turn 1 in the 2nd edition rules by simply deploying facing the table edge and flying off in the first turn. This now changes to having to disengage from the attackers edge, as we saw in the scenario booklet included in Skies of Fire.

The Troop Landing scenario has aircraft now start at their maximum altitude rather than altitude 5 (thus meaning the Orks stalled on the first turn).

I like the FAQ, and feel it’s a well thought out set of changes and clarifications. I’m also happy that the altered wordings were decided in time to include in the Taros book (though if players only have the starter set or Rynn’s World books this FAQ gives you all the changes).

I’ve been very impressed with Wave Two, and was happy to have a good chat to the designer at Warhammer World. I’m glad Thunderbolts went up by two points, as I feel this makes the other Imperial planes more competitive with them and makes it much more likely that I’ll see a range of Imperial squadrons out there and not just a Marauder Destroyer plus as many Thunderbolt Furies as there are points left.

Aeronautica has had a big boost with Wave Two, and I can’t wait to see Chaos and Eldar in Wave Three, and the new players that will bring into the game. Unfortunately release schedule time is limited and this is a game that will build up its factions slowly, like Necromunda. Realistically I’d expect Wave Three in Q1 of next year at this point, but that does give us plenty of time to paint up the new stuff and learn to play it before Eldar take a big steaming dump over balance with their perfidious ways.

Have any questions or feedback? Drop us a note in the Comments below, or email us a contact@goonhammer.com.