How to Paint Everything: Sisters of Silence

In our How to Paint Everything series, we take a look at different armies of the Warhammer universes, examine their history and heraldry, and look at several different methods for painting them. This week we’re looking at the Sisters of Silence.

Who Are the Sisters of Silence?

The Sisters of Silence are an elite order of Imperial witch hunters. They’re exclusively female, and they all carry the Pariah gene, marking them as psychic “nulls.” This makes them ideal for hunting down errant psykers and battling the horryfing creatures of the warp. They work very closely with the Adeptus Custodes in the Imperial Palace on Terra, and were active throughout the Great Crusade and the Heresy. They are perhaps most known for operating the black ships that move between imperial worlds, collecting the Great Tithe, the resources a planet must pay to the Imperium. This includes a collection of psykers rounded up from the population of each world to be taken back to Terra and fed to the Golden Throne to sustain the golden light of the Astronomicon.

Believed to be disbanded shortly after the Age of Apostacy, the Sisters of Silence operated in secret for many years but have re-entered public operation since the re-awakening of the primarch Roboute Guilliman. They now serve as potent warriors against the threats of the Immaterium and the rapidly expanding population of human psykers as a result of the effects of the Cicatrix Maledictum.

The Sisters of Silence really get a chance to shine in the Horus Heresy series, where they work closely alongside Custodes, and recently they’ve begun to see more use in the 41st millennium. Sometimes it’s hard to pick some good books to talk about for a particular faction, even an Imperial one. This is not one of those factions – there are some really good books featuring the Sisters of Silence.

in Warhammer 40,000 Sisters of Silence aren’t really a standalone army, instead being part of a group of Imperial Agents called the Talons of the Emperor. They can be added to a larger IMPERIUM force, and recently got some new rules in War of the Spider.

In Kill Team the Sisters recently received rules in White Dwarf for their own kill teams. We’ve written about them and our thoughts on playing these kill teams here.

The Sisters of Silence have a lot in common with the common companions, the Adeptus Custodes, from a painting standpoint, and if you wind up doing more of the Talons of the Emperor you may want to consider painting them with matching schemes. You can find our article on painting Custodes here.

Contrast, baby! Contrasts works as well over Retributor Gold spray paint as it does Wraithbone and Greyseer. We’ll give that a shot with the tips below! If you’re curious about other colors, check out this guide: 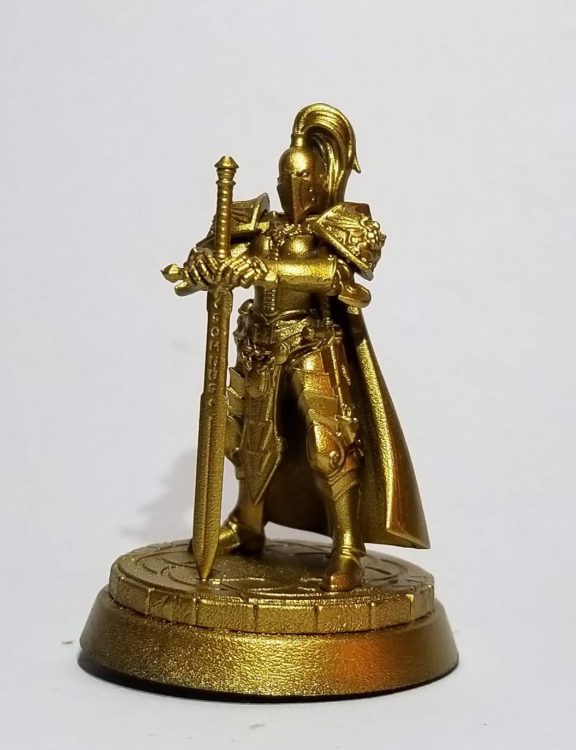 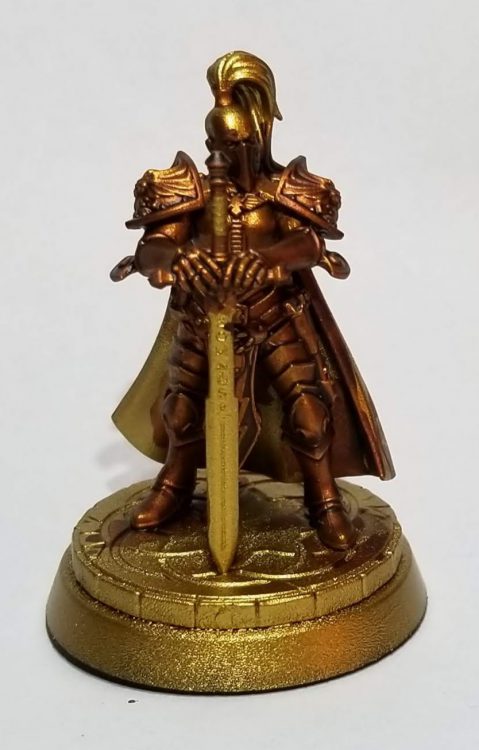 The last bit of note on these gals is that I replaced their heads with some from the excellent Statuesque Miniatures. I’m not too fond of the giant face plows on the stock Sisters of Silence. Make sure not to use any of the shouting heads unless you’re converting up some Sisters of Loudness.

Armor: The armor was done using the Scale75 copper and brass set. Basecoat is Decayed Metal followed by a coat of Old Copper on everything but the deepest recesses. Then highlights were built up with Victorian Brass then Pure Copper. All over wash of Reikland Fleshshade. Nuln Oil was neatly put into the deepest recesses. Pure Copper highlight built back up and Finally an edge highlight of Citadel Runefang Steel was applied.

Leather: Vallejo Model Color German Grey was used to build up some areas of highlight on the black parts, then and edge highlight of VMC Basalt Grey. (Same for Hair)

Cape: This was done similar to the leather, but building up grey tones using quick brush stokes in horizontal lines. VMC German Grey was done in lines over most of the surface, followed by a mix with VMC Basalt Grey hitting the raised folds. Next was a series of smaller lines of VMC Basalt Grey on most raised areas. The eagle was done the same way using brown and building through yellow to a tiny bit of white.

Tattoo: I used the GW store image for reference here. Started out by roughly making the eagle shape with thinned down black. Once the shape was looking right the area was filled with a few layers of a VMC Prussian Blue and black mix. Kislev flesh was used to clean up around the edges and straighten out anything that looked off.

That wraps things up for our look at painting Sisters of Silence. As always, if you have any questions or feedback, or want to show of your own Sisters of Silence, drop us a note in the comments below or email us at contact@goonhammer.com.