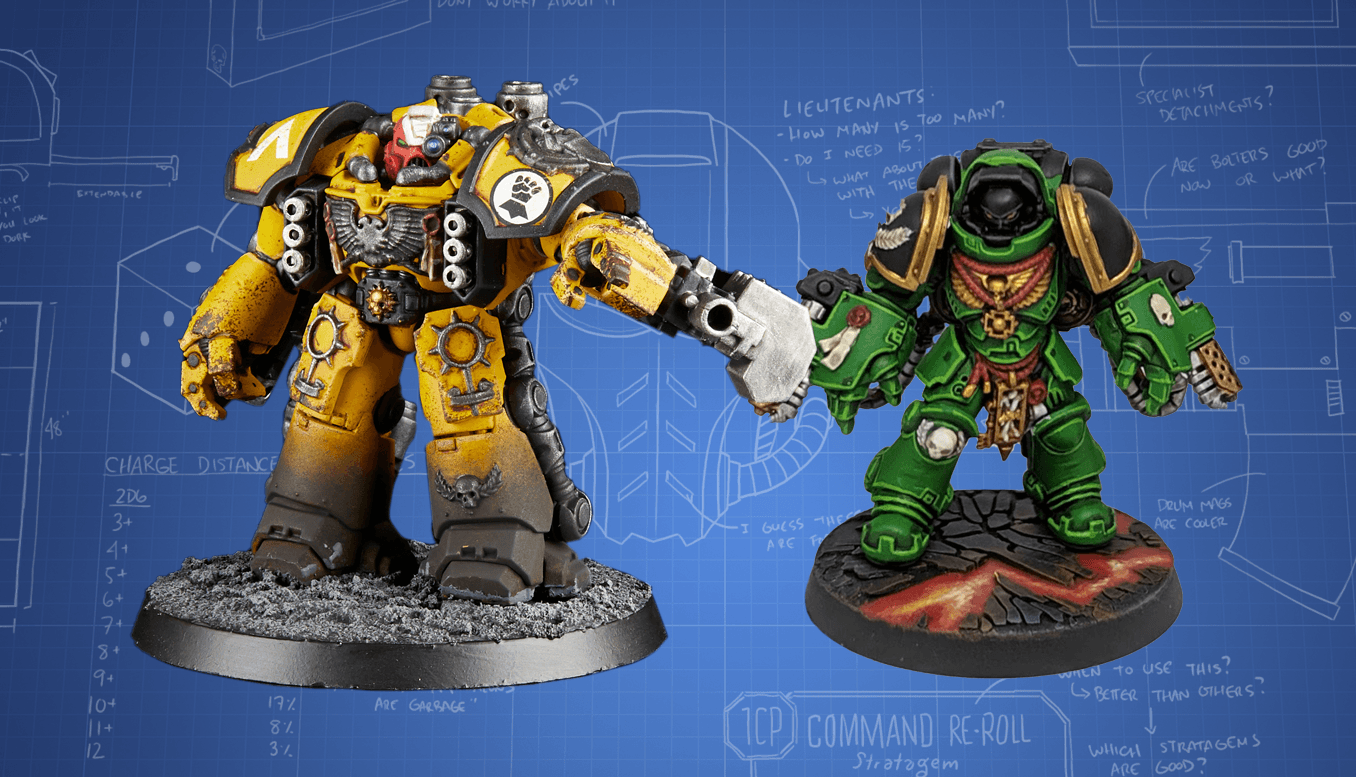 We awake to a bright new day……..and a couple new FAQs! Huzzah! Today brings us updates to the last round of Space Marine supplements, getting some adjustments for the Imperial Fists and Salamanders. We’re taking a look at what’s changing in both those supplements, and whether those changes really matter at all. 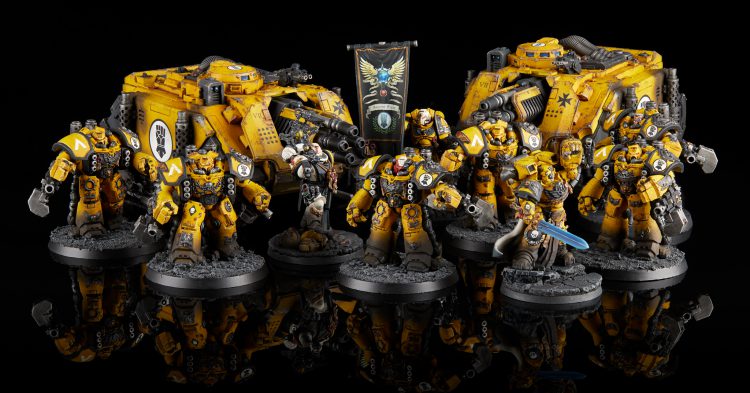 Imperial Fist updates here are remarkably light. The book was well written, and we haven’t seen much in the way of confusion or unexpected combinations pop up over the last few weeks of use.

Two tweaks were made here – the first is that the stratagem kicks in at the end of the Morale phase rather than at the end of the turn, which locks it down to being used once per turn. Previously, as it was used at the end of the turn and not during a distinct phase, it could be used as many times as you want. Clearly not intended. The second tweak is locking the stratagem out from affecting invulnerable saves. This kills off having a 2+ invulnerable on a unit with storm shields, or from being able to turn a Deredeo Atomantic Pavise save into a 4+ invulnerable, but this stratagem is still quite useful to buff up centurions or a big intercessor squad.

The Eye of Hypnoth relic and the Indomitable warlord trait have both been removed, as the Imperial Fists supplement replaced them. This was completely unsurprising for the Eye of Hypnoth, which was upgraded in the supplement, but losing the warlord trait is a bit of a disappointment – we were hopeful that with how different the version of the trait in the supplement is both would still stick around, especially since the Vigilus Defiant version was very useful.

Seismic Devastation is updated to trigger off unmodified wound rolls of 6, instead of modified rolls. Completely unsurprising, between a Chaplain and the Tank Hunters stratagem the mortal wounds could’ve triggered on as low as a 4+, which is straight absurd.

The last clarification in the FAQ is another expected comment that successor chapters cannot have a Siegebreaker Cohort. This isn’t a change in any way, as the rules already supported this, but it’s now a bit clearer. 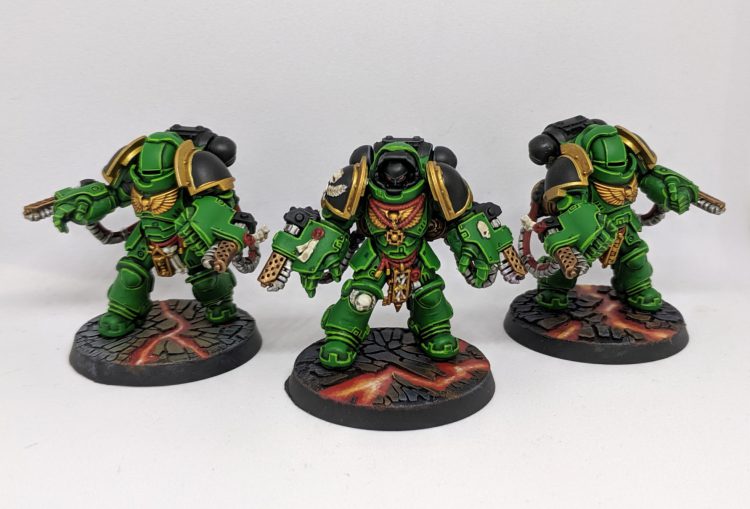 Salamanders get a little heavier changes than the Imperial Fists got – both The Fires of Battle and Self Sacrifice got some significant changes reflecting unintended interactions between multiple stratagems.

The Fires of Battle

This stratagem is now capped at 3 mortal wounds. Previously, The Fires of Battle could be comboed with Flamecraft to max out a flamestorm aggressor’s shots, which would deliver 24 hits and typically 12 mortal wounds, or 18 if near Vulkan He’stan. GW have decided that this is TOO MANY, and now it’s down to 3. You’re more likely to now want to use this on an infiltrating invictor rather than on aggressors.

Several changes on this one. Self Sacrifice now requires your SALAMANDERS INFANTRY unit to be 5 or more models that are not within 1″ of the enemy, so you can’t force a character or unit locked in combat as the only target. Instead of protecting any infantry unit within 6″, it now protects a single infantry unit wholly within 6″ of the sacrificial unit. The sacrificial unit is also always a valid target as long as it’s within range and visible to the firing unit, so the Shrouding psychic power can’t be used to prevent it from being targeted. Combined these area pretty significant nerf to the potency of Self Sacrifice, as it now doesn’t make whole swathes of your army untargetable, but it’s still highly effective to protect a single unit. The protected unit isn’t locked to being Salamanders, so in a soup list it could be used to have tough Salamanders terminators protecting a squad of Imperial Fist centurion devastators. Requiring the protected unit to be wholly within 6″ of the sacrificial units is going to end up being tough in some situations, but it’s still entirely possible to make it work, and even still pull some shenanigans – a squad of scouts in the ground floor of a ruin can be the sacrificial unit, protecting a squad of devastators on the floor above. As long as the scouts are up against the wall, and the devastators about an inch back, the scouts will be the closest unit, meaning that neither can be targeted without line of sight ignoring weapons.

This change indicates that just like the rest of the population, GW have trouble telling affect/effect apart. No actual gameplay impact.

From Forge World we’ve got clarifications that the Infernus Cannon, Dreadnought Inferno Cannon, and Burning Wrath are all considered to be Flame weapons, and we also have some simple clarifications on how math works (Strength of the Primarch + Drake-smiter is 9 damage on a wound roll of a 6) and that Born Protectors allows another unit to fire overwatch even if the first can’t.

While Salamanders did get hit with a pretty significant nerf bat here, the changes to Self Sacrifice were probably needed. Having one character that hides out of LOS be able to protect a significant chunk of the infantry in an army was neither fluffy nor fun to play against, so toning that down makes a ton of sense. We don’t see a whole lot of reason behind the Fires of Battle nerf, there’s nothing too strange going on there and combining it with Flamecraft on an aggressor doesn’t seem too odd, so losing a relatively hard to trigger mortal wound hose is excessive.

From the Imperial Fists there’s nothing going on that’s unexpected. We’re sad about Vigilus Indomitable going away, but it’s probably for the best – having two traits with the same name and different rules gets confusing quickly. Both of these changes are a hit to common competitive lists for Imperial Fists, and some adjustments will need to be made in armies to account for them, but the entire supplement is strong enough that we don’t see this being a big nerf to the overall effectiveness of the army.

The big question in our minds is where the Phoenix Rising FAQ is – Focus Will, as written, still does exactly nothing, and that book was released before either of these.