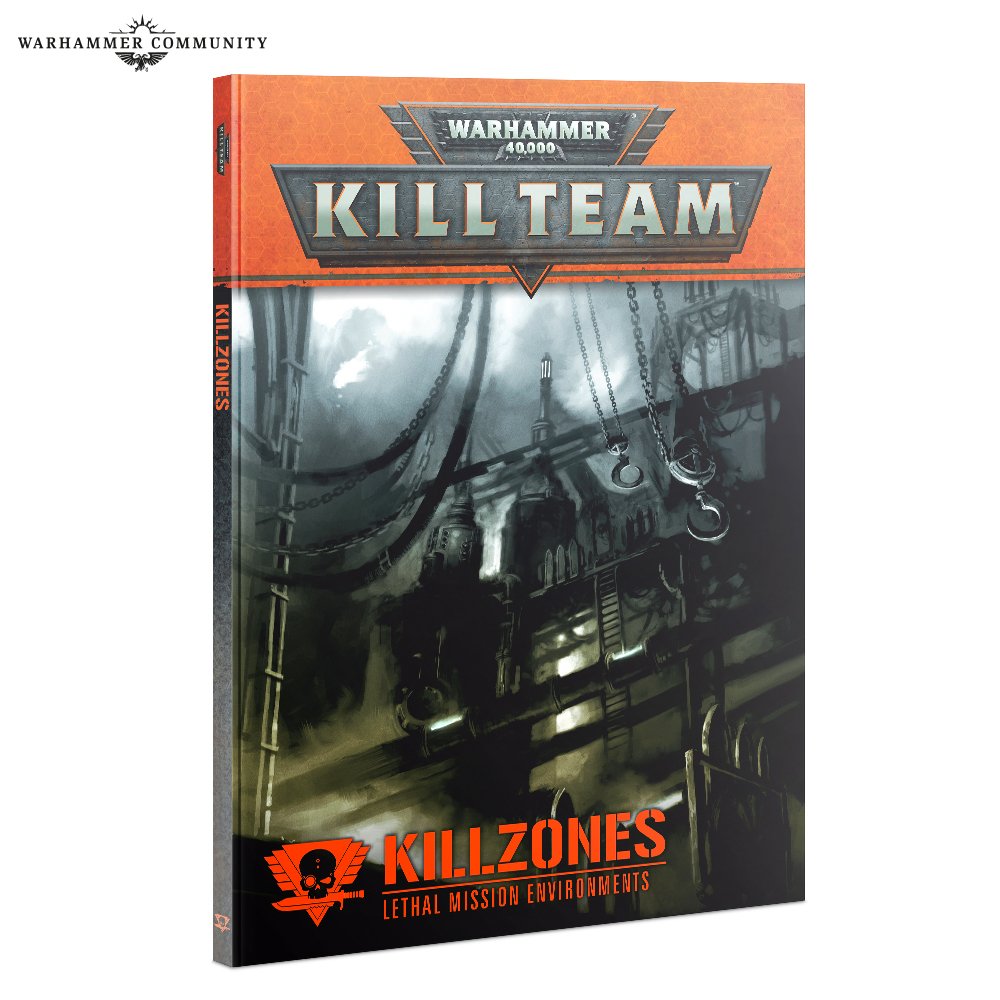 Lost in the shuffle a few weeks ago with the release of Kill Team: Pariah Nexus was the release of Kill Team: Killzones, a stand-alone book/expansion that collects the missions, tactics, and narrative content from six prior Kill Team Killzones. While GW were kind enough to send us a copy of Pariah Nexus to review, I bought a copy of Killzones myself for review. I’m kind of a sucker for campaign and narrative content – if not to actually use then to pilfer for my own campaigns – and I was interested to see if this book did anything new or interesting with the Killzones concept.

These are the six that have received major releases so far, though notably The Truehawk and The Ministorum Shrine – both introduced in Rogue Trader – are missing here. This is a bit understandable however, given that those killzones require a specific board for their missions and aren’t designed to be as generically applicable. Still, it would have been nice to see them reproduced here with more general rules for spaceship and shrine battles.

On that note, if you purchased any of the killzones when they were originally released, the content here will be very familiar. This book reprints each Killzone’s narrative/backstory content – these were 8-page pamphlets with 5ish pages of content in the the first printing – as well as the rules content for its missions, random effects, and tactics. The missions are a bit more legible printed on full-sized pages here but the tactics are a little less useful when they’re not in card form… although that previously could be a bit of an issue thanks to the fact that you’d only have one set of cards for two players to share. Or rather it would be an issue if anyone bothered to actually use the Killzone tactics. Of these, the Sector Munitorum, Death World Forests, and Wall of Martyrs are the most useful and accessible as the rules for Killzones require – or at least imply – that you’ll build your terrain in specific configurations and it’s much easier to do that with the terrain from those Killzones. The Sector Mechanicus terrain is some of the most versatile terrain GW has ever made and being forced to build it in specific ways to get mediocre in-game benefits is a crime. On the other hand, the Wall of Martyrs terrain almost needs no assembly and is modular once assembled, though the downside is that the terrain itself is pretty bad for a game of Kill Team and does little to block lines of sight. The Sector Munitorum is a bunch of standalone objects. The Deathworld Forests aren’t the best 40k terrain kit aesthetically, but they can be improved significantly with some proper basing work.

Killzones in Kill Team are theaters of war for your games to take place in. Each Killzone in the book describes a different potential setting with lots of background describing those settings in the 41st millennium and offers a few examples of worlds and locations where you might find those Killzones. So for example the Sector Mechanicus Killzone mentions Vigilus, Armageddon, and the Messahvak Platfor while Killzone Wall of Martyrs mentions war worlds like Krieg, Mordian, and Shadrath Prime. These are great setting ideas for a campaign and can be really cool for setting the stage for games that happen along side larger games of 40k. Each Killzone is then represented by an Environment table that applies one random rule to the game, rolled before the Scouting phase. One of these is always “no affect” (which is extremely lame, but more on that in a bit), and the other five are loosely themed to represent disparate effects the killzone can have on combatants. Each Killzone also has four missions associated with it, two for Narrative Play and two for Matched Play. These used fixed terrain layouts and are pretty varied in their set-ups. Narratively, they do some pretty interesting things with the mission structure – Extreme Measures for example sees the Attacker as a force behind enemy lines attempting to destroy an important enemy weapons cache. There are Attacker and Defender tactics to set charges and defuse them, which can mean charges can go up or down several times in a game as player control over objectives shifts. Unfortunately setting or defusing charges costs a Command Point, which isn’t terrible but kind of highlights how Kill Team badly needs to add an “Action” mechanic similar to 40k. In addition to the rules for missions, each killzone also has a set of Tactics specific to that killzone. Most of these interact directly with the terrain features, such as being able to swing the crane at someone (which rules), though some are more generic or apply to specific specialisms, such as Comms specialists on Wall of Martyrs killzones being able to impact rolls to end the game.

If these sound really cool well I don’t disagree — there’s some cool ideas here and lots of things that seem really neat! Unfortunately, it doesn’t quite pan out in actual play. First thing is, there’s just too much of it. This is a common issue I have with GW’s attempts at making battlezones/killzones/battlefield effects and it’s present here. Kill Team has a pretty complicated ruleset for a game that’s supposed to take an hour and it already has a number of things that players either forget or just don’t do in games, such as the Scouting phase (which is completely removed in Arena and competitive play). Adding on a number of rules on top of those makes things much more complicated and is likely to lead to players just forgetting rules. Likewise Kill Team already has too many damn tactics to manage and remember and adding a dozen more for each Killzone doesn’t make things better. The random effects for Killzones are also a miss – some of them are interesting but unless you’re choosing them you aren’t going to have any control over when you see them. As usual, they’d have been better off creating a small set of well thought-out rules that are always on for a killzone. Or if you must have a random table, make it D3 with 3 really solid effects and no “no effect” nonsense. If I’m rolling on that stupid table I want something to happen.

On the whole, Killzones in Kill Team are a bit of a missed opportunity. Conceptually they’re meant to add flavor to the game by making the environment matter. This is a pretty great idea, particularly in a game like Kill Team where the smaller scale means there’s more opportunity to do interesting one-off things. The execution on the other hand leaves something to be desired. The rules are too complicated, there are too many new tactics, and asking players to build terrain a certain way to make the rules work isn’t great. These should be the backbone of a cool narrative campaign but they’re also hamstrung by the fact that Kill Team’s campaign rules are just complete garbage and feel like a tacked-on afterthought at best. There are some interesting things here for a GM who wants to build their own content but that’s a very, very small set of players.

If you’re a fan of the Killzones rules-wise and missed one of the boxed sets when they initially released (the most likely miss in your collection is the Sector Sanctoris, which had the weakest collection of terrain), then this will give you those rules in a nice collected volume. If you’re not sold on Killzones or don’t use them, you can skip this book. It’s a high quality volume filled with rules you probably won’t use.