With access to a wide variety of equipment, units, and customization options, Deathwatch may be the faction that Kill Team was made for. The whole thought of a team of elite Marines taking on covert missions far from the main battlefields with the fate of the galaxy at stake – it’s like Mission: Impossible mixed with Warhammer 40,000 and we are incredibly here for it. For an army that encourages you to name every lovingly-painted model, Kill Team is just perfect. But the number of options available to players can also make building a Deathwatch Kill Team daunting. In this article, we’ll cover the basics of building a Deathwatch kill team for Kill Team – good ways to build, strategies to take, and things to watch out for.

On that note, if you’re looking for tips and tactics for playing Deathwatch in Warhammer 40,000, check out our Start Competing: Deathwatch article that just came out.

The core of any Deathwatch list, you can build your Deathwatch Veterans in any number of ways to suit your taste. We won’t go through every option here, but instead we’ll go through the unique options they have to help you get a feel for how you might use them. Keep in mind that any Deathwatch Veteran can take a power sword or power maul together with their ranged weapon unless they take a frag cannon, Infernus heavy bolter, or shotgun. Most of your Veterans are stronger at range, but with 2 attacks with good weapons, your opponent won’t be able to short-cut the game by rushing you.

In addition to the 4(!) Gunners and your Watch Sergeant, you can make one of your Deathwatch Veterans into a Blackshield for 2 points. This buys him an extra attack and the ability to re-roll charges, which can make him into a serious close-range threat when combined with the Combat or Zealot specialisms. Take a power sword or power maul for him depending on the matchup, slap a storm shield on his arm, and watch him go to work.

The Deathwatch Veteran is the only Deathwatch-exclusive datasheet in Kill Team (other than the Watch Captain). On its own, it’s enough to give you plenty of room to build the Kill Team you want to play, but these aren’t your only tricks. You can also add models taken from certain Adeptus Astartes datasheets so long as you pay some additional points for any bolt weapons they have to cover their SIA, usually 2-4 points per model. Here are your options from the Core Rules:

Like Veterans, only bigger and less versatile. They give you +1 Attack and +1 Wound, plus they come with bolt rifles, which provide longer range and an extra AP -1 for your Special Issue Ammunition. Stalker bolt rifles probably aren’t worthwhile compared to the stalker pattern boltgun on Deathwatch Veterans – stick to the standard bolt rifle, and play aggressively to get the most use out of the extra wound. Getting two shots using SIA within 15” doesn’t hurt either. There’s also something to be said for the auto bolt rifle in Deathwatch lists (even though it hasn’t received the additional shot benefit that it got in 40k with the new Codex: Space Marines update) – while it’s usually a waste of a model on other Astartes lists, the extra 9” of range for the second shot with SIA could be worth considering. If in doubt, though, default to the bolt rifle – it’s just a solid gun.

Unfortunately, Reivers are a bit of a miss in Kill Team (and uh, not in Kill Team), being either 3-attack close combat specialists without any AP, or paying an extra point over an Intercessor for a re-skinned auto bolt rifle. Grapnel launchers and grav-chutes can be cute, but when you’re already paying 18-20 points per model depending on loadout due to the SIA tax, you’ll find you’re rapidly running out of room in your list. Terror Troops doesn’t make up the difference, as it doesn’t stack and you don’t have enough other Ld bomb tricks to make it worthwhile. A Reiver sergeant with bolt carbine and combat knife could be worth considering as a Combat or Zealot specialist, as 5 attacks is nothing to sneeze at, even at AP0. However, you can probably find a better investment for 19 points.

With the release of Kill Team Elites, Deathwatch get access to Vanguard Veterans, Terminators, and some new Commander options that give them some additional flexibility and punch. They miss out on the Phobos-armored options and most of the new Tactics, however.

These are tough to justify in an already points-starved list, especially since you have to pay a full 4 points to upgrade their storm bolter if you give them a shiny silver arm. The storm bolter/cyclone missile launcher Heavy is even more deadly here than he is in a “Vanilla” Marines list, but clocks in at a whopping 38 points, more than a third of your Kill Team. It’s worth noting that assault cannon, heavy flamer, or either flavor of Assault Terminators don’t pay a premium to make the jump to Deathwatch, so they may be worth looking into. You can also deep strike them using the Adeptus Astartes Teleport Strike tactic, letting you drop one 5” away from your buddy’s favorite model without warning. Ultimately, Deathwatch Terminators are usually going to be one-off adds to a group of Kill Team Veterans. 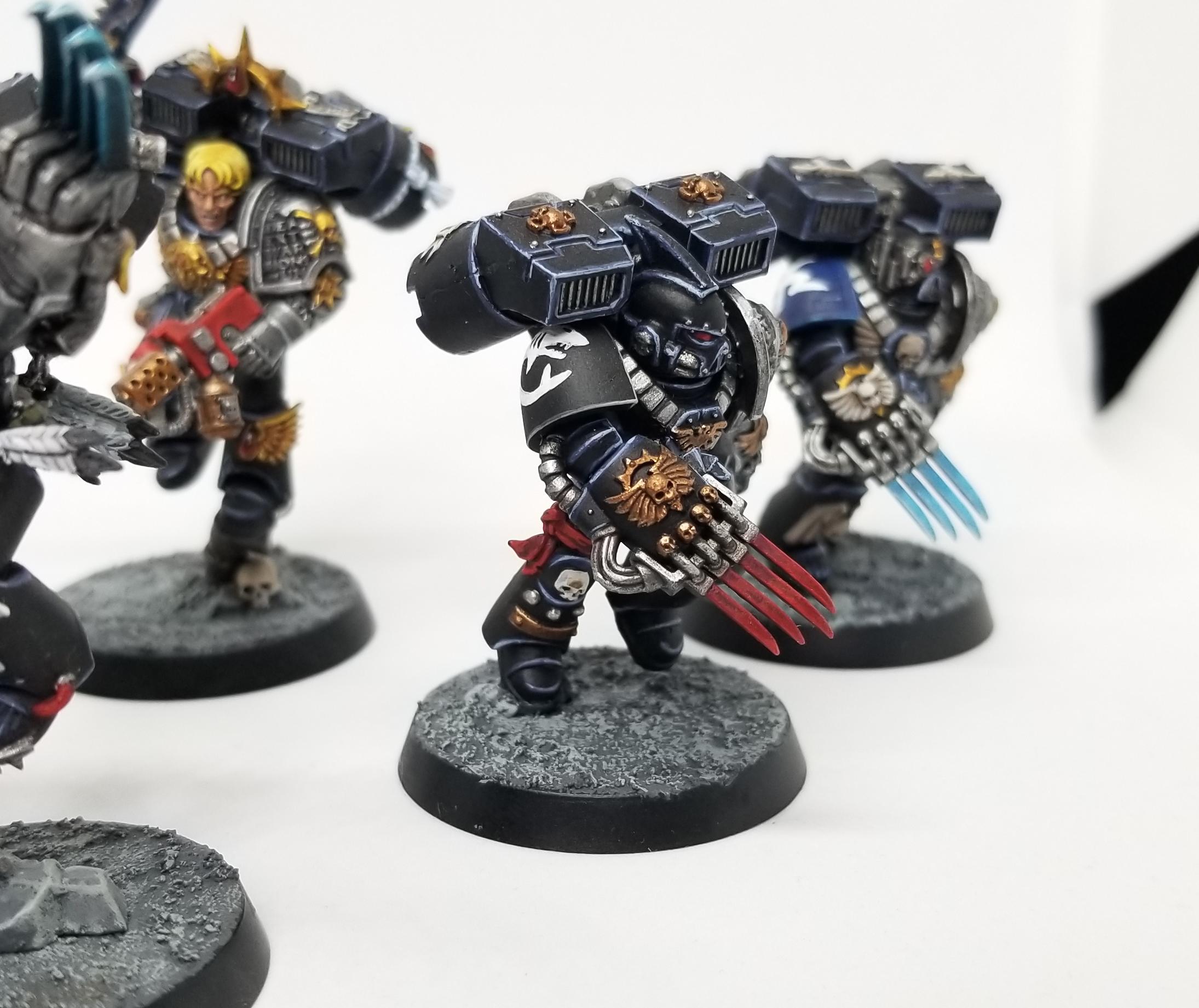 Nearly as customizable as the Deathwatch Veteran, but entirely focused on close-range damage, your Vanguard Veterans start at 19 points before adding on any wargear. You can build these guys with melee loadouts or, if you want to try something different, with a pair of pistols. SIA bolt pistols cost the same as plasma pistols, so for 23 points, you can mix-and match those choices to your heart’s content and having a decent chance of forcing two injury rolls on the same model. Unlike Terminators, these guys don’t get access to the relevant Adeptus Astartes tactic (Jump Pack Assault), so you probably won’t want to deploy them in reserves. That’s fine, though, as they can move 12” and ignore terrain when doing so, which will more often than not result in them being exactly where you want them anyway.

Deathwatch have access to most of the same Commander options as standard Space Marines, though they get exclusive access to Watch Masters. The other options are all pretty standard, with Librarians offering the most value without having to spend CP. Note that you’re going to want to give each of your commanders as many bolter shots as possible to take advantage of Special Issue Ammo, so look at storm bolters wherever possible when you’re kitting out characters that give you shooting options.

The Deathwatch’s exclusive Commander option, Watch Masters are pretty expensive compared to Primaris Captains. The upside is that the Custodian spear they get is a very solid weapon in Kill Team, giving you access to Special Issue Ammunition and a multi-damage melee weapon. The Watchmaster also gets you access to a better re-roll aura stratagem, but you pay for the boost with an extra CP. If you’re going to play Commanders in Kill Team, you may as well bring this guy.

Deathwatch Librarians get access to the same spells as Marine Librarians, namely Null Zone, Might of Heroes, and Veil of Time. You’ll get to pick two of those, plus Psybolt. All three of the powers they can choose are pretty useful, depending on your Kill Team’s strategy and who you’re up against.

Deathwatch had access to 4 tactics in the Kill Team core rulebook, then received 6 more in their starter box. Thankfully, their Core Rules stratagems are (mostly) pretty good.

Deathwatch have access to some of the most dangerous weapons in the game in their unique arsenal, and can outfit every single Deathwatch Veteran with the equipment they need to be deadly at any range.

The Arena expansion brings some serious changes to the game, including shorter sightlines, doors that you can use to manage how your opponents can engage, and selectable secondary objectives. In order to win in Arena, you’ll need to adjust your play accordingly.

Arena Objectives: Play to your strengths here – you’re one of the deadlier factions around, but aren’t quite as survivable as Adeptus Astartes or Custodes, and don’t have the numbers to contest board control against a lot of lists. Focus on objectives that involve taking enemies out of action.

Most of the rest of the objectives have to do with board control or positioning, aspects of the game you won’t excel at until after you’ve thinned out the hordes. Focus on objectives that reward you for what you’re doing anyway: clearing the board with overwhelming firepower.

Here’s a basic roster that gives you everything you need to be flexible in regular games or 125-point LVO format games.

For all the frustration Deathwatch might bring you in standard Warhammer 40,000, they’re a blast to play with in Kill Team, and can support a variety of different playstyles. Regardless of whether you kit out your Command Roster to take on all comers and compete in cutthroat events or just run a few guys for beer and pretzels, the important thing is that you name every single model in your kill team and write up an elaborate backstory for them, so when they die ignobly on turn 1 you can raise your fists heavenward and shout your frustrations at the uncaring gods who have cursed you thus. Have fun!