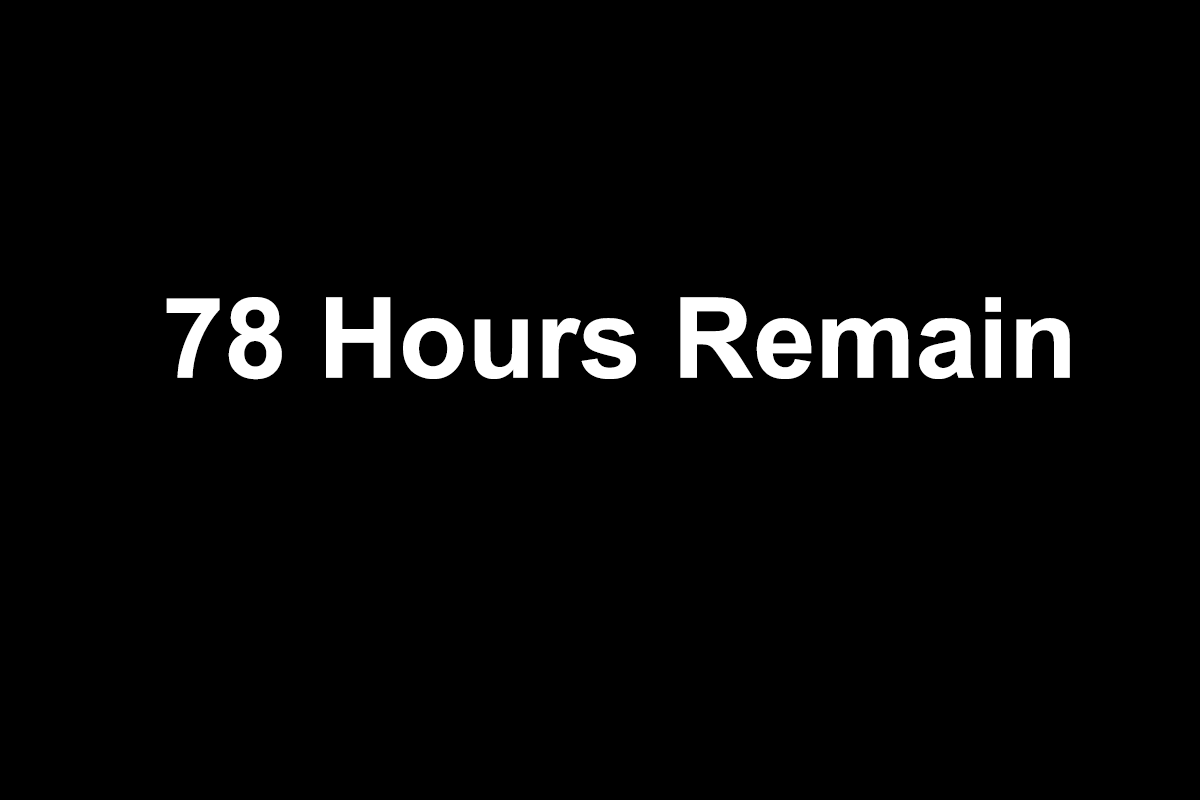 78 Hours of hobby time left until NoVA. Last time I posted, I had finished up my Red Corsairs and the Spiky 17. And look, 78 hours is not a lot. But I’m not sweating it yet. In fact, I’m feeling pretty good about progress, because over the last two weeks I finished what will probably be the single most time-intensive model in the army.

Yep, Abaddon the Despoiler is DONE.

I’m not going to sugarcoat it; Abaddon wasn’t exactly a joy to paint. He’s a big, complicated model with a ton of detail and different bits, he’s got a ton of potential subassemblies, and he’s the most important model in the army, so he basically had to be the best model I’ve ever painted for me not to end up feeling like I’d fucked up. The good news is that I think I knocked this one out of the park, and I’m incredibly happy with how he turned out. I’m basically kicking my feet up and reclining my business-class seat on the train to smugville over here. 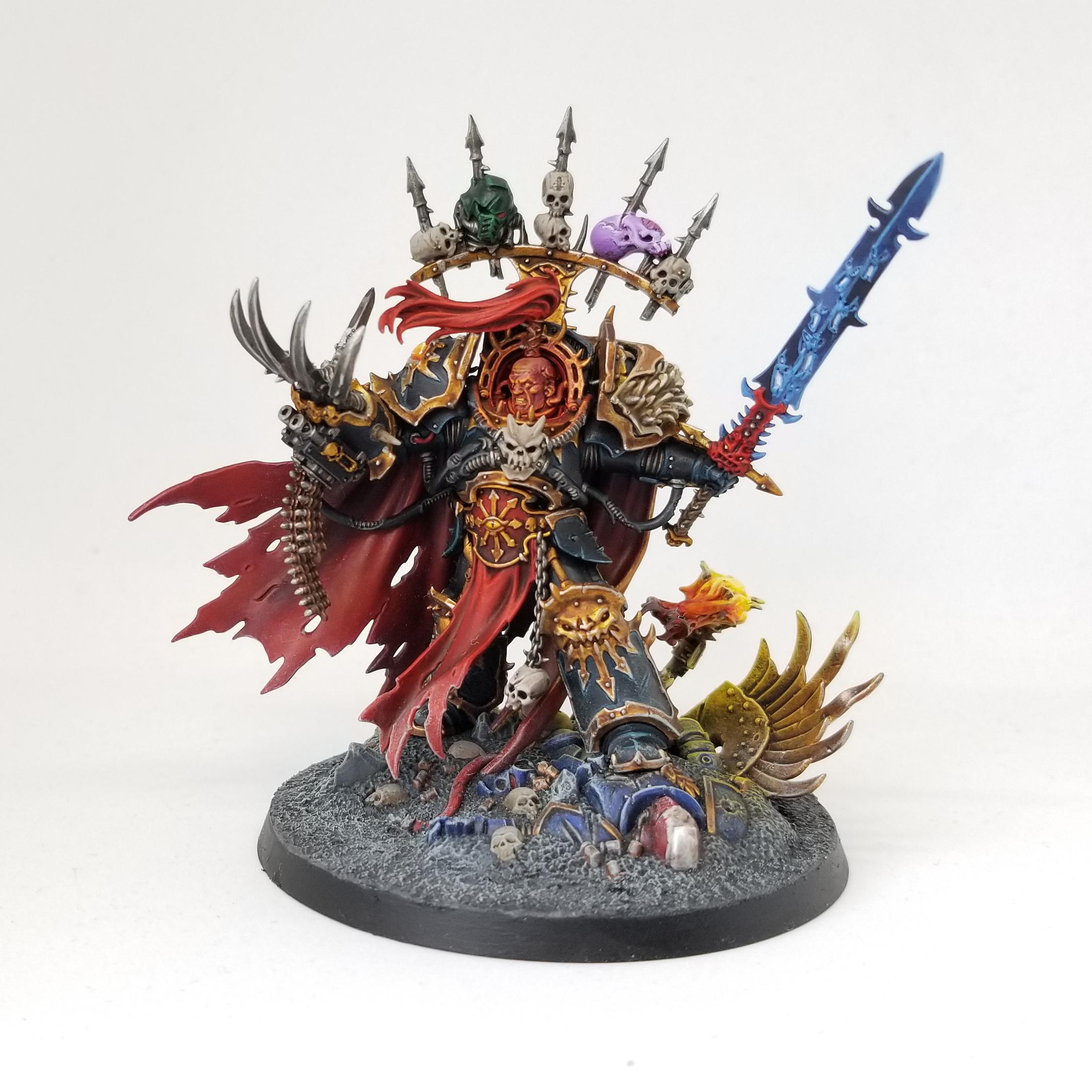 I tried to do some orange lighting on the head, to mimic the effect that artists do on Terminators (and Abaddon/Horus specifically) so often. Overall, I think the effect works better in person, but it’s a little duller than I’d like it to be — I think it could probably use some brighter highlights to really sell the effect, but most of the face painting was done before I glued his armor together around his torso and at this point I’m not confident I wouldn’t just ruin his face or overdo it with the Fire Dragon Bright. So I’ve decided that it’s good-enough as-is, and I’m happy enough with it to live with that.

On the back I decided to do some OSL around the torch, and I’m happy with the effect there as well. It’s a mix of shading up to yellow, drybrushing, and using Iyanden yellow contrast paint to smooth out some of the transitions and I think it works very well. I debated doing some blue OSL around the sword but ultimately I think that would have been too much and made the model too busy with regard to OSL effects, so I stuck to the torch and the face. 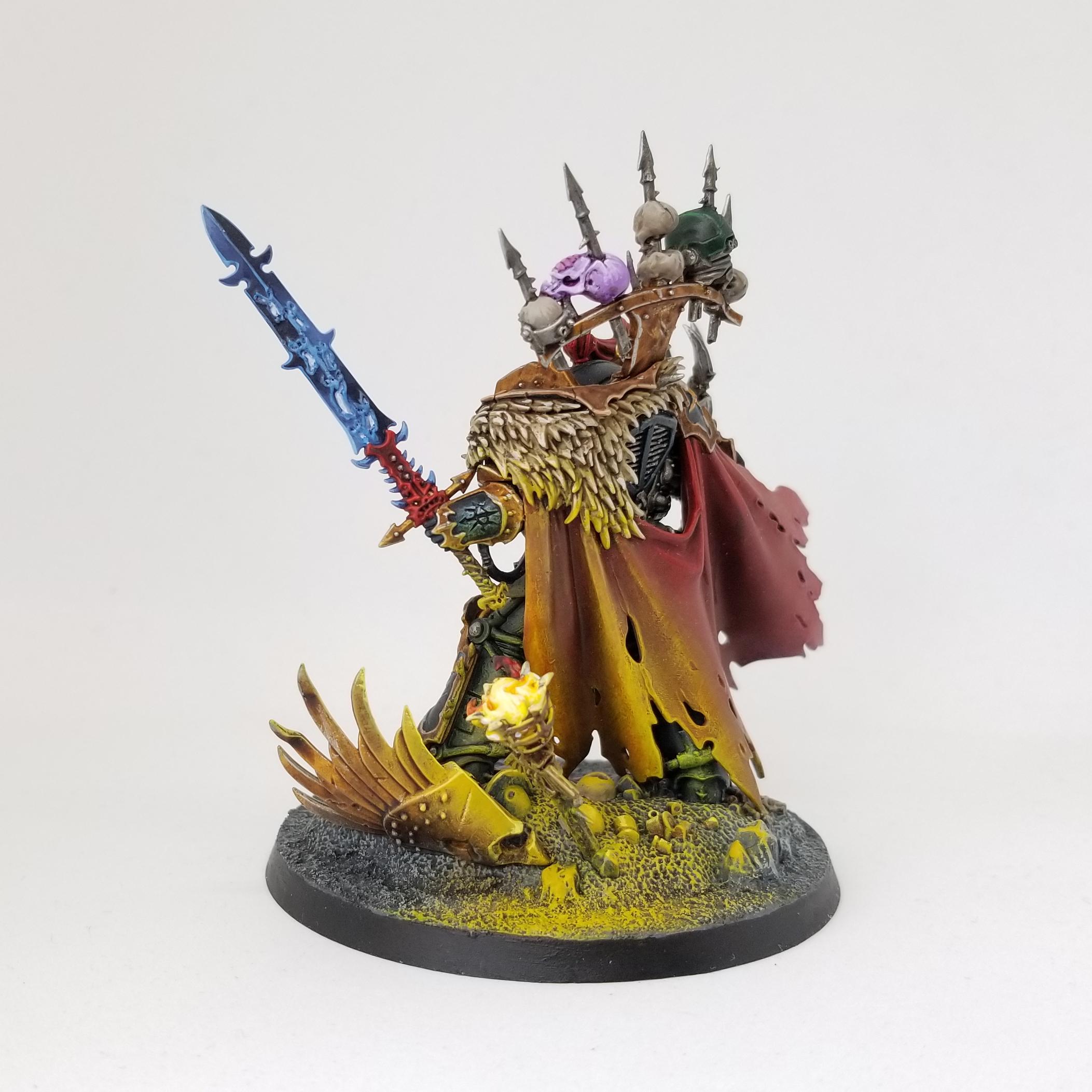 I’m planning to do a How to Paint Everything article on just Abaddon in a week or two, so I won’t go into too much detail here, but as an extra bonus I do have a side-by-side of new Abaddon with the one I converted a few years ago when I was just starting the Black Legion army. He’s made from a Terminator Chaos Lord with metal Abaddon topknot, talon, sword, and trophy rack bits. I used greenstuff and a plastic vehicle sprue skull to make his chest plate. I was pretty happy with the conversion, but I’m not sad to be done with the guy.

Anyways here’s the Abaddon version of You vs. the Guy She Told You Not to Worry About 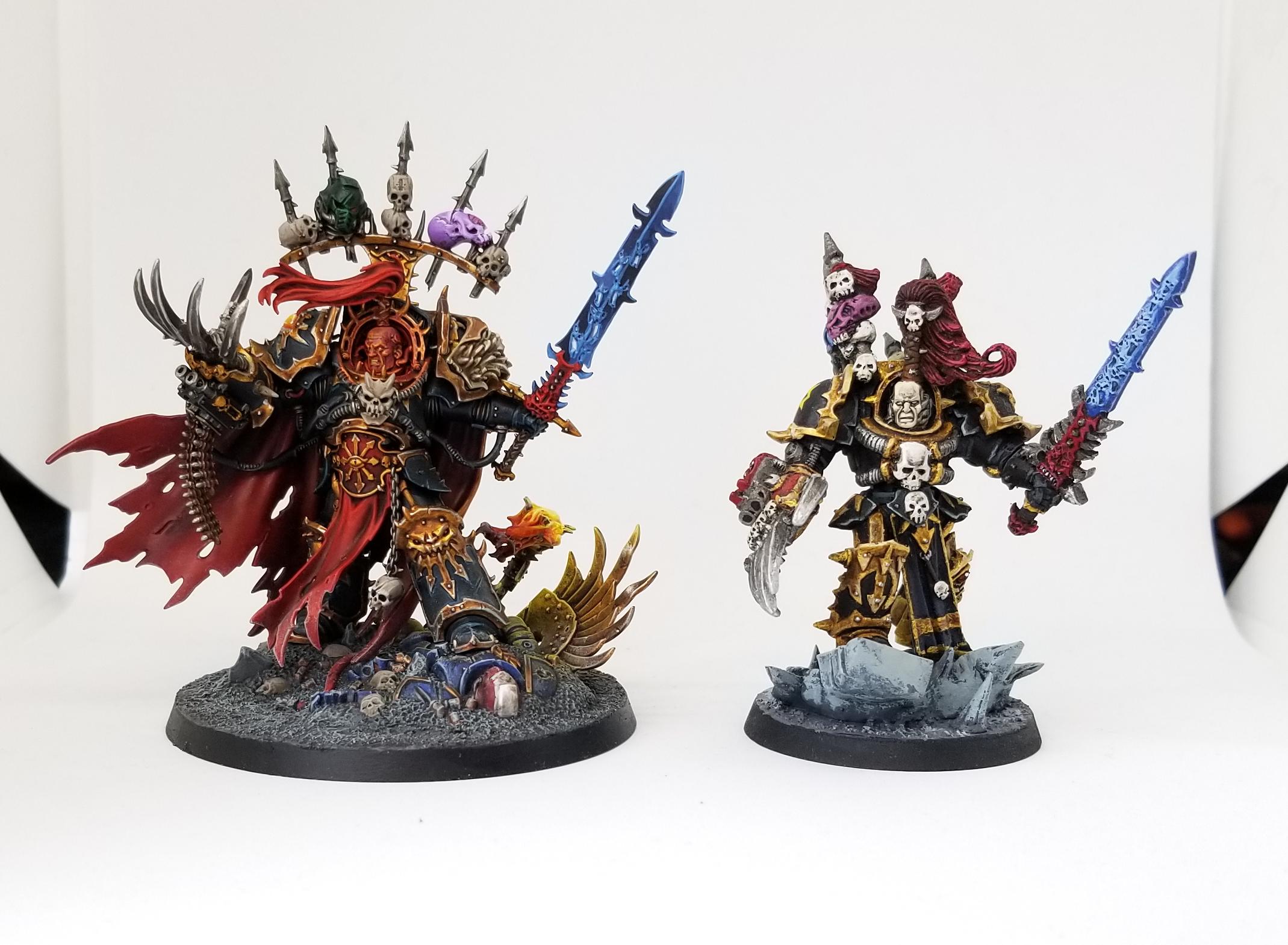 I had originally budgeted 40 hours for painting Abaddon. By my estimates, he took closer to 25, which puts me ahead of where I thought to be. Overall, that leaves me with the following queue if I stick to my original plan:

That’s not too bad! I think the Lord Discordant will take the longest of the stuff that’s left, just because he’s got the most detail and those fleshy tentacle bits that are kind of a pain in the ass to paint. I’m also not sure I have a full 30 cultists with autoguns, but I can probably sub in some Traitor guard models from Blackstone Fortress. I have two sets of those, so that should give me another 10 guys to act as Cultist proxies, give or take.

We’re about a week out from seeing Chaos Knights in all its glory but at this point I expect to stick with the Kytan in my plan. Having a knight-type unit that can benefit from auras seems better than having a few stratagems unless one of them is completely broken (which I’m sure they will be). At this point, changing to Knights would probably require me to be so far behind on my queue that I couldn’t paint the Kytan, but I don’t expect that bad boy to take that long to paint.

I’ll probably have another update in two weeks here, hopefully having fully painted the Lord Discordant and/or the Dark Apostle. If I can keep up the pace I’m going, I won’t even break a sweat over the deadline.