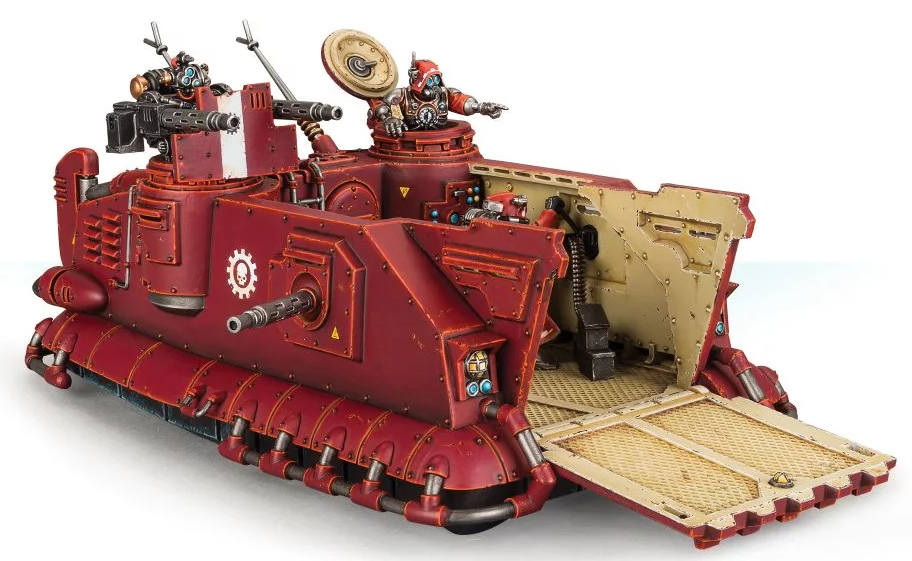 Greetings to you, devoted servant of the Omnissiah! Admech have been one of the more popular factions in 40k of late, but there are many (including myself) who felt the roster had a number of holes that needed addressing in order for the faction to feel ‘complete’ and fully able to deliver the will of the Machine God efficiently. Thankfully – reinforcements are on the way! I’m here today to talk about the upcoming dual kit release of the Skorpius pattern tank. More specifically, I’ll be discussing where these two new units fit into this faction contextually, and crunch the numbers to hopefully give you more of an idea of what to expect from these units when you put them on the table. Today we’ll be talking about the Dunerider, a rough and ready transport for our troops: 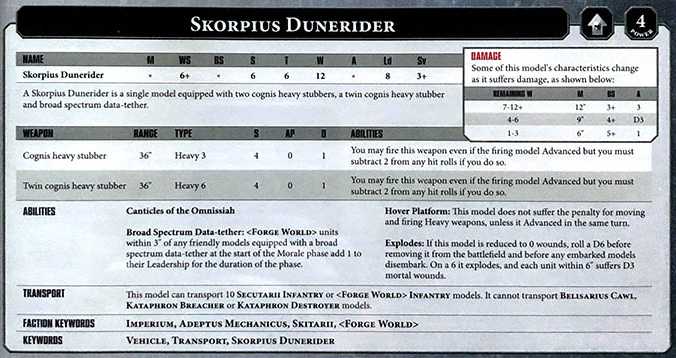 But how does the Skorpius Dunerider compare to similar options at our disposal? Let’s first establish context which would give us the right mindset when assessing this new unit.

Where Things Stand for the Faction

Currently, the Adeptus Mechanicus play a mostly defensive game, relying on a strong Shooting phase and some flexible counter assault units to establish control of the battle. After playing a great number of games with the faction, I’ve come to identify two areas where I personally find AdMech to be somewhat lacking:

My current approach is to look to allies – Custodes Shield Captains on Jetbikes make for exceptional strategic units that help me better establish board control and Ironstorm missile pods on Imperial Knights let me harass lightly armoured units hiding behind cover. In matched play this means that the limit of three detachments can have a confining effect on my ability to generate CP. If either of these new units can address these shortcomings and improve the army’s flexibility, I will be thrilled!

So does the Dunerider pass this test? TO THE BLACK BOARD!

Doing the Maths On the Dunerider Weapons

So to start – let’s talk about the transport. Transport rules are somewhat sketchy in 8th edition 40k. Disembarking before vehicle movement creates real challenges for assaults, and most transports seem to be overpriced by about 30% to 50% in terms of points costs. Generally, players tend to not take transports unless they fall under two categories:

The Dunerider unfortunately lacks the Open Topped rule so it doesn’t fall into the second category, which isn’t a fantastic start! However, if it ends up being very efficient for its cost it still has a lot of potential provided we are interested in transporting close range troops to the front lines and improving army mobility. The Dunerider comes with a twin cognis heavy stubber and two cognis heavy stubbers. That gives us a pretty good idea of the firepower its packing as we’re already aware of the stat-line of a cognis heavy stubber:

A twin and two singles gives us a total of 12 shots heavy stubber shots. For the purposes of this test we will ignore unrealistic targets for this weaponry and instead focus on some of the more common statlines we might see:

Now obviously there’s a lot more you could point these guns at, but this should give us a realistic spread of targets and effectiveness. For this experiment, I have deliberately ignored the idea of pointing any guns at tougher things like Wave Serpents or Imperial Knights, as I believe those choices are only made in times of tactical desperation and should in general be disregarded. Come on faithful Servitor, turn the cranks while I perform the rite of numeration!

The above numbers represent how many unsaved wounds you can expect to deal each turn when firing all three guns into the same unit. The numbers that really stick out here are for the Termagants and Orks, where we can see that these weapons excel against units that lack decent armour saves. The Dunerider costs 73 points, and if each volley will clear out an average of 21 points of Orks or 16 points worth of Tyranids, we can see that it will take several turns to earn the Dunerider’s points back. So the transport isn’t going to set the world on fire in terms of potency but this is a dedicated transport so we shouldn’t expect too much. Ultimately, what we have in the Dunerider’s shooting is that it is a chaff clearer – something that can shoot holes in screens while acting as a mobile platform to boot.

For the purposes of comparison I’ve decided to take three different units that I consider to be quite good when it comes to killing lightly-armoured infantry: Skitarii Vanguard, Ironstrider Balistarii and Kastelan Robots. By comparing units of roughly similar cost we can start to draw conclusions from there. For the purposes of fairness, we’ll take 9 Skitarii Vanguard (72 points), a single Kastelan Robot with a full complement of Phosphor Blasters (110 points), and an Ironstrider Balistarii with a Twin cognis Autocannon (60 points).

The Vanguard come out on top (which isn’t surprising considering how cheap they are for their gun), but what stands out is how competitive the Dunerider is with our other vehicle choices. The Kastelan’s potency doubles if it’s in Protector Protocol mode, but that comes with the added expense of a stratagem to change the Protocol (or spending extra points on a Datasmith), as well as tying the Kastelan in place. I do like the Robots for their pure firepower but have never been fond of the tactical limitations they impose on you.

We can also start to work out how many points we’re paying for each unsaved wound. We’re looking at just points per wound against Horde units here, as none of the above are particularly good at cracking heavily armoured infantry. After taking an average of three targets – Termagants, Fire Warriors and Orks, here’s our results:

Pretty good, actually – the Dunerider beats out all but the Vanguard (and Kastelan in Protector Protocol mode) in terms of efficiency when it comes to killing Horde units. That’s pretty exciting when you consider this thing is also a pretty good transport on top of that firepower.

Analytics are useful as a baseline, but the unit’s role in your army list is equally if not more important – context is key! I believe that it is currently still too early to properly evaluate the Dunerider, but I believe that it has potential in the current environment and because it can fill a role that AdMech don’t have a great alternative solution for at the moment. While the shooting is less ideal than I’d like, it doesn’t compare unfavourably to the Kastelan Robot, trading the ability to double up on shots for far more mobility and less dependency on external buffs/stratagems.

I am excited to test out the Dunerider in a few ways. First to see if it can help unlock the potential of Fulgerite Electro-Priests as a melee option. They’ve always been an exciting prospect at our disposal, giving us a mortal wound machine as well as a durable melee threat if we can get into melee combat and if we can destroy a unit with it to enable the unit’s 3++ Invulnerable save. Sadly that challenge has kept it from widespread use – as a foot-slogging unit without natural deep-strike mechanism and with mediocre-to-bad resilience to survive running across the battlefield, it just wasn’t worth trying to make them work. Now that the Electro-Priests can sit inside the Dunerider in deployment, we can effectively shield them as they either move up the table to to get them right up in our opponents face, or we can disembark them we we need them to screen or counter-charge units approaching our own gunlines.

Another possibility is to just to stuff the Dunerider full of Vanguard; these efficient killers are obviously more than capable of footslogging it with assault weapons and advancing, but the Dunerider makes a strong argument for trying out two minimum-sized squads of Vanguard, each armed with two Arc Rifles for maximum firepower. Turn 1 sees the Dunerider moving forward and and trying to stay out of sight and then on turn 2 the Vanguard disembark and unload 8 Strength 6, AP -1 shots into some poor unit of infantry (or Vehicles for that juicy D3 damage) as well as 18 S3 shots from the Radium Carbines. The Dunerider not only protects them from anti-personnel guns if you don’t seize the initiative turn 1, but its high Movement also opens up the possibility to get in range to charge enemy tanks and shut down their shooting for a turn. There’s certainly enough firepower there for 169 points to be worth considering, and if you’re taking double battalions, you’re going to be including the troop choices anyway. At that point why not fork out the points for a transport that can be a nuisance to your opponent’s gunlines?

Do you think I’ve missed something in evaluating the Skorpius Dunerider? Let me know! Discourse is the most useful tool we have as players, and we should always welcome it. Next time we’ll be covering the Disintegrator and seeing how it fares against the stalwart Dunecrawler, the Kataphron Destroyer and the Balistarii for delivering a long-range punch!