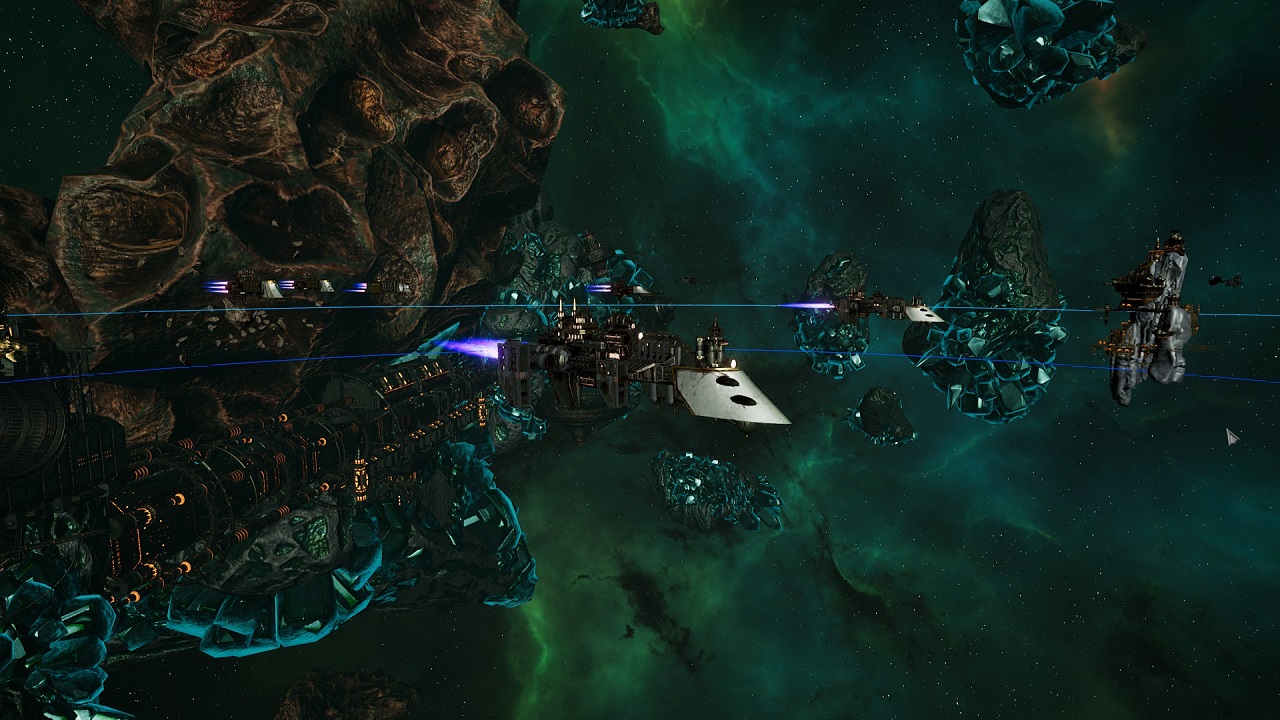 We return this week with probably the current flagship 40K video game, given Inquisitor’s rocky track record and Mechanicus being a budget title. It would seem fairly odd on first blush that this duty would fall to one of the secondary rulesets in Games Workshop’s wide product offering, but two competing pressures made it so: first, Games Workshop seems willing to tolerate a higher degree of fidelity from video games to the tabletop when they’re based on alternative systems that don’t threaten model sales of its core systems of Warhammer 40k and Warhammer: Age of Sigmar; second — and more importantly — Dawn of War 3 was a complete dud.

That doesn’t mean the game is for everyone, of course; not even everyone who theoretically likes space naval combat. Warhammer 40K: Battlefleet Gothic Armada 2 is, at its core, a game about positioning more than it is a game about anything else, which shows extreme fidelity to its tabletop roots, but it is also a real time + pause game in single player and a straight real time game in its multiplayer. Obviously it would have to be one or the other to have a multiplayer component — you can do turn-based multiplayer, or you can do real time multiplayer, but you can’t do “real time but I get to stop and think about it.”

This makes the game — all of it, because honestly in any real time system pause is a crutch — a game about cool heads and good micro in an evolving tactical situation. That’s pretty good for high level play! It also means a lot to keep track of, and it’s not a particularly forgiving game to newcomers — if you play the multiplayer mode, you will be earning your wins. The multiplayer scene for Armada 2 is in the late prime of its lifecycle, where it’s active but many players you will run into will know how to play the game at least competently and usually fairly well, and you will need to know how a number of fleets beyond those well represented in the single player campaign material work, most notably the Orks, T’au, and the Drukhari.

I was, as you might surmise, not very good in the multiplayer games I tried for Armada 2, but I could appreciate the level of skill involved in them. One thing playing multiplayer will make you realize on a comprehensive, holistic level, however, is the main failure of the Armada 2 single player: the computer simply can’t play the game very well. This makes a certain sort of sense, as competitive AI is very difficult to program in the first place and outside the scope of most normal development duties for programmers, so it takes specialists to make it work right; Armada 2 then compounds that challenge by making many of the races function significantly differently from the others, which in the multiplayer is good but a balancing nightmare — and in the single player just means a lot of bespoke work for each faction.

The true losers here, as most people familiar with the game are already aware, are the Aeldari. Even their faction-specific AI is unable to keep their ships moving a full 100% of the time, like the faction demands for even competent play. AI Aeldari on any difficulty up to hard — I didn’t try the highest difficulty setting, but easy through hard will represent the majority of the user experience — will routinely stop to aim big, powerful alpha strikes that are completely inappropriate to the situation they’re in. The reason this is all a problem is that the Aeldari fleets have a mechanical quirk where their shields don’t go down so long as their ships are in motion…but as soon as they stop moving, they’re very vulnerable. They also don’t react to ramming attacks with the severity those attacks deserve, but that’s hardly a knock on the Aeldari AI alone; you can reliably get through much of the Imperium of Man campaign by just running your ships into the enemy with a slight bit of discretion and then hitting your afterburners: not only does it do compounding damage as you shove your target, it completely depositions them from whatever it was they were trying to do in the first place, and usually puts them in a situation where they have to execute a quarter turn or more to even get back on track.

The single player campaigns are a slightly different beast than the multiplayer, but in a way that should train you for it, eventually, at least in terms of your conceptual thinking about fleet construction. The goal in them is not to win every engagement with overwhelming firepower. The goal, really, is to find a way to win the tactical layer engagements with navies small enough that you can move through the systems you need to take as rapidly as possible to secure a resource base, have enough navies on hand to both expand and defend your territories, and move through the game fast enough that the threat meter doesn’t max out and you suddenly end up with four sector invasions a turn. These can get nasty – sometimes they occur with the full 1200 fleet capacity that gets used for putting together multiplayer configurations. In turn, this means that to be successful in single player, you need to win engagements at fleet parity, and to dominate single player, you need to be able to win while in the hole 100-200 fleet points. If you’re intending to rely on the auto-battle while prosecuting a single player campaign on anything other than easy difficulty, you will lose.

This is slightly less true of the Tyranids, who can mass their fleets to an extent because they don’t particularly care about protecting territory since they eat systems and move on, but for the Imperium, Necrons, and Chaos it’s an excellent guideline. Learning to win with one ship of the line and a couple escorts becomes key in some of the picket defenses, since invaders don’t respect the movement lanes between systems at all and will just invade from the outer darkness of the void, sometimes on your most remote holdings. Earlier games like Dawn of War II, especially in its expansions, tried to get a strategic layer like this working; the successes there were moderate and workable, but they never managed to balance the risk reward like Gothic Armada 2’s strategic layer does. At least not that I recall; I’ll soon have cause to find out. More on that in a bit!

Once you figure out that just playing the strategic layer won’t save you and you actually on some fundamental level need to interact with the intricacies of the game, Gothic Armada 2 is a good one. It doesn’t align much with my personal proclivities, and I find the story — which is mainly about reacting to the wake of Abaddon and his Thirteenth Crusade in the metaplot — a bit threadbare at times, but I can recognize a well-executed product for its market space when I see it. I’m just not much of a navy guy when it comes down to it – I prefer something of a more personal touch with characters I can interact with, and voiceover lines before battle don’t quite do it – and the learning curve can get quite steep. Still, you can order your ship to ram an opposing ship into an asteroid field where the damage over time effect kills it, and that counts for something.

Next week, as alluded to above, I begin a loving trek through the Dawn of War series of video games, which will begin with Dawn of War: Game of the Year Edition, which apparently doesn’t have the option to rebind moving the camera to WSAD. Should be fun!