BLUNDERDOME, ROUND 2: THE MATCH-UPS

Welcome back, dear reader, to the second round of BLUNDERDOME! Last week we set our first round match-ups and forced our poor, stupid generals to play with their awful, dumb lists in a series of the worst, dumbest games of 40k ever played. And you loved it! So this week we’re back with more of this nonsense, ready to collect your sweet, sweet click juices.

Before we dive into this week’s matches, let’s recap THE RESULTS:

Round 1 was exceptionally dull in that it held no upsets or special surprises – every higher-seeded team beat every lower-seeded team.

Going by our scoring rubric, which rewards players for winning their games and for having the lists they built lose, that leaves us with this current scoring:

That’s right, GREG is officially winning this tournament one round in. He’s got both a clean win (3) over Chase, plus his T’au list lost (3) to Drukhari, and on top of that he scores 1 bonus point for having his list voted worst overall. Meanwhile on the opposite spectrum, Rob and Chase are currently in contention for “being a couple of dumpster-ass yabbos” with zero points each. Chase’s loss is particularly funny by virtue of the fact that he lost to the list he built.

In round 2 we’re continuing our single-elimination bracket, so the losers of last round’s games will play again this round, and then we’ll re-seed the winners in order to get them into more games in a way that makes some kind of sense. 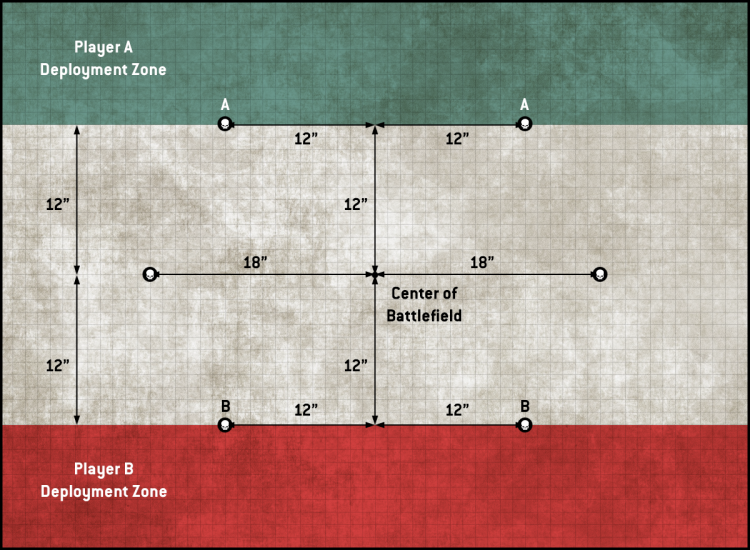 We’re switching it up this round, moving to a dawn of war deployment map. We’ll do hammer-and-anvil next time around. Having Hold 1/Hold 2 as primaries and 2 objective markers in the deployment zone is a big help for slower, non-obsec armies, who can now reliably score 40 points on primary with bad units that are just really difficult to kill.

Last round Greg managed to knock chase off playing against a bunch of Leman Russ vanquishers but this week he’s up against a real, actual list from an army that can’t really make bad lists. The Drukhari list is the consensus best pick here and I don’t think anyone expects it to do anything but coast to an easy win. Sorry, Greg. Your streak of 1 winning game of 40k in the last two years ends here.

Honestly the best part about the chaos marines list – apart from the cultists not fitting into the stupid rhinos – is hearing Liam complain about playing it. There are so many models that do so absolutely little on the battlefield besides take up space. The cultist list is basically a dream come true for the Daemons list, who will have a great time plowing right through multiple cultist squads per turn with Brass Stampede, marking it the first time that stratagem has ever actually been useful in a game. 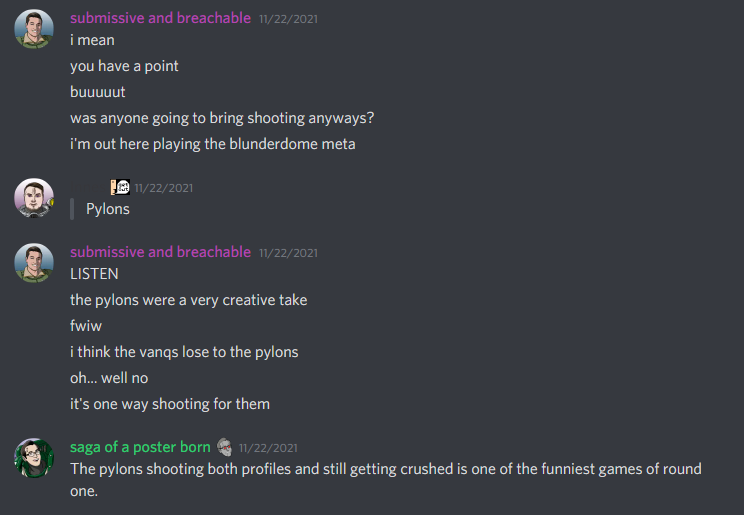 Our first true heavyweight fight – a Necrons army that only has 4 units that can move against a Tyranids army that’s mostly exploding bladders of corrosive gas. The Necrons get a huge boost from the mission here – in Sweep & Clear they couldn’t really hold more than one objective, but here pylons can easily hold two at all times, freeing the list up to go after secondaries. For their part, the Tyranids have no way to meaningfully damage a Pylon and will struggle to even hold two objectives given the small number of non-character units their possessed of.

Our final match-up of round 2 pits a series of tanks against an army of drones and weaponless Crisis suits. Those tanks don’t do much damage, but they’re also very tough to kill, particularly when all you can do is throw drone against them and hope that the endless stream of hovering pods will eventually dent a hole in the tank’s armor. There’s also a lot of shame on the line here because losing to that T’au list is just utterly reprehensible shit. Unless you have the Tyranids list, which is obviously the worst list.

Next Time: The Round 2 Results

That wraps up our round 1 preview. Next time – probably Friday, unless one of the games can’t be scheduled – we’ll look at the round 2 results and see just how these hilariously bad match-ups shook out. If the update isn’t on Friday, it’ll be Monday, so stay tuned. And in the meantime, if you have any questions or feedback, drop us a note in the comments below or email us at contact@goonhammer.com.