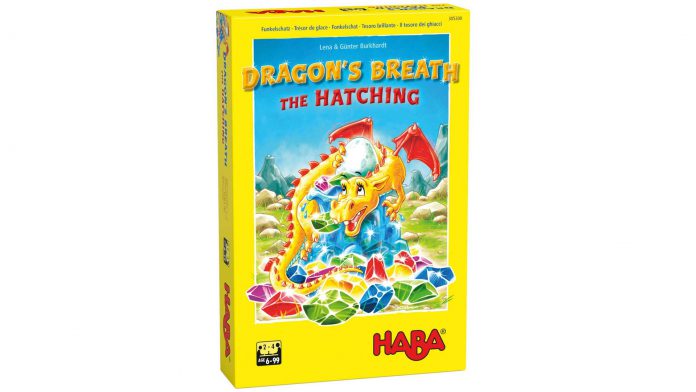 We’ve previously reviewed Dragon’s Breath here – it’s a relatively simple game, but my son loved it. In part because it’s simple, and in part because it has a dragon on the cover. It’s one of the few games he can play with his friends now without my having to play, which is pretty cool.

However he’s also rapidly growing out of it. Dragon’s Breath is competitive but it has no actual strategy; it’s purely a luck-based game and so that means that the value is largely in collecting things and counting. So when my son asked me to buy the follow-up game, Dragon’s Breath: The Hatching, the last time we were at the local FLGS, I agreed.

In a lot of ways, Dragon’s Breath: The Hatching is a great next step from the original. Players take turns taking on the role of the Dragon mother protecting her nest, while the other players attempt to take treasures from her. Similar to dragon’s breath, the game uses a stack of plastic rings to represent ice to melt, which are then filled up with plastic gemstones and topped with an egg. Each non-dragon player gets three random cards with different gem configurations on it, and each round the dragon player “melts” the top layer of the ice by removing a ring, and players alternate taking gems from the ones that fall out of the stack and matching them to their cards.

Players complete cards by matching all the gemstones on a card, i.e. yellow-red-yellow, and each card is worth a varying number of points; 2 color cards are worth 2 points, 3 worth 3, and the 3-stone wildcard card (which lets you pick any color for its stones) is worth 1 point. After all three rings have been removed and the stones collected, control of the dragon passes and the other players take their turns collecting gems. At the end of the game the players tally up their points from cards and the player with the most points wins.

As a progression of Dragon’s Breath, the Hatching is pretty great. There’s actual strategy and decisions to consider in which stones you take, since you want to deny your opponents and plan ahead when filling out your cards. My son didn’t quite pick up on this initially but he started to figure it out as we played, and it was cool to see that happen. On top of that, tallying points at the end of the game is a great opportunity for doing simple math, since you’ll likely have to add up cards to a total of 12-20 points in a 3- or 4-player game. If you picked up Dragon’s Breath and wanted something more involved, this is a great pickup.