As 2020 drags to its conclusion, our team haven’t slowed down, painting a ton of excellent new models. Check them out here!

As usual a bunch of Necrons and some Marines from me, I am starting to be a bit repetitive at this point! I am feeling the itch of doing something different though so I might either do some one-offs or start another army of some type soon. I am getting tempted by some infinity models at the moment…

I also have Green Space Marines! I’m slowly working through the backlog of models I bought in Spring but never figured out how to finish until now.

First up is the Indomitus Captain, sitting on the sidelines since August while I built up the motivation to spend a day working out how to paint molten blades. I think they’ve come out well; they’re a blend from mephiston red through wild rider red to VGC Hot Orange, with a line of GW Yriel yellow and a yellow glaze to tie it together.

I also finished this guy in a marathon session, painting the cloak with skeleton horde and gore-grunta fur contrast paints. They make a very nice looking leather for the robes and I will definitely be using that combination again in the future.

As I teased last month, I was working on some Iron Golems. Well, after I decided to make the compounding bad decisions of “don’t do a test model”, “batch paint 16 models at once”, and “paint the armor first then struggle to paint around it”, they’re complete!

I even got a game in with them, where they valiantly held the middle of the board against a Dwarf horde for a few turns. They don’t hit hard, but boy howdy do they not want to die. Rerollable 4+ saves are no joke.

Last but certainly not least, I am firmly back on my bullshit and painting Space Marines again. Of course, my particular flavor of bullshit consists mostly of hazard stripes and hotrod flames:

The model went together in no time, as befits its easy to build status. This also meant the guns are easily swappable, and I didn’t even have to magnetize anything:

The autocannons give it more of a WW2 anti-aircraft gun look, and are probably what I’ll be using more often than not. I still couldn’t resist painting hot rod flames on the lascannons though. Next up in “dumb models I love but people get mad about” is more likely than not the Invader ATV. I’ve already got it in primed subassemblies and should start painting it by the time this gets posted. I also built up an Ogroid Myrmidon with the hopes of turning it into a Daemon Prince, but we’ll see where that goes. Until next time!

Having skipped the last two hobby roundups, you’d be forgiven for assuming I must have a veritable crapload of new hotness to show off. So what have I done in the last month and a half? One model. Just one. In my defence, it’s… not insubstantial.

This extremely subtle slab of explosmed architecture contains approximately one full tub of Nihilakh Oxide and, conservatively, all the skulls. I’ve been putting out a series of posts over at the Beard Bunker covering tips on building Sector Imperialis terrain, making the styrene base, adding rubble, and finally the painting itself. It’s been a while since I did any terrain, and I forgot how much I enjoy it.

Necromunda was on the table the past fortnight, which certainly had some highs and lows. First off I painted up the new Escher Death Maidens and Wyld Runners, which to be honest I really struggled with. I’m not sure if it’s due to them being a bit more spindly or my existing aqua and yellow paint scheme clashing with the undead nature of the Death Maidens.  I got there in the end with a result I’m ok with, but I’m glad I don’t need to paint any more 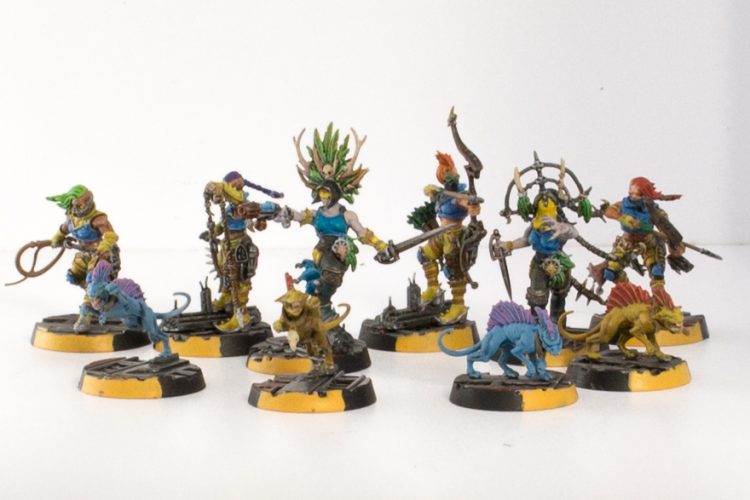 After this though I painted up an Ambot in classic G1 Devastator styles which I think I completely nailed and I’m super happy with. My backlog is running quite dry now, so next up I’m painting up some Infinity that’s been sitting in a box for the past few years. I’m interested to see how the go as they are even more spindly than the Eschers.

These dudes aren’t nearly as hyper detailed as the Bladeguard, so edging all of those gravis lines was almost like taking break! Speaking of Bladeguard, I kind of wanted to bring a larger unit for a tournament but I only had the 3 from the box set. I really want to paint the multiparts, so I figured the Bladeguard LT would be a great seat filler:

I wasn’t really planning on painting him anytime soon, so I am glad I had an excuse to knock him to the front of the queue. Like his veteran brothers, he has a lot of fun textures and excuses for freehand. Another model that got a surprise promotion to the head of the queue was my Primaris Apothecary:

I do no paint a lot of white armor, so I was a big nervous going into him. The white ended up just a little messier than I wanted, but he’s got enough other colors and details on him it’s not as noticeable as it was when he was just white.

We needed some zombies for Ghoulhammer’s How to Paint Everything Zombies article, so I also got my six from Blackstone Fortress finally painted up:

This was a one-day affair mostly with contrast paints, and I had a lot of fun with it. Up next I’m working on a trio of Invader ATVs, which I’m batch painting together as I’m some kind of madman.

With Halloween just gone I was in the mood for a spooky project, so I dug out my remaining Warcry warband, The Unmade. As is sometimes the way with my lack of hobby focus, these were built pretty much the week they released but then languished for a shamefully long time. Well they’re done now and I’m pretty happy with how they’ve come out. Skin is always something I find intimidating but really enjoy once I get in to it. I feel like this kit has great conversion potential as well, and I kind of already want another one.

I’ve painted a few things recently. The first of which being a werewolf for the excellent spooky article just before Halloween. In reality, he’s an Infinity Antipode. And a very good boy.

I also worked some more on some Infinity Nomads. First were some Alguaciles, basic infantry, as well as the tests for my basing scheme. They’re the three in the middle.

I also painted two big, stompy boys, both for Infinity Nomads. This fellow is a Mobile Brigada.

And this glorious lad is a Kriza Borac. Love this guy, and he’s got some real junk in the trunk here.

I focused this month on getting a bunch of terrain done. I’ve received a Terrain Crate from the Mantic Kickstarter and then I’ve had a ton of unpainted MDF and resin just sitting around. If I finish it now I won’t be tempted to just hock it for nothing at a local con once Coronavirus goes away. 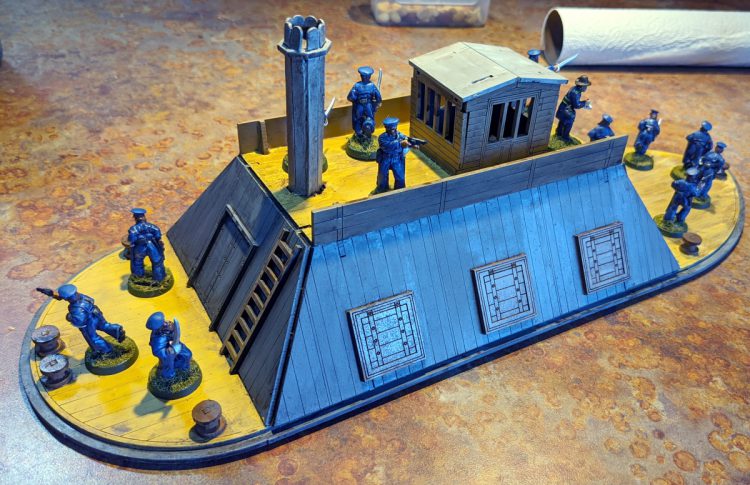 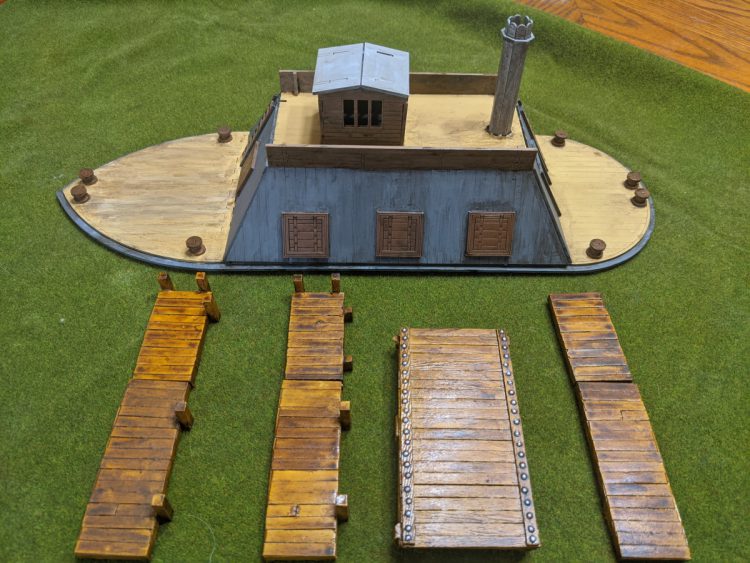 First I wanted to finish this MDF Ironclad from Sarissa. I’d like to use this for ACW games where I’m doing raid scenarios in the North Carolina / South Carolina region. The ironclad won’t really have rules, it’ll mostly be a static terrain piece, but it’ll definitely add to the game. You can see the sailors I’ve painted before crewing it in the first pic. It’s not exactly to scale but it’ll work nicely. The second pic shows some piers that I finished as well. I can use these for a variety of games ranging from Blood and Plunder to WW2. 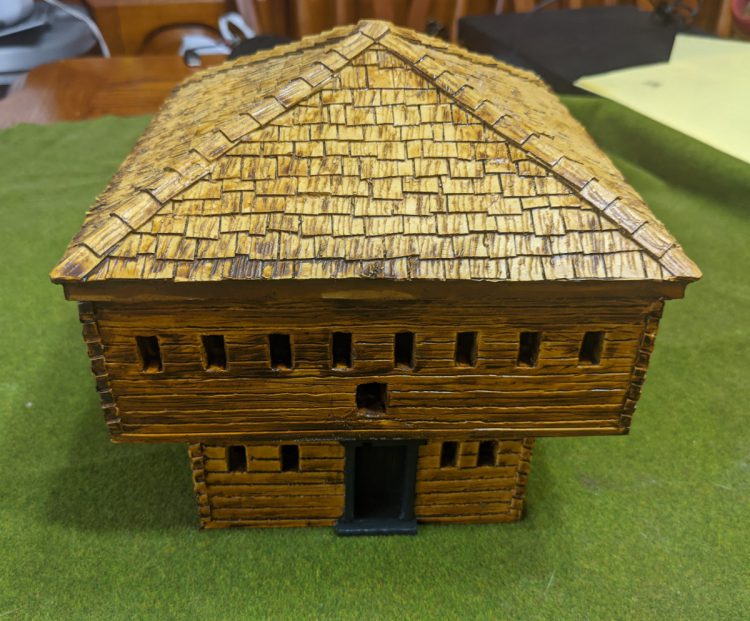 This blockhouse is from Sash and Saber, released for their recent FIW line. I used contrast paints on it almost exclusively just to get it knocked out. It’ll be good for FIW but also ACW – Union forces built a ton of blockhouses to hold local areas and keep guerillas at bay. 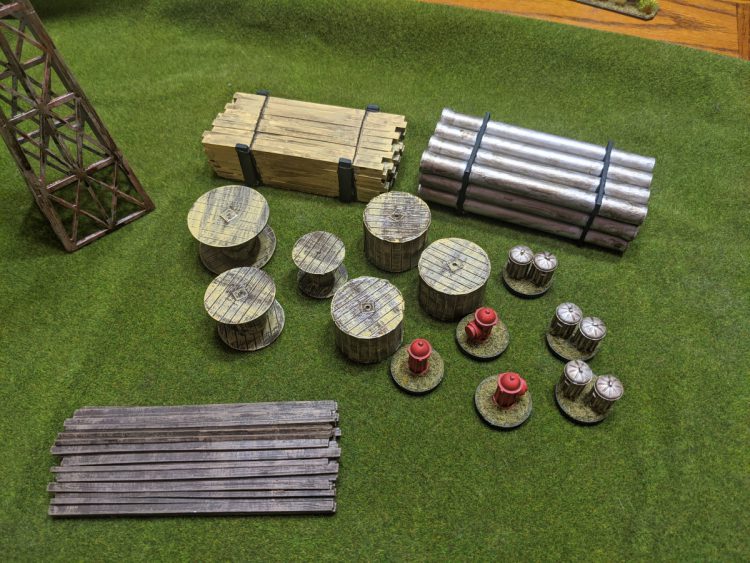 Here’s some scatter terrain, mostly from Warlord Games. I bought a whole warehouse / construction set from them and it’s all in resin and looks great. I mostly just did washes and drybrushes on these to bring out details. The radio tower will work nicely for WW2 or Walking Dead scenarios as an objective. 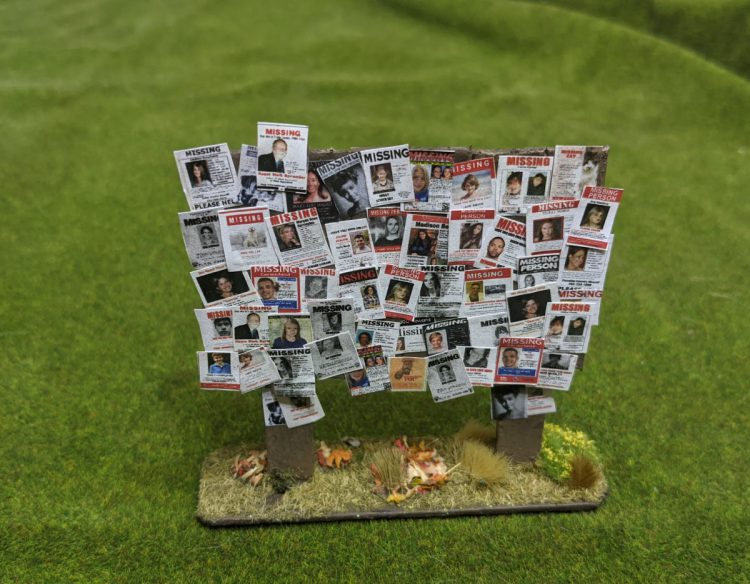 I got the idea for this piece from a panel in issue 175 of The Walking Dead. Michonne and her group find this board and on it is a missing poster for a key character. I just made a sign out of popsicle sticks then printed off these missing posters and glued them on. It’ll be a nice flavor piece but also a good piece of cover in The Walking Dead. 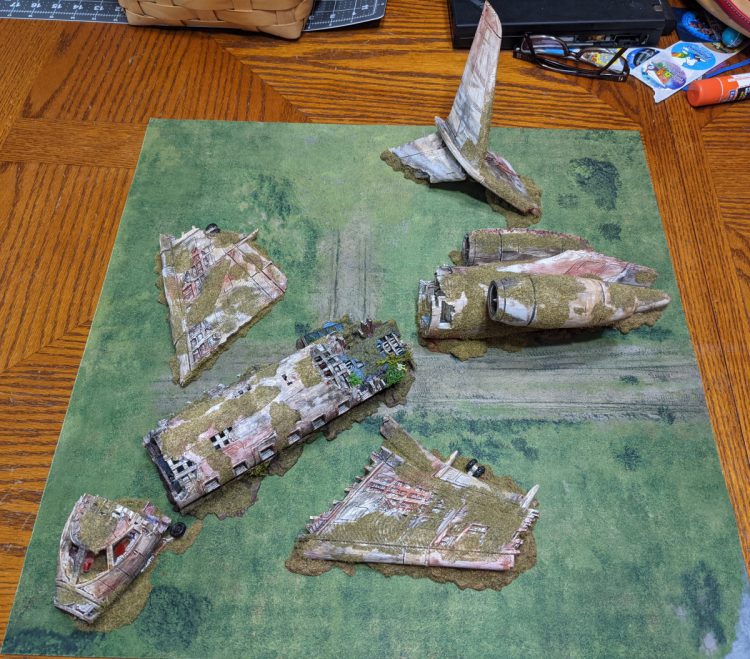 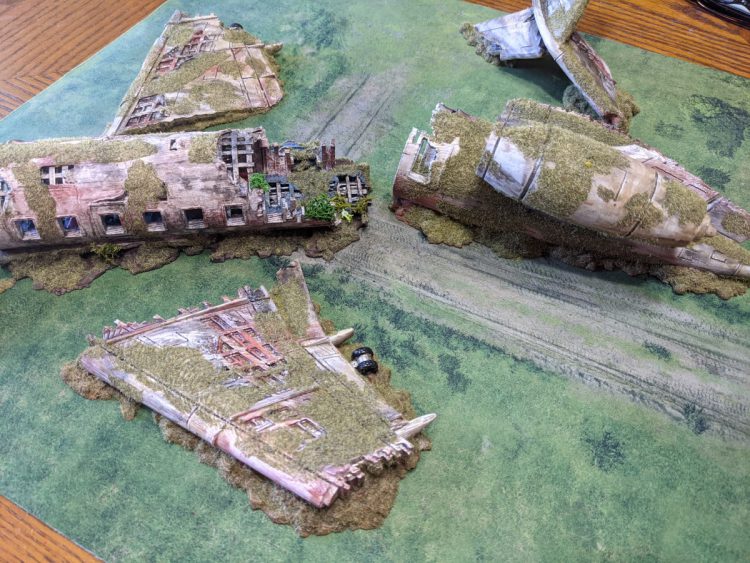 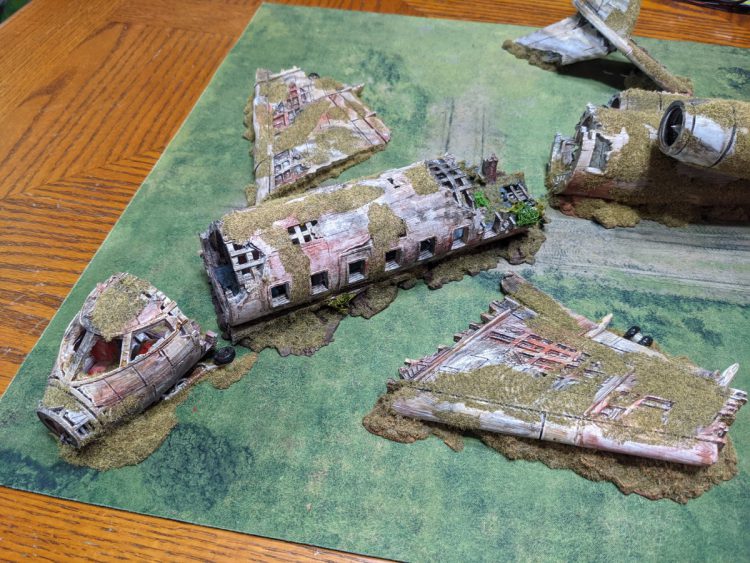 This is one of the more ambitious pieces of terrain I’ve ever painted. It is all 3D printed by my friend, the original file bought from Printable Scenery. I wanted to weather it and make it look overgrown like it’s been crashed for years so I can use it in The Walking Dead, Zona Alfa, etc. I’m really happy with how it came out. The print quality was pretty good – I used flock to cover some of the obvious print lines, but fillable primer and weathering helped hide the rest. 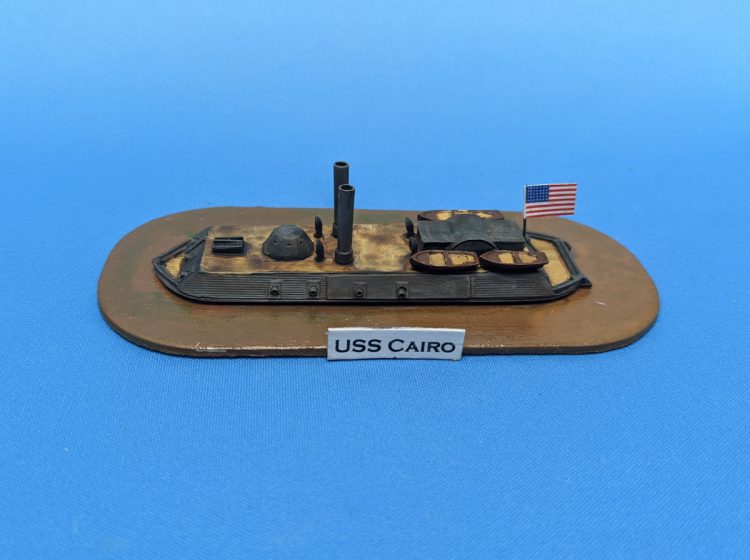 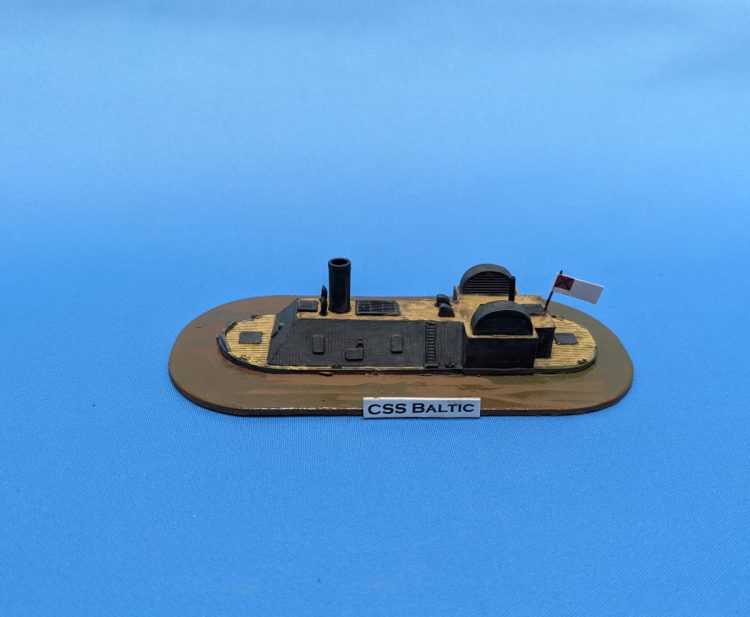 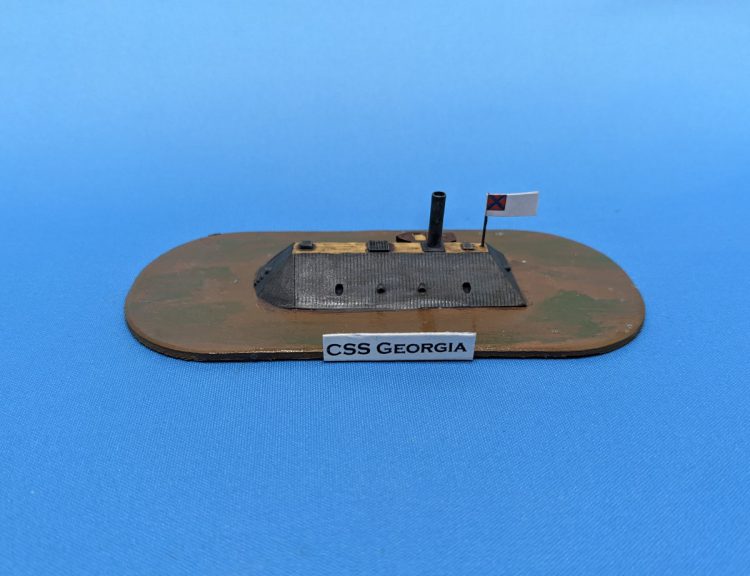 Last I have some ironclads I finished in 1/600 scale from Thoroughbred Miniatures. These are gorgeous models – I think I’ll probably own the whole line at some point. I mostly just picked ones I liked the look of, not going for a certain scenario. The CSS Georgia was actually so poorly manufactured that it couldn’t move and ended up being a floating battery. I’m still looking at rules but right now I’m leaning toward Ironclads by Scary Biscuit Studios.