Gunum Presents: In the shadow of greatness, an interview with Nick Weiss- The Two Rivers GT Champion. 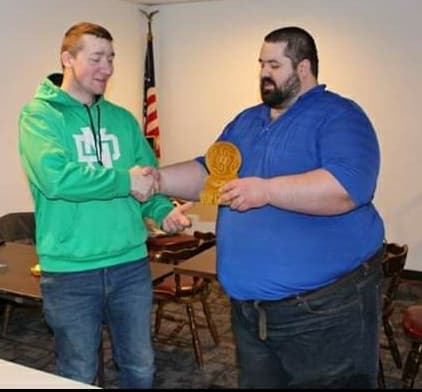 Nick Weiss with the founder of the Two Rivers event, Sean Lengenfelder

Hello everyone, Chase “Gunum” Garber here and I am bringing to you an interview with the winner of The Two Rivers GT, Nick Weiss! Nick is a star teammate of mine, a man who I have had many very, very tough games against and who has only been playing competitively for 2 years. He won the very first Major he went to and man, is he one smart hog. We previously covered the Two Rivers Open GT event in detail here.

The Two-Rivers ITC group is a non-profit company running tabletop gaming tournaments in the upper Midwest with plans to support local charities with GTs in the future. Sean has been a leading force with this group, showing a noticeable love and investment in his events. He works very closely with local game stores, covering a huge area of the state of North Dakota.

As I’ve mentioned before, my team, the Warhogs have a strong presence in the Midwest and this event was right in our back yard – Fargo, North Dakota. As a result, our team dominated the standings, including the event’s eventual winner – Nick “The Kid” Weiss. Also in attendance were some other big names you might recognize, such as James “Boon” Kellling and Ben Cherwin, who have been talking about The Lord Marshal Conference. Fellow Goonhammer writer Cyle “Naramyth” Thompson was also there, as well as ITC heavy hitter Tyler DeVries. So the field at the event was full of tough lists, tough players, and non-nerfered Space Marines (Editor’s Note: The Fargo Two Rivers Open GT used pre-FAQ rules for Space Marines).

Despite the use of pre-nerf rules, the top 10 finishers were: 2 Imperium, 1 Iron Hands, 1 Aeldari, 1 Space Wolves, 1 Harlequins,1 Grey Knights, 1 Chaos Space Marines, 1 Imperial Knights, and 1 T’au Empire list. Now that’s is the kind of Meta I want to see! Diversity in the top 10? Let’s go.

Okay, okay. Enough with the filler. Let’s get into that juicy back bacon! The Man of the Hour, the Imperial Visionary, the Rising Star, the current Top Hog: Nick Weiss.

Chase: Okay Nick, let’s get right into it. Who are you, how long have you been playing, and how would you describe your play style for 40k?

Hey there, I’m glad to be here chatting with you Chase, it’s always a blast. I’ve been playing Warhammer since 7th edition fantasy and 5th edition 40k. My play style is a mix of things I normally try to play with a “hammer-and-anvil” setup. With this set-up I try to focus on board control with some hard-hitting units mixed in there. When I got into competitive 40k I started off with Knights when they first came out then moved to Tau, Marines and now Imperium.

Talking about the event, what kind of preparation do you normally do to get ready for a GT like this?

I’m not the best at prepping for a GT; I normally try to get a few games in once I decide what I’m playing but I always lock in [at] the last minute. For this tournament, none of the Sisters or Scions were ready when I decided to play this list, so a lot of painting happened before the event. The week leading up to the event I got three games in with Chase’s Harlequins to familiarize myself with the list and rules again.

I definitely focus on how a list plays over missions though I do take them into account. When I start building a list I always find a reason for every unit that I put on the list. For this list, the two 10-model sister squads were for Engineers while the other three were for board presence. One big question that my dad and I have been working on was how to kill pre-nerfed marines. We built the scion part of this list to kill marines. After the initial list was built I revamped it to better fit the ITC missions, took out some scions, and added the Grey knights for denies and close combat.

What in this list do you feel was your standout unit? Were there things that underperformed?

I feel like the ten-man scion squads were my best unit throughout the event. They’re hard to kill, with the relic giving them a 5+++ and you need to kill seven guys to get rid of a plasma gun. When they dropped in they were able to re-roll one to-hit and once to-wound roll versus infantry. They performed very well every game and were my go-to unit to kill vehicles. My most under-performing units were the command squads. Every model lost was a special weapon; this made them an easy target compared to the slightly more expensive ten-man squads.

In what round on the first day did you feel the most pressure?

I felt the most pressure on the third game of day one versus Tyler. His knights and tank commands put a lot of fire downfield and weren’t afraid of close combat. Tyler’s list was able to put a lot of firepower downfield while putting pressure on from the knight at midfield. The tank command were really good and Tyler forced my hand and made me commit all the scions on my side of the board to protect my objectives. The scions were the reason I won that game since they were able to re-roll wounds versus vehicles.

Okay! Day 2. It’s the finals. I, in my normal excellence, had gone 3-0 the first day as well and had just lost to fellow Goonhammer author James “Boon” Kelling. You had just done very well against your own round 4 opponent and were about to step up to the other heavy hitter at the event. When you know you are going into a tough game, do you do any pre-planning or do you tend to make those decisions when you pull up to the table and are able to ask questions about your opponent’s army?

Well, Chase it really depends. If there’s a large break between games I’ll try to read and understand my opponent’s list, but most of the hard decisions happen as I walk up to the table and during deployment. I usually try to have my secondaries picked before I walk up to the table, but that didn’t happen in that game.

Tell us about the game! Let’s get into the meat. You’ve played on stream before and this event didn’t have that at the top table. Do you think that adds or takes away from a top table experience?

I think it adds to the experience but it does raise the level of stress associated with the game. I’m always more on edge while on stream, for no other reason than everyone can and will second guess what you do.

The game was fantastic, one of the best that I have played in a very long time. With the list being a blend of three armies I was able to use each army for a specific purpose. The Sisters were the board presence that was hard to kill and scored points. The Grey Knights were a counter punch and gave me a great psychic defense. The Scions were the hammer – they came down on turns 2 and 3 and were able to kill things. With the Sisters and Grey Knights on the board, I felt comfortable leaving the 700 or so points off the table and knew I wasn’t going to get boarded.

Due to playing a slightly unconventional Imperium army, were you able to use the unique things that each faction brought to your list in a surprising manner?

I felt like I was playing from behind the whole game, I was able to get board presence but he had every advantage in a ranged battle. The Grey Knights were huge in this game, they let me contest the physic phase and with them, in the middle of the table, I was able to keep the shining spears back. [Boon’s] shooting was impressive he was killing a lot of sisters every turn and there was nothing I could do about it. His list was really fast and made hiding not an option so I went aggressive and started to push him back so I could score the bonuses and get all more secondaries. Round 2 when the Scions came in and picked up three weapons platforms, a tank, and some spears was a good turn in my favor. The Scions with the 5+++ are not that easy to kill and it took him 3 turns to get rid of them.

With that, it’s all over. Even with victory in your rear view mirror, was there anything you would have done differently? Anything in your list you’ll be changing?

The two command squads are out of the list. They were the first targets every time because if you kill a guy it’s a plasma or melta guy, not a rifleman. I will another ten-man squad of scions.

Now that you’re the Champion of another GT, What’s next? Are you going to start a podcast? How about write into GW and try and get on their community team with your meta breaking Imperium lists? What can I do to be as cool and good as you are?

Well Chase for this last one, it’s a tough call. I would like to say you should play imperium also but I know you won’t do that so you should hop on the bug boat (Tyranids – Ed.) and see what they can do.

The End of a Journey

That’s it, people. Thanks for swinging by and taking the time to read the thoughts of a top-tier player being asked questions by a Dark Angels player. As always, if you have any comments, questions, or concerns, or if you just want to reach out and talk to us about how awesome weird Imperium soup can be, drop us a note in the comments below or email us at contact@goonhammer.com.