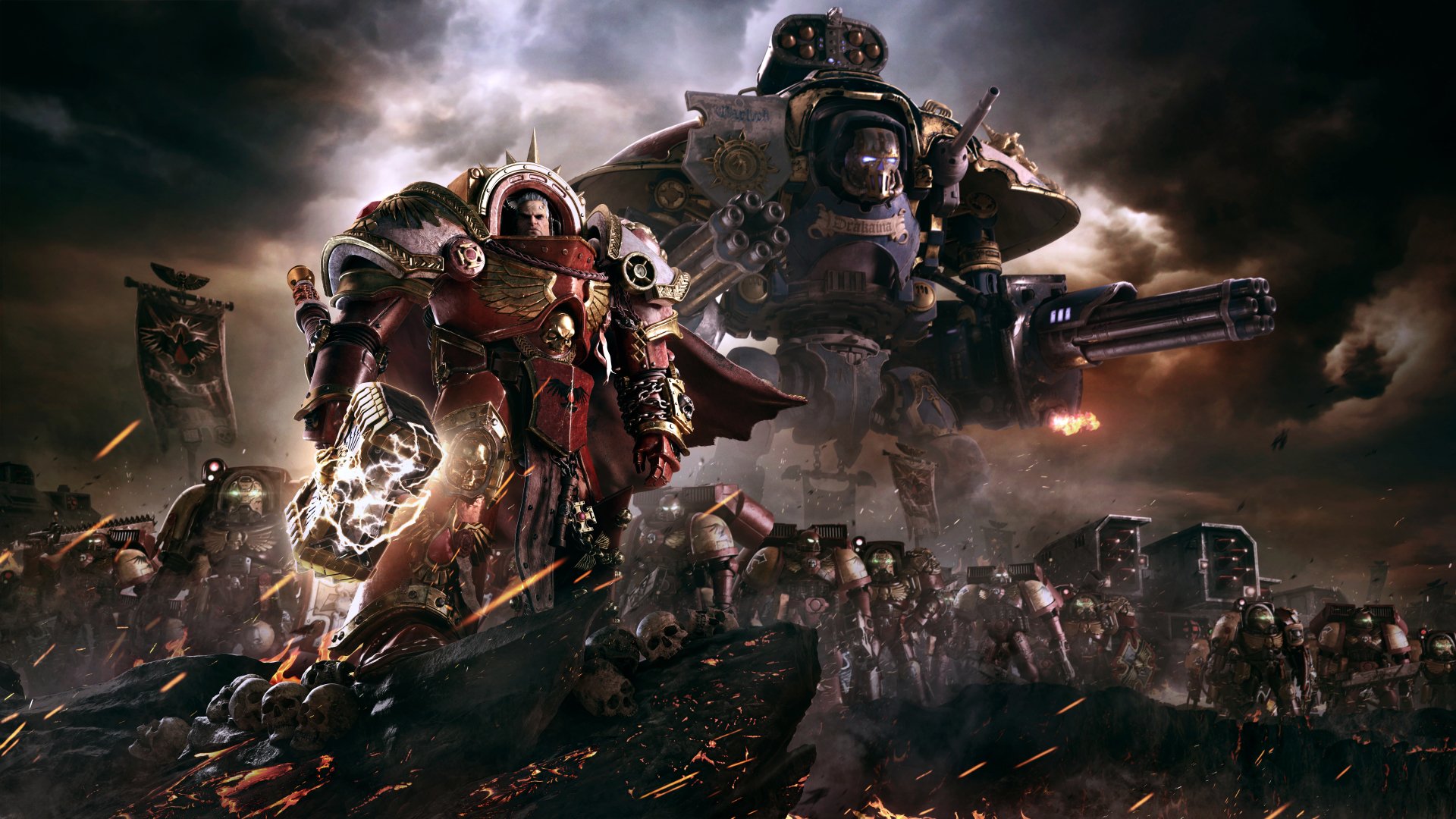 Depending on who you ask, Games Workshop has either been crushing it this year with their White Dwarf rules releases or they’re making players’ lives miserable by piling on additional rules through hard-to-get issues of their monthly magazine. I tend to fall more into the former camp than the latter (I am for anything that gets us rules updates faster than twice yearly FAQs and Chapter Approved), but I understand the frustration many players have over suddenly needing to own yet another book or magazine to stay current on the game’s rules.

Since their introduction in THQ’s Warhammer 40,000: Dawn of War, the Blood Ravens have risen from being a throwaway Chapter mentioned once in an offhand bit of fluff to one of the game’s most well-known later-founding chapters of Space Marines. While Games Workshop might not have initially thought much about the Chapter, players grew to love them over the course of Dawn of War I and II (less so the third game in the franchise), and as a result, we’ve gotten rules for the Blood Ravens several times since their first video game appearance. July’s White Dwarf gives us the latest iteration of the Blood Ravens rules, along with a new Chapter trait, relic, stratagem, and rules for the Blood Ravens Chapter Master, Gabriel Angelos.

But are the Blood Ravens any good? Are they worth your time if you aren’t already sitting on a pile of Marines in dark red armor with bone-colored shoulders? Join us as we dig into the new rules and find out.

The Blood Ravens’ Chapter Tactic is called Relentless Seekers, and it has two effects:

This is really solid. It immediately makes your more elite, T4 Marine units immune to the extra strength of heavy weapons, or the added strength bonus of supercharged plasma, and it’s always on. The Psychic half of the tactic is also strong enough to be more than an afterthought, helping avoid perils and improving your chances of getting off a power by about 12%, depending on the target roll (it’ll increase your chances of scoring a 5+ for Veil of Time to about 94% and improve your chances of landing the 6+ for Scryer’s Gaze to about 85%).

The Blood Ravens Stratagem is Chief Librarian, which you can spend 1 CP on before the battle to upgrade a single Librarian to Chief Librarian, letting them know one more power from their chosen discipline and attempt to Deny an additional psychic power each turn. This stratagem would be a lot more useful if the standard Marine powers weren’t so bad; as it is, you often won’t even want access to a third power. As-is, the real value is in having the second Deny opportunity for a single unit, which combos well with the Chapter trait’s re-rolling 1s and the +1 to Deny attempts Librarians receive from their psychic hoods. We’ll talk more about how to put that into play later.

Fluff-wise, it’s a cool nod to the notion that the Blood Ravens may be descended from a splinter faction of the Thousand Sons, though.

The Relic is a special pistol called the Purgatorus, which replaces a bolt pistol or heavy bolt pistol and has 2 shots at 12″ range with S5 AP-3 D2. It’s neat, but someone should tell the rules writers that there isn’t currently a character Marines can take who has a heavy bolt pistol.

Finally, Blood Ravens Chapter Master Gabriel Angelos gets an overhaul of his Forgeworld Datasheet (though it’s too bad he couldn’t get a new model as well), which ups his BS to 2+ and gives him an extra Attack, plus it replaces his hammer’s Arcing Swing (1 hit on every enemy model within 1″) with the more useful Sweeping Blows, which just gives him +3 Attacks if he uses the hammer in that mode. They’ve also replaced his Retribution ability (which did D3 mortal wounds to the model that killed him) with the more thematic Leap Into the Fray, which represents his habit of jumping into combat with his Thunder Hammer and sending everyone flying. The new ability lets you pick a unit within 1″ that you charged with Angelos this turn and roll a D6; on a 4+, they take D3 mortal wounds.

The other big change to Gabriel Angelos is his re-roll aura, which gives the ability to re-roll hits (instead of failed hits), and sidesteps the issue of modifiers’ interaction with re-rolls. This is something we’ve seen a lot of recently, including in the new Chaos Knights Codex, and it’s a welcome change.

Angelos is… OK. Points-wise, he costs about the same as other Chapter Masters, and his re-roll ability is better (at least, until we get the probably Space Marine Codex 2.0 and everyone’s gets an update). His God-Splitter hammer gives him some real punch in close combat and puts him ahead of the new Marneus Calgar in terms of combat output. On the downside, he’s not nearly as survivable as Calgar and although Teleport Strike helps him get into combat, he doesn’t have the powerful delivery options of a model like Dante.

The Blood Ravens’ Chapter Tactic is interesting in that it doesn’t do you much good if you’re going up against something that would wound you on a 3+ (or worse) anyways. So the ideal units for making use of the Tactic are elite, multi-wound models who still have Toughness 4, making them otherwise really good targets for things like supercharged plasma weapons.

For Marines, the units who currently fit this description are:

singing One of these things is not like the oooo-thers!

It’s no coincidence that Primaris marines benefit the most from this Chapter Tactic, and the biggest beneficiaries are likely to be Intercessors and Hellblasters, the former of which fill up Troop slots and the latter of which are incredibly useful and need the added survivability. The big benefit here is not getting instantly taken out by a passing Hemlock, or being trivially blown to bits by current meta nasty the Caladius Grav Tank. Eliminators also get a big boost – thanks to their additional boost to their save in cover pointing high-strength, high-AP weapons at them is really the only reliable way to shift them, and the trait makes this much ahrder to do.

The rule also potentially benefits Terminators greatly, where the T4 combined with 2W and a 2+ save means they’re the ideal targets for the kinds of weapons that are likely to Wound T4 on a 2+ (Primaris marines will have to worry much more about guns with S5+ and AP-1 or AP-2). Sadly, Terminators are still really bad for their points cost and this alone probably isn’t enough to overcome that.

With regard to the psychic power boost, we can make a case for running detachments with three jump pack Librarians. These guys fall perfectly into the intersection between “Elite multiwound units with 4 Toughness” and “psykers” and while the Librarius Discipline isn’t much to write home about, they can put out an impressive number of mortal wounds popping out three Smites per turn with re-rolls. They can also really hamper your opponent’s powers-heavy gameplan with their buffed ability to Deny 3 to 4 powers per turn, depending on whether you upgrade one to be a Chief Librarian.

Because protection from S8+ as a passive ability is something we’re going to want most of the game and on Primaris bodies, Blood Ravens also make great candidates for the “Indomitus Crusaders” specialist detachment. Using the Grey Shield trait allows them to gain access to the Raven Guard trait to get -1 to be hit from more than 12″ away (or, depending on the situation, you might opt for the Ultramarines or Imperial Fists tactics), making them incredibly durable against both heavy and small arms fire for a battle round.

I’ve tried to play up to the Blood Ravens’ strengths as best as possible, creating an army that will both shrug off the benefits of S8+ shooting and also be able to take advantage of the benefit to Librarians’ Deny and Power attempts. I’ve tried to build a list that maxes out on Primaris bodies while using the strategies that are most likely to benefit those units. We’ll turn our Battalion into an Indomitus Crusaders Detachment so we have access to the Grey Shield trait, and we take a 10-man blob of Intercessors with a Power Fist to turn into Veterans at the start of the game. Likewise, we have a 10-man Hellblaster squad on hand to reap the benefits of any re-rolls and the Primaris Ancient’s standard ability. The core strategy will likely see Angelos walking up the field with the Veterans.

Eliminators are a strong replacement for Scouts and so we can fit an additional Spearhead into the list as a way to make room for the Librarians and score an additional Command Point. I really, really wanted to include a third Librarian in Phobos Armour here to support the Suppressors and Eliminators, but ultimately couldn’t fit it into the list. Our heavy firepower comes from the Suppressors, Hellblasters, Executioner, and the Mortis Contemptor, who can help take down big targets or hordes, which the Jump Pack Librarians can help with in a pinch via Mortal Wounds.

The Blood Ravens are in a good place; their tactic is versatile and strong enough to help shore up a weakness of Marines’ infantry units. It’s not overpowered, but it’s strong enough to be on the level of the better Space Marine Chapter Tactics. That said, it also doesn’t really tie in with the stronger Marine builds in the game right now, so unless you’re building large foot blobs you’re gonna struggle to get value out of it.

Also it’s worth noting that writing this made me re-watch SRM’s “Dawn of Awesome” video a dozen more times. That stupid video still holds up.