Kill Team: Nachmund releases this weekend and if you missed our reviews of the boxed set or either of the two new kill teams – the corsair voidscarred or the traitor legionnaires – you can find them by click on those links. But as with prior releases, there’s more to the box than just the terrain, models, and competitive play rules. And as always, we’re diving into the narrative rules of the box in today’s Narrative Forge. So if you were curious about how the new rules are for campaigns, look no further – we’ve got you covered.

Before we begin, we’d like to thank Games Workshop for providing us with a preview copy of the Kill Team: Nachmund boxed set for review purposes.

The KT Nachmund box comes packed with a bunch of Sector Mechanicus Terrain and as with the Octarius and Chalnath boxes, we get traits for each piece of terrain. What’s new here for Nachmund in particular however is that there are a number of new rules for each terrain feature that can make for more narrative play experiences. In all there are nine new terrain features:

Terrain rules are always a mixed bag in games. Make them too simple and the terrain doesn’t really matter. Make them too complex and players just forget about them. In that sense, these features are about right from a complexity standpoint, though the actual effects aren’t particularly exciting. I’d have preferred to see something connecting hatches rather than just making them XP sources, and given there are broken sections of Thermic pipes doing a mechanic for blowing them up in narrative games would have been cool. But as-is, these are fine and they find ways to make better use of the terrain rules in the Nachmund missions – more on that below.

As with other releases, the new book gives us Spec Ops rules for both of the box’s kill teams, with battle honours, rare equipment, assets, requisitions, and Spec Ops for each.

If you read our review of the Voidscarred you know they come from all walks of Aeldari life and they’re fast as hell. They’re all about plunder, and their two Spec Ops reflect this. Path of the Reaver is all about becoming a great champion among pirates, making a name for your Felarch. This Spec Op has you Robbing/stealing things in Operation 1 and then protecting them to stay on top in Operation 2, giving you extra equipment and archaeotech for a successful completion. Aggressive Raid on the other hand is about making a lightning strike and then fighting your way out in the aftermath. Succeed and you get more assets, XP, and Requisition.

When it comes to Requisitions, Corsair teams are great at picking up Rare Equipment via The Bounty (1 RP), which lets them add one after any game where they scored 2 VP from the Opportunists or Retrieval Tac Ops. If you lose an operative, you can transfer some of their XP to a new operative by talking to their soul stone via the Soul Memories Requisition. And if you want one of your operatives to act like an old-school KT19 Leader, you can use the Corsair Hero Requisition to have them generate 1 CP extra for you every turn while they’re on the table.

The Corsair Battle Honours are fine, though none are particularly exciting. Expert Marksman gives models the ability to perform the Take Aim action for free, while Important Fate lets an operative downgrade one crit against them per attack/combat into a regular hit.

There are six pieces of Rare Equipment for Corsair teams and to be honest I’m disappointed there aren’t more for what is a group of pirates and raiders. There are some cool callbacks to other Aeldari factions here – you can get Flip Belts for your team to have them Fly around the battlefield, arm your Soul Weaver with a Spirit Stone to get extra Soul Channel Activations, and add a Witch Staff to your Way Seeker to let them re-roll their Psychic Power tests.

There are three Strategic Assets up for grabs here – Hoard of Spoils gives you an extra CP per game, a Webway Entrance gives you a free Recon action per game, and Aerial Support gives you a nasty shooting attack from a Nightfire Missile that can drop in with a large blast range.

All of this gives you some decent options for customizing your team. Though if I’m honest, only having six pieces of rare equipment for Corsairs seems like a miss. A group of raiders and plunderers should have many more options – at least give me 9 options and a D33 roll. There are lots of ways to get extra equipment and relics for Corsairs in a Spec Ops campaign, which is cool, but not enough to actually get. It makes me wish that we had more generic campaign supplements to play with that had lots of rare equipment and battle honours.

Chaos Space Marine kill teams give you a ton of customization within the matched play rules, with tons of weapon and loadout options, psychic powers, marks of chaos, and a ton of ploys and equipment. They’re a versatile force, and their Spec Ops rules reflect their dark purposes. Send a Message has your team hunting down and killing enemy leaders and sowing fear and chaos in the enemy ranks (killing an enemy Leader operative is part of the process). Complete this one and you get extra AP and Requisition plus another Asset. The other option is Tainted Journey, which sees your team showing terror and desecrating the enemy’s holy places and shrines. Plant your banners and Seize some Ground and you get more rare equipment, some extra RP, and the ability to and another asset.

If you want to use said assets to deck out your Heretical crib, you’ve got a few options. The Unclean Shrine gives your operatives extra XP for killing the most enemy operatives, Relics of the Heresy gives you two extra rare equipment items, and adding a Sacrificial Altar gives you a once-per-battle ability to ignore the damage on one of your guys from an attack die.

Once you move past updating your crib, you can deck out your legionnaires. We get the usual six pieces of Rare Equipment. Pages of Sacribus give you the ability to manifest two powers per activation, and are going to be one of your top picks, while the Icon of Chaos prevents your operatives from being Injured. Brands of the Damned is a really clever one that lets your operative use a Tactical Ploy once per battle for free. Which Ploy you get depends on what the operative’s mark of chaos is – you get the one corresponding to that mark.

The Requisitions here let you mark operatives for Greatness, letting you convert regular hits as crits for as long as that operative isn’t outshone by another operative on the team. Eye of the Gods rewards an operative for taking out an enemy leader, healing their scars and giving them D3 extra XP. And Cast Aside lets your operative lose their mark of chaos ability for D3 battles instead of taking on a battle scar, showing how the gods have turned their gaze away for a time.

If it sounds like the Chaos team is more fleshed-out and interesting than the Corsairs team well, it is. They have more going on from a customization standpoint and more going on as a result end up having more going on in their Spec Ops rules, because some of their options interact in more interesting ways with the rules your team can have. Its’ great stuff, and makes me excited to build a Legionary Team in a Spec Ops campaign. 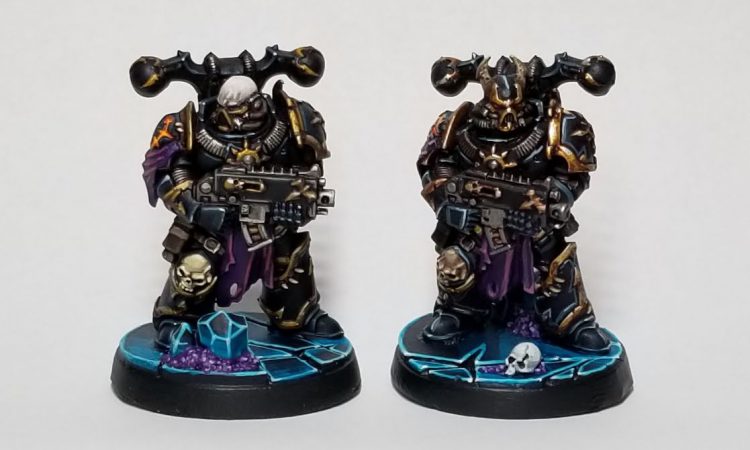 There are nine missions here spread across three tables (it’s just a D33 roll, really). And there are some cool missions here. Note that these are heavily designed around having the Nachmund box terrain, so you’ll want to make sure you have the terrain – or a reasonable facsimile of it – when you play them.

Steal the Ciphers has the attacker attempting to close vents to overwhelm a security grid then explore underground through the hatches placed on the battlefield. Succeed and you can access the defenders’ communications and hack their security networks. The Blow the Reactor mission makes clever use of the smog stack features – The attacker’s job is to open these early and quickly to cause the reactor to overheat, destroying the defender’s key power source. It’s a clever way to make the map’s objectives less abstract. Cripple Their Infrastructure takes a similar tack, with the Attacker’s operatives planting explosive charges around the map for the Defender to defuse.

There are some good missions here, with some clever hooks. For many of them I think the boxed set terrain is an OK start but not really ideal, and I’d suggest upping the stakes and adding more terrain to the table if you’ve got it.

The Spec Ops rules for Kill Team Nachmund give us some solid new options that expand on teams in interesting ways. The Legionary Teams definitely get the better set of options here, but both sets are pretty solid. I’m excited to start building a team and I legitimately suspect that players will jump to proxy marine teams as Legionnaires. Less certain for Eldar, but I think that generally speaking if you wanted to just do a warlock as your Way Seeker and an Exarch as your Felarch etc. it’d be just fine. If you were on the fence about how these rules would look for Spec Ops, I think there’s some fun stuff here that makes it worth considering either team in a campaign.