Ruleshammer: When You Check (and Re-Check) Line of Sight and Distance During Ranged Attacks

This is an 8th Edition Article! For 9th Edition Ruleshammer look here.

Although we love Warhammer 40,000, the game’s complexity can be daunting, particularly for newer players. In Ruleshammer, we look at the nuances of the game’s rules and how they affect gameplay, clearing up potential issues and helping make sense of some of the game’s less common interactions. In today’s Ruleshammer, Rob “Vre’kais” Chilton is looking at when line of sight and ranges are checked for ranged attacks.

The Shooting Phase is broken up into 4 actions you complete for each firing unit:

That last step takes up an entire page, where the first 3 steps take up a single page all together. I think this gives you some indication of the time you’ll spend in each step. I’ve mentioned this before, but you don’t have to check distance and Line of Sight for each ranged attack, so once you start shooting, you can’t “shoot yourself out of range” of a target enemy unit.

So why don’t we have to check Range and LoS for each attack?

It’s because of steps 2 and 3; I’ve quoted the relevant sections below.

Having chosen a shooting unit, you must pick the target unit, or units, for the attacks. In order to target an enemy unit, a model from that unit must be within the Range of the weapon being used (as listed on its profile) and be visible to the shooting model. If unsure, stoop down and get a look from behind the shooting model to see if any part of the target is visible… [Core Rules 40k Pg5]

…If a model has several weapons, it can shoot all of them at the same target, or it can shoot each at a different enemy unit. Similarly, if a unit contains more than one model, they can shoot at the same, or different targets as you choose. In either case, at the same time that you choose targets for the shooting unit’s attacks, you must declare how you will split the shooting unit’s shots; then resolve all the shots against one target before moving on to the next. [Last Sentence of this rule was changed: [Core Rules FAQ Pg1]

So you check for Range and LoS for every model in the unit when you choose its targets. Range and LoS are not checked again before the Unit has finished shooting. You declare and measure all this in steps 2 and 3. You then resolve each of the unit’s model’s attacks in step 4.

When does this come up?

There are a few places this comes up regularly:

Q: If one of my units shoots an enemy unit in which only one model is visible, and I resolve the attacks one at a time, slaying that model before I have resolved all of my unit’s attacks, what happens to the rest of the attacks – are they wasted?
A: No. You determine the number of attacks the firing unit will make against the target unit before any of those attacks are made (i.e. before any hit rolls are made). If you are resolving these attacks one at a time and your opponent removes the only visible model as a casualty, you still continue to resolve the remainder of the firing unit’s attacks against that target. [Core Rules FAQ Pg8]

Generally I think the rules are worded this way to prevent slow rolling being necessary the majority of the time, not that slow rolling isn’t sometimes required…

What Things Are Checked “Mid-Shooting?”

You can gain the benefit of cover if you remove the models not in cover first.

Note, however, that it is possible for a unit to gain the benefit of cover as it suffers casualties during the Shooting phase by removing those models that are not on, or within terrain. As soon as the last model that was not on or within terrain is slain, the rest of the unit immediately starts to receive the benefit of cover. [Core Rules FAQ Pg4]

This FAQ has been controversial since its inclusion and does require some slow rolling of saves to account for this effect.

Being in Range to Aura abilities

This isn’t a very common occurrence but there are situations where you might need to slow roll for a particular model to check it doesn’t die from its own attacks (e.g. from overheating plasma weapons) before rolling for the remainder of the unit. Here’s an example of the type of rule I’m referring to:

Rites of Battle: Re-roll hit rolls of 1 for attacks made by models in friendly <CHAPTER> units whilst their unit is within 6″ of this model. [Codex: Space Marines, Pg. 112]

This check happens each time a model makes an attack, much like how enemy units constantly check if they are within cover. 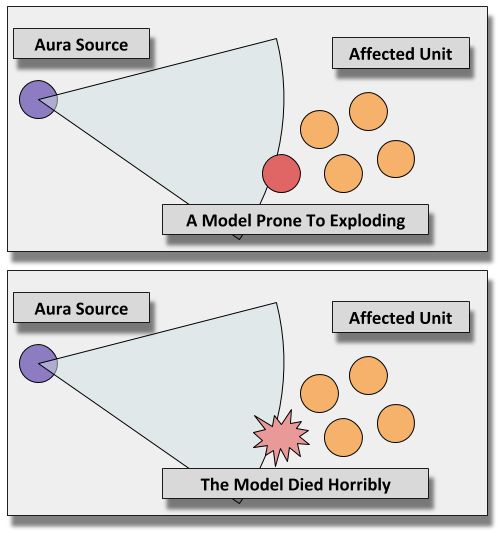