The Games Workshop US Open series just concluded its Chicago event this past weekend, and among the events there was a Kill Team GT. We’ve got TheArmorofContempt’s writeup on how his Wyrmblade fared in that event coming next week, but today we’re joined by a special guest – Travis Cheng, the event champion.

Hello everyone, my name is Travis, and I got my start in Warhammer in 2006, with 4th edition Tau. Even back then I was mostly interested in Kill Team and have fond memories of looking at the chef in white dwarf articles on 4chan. I left the game around then as well due to a lack of local players, and came back in for Kill Team 2018. I started a group, but most of us felt the game was a bit stodgy and slow paced. Come around to Kill Team 2021, and the game was revitalized with solid game play. I hit the ground running for the Kill Team event at the GW Open Chicago 2022 by forming a practice group – the Brooklyn Rats – and ended up winning the whole thing!

I’ve been running narrative and competitive Kill Team events since release at my FLGS, the Brooklyn Strategist. We’re currently on our third Kill Team narrative event, and hosting a true New York GT (but more on that later). 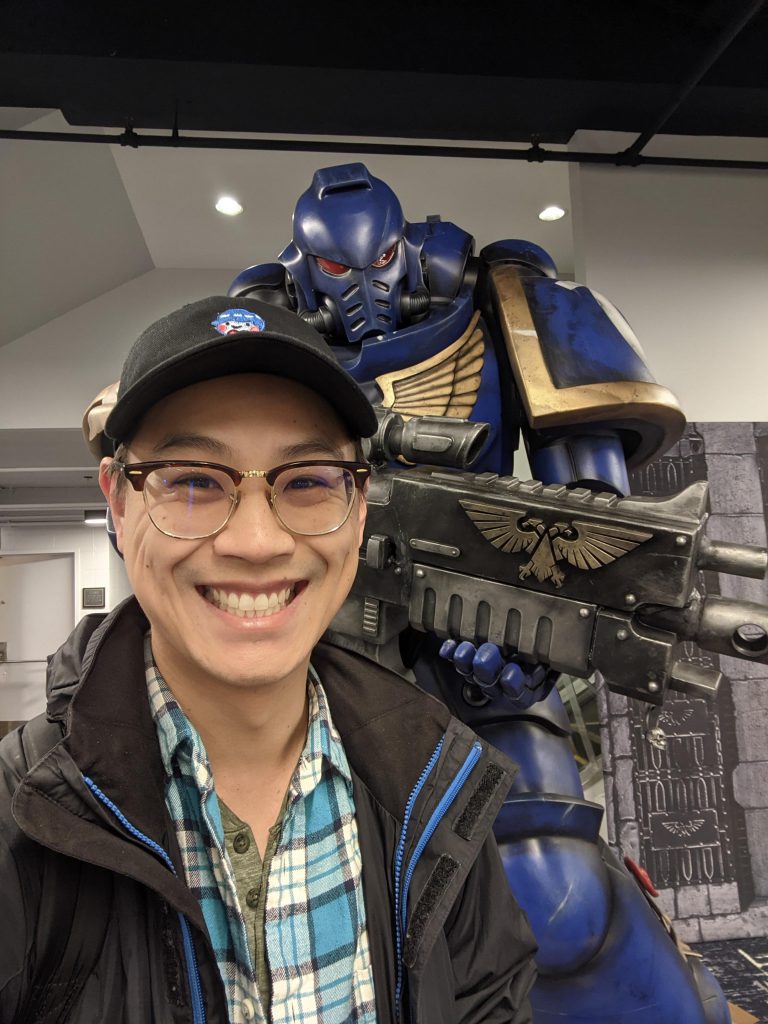 I made my team choice after Games Workshop announced that the Chicago GT would have 3 open and 2 Into the Dark/Gallowdark boards. I was mostly torn between my trusty Pathfinders and newer (and improved) Hunter Clade. While Pathfinders might be the best team on open terrain, they do run into issues on some of the tight corridors found in the Gallowdark. There are some missions with good firing lanes, but some will be quite rough for the shooting shenanigans. I picked Hunter Clade for their solid open play strengths and forward deployment shenanigans in Gallowdark. Having a team that can switch between shooting and melee seemed like a great boon for Gallowdark games. The Alpha’s Control Edict, which mimics the Breach and Clear ability that the Imperial Navy Breachers have, felt like stealing a tool from a team tailor made for Gallowdark games.

This roster represents some of the choices most Hunter Clade players need to make when building their rosters. I’ve elected for Vanguards over Rangers, to allow me to move and take objectives more actively with Martial Protocol, which allows re-rolls near objectives or when standing still. Rad Saturation also causes your basic troopers to tarpit fairly easily, buying time for their long-legged brothers to come give a sharp hug.

I’ve prioritized roster flexibility with the Ruststalkers instead of my skitarii. Ruststalkers have the option to take Transonic Blades (Rending 4/6), or Chordclaws (Balanced 4/5), which both specialize on different targets. Blades work better against 10-wounds or crit-weak operatives, while claws can take down 7-wound targets consistently. I don’t have the full 4/4 split because I have a set of infiltrators for backline and frontline duty, along with games where I want to spam the neurostatic interference. Power swords can put out more than enough damage to remove opposing operatives efficiently, cutting down my opponents’ available plays.

My primary goal is to remove my opponent’s pieces to trim down their possible moves, and attempting to do that in as few activations as possible. The Hunter Clade has some great tools for this – Sicarians can draw out moves, and Skitarii that can lay the hurt down when operatives fall out of position. If an operative won’t have a productive move, then use the AP on secondary objectives or mission objectives. However the most important thing is to be flexible on each step of set up, as you can make adjustments at operative selection, equipment, and tac op selection that can shift games in your favor. Having models that can incapacitate more than 1 model in an activation is a the main draw of Space Marine and Harlequin kill teams. For 1 CP, Accelerant Agents can have up to 5 Sicarians on the team doing the same.

The only 2 equipment I haven’t really taken are the Censer Bearer and the Diktat’s Communication Link to generate CP. Comms units are too valuable a commodity to spend time generating CP; I want them feeding AP to the arquebus or plasma gunners.

Again it’s good to look at the map and opponent’s perceived style when picking Tac Ops. For example there was a game where an opponent took Retrieval over Mark Target in Gallowdark, but seeing as Gallowdark makes it excessively difficult to make it to the back line, it wasn’t a good choice.

You have two choices: Seek and Destroy or Recon. I generally prefer Seek and Destroy if I expect to be in danger on turn 1, and Recon all other cases. As far as faction Tac Ops go, I haven’t used Relentless Pursuit, I always take Calculated Eradication, and I sometimes take Assassination Order.

With 11 operatives and mixed threats, it’s generally easy enough to push through a flank and open up opportunities to score Recon. Recon also provides a handful of early mission actions, when models are on Conceal and getting into position for turn 2. Plant Signal Beacon and Triangulate are the stand-outs most of the time. Plant Signal Beacon is scorable from any model pushed up the board, which Sicarians and Vanguards are always doing. Meanwhile Triangulate is easy to do on turning point 1 while under a Conceal order or if a flank collapses.

Rather than give a full breakdown of each game, we’ve asked Travis to provide notes on each, including what he took, calls he made, and anything that stood out. You can find rosters for his opponents on Best Coast Pairings. 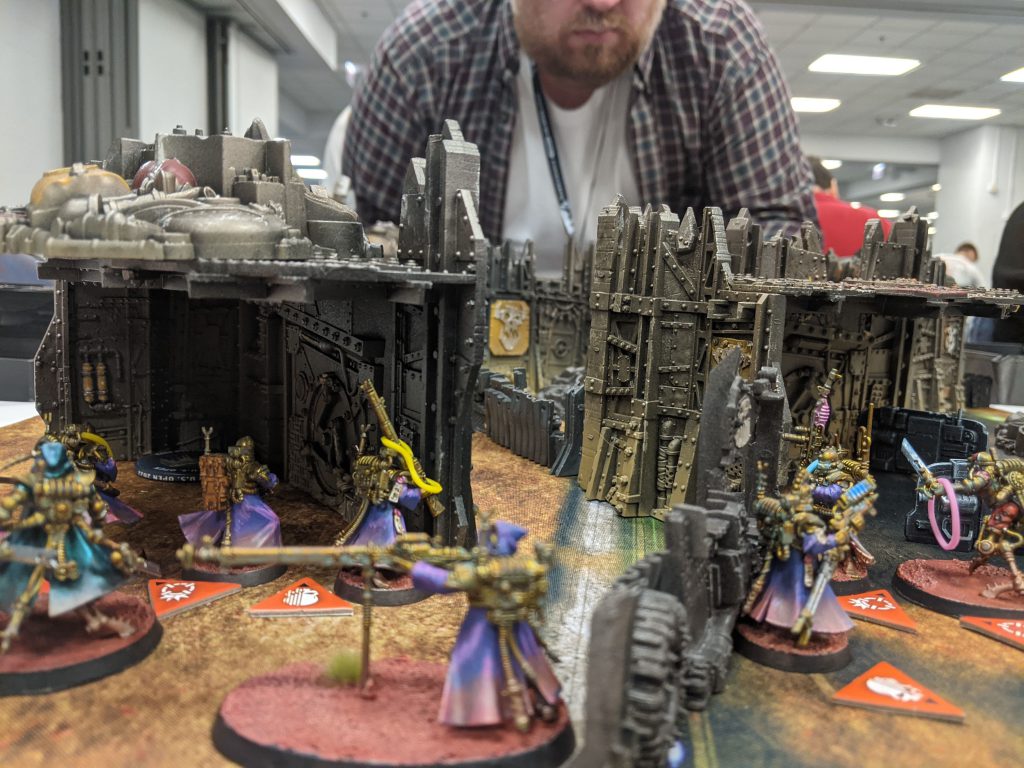 Round 2: vs. Josh Schonaerts’ Intercession Squad

Round 3: vs. Janis Gilham’s Intercession Squad

Round 4: vs. Leander Garrett’s Hunter Clade

Round 5: vs. Joe Bell’s Pathfinders 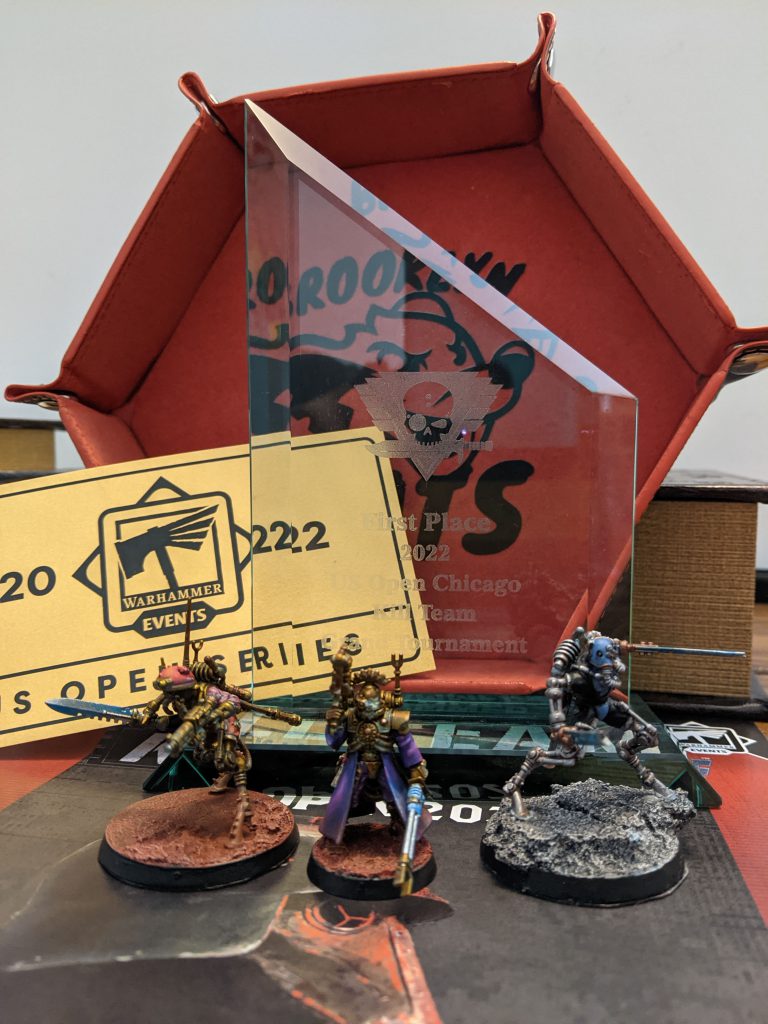 I am personally not super enthused by some of the mission designs; sometimes Turning Point 1 can feel like a bit too much of a “throw away.” Teams with forward deploy currently enjoy a huge advantage which is fine, but not all bespoke teams have ways to interrupt this. Kommandos stick out even more in this respect, as being able to set up 2 buttons on Turning Point 1 on Exposed Trove seems like very sketchy balancing.

On the topic of mission complaints, Mysterious Signature is just not fit for competitive play – the 16% chance of a player getting 4 VP near their deployment is just in poor taste. Especially because it gives the following play a 33% change of getting the last 4 primary mission vp on their side. It feels needlessly coinflip-y for a “competitive” game.

I think without terrain the rooms are a little too barren, and the games might get stale sooner than they would have on open play. One upside is that it does seem like players enjoy the fewer “gotcha” moments in Gallowdark games. Oftentimes on Open play, more experienced players can really abuse terrain rules and line of sight in ways newer players are just not ready for.

Having a team that plays both melee and shooting very efficiently means you can react to opponents more fluidly. This makes kill team selection that much more important – things like blades versus phosphor blast pistols were not throwaway choices. A repeated lesson I try to espouse is to not take equipment statically. I often chose different operatives and different equipment for different opponents and it made a difference multiple times.

If you made it to the end, thank you for spending the time with me! I’ve been putting on monthly locals and narrative campaigns since the start of the release. With all that experience, my team the Brooklyn Rats are putting on the New York Open: Kill Team Grand Tournament on November 12-13! We’re running a 48-player, 2-day, 6-round GT, as well as separate Saturday and Sunday narrative events titled Claustrophobia and The Hunt. Tickets are on sale NOW, and we have a hotel block reserved already! We’d love for anyone who read this article to come through. If you can’t make it, give us a follow on Instagram and we’ll keep you up to date on future events!