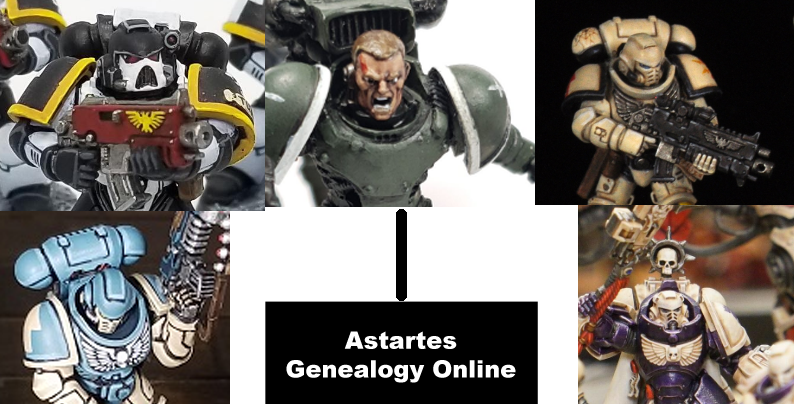 In this series we look at a couple of space marine chapters that share a common theme. In today’s article we are going to cast our net towards the Goonhammer successors featured in the HTPE article. If you have a marine chapter or theme you would like us to write/argue about why not drop us a line in the comments, an email at contact@goonhammer.com or a twittar.

Today we have the following chapters up for review:

In future articles there will be a fair bit more debate, with people pitching in different suggestions. However this time around we are dealing with people’s homebrew and believe me no one knows a chapter like the person that created it.

My many thanks to the Goonhammer(ers) that sent in words and pictures for this one. 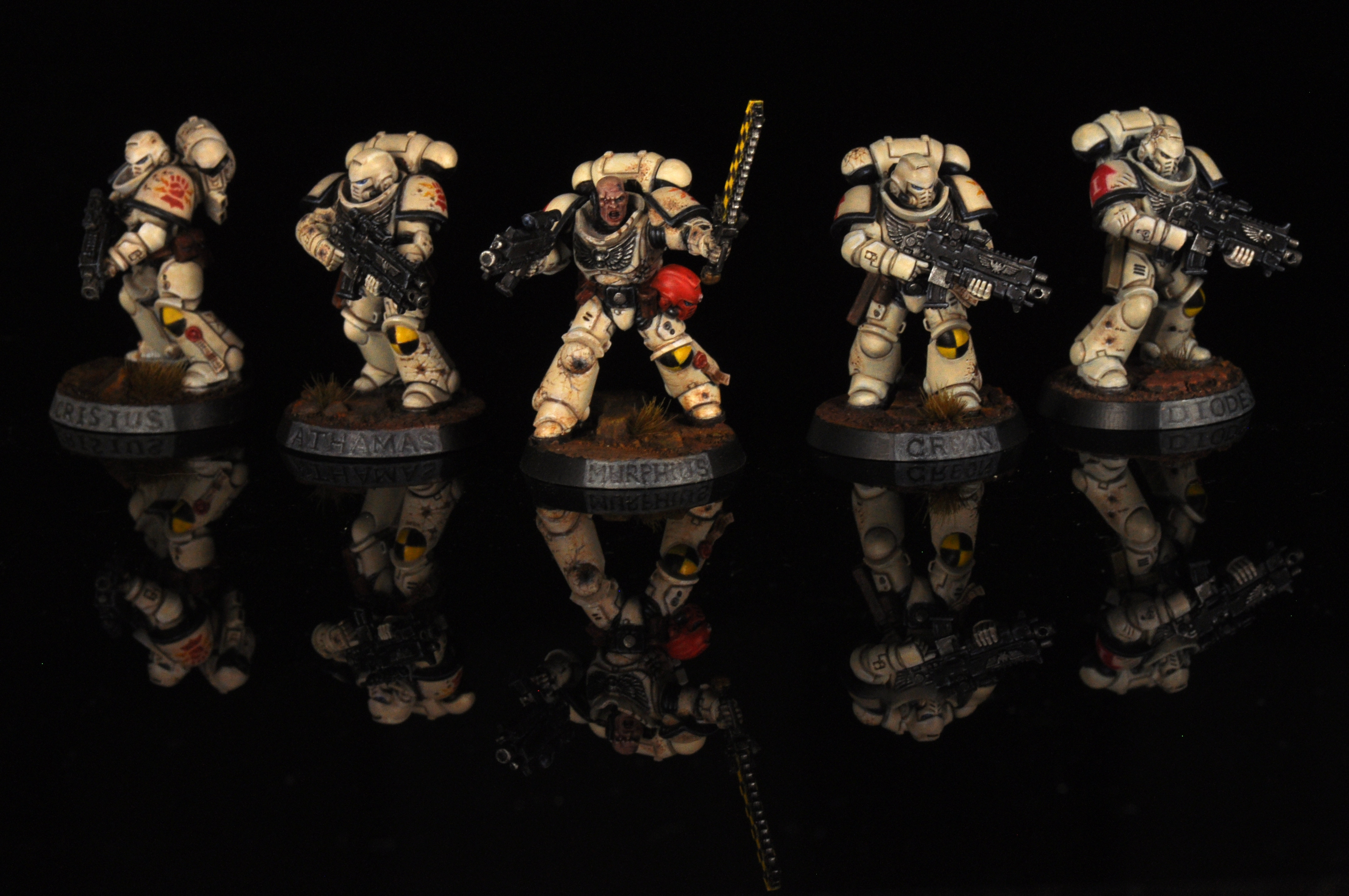 Much of the lore for the Excoriators is developed in the novel Legion of the Damned. Excoriators feel a close kinship with their founding chapter, the Imperial Fists, and look forward to the day the legion is re-formed. Much like Imperial Fists, the Excoriators are well versed in constructing fortifications and defending dug in positions. On Certus Minor during the Cholercaust Blood Crusade the half strength fifth company of the Excoriators organized a defense of the capitol, utilizing the largely ceremonial “Charnel Guard” and any civilians able to competently weild a weapon. They demolished a ring of dwelling around the city and fortified the inner structures to create open firing lanes that the invading hordes of warp spawned monsters and frenzied cultists had to cross. The highest purpose of an Excoriator is to put themselves between the Emperor and his enemies. Every round and blow they take is enshrined in their armor, each one being one less the enemy has to strike against humanity. 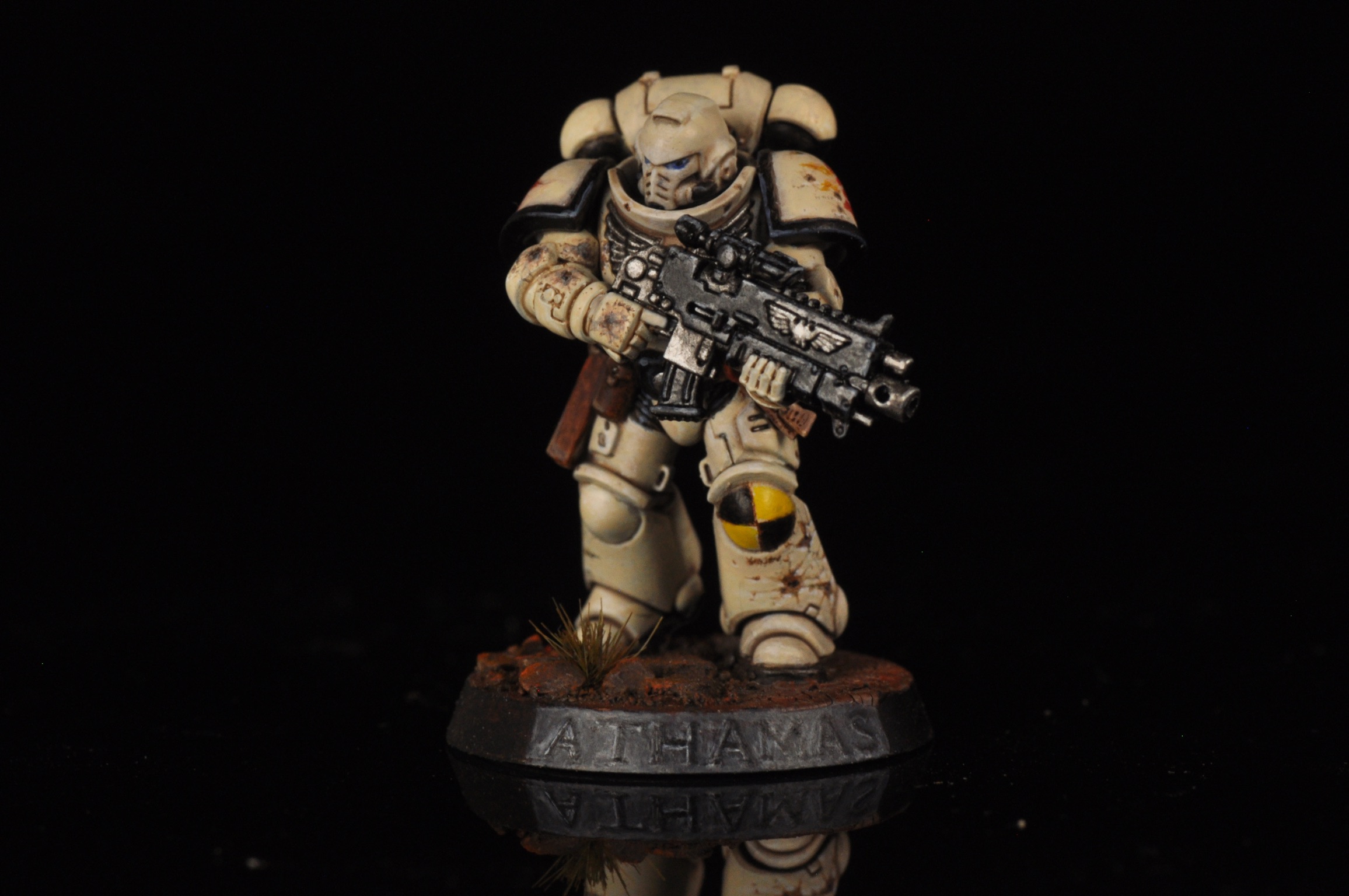 Rogal Dorn is their primarch. Some Excoriators suffer from an intermittent affliction know as “Dorn’s Darkness” where they become turned completely inward reliving Dorn’s pain at the discovery of the broken Emperor. They were created from the defenders who manned the walls of the Imperial Palace during the Siege of Terra.

Duellist
(When fighting in melee against infantry or bikers, unmodified To Hit rolls of a 6 always hits and automatically scores a Wound. )

Excoriators settle arguments between their brethren by engaging in knife duels. Facial scars are commonplace among seasoned troops. This sort of casual knife fighting makes them fearsome opponents in melee combat.

Stalwart
(When rolling To Wound rolls for attacks against models with this trait, an unmodified roll of a 1 or 2 always fails, irrespective of the Strength or abilities of the attacker.)

Excoriators are tenaciously stubborn and will hold out against all but the most grievous wounds in order to defend humanity.

The Regal Skulls By Kevin Genson 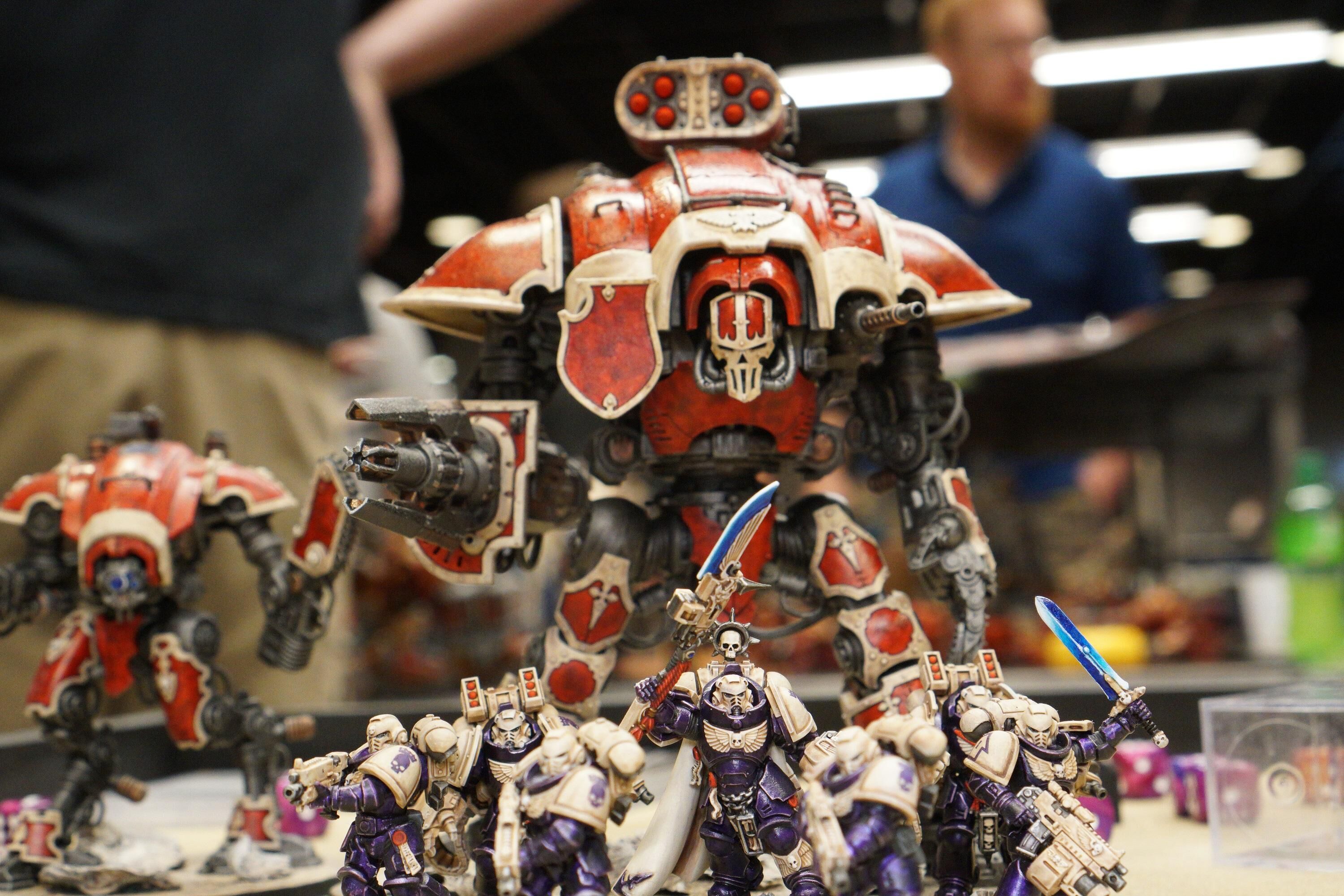 Regal Skulls, with Knight back up by Kevin Genson

When I first put together the idea of the Regal Skulls, I loved the idea of a Psyker heavy force. Something that was a real powerhouse of Primaris forces boltered with Librarians. Unfortunately I ran into a few problems… 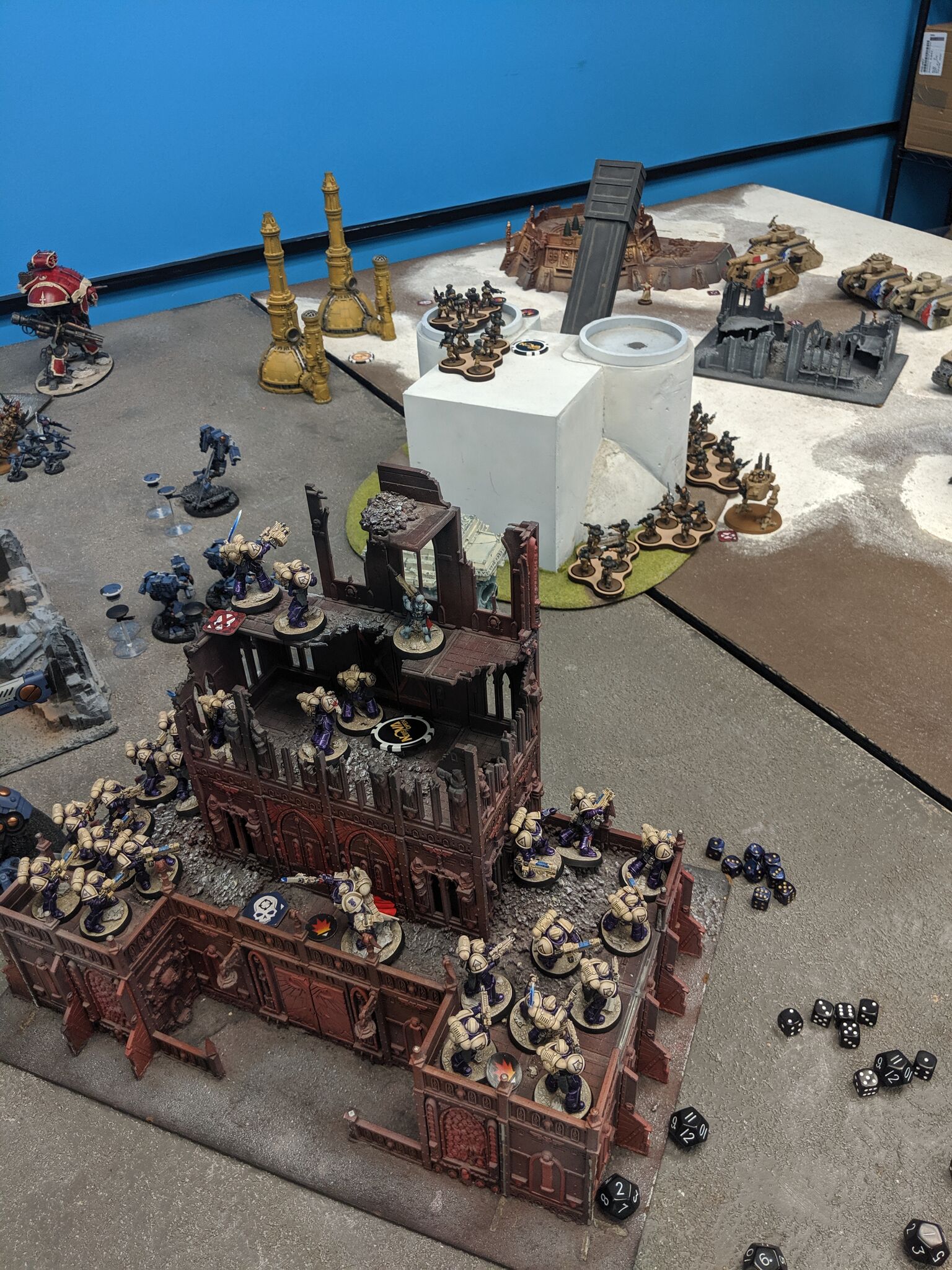 In the pursuit of a Primaris only force, I ended up with Deathwatch. The rules were flexible, with a lot of benefits under SIA that are now standard for most Chapters thanks to Doctrines. So with all of the options now available (and DW sadly getting left behind), I’m back to the drawing board.

So what’s my plan?

I have no idea.

But these guys will be a part of it. 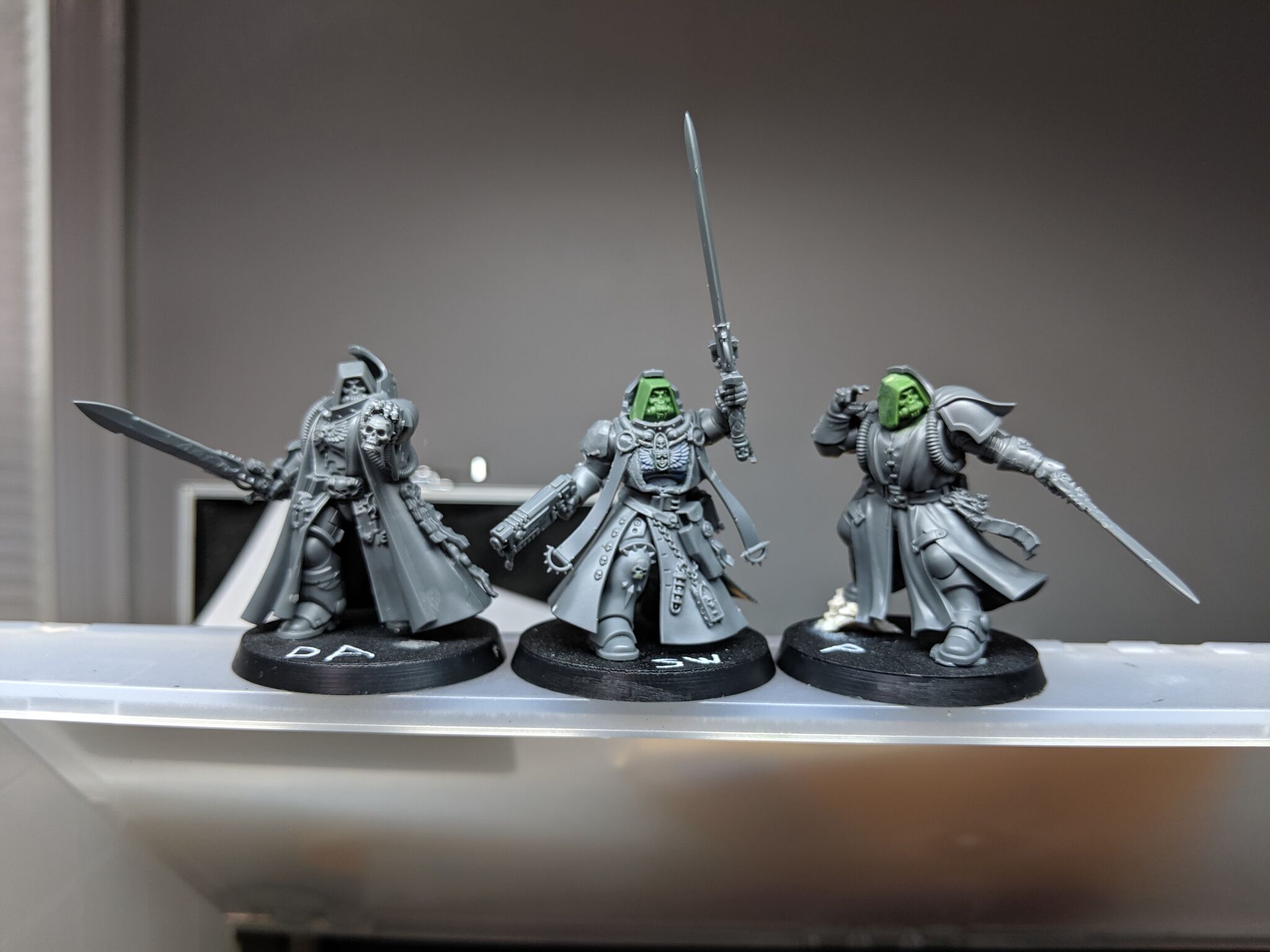 With any luck Psychic Awakening will include some fun options for Astartes psykers. In the interim I basically have four options:

I suspect what actually happens will depend on Psychic Awakening. In the interim I need to get back to painting after my post-NOVA funk 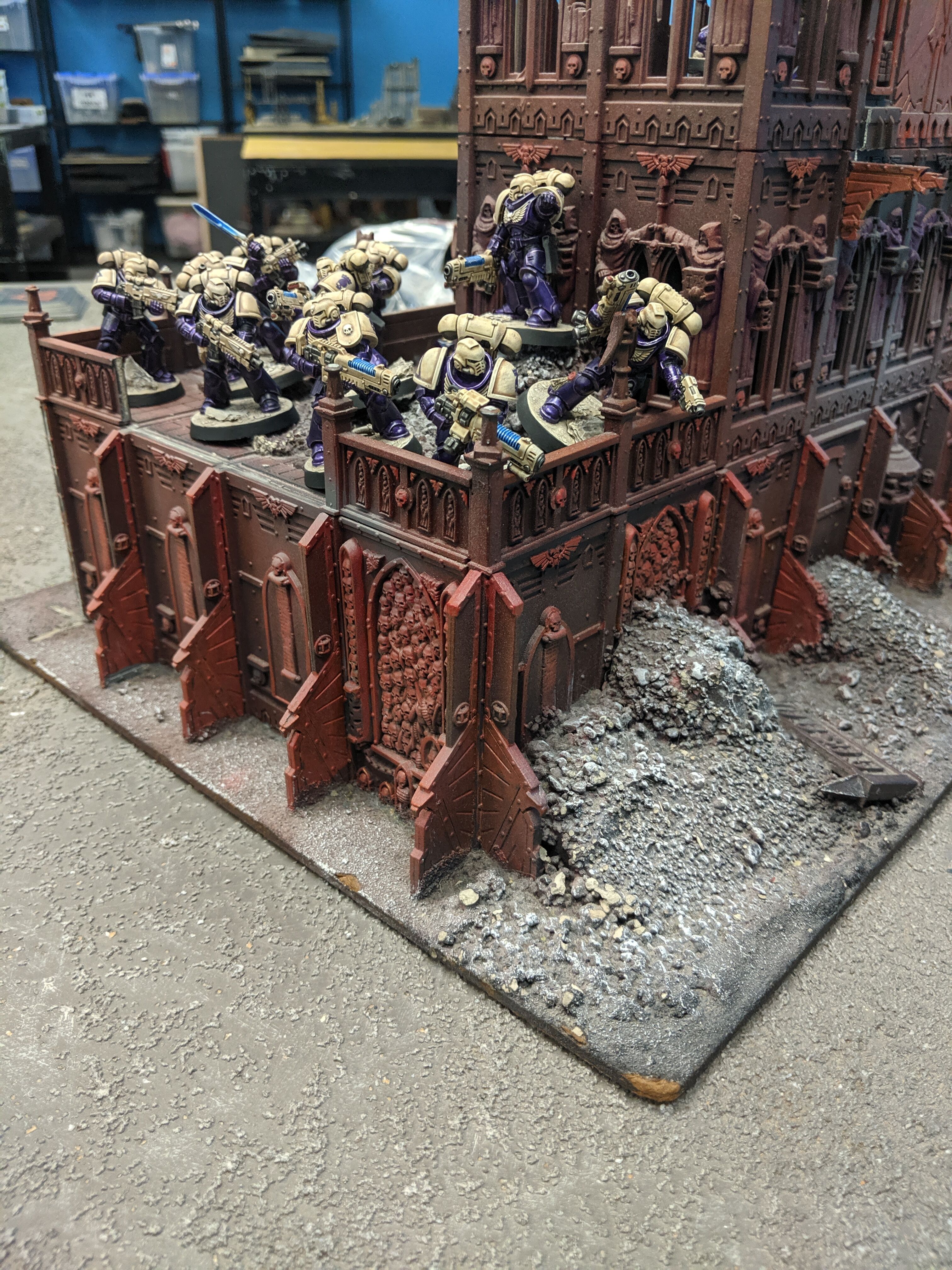 Regal Skulls On The Defence By Kevin Genson

When I started this project I chose Marines because I like the vehicles in the Marine range (circa 2008), and so I lean towards mech lists even though they were not the most effective lists at any point I was collecting the army (5th and then 8th edition).  The 4th company I collected initially was meant to be an armored company and the original plan was to have everything capable of moving 6+ inches or fitting in something that could.

Ot Neba is an unknown founding, but most Imperial records list them as a successor of the Iron Hands. 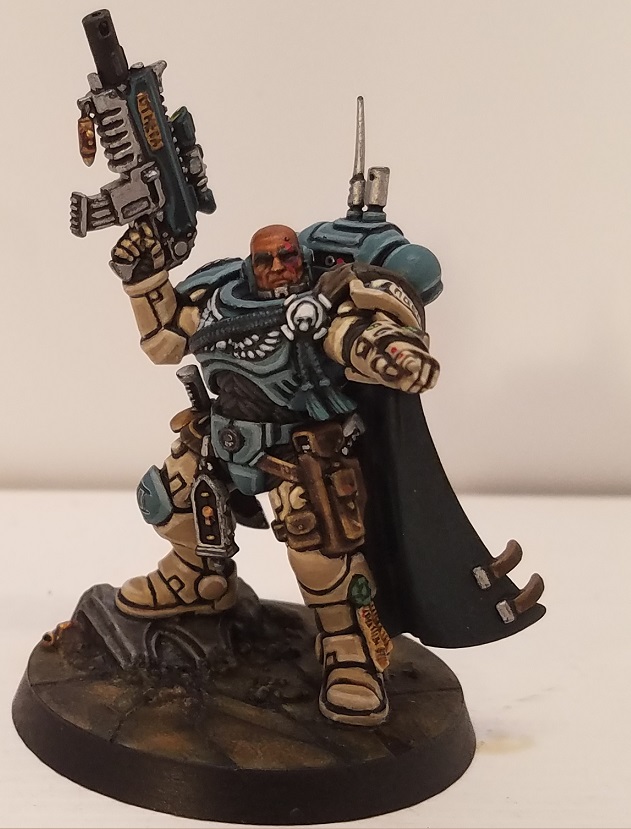 I use Iron Hands rules as I want to be able to use armor and being able to move and fire heavy weapons is a prerequisite for running certain vehicles.  That said, I have no intent of using chapter relics or characters. I originally planned on choosing my own chapter tactics, but Hands effectively had everything I wanted.  Stratagems, warlord traits and psychic powers are just gravy.

Swords of Davion by Coda

The Swords of Davion arrayed for battle. Credit: Coda

“Tell me guardsman, who is their best fighter? Who has slain your comrades? Who do you fear amongst them? I will find them. I will fight them, blade on blade. I will beat them. In doing so I will deliver you the victory you crave.” – Tiberius Rex, Chapter Master of The Swords of Davion, M42

The Swords of Davion are a young chapter, being founded in 738.M41 during the 26th founding. They are based in the Segmentum Ultima in the Davion sector.

The Sword’s primary cause for founding was to guard the Imperial Davonic Republics, a cluster of Imperial systems surrounded by warp storms, with Davion Primus forming the seat of power with the Swords being located in Davion Secondus, a smaller planet orbiting the same sun.

Swords are an important part of Davonic culture, forming a large part of their sector myths, with children being raised with stories of noble knights slaying dragons, blade in hand. Kings in the time legend rising up through martial skill and honourable combat to save the masses. Heros emerging, seeking to become ‘worthy’ and enduring trial after trial in order to achieve noble goals.

This informs how they fight. The Swords reckless duelists, favouring close combat and jump packs over most other forms of war. Indeed from the moment of their founding they found that they excelled in this method of war, charging forward and beating the enemy with superior equipment and individual skill.

In later years, thanks to the Tau incursion in M41.850 and the subsequent reforms afterwards, the Swords have become tempered. Nothing I can type here will encapsulate this more than the words of the Arch Heretic, Warlord of Fates, Taker of Names, heretic Sug-dar De-Cokan:

“They will appear to desire only to take the heads of the most powerful of the foes arrayed against them. Ignore this. It’s a lie. They want you to underestimate them. They want nothing more than to lure you into a trap of your own hubris.

They will attack you head on, seemingly throwing reason and tactics to the wind. Seeking a doomed duel to the death…. all the while driving a knife in the dark towards your kidneys. That is what it is to fight the Swords.” 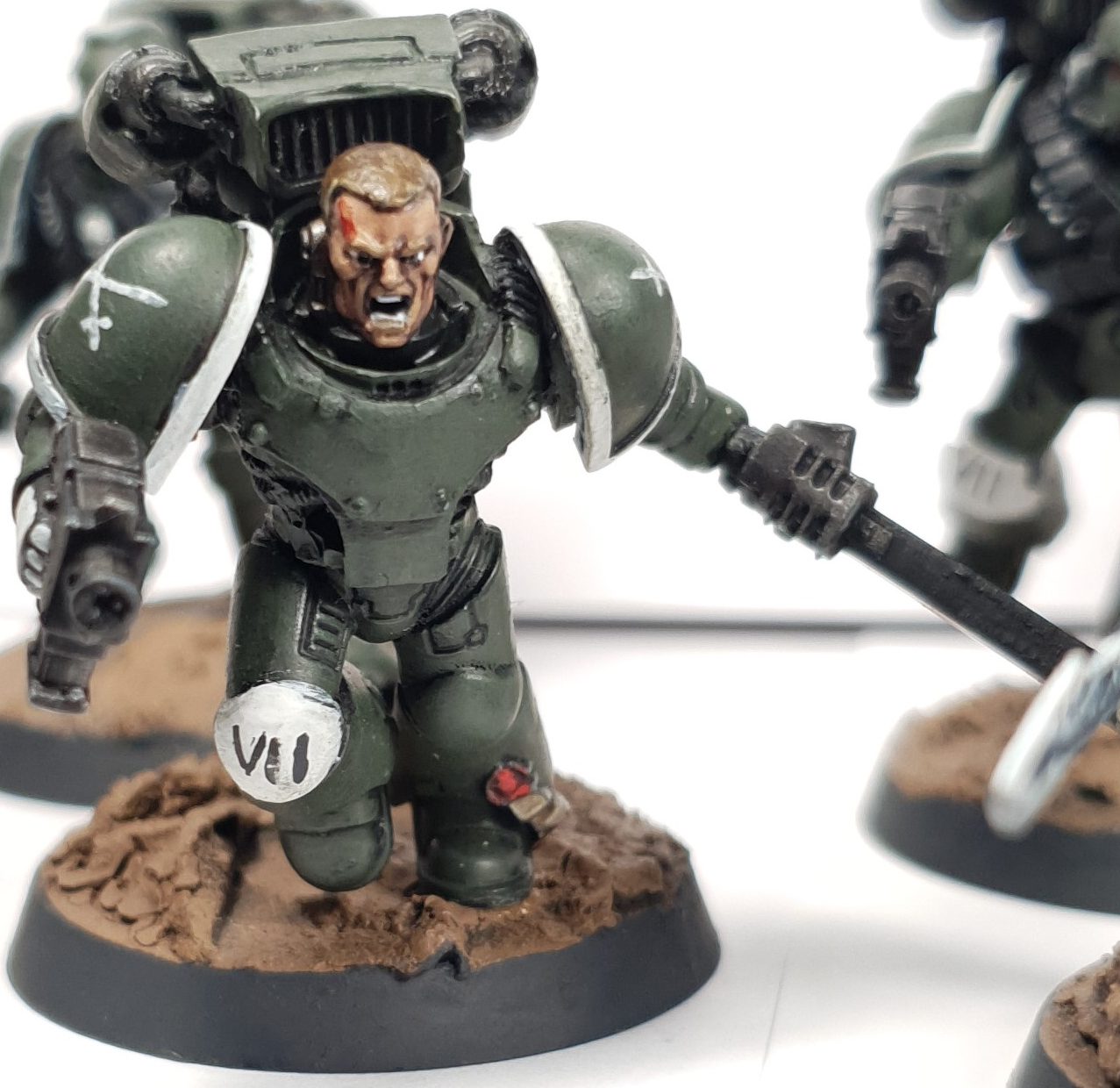 Swords Of Davion Assault Marine on the charge, Painted by Tyler “Coda” Moore

Of course there is much, much more to the Swords. However this is not the time and place to tell these tales. I could wax on about the once exiled Tiberius Rex his impossible quest or the rediscovery of ancient glory. Maybe the the almost fatal defence of the Davionc Republics from the 3rd Phase of Expansion or the evacuation of Davion Prime would be suitable case studies of the Swords of Davion.

These are tales for another time and place.

“Who is our father? What noble genesire do we hail from? No idea, none at all my dearest cousins of Ultramar, Armato and beyond. What matters is that we are here, blade and bolter in hand, ready to fight for these people and their home.”  – Sergeant Morien, 2nd Company, Squad VII, Orbit of Brakian, prior to planetfall, Late M41

The Swords use the following rules:

As I alluded to above, it is true that the Swords, especially earlier on in their careers are reckless beyond measure, caring only for dueling and glory. This leads a higher than average attrition rate in swords aspirants, a heavy price for a young rebuilding chapter.

However this early crucible moulds the survivors, producing cunning astartes more than willing to play up their reputation, while planning their and seeking to entrap their enemies with rapid movement, insurgency and deception.  To represent this, I use Codex Supplement Ultramarines. This covers the more tempered side of the chapter.

The following Chapter tactics however are very much the reckless side

Hungry For Battle
Units with this trait get +1 to their Advance and Charge rolls.


The Swords do love to charge and obtain glory…..

Whirlwind of Rage
In the combat after a model with this Tactic has charged, was charged, or made a Heroic Intervention, when rolling its attacks, any unmodified to hit roll of a 6 causes an additional hit.


And once they get there, all bets are off. Nothing matters except victory. While they may appear to be duelists, the Astartes of the Imperial Davionic Republics fight with an exceptional level of brutality in their swordsmanship.

White Panthers by The Chirurgeon

The White Panthers are a chapter that hews fairly closely to the Codex Astartes when it comes to their heraldry, but don’t have a listed successor on record. I haven’t yet decided how I want to run them. When I started playing the chapter I envisioned them as a quick-striking force with lots of melee elements. As I built them however, they’ve relied more on a broader mix of squads to get the job done. I haven’t yet decided whether I’m going to run them as Ultramarines successors or White Scars, but I’ll run them as successors either way. 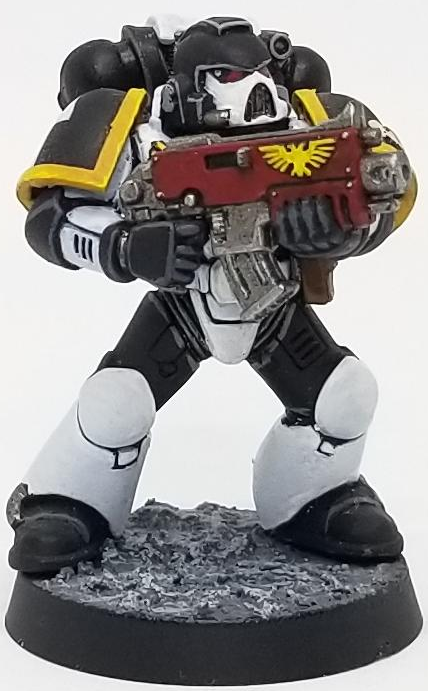 I’m planning to play them with one of the two following trait pairs, depending on how I want to run them:

Next on my painting schedule is to finish my small marines, doing another assault squad and finishing out the second devastator squad, then I’ll look at some Assault Terminators. I may eventually do some Primaris marines, but right now my plan is to do a single company of White Panthers and put the Primaris guys into my Deathwatch army.

Well that was a fun trot though some cool and good chapters. If you have a chapter you want us to investigate, or a homebrew we could feature, why not contact us on Twittar or by email.

If you like my stuff or have questions/feedback you can find me around the internets and the rest of my goonhammer articles here: