A lot of fuss was made about Tactical Deployment when it first previewed; Games Workshop hyped it as new way to play competitive 40k that might become the norm for tournaments. Instead what we got was a weak release that had some interesting ideas but was little more than a naked attempt to sell more Battlezone Manufactorum boxes. Our review of the initial releases – both the book and the cards – weren’t particularly kind, and were more baffled and disappointed than angry.

What is Tactical Deployment?

Before we get too deep into the new(ish) cards, let’s go back and do a quick review of the rules for Tactical Deployment:

Essentially Tactical Deployment is a rules framework for competitive play that uses player-placed terrain. However instead of the players placing terrain provided by the event, they each bring their own terrain, purchased ahead of time using a pool of allotted points. The terrain itself must all be pulled from the same Battlezone, and the traits of the terrain are determined by the datasheet for that terrain feature – something like a Storage Fane might have Breachable, Defensible, Light Cover, and Scalable, for example. The datasheets also define the footprint of the terrain feature. When players set up the battlefield, they can place their terrain in their territory, with some restrictions on where and how pieces can be placed.

Generally speaking, this isn’t a bad idea; some events already use player-placed terrain – the FLG-run Lone Star Open was one such event, and I generally felt like it worked out well, even if I didn’t love the actual pieces they had on some tables. Player-placed terrain also makes it possible for players to take fortifications  or units they might otherwise not be able to take, which is pretty cool for the one or two fortifications that aren’t completely awful.

That said, there are two major problems with Tactical Deployment as an approach to player-placed terrain:

While the first of these is irritating but surmountable, the second point is ultimately what torpedoes Tactical Deployment. Any notion of taking larger terrain that can hide units like knights or Mortarion are out the window, and even within the restrictions of GW terrain, the available builds and terrain options aren’t particularly enticing, offering few flat walls and none of the terrain has bases that you’d use to define area terrain. 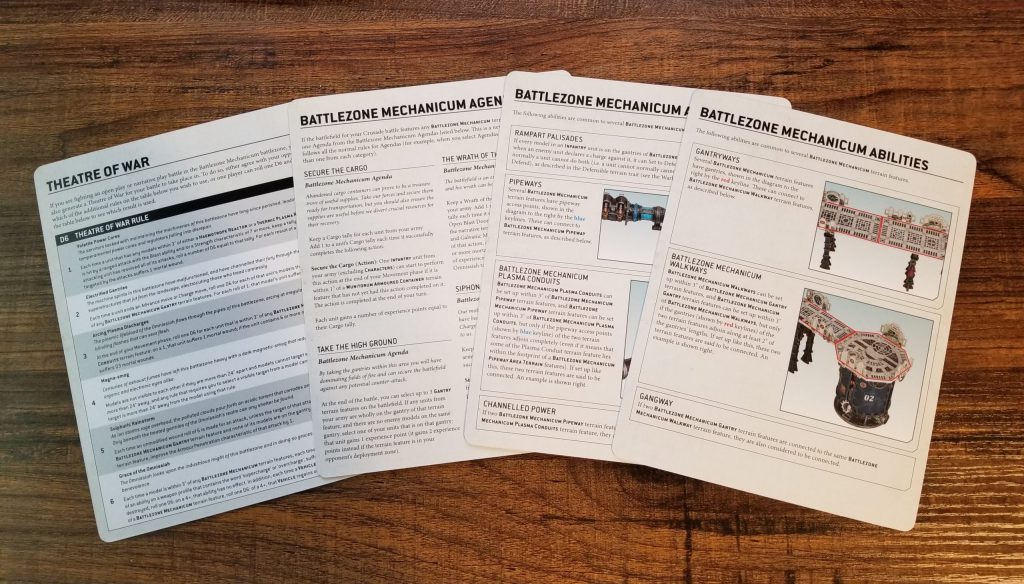 Tactical Deployment launched with datacards for the Sector Manufactorum, which was the terrain set released shortly after the 9th edition launch. This included a number of small buildings like the Storage Fane and Sub-Cloister, plus the ability to take the Sanctum Administratus, a large building with some good line of sight blocking potential. Nearly one year later, Games Workshop released Battleozne: Mechanicum, which features terrain datacards for its Sector Mechanicus terrain, to almost no fanfare. Still, I’m what you’d call “a stupid mark” when it comes to stuff like this, so I picked up the cards and decided to give them a look.

There are 16 datacards here; 8 for Matched Play and 8 for Narrative Play. Collectively, they cover:

Everything with an elevated platform – that is, everything except the pipes, haemotrope reactors, and armored containers – has the Dense Cover trait, making shooting through the walkways an interesting exercise, but literally none of these have obscuring, so your only chance of actually protecting units with this terrain is to stack armored containers or hide behind a furnace or reactor. These also have pipeways you can use to connect them to pipes, and you can connect walkways and raised platforms together to make larger structures combining walkways and furnaces and magnavents, etc.

As with Sector Manufactorum, every terrain datasheet has a special rules for the terrain feature; Matched Play datasheets have one or two; the Crusade datasheets typically have those same rules plus one more, just to make things more complicated. For example, the Ferratronic Furnace comes with the Vantage Point rule in matched play, which gives units on top of it a +1 bonus to their AP shooting at units below. The same card in Crusade has that ability as well as Blast Door and Vents, which lets Infantry units open the door to the furnace as an action to do D3 mortal wounds to nearby units, and that can be boosted if it’s connected to a nearby haemotrope reactor. This is a neat rule, but it’s really the kind of thing that belongs in Kill Team and not so much full-scale games of 40k.

The set also comes with two additional cards for Crusade games: A Theatre of War, which has 6 random effects you can roll for before the game to add an effect to your mission, typically involving how they interact with terrain, and four Agendas, which give your armies other, terrain-specific ways to score XP. These agendas are pretty cool, and help make the battlefield and terrain matter. They’re a cool idea. The theatre of war, not so much – effects like Electrified Gantries, which causes units to potentially take mortal wounds every time they Advance or Charge on a walkway, are just adding unnecessary randomness to a game and discourage you from using the most interesting terrain features on the table. 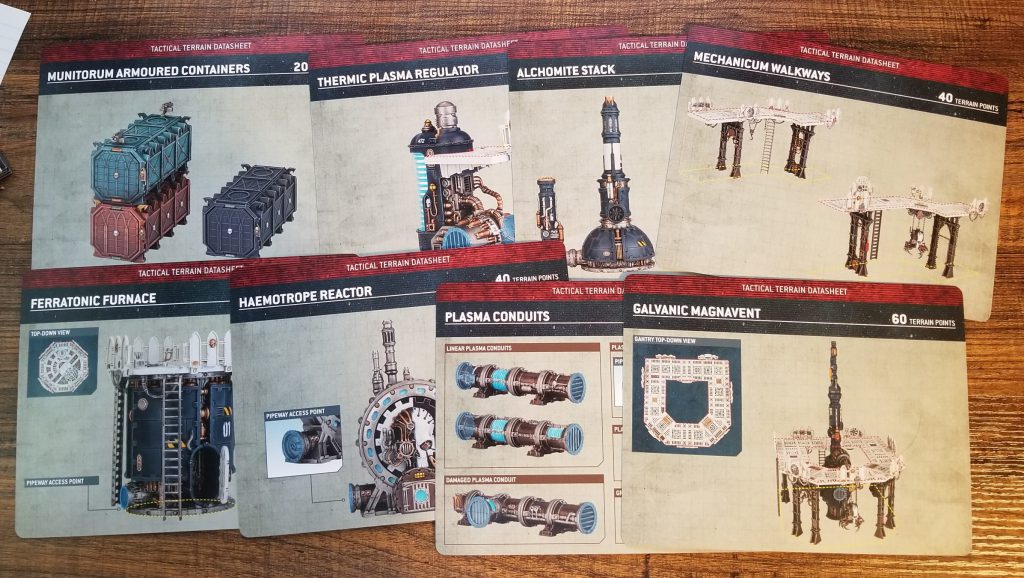 Making Use of These Rules

Ultimately Tactical Deployment ended up being a frustrating disappointment not because of the concept – a dedicated mode for player-placed terrain that asks players to bring their own is a fine concept, even if it has some logistics challenges at larger events (at the very least, you’ll likely want a system for renting terrain to players who don’t have their own sets) – but because of the terrain rules themselves. There’s a frustrating lack of obscuring terrain features in the rules in either battlezone, and you’re capped at one large, windowed feature if you want to take the one meaningfully large obscuring terrain feature, and none of this has defined bases. Plus you don’t really have the ability to combine dense and obscuring terrain meaningfully. The end result is a set of terrain rules ostensibly designed for matched play that don’t actually do what you need them to in matched play.

So, short of writing a whole new set of rules for terrain in Tactical Deployment – and that’s something I’m realllly tempted to do in the future – there’s not a lot we can do to fix Tactical Deployment for Matched Play. There is, however, a decent amount we can mine here for Crusade Play if we want to do something interesting with these.

These are the real winners for me – Agendas that players can take that have them doing something specific to a battlezone and/or a terrain feature. I think this is a really solid idea, and something that you can just lift out of here and also don’t really need these cards for, but they give you a great jumping off point. As a GM, I see the value in these as something I can use to shake up specific games. I can assign my players a specific battlezone (maybe) or at the very least have them play with a specific terrain feature, then give each of them an extra agenda that is terrain/battlezone-based. This is a great way to represent key battlefields and locations, and make where the battle takes place feel more important. I’m a big fan of doing things like this, and the Agendas are a great way to make that matter and incentivize players to do something without forcing them to do it or giving them too much to remember.

The Battlezone effects I’m less enamored by, and generally I don’t like these unless they’re really important for the mission itself. We’ve reviewed a ton of these in White Dwarf Flashpoints over the last year, and they’re usually bad, with the occasional gem.

So, similar to our last review, the Agendas here are good, and there are interesting rules in the Tactical Deployment mission pack, but the terrain sets you’re forced to play with and the rules for those sets are just not good. As an inspirational piece for your own Crusade campaigns, this can be an OK pick-up, but otherwise there isn’t much value here, even if you’re into Tactical Deployment – the new terrain set isn’t nearly as good as the Manufactorum one from a rules standpoint. You probably already skipped this one anyways.