We’ve spent a lot of time discussing how hard it is to kill things like Grey Knight Paladins or Iron Hands Leviathans protected by Cogitated Martyrdom, but one thing we haven’t done is examine the discussion from the offensive side. What kind of weapons, what quantity, can actually do the job in a reasonable amount of time? This article hopes to take a look at things from a different perspective, replacing quality of fire with sheer quantity.

A lot of folks have recently been discussing the viability of large squad of Grey Knight Paladins, especially after the massive boost they got thanks to Ritual of the Damned. The idea behind the Paladin Bomb is pretty simple; you take maxed out squads of Grey Knight Paladins along with some support characters to provide a very lethal, very hard to kill base of firepower. A good example can be seen in Colin Kay’s Grey Knight Army that won 2nd place at GenghisCon. Several effects stack to mitigate incoming damage. Under the Tide of Shadows units are always in cover and if they are on terrain shooting attacks against them are at a -1 to hit. In the first turn you take one of the squads and apply Sanctuary (WC 6) to add +1 to their invulnerable saves and Armoured Resilience (WC 6) to subtract 1 from all wound rolls. Transhuman Physiology (2 CP) can also be applied to force all wound rolls of 1, 2, or 3 to fail but note that Armoured Resilience and Transhuman Physiology do not stack. Finally Redoubtable Defence (1 CP for 5, 2 CP for 10 Terminators) subtracts 1 from the Damage characteristic of incoming attacks. The end result is a unit of 30 T4 wounds with a 1+/4++ that forces a -1 to hit, -1 to wound, and subtracts 1 from all incoming damage. Note that with Brotherhood of Psykers active all of these psychic powers will get a +1 bonus to the Psychic Test, making them very likely to go off. For extra hilarity you can give the models Nemesis Warding Staves for a +1 bonus to their invulnerable saves in the Fight phase.

So how do we kill it? A full Paladin squad is around 450 points, so for the sake of fairness we’ll compare an equal value of offensive firepower. Given how scary they look thanks to their recent book it seems reasonable to try out an equivalent value of fully boosted Crisis Suits. It also seems reasonable to try the same unit against themselves, particularly since an offensively boosted unit of Paladins is frankly terrifying. We’ll also experiment with a set of Imperial Fist Centurion Devastators, who can put out an obscene amount of firepower. For each of the threats below I did my best to utilize every possible combination of Stratagems and abilities to maximize their output. Listing every possible ability would quickly turn this article into a novel, so for the specifics I highly recommend reading our reviews and Star Competing articles. 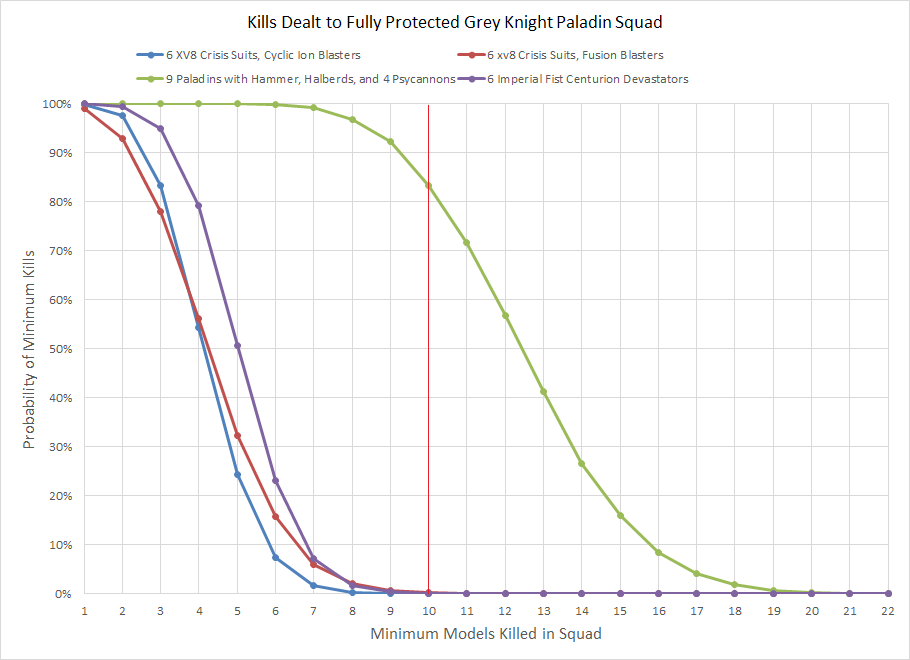 Unsurprisingly it’s very difficult to take out a unit of psionically enhanced Terminators, with only the combined shooting and assault of the mirror Paladin unit having a chance. Likely the unit would be Leadership 10 with a re-roll so removing any extra with morale would be a challenge. The Paladin unit would likely be even nastier when you take into account the additional mortal wounds from the use of Smite. The majority of the time half the unit would be wiped out from the specified shooting attacks, which isn’t exactly terrible given the equal points investment. It’s worth noting that the Imperial Fists could be a little more lethal here if the Paladins were the closest target, as they could then additionally benefit from +1 to wound, cancelling out the -1 from Armoured Resilience (though not affecting Transhuman Physiology).

Note: Games Workshop recently errata’d nearly everything about the section below, eliminating a vast amount of the protection offered to Iron Hands. Read more about it here.

Previously we established that massive, city-destroying units like Warlord Titans would have trouble dealing with the fairly incredible levels of protection that an Iron Hands Leviathan Dreadnought could receive. The units previously tested, on the other hand, tend to use a large number of attacks that might be able to grind away at the Leviathan. A Relic Leviathan Dreadnought and a supporting squad of 10 Intercessors is around 460 points or so, which is fairly convenient. The one difference from the previous test against the Paladins is that the Dreadnought is a VEHICLE, enabling a few bonuses for the Imperial Fist Centurion Devastators. Notably the core benefit of the Imperial Fists, the bonus to damage in the Devastator doctrine, is completely irrelevant. What really helps is the Seismic Devastation (1 CP) Stratagem from the Siegebreaker Cohort Specialist Detachment, which enables the possibility of deluging the target in mortal wounds. The change is below. 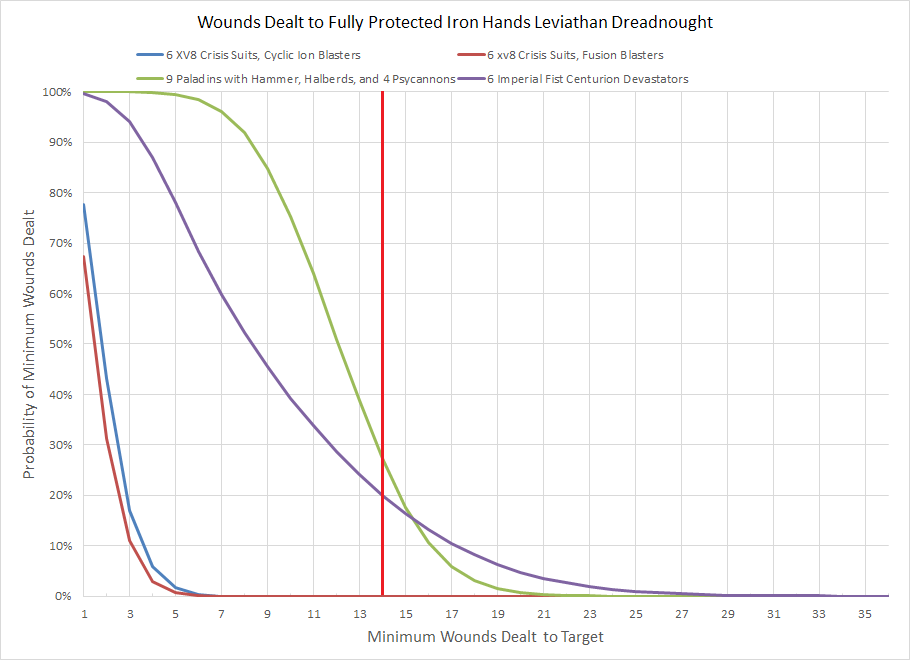 The Leviathan has 14 wounds, meaning the Paladins have a 27% chance of killing it thanks to their assault attacks which ignore Cogitated Martyrdom. The vast quantity of mortal wounds delivered by the Imperial Fists Centurions certainly poses a threat to the Leviathan with a 20% chance of success, but needing to get through the 20 Intercessor wounds (who also typically get a 5+ Feel No Pain) makes that extremely difficult. It should be noted that the presence of the Intercessors is the key source of resilience here; take away those 20 ablative wounds and the Centurions effectively have a 100% chance to delete the Leviathan. This can be seen in the chart below, where Cogitated Martyrdom is removed. 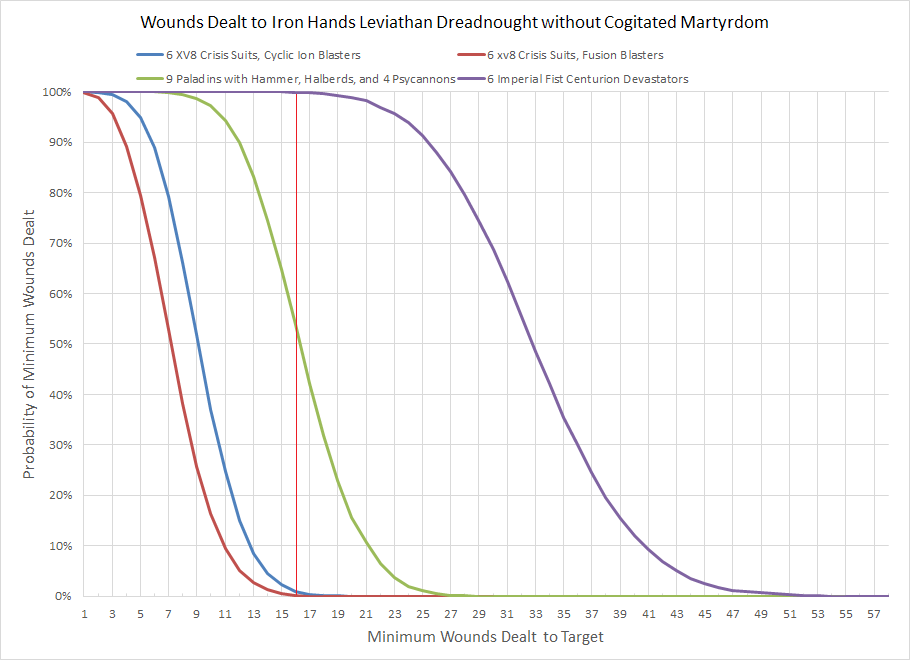 Just like that, these units have a chance. Our suggestion is, if possible, to focus down the Intercessors first – luckily, Imperial Fists have very good tools available for this.

I would like to give a shout out to novembermike for helping me with the Grey Knight numbers, and our good friends at 40KStats for doing what they do. One of the biggest challenges with analyzing the efficacy of units in 40K is quantifying what it takes to kill them. Grey Knight Paladins and T’au Crisis Suits are fun, but it’s not exactly relevant to a Tyranid player. In the future I hope to figure out a more universal way of showing what makes a unit vulnerable so that everyone can make use of the data. In the interim I hope this article was educational and entertaining, and I think you for reading.