Welcome to Horus Heresy Tactica, our series that provides a deep dive in a specific mechanic, interaction or aspect of play in Warhammer: the Horus Heresy.

Last time on Horus Heresy Tactica we covered the Core Reactions, the essential and reliable reactions that gets used again and again. Today we’re diving into the Advanced Reactions, those which are more situational and unusual, but follow the basic structure and rules as their Core counterparts.

As a note, we’re not going to be covering the Advanced Reactions provided by each faction in this article – you’ll have to wait for each legion and faction focus article for that. We’re just going to be looking at all the other Advanced Reactions you might end up using. At current that means that the pool of reactions in this category is pretty small, but we’re expecting them to be added to. When they are, we’ll update this page to reflect it.

An Advanced Reaction provided by the Talons of the Legion special rule, Combat Air Patrol is basically only available to the Legion Xiphon Interceptor. This reaction is in the Movement phase, and occurs when an enemy Vehicle Flyer enters from reserves into play. When this happens you can use this reaction to automatically bring your Xiphon onto the battlefield and shoot at it.

This is useful because it potentially allows you to get your Xiphon onto the field quickly – if your opponent is luckier with reserve rolls than you, or goes first, then you can get your flyer on as soon as they do. It also neatly stops enemy units Intercepting (see below) your Xiphon, which can make a huge difference. However, there are some problems.

First, the shots you make (because this isn’t the Shooting phase and thus you haven’t chosen to grant the Xiphon Skyfire) are snap shots making the chances of you doing serious damage minimal. Second, your fragile flyer is now on the field ready for your opponent’s Shooting phase where it may well get gunned down before it can do anything for real. 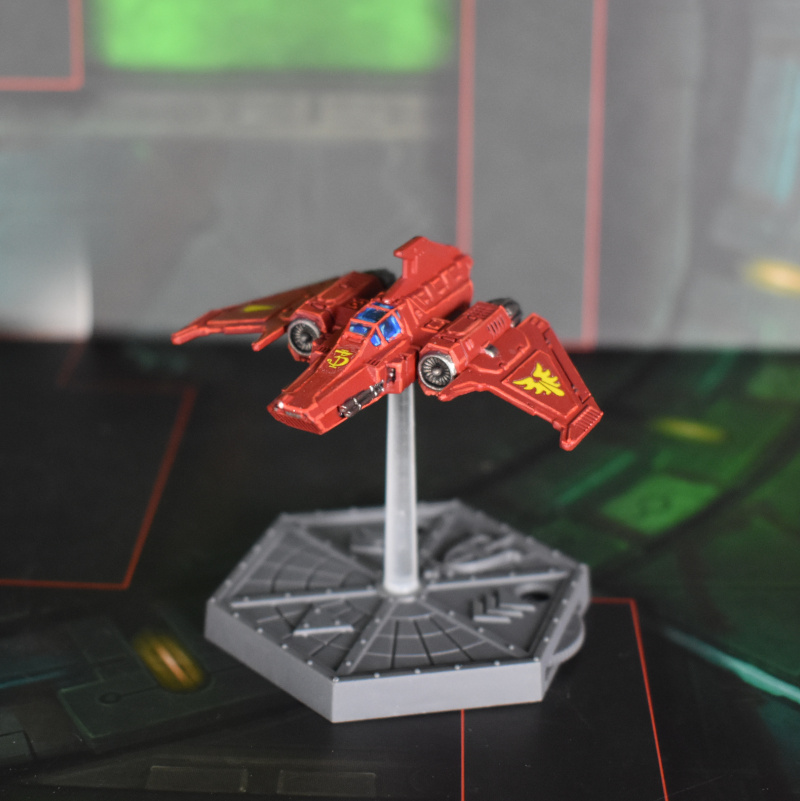 This is a very situational ability. This is best used when you’re desperate to get your Xiphon onto the field quicker than it otherwise could and you’re worried about it being shot at by interceptors, but also less worried by skyfire or other units in your opponent’s army shooting later. Given these specific conditions it makes sense, but that’s a niche. Probably best to mostly bring it on normally unless there’s a compelling reason not to.

Probably the coolest of the Advanced Reactions, Death or Glory allows a single model in a unit that was rammed (making this a Movement phase reaction) to make a single attack with a Melee or Ranged weapon. “Single attack” here is slightly loose wording, but we’re going to assume it literally means single attack – one hit. It automatically hits and damage is resolved against the Front armour, but if you don’t really hurt that vehicle then the model is removed from play cos it’s squished like a pancake. You, oddly, can’t make this reaction with a Vehicle.

This is dumb cool stuff of the highest order and can genuinely be worthwhile in a lot of situations. Ramming is one of those things that really gets glossed over a lot by players, but is shockingly effective and basically free. Once your troops clamber out of that Rhino, you should be running people over with it. That means as the runees over, you should try and cap that Rhino if you can, and there are a surprising number of ways to do it. Just remember that you can’t use Krak grenades because they’re restricted to the assault phase (which is an enormous shame) so you need a guy with a power fist, melta bomb, or something similar. If you’re lucky this can genuinely pay off massively, but be ready to lose the guy you throw at it. That means you should never sacrifice a terminator with a power fist for a Rhino… but for a Predator? Maybe.

This Advanced Reaction is an exciting twist on a Core Reaction, and while Greuso Protocol is limited mostly to Moirax its very existence makes them a very exciting addition to a Mechanicum list (and a baffling omission from a Knight Household list). It’s used in the Assault phase, and it in effect allows you to overwatch a charging unit that is targeting a friendly Automata or Knight unit within 12″. This is extremely cool, but does pose some interesting questions, like: if I have the reaction allocation can the unit being charged Overwatch and this unit use Greuso Protocol? Nothing in the rules seems to stop it, but ouch.

If your Moirax aren’t being charged and something is dumb enough to charge a valid target for this reaction nearby, they probably deserve pain. There’s almost no downside to using this if you have the reaction allotment to do so. In many cases the shooting from the Moirax will likely be better than the unit being charged, so if you have the reaction for only one make sure you’re firing with the more effective unit. If you have enough for two then question your opponent’s decision making and destroy them without mercy.

Probably the most commonly used Advanced Reaction, Interceptor allows a unit to make a shooting attack against an enemy unit that enters play from Reserve in their line of sight. It’s basically Return Fire, with all those restrictions, but in the Movement phase. It would be an impressively vicious reaction even if it weren’t for the two things that bump this up from nasty to horrifying.

First, Augury Scanners give units the ability to make this reaction for free, ignoring the normal rules for the maximum number of reactions in a phase. This means that for 10 points a unit can slam shots into an arriving unit with zero consequence.

The second thing is Pinning: you can absolutely pin an enemy unit arriving from reserves from shooting with this. The rules stat that Shooting Attacks can’t limit the actions of the Reacting units in future turns or Phases, but it says nothing about the target of the Reaction. And Pinning is cleared at the end of your following turn. This means that if you bring a unit in from reserves and it is shot at with Interceptor and pinned it will be pinned for the rest of this turn and for the entirety of your next turn. In effective it renders a unit more or less completely vulnerable for two full turns.

This makes units like Recon Squads with Nemesis Bolters (with an Augury Scanner) absolutely choice units for ruining Deep Striking Assault Marines and so on, and Telepath librarians are 100% worth spending a reaction to intercept with if it’ll more or less definitely ruin a unit for two turns.

Advanced Reactions are one of those rules that varies wildly in applicability and use. Some of them you’re likely to see crop up every game, whereas others you might literally never see in play. As the edition evolves we can expect to see more and more of these, and of course each faction has their own special one to add to the mix.