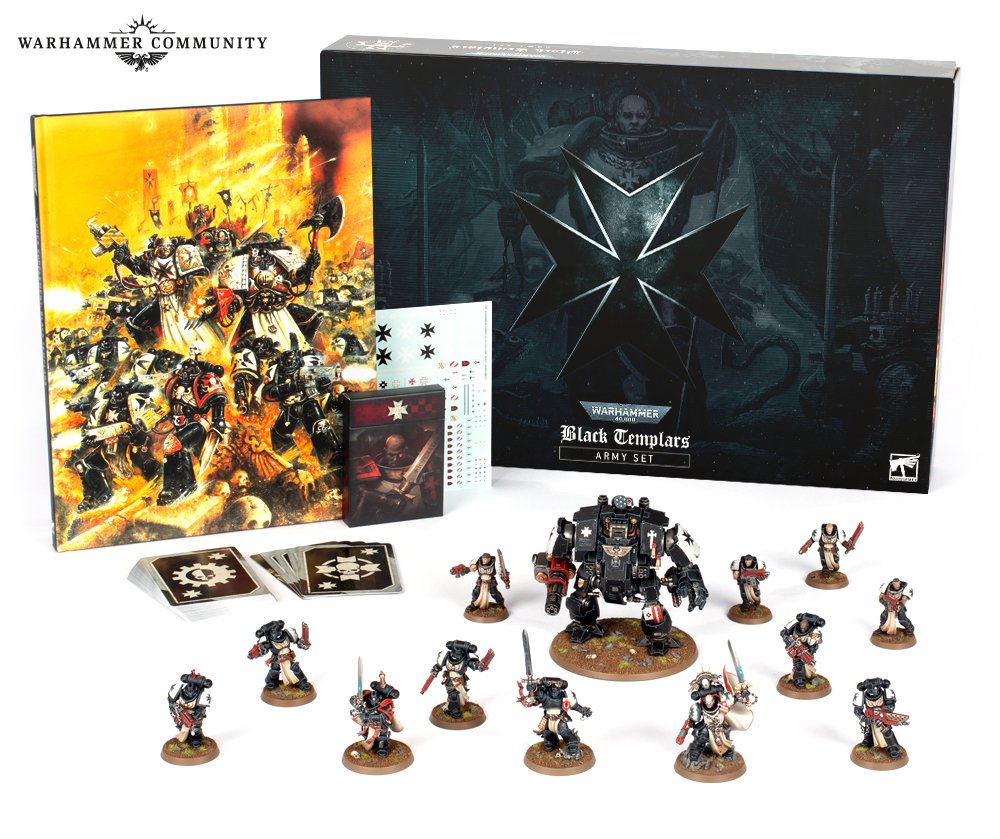 As Goonhammer’s resident Black Templars Guy, I was champing at the bit to get my zealous mits on the new Black Templars Army Set. Fortunately, Games Workshop was generous enough to hook Goonhammer up with a preview copy, and I was the lucky fella in our crew who got to review it. The minis in this box set are a Primaris Marshal, 10 Primaris Crusaders, a Redemptor Dreadnought, and The Emperor’s Champion. There’s also datacards, a lovely transfer sheet, and an exclusive Black Templars codex with the John Blanche artwork from 40k’s 3rd edition back in 1998. It’s less “army” and more “combat patrol” but I’m gonna break it down and share my unqualified/impassioned thoughts.

Marshal and The Emperor’s Champion

The Marshal goes together more or less how you would expect – he’s a modern GW plastic character kit, so it’s more or less just one pose for this guy. However, there’s a bit you can do to make him your own. His melee weapons attach at the forearm on his manacle, so you could easily shave the connecting part down to rotate that hand however you would like. It also means you can easily put the leftover melee weapon on a model elsewhere in your army that you want to give more Templar flare. His gun arm, however, has a totally flat standard join, so you could swap that out for any given Marine right arm you wanted. His head is on a standard Marine ball joint so you can easily do a head swap for a helmeted option from your bits box if so inclined. I gave mine the hand flamer, rebreather, and power axe options to recreate my old Templar captain, Siegward, but the crown, plasma pistol, and sword options are all lovely too. The tilting plate and “eh, it’s a livin!” skeleton on his backpack are fiddly, and I’d recommend painting the backpack separately to the rest of the model as it might make painting his cloak difficult. There’s also a little scroll to put on his back but I couldn’t see where it was meant to go and I left it off, as it would probably break anyway. The Marshal is a fun model to throw together, and he was a great way to get the ball rolling on this box.

As for The Emperor’s Champion, he only goes together one way, but he’s a beaut isn’t he? His sprue is far smaller than the Marshal’s with no options to speak of, but if you really wanted to use a different head or backpack on him it wouldn’t be a problem at all.

Before I finished writing this review, the Marshal model was practically calling to me to get a paintjob. I think that’s one of the best things I can say about any model, and he was a blast to paint, with a beautiful combination of textures and surfaces:

As far as I’m concerned, the real stars of the show here are the multipart Primaris Crusaders. There’s 10 dudes here, with 1 Sword Brother/Initiate, 5 Initiates, 4 Neophytes, and a bevvy of weapon and head options for the lot of them. The first thing you’ll notice on cracking open the box are that these sprues are dense. We’re talking depleted uranium density here. There’s a lot of pieces per model, but they fit together beautifully. Pieces are generally, but not always, near each other numerically which helps a lot, but you can spend a long time searching for that one bit. This can be a bit confusing as some builds require pieces from both sprues while others don’t, so hip plate 86 is only on each sprue once, but hip plate 76 is on each twice, and so on. Fortunately, bodies and their constituent pieces have numbers on the plastic. For example, this particular set of legs, torso, and so on all have a “3” somewhere that will be hidden once assembled

Plastic glue is a must for these guys. These are some of the tightest engineered plastic kits I’ve ever built, and the tiny gap that superglue adds could make things tough. They also have some frustratingly placed mold lines, often running into the difficult to scrape ribbing behind the knee and under the butt. You’ll want to scrape these, as a number of extremely clever little divots are placed just so to make pieces fit flush. That can be divots in kneepads for tabbards to fit in, or a sword arm having dents for torso detail to fit in. Building the bodies is a prescriptive process, but there’s flat enough joins that you could twist the torsos around and still be fine. The builds open up after that with flat arm joins that let you use whichever arms you want, and classic ball and socket heads so you can position the included heads or swap in your own easily. It is somewhat confusing to me that the Sword Brother is on a 40mm base while the other 2W 3+ dudes are on 32s, but that’s probably for parity with the standalone Primaris Sword Brethren. If you couldn’t tell from the sprue density and complexity, this is a kit with a learning curve. I won’t say “beginners need not apply” but you will probably want to have a few kits under your tabbard before cracking this set open.

After building your Crusaders, you’re gonna have a ton of bits left over to deck out more of your units and add some Templar flair to them. Depending how you build the Initiates, you could end up with enough leftover chainswords, power fists, and assault bolters to make some suitably choppy or shooty Intercessors. There’s also enough knightly accessories to dress up your tiny plastic spacemans however you’d like. Personally, a squad of Intercessors with auto bolt rifles and a power fist Sword Brother are next in my que. You’ll also end up with a spare cape that can be jammed on any ol’ Primaris body, meaning you can kitbash a suitably cool Sword Brother or Marshal.

I would also like to touch real quick on the kitbash potential of using these dudes as regular Intercessors or whatever, as I’m sure someone out there has had this idea. You certainly could do it, as the arms aren’t super prescriptive to the bodies and you can kind of build them however. The problem is what to do with the Neophytes afterwards. There’s no standalone rules for a squad of those chumps so you’d be stuck leaving them in the bits box or using them as a regular Scout squad. I’ll let you decide which is a worse fate.

This is the only previously available model in the box, and chances are if you’re a Space Marine player, you A. already own one and B. know how good a second one would be. Redemptors kick ass, and with a 5+ invulnerable save with Uphold the Honor of the Emperor, they should be a mainstay in most Templar lists. As for the model, it’s the same one you know and love from 8th edition, with all the options that entails. Chances are, you’ll have a couple leftover crusader seals you can stick on this bad boi to bring him up to speed with the rest of your Crusading jagoffs. It’s a great kit, with tons of posability and weapon options, and I’m happy to see it in here. Personally though, I think I’m gonna wait on that Templar accessory sprue they’ve previewed to really deck it out though.

The codex itself has been reviewed by myself and others, but if you haven’t read the rest of our coverage yet: it’s a certified banger. The blend of classic artwork and new pieces are beautiful, Maxime Corbeil’s Crusade force is downright aspirational, and the collector’s edition cover whips ass. For hams of a certain vintage such as myself, having that John Blanche artwork on the cover is super nostalgic. There’s a small art print as per usual, but it’s smaller than normal since this box doesn’t actually have that much plastic in it. The cards are handy and I’m happy to have them as well. Personally, I’m extremely excited to use the transfer sheet inside and deck out the Redemptor and the Indomitus models I have earmarked for this army. There’s some great crusade badges, bits of heraldry, and big honkin Templar crosses to dress up your vehicles and big models in here. What really excites me is the Templar crosses in red so you can make Sword Brethren for your regular squads. There wasn’t a red cross before so you’d have to freehand the marking on your sergeants if you didn’t have sculpted shoulder pads. That probably only matters to heraldry nuts like me, but I’m happy to see it.

I wish the set came with the previewed upgrade sprue so I could make these guys even cooler and doll up my Impulsor but there’s a lot here to begin with. The quality of the models should be readily apparent from the pictures here, painted or not. I found myself routinely going “oh that’s clever!” while fitting the bodies of the models together, and the layered detail on them is pretty immaculate. The Crusader kit is let down by some fairly stiff posing options on the Neophytes, but for a couple bullet catchers I’ll let it slide. The power armored Initiates wow me just as much now as the original plastic Crusaders did back in 2005, and the glow-up the characters got is good enough to smooth over any lingering pain about my old Emperor’s Champion no longer seeing the tabletop. What we’re seeing here is sculpting technology fully catching up to what GW’s concept artists were drawing back in the day, on better proportioned and more crisply sculpted models than were possible at the time. If I didn’t already have a Templar army, this would have been the box to start it.