With a new batch of rules updates comes the need to revisit the strategies and tactics of each faction. Today we’re joined by Jack Harpster from the Art of War, and he’ll be talking about Blood Angels.

Welcome to a new year and a new system as both 2023 and Arks of Omen are upon us! Following in the footsteps of last year’s WarZone: Nephilim, the new Arks of Omen mission pack again brings dramatic changes to the 40k metagame with new army construction rules and mission secondary updates. Along with Arks of Omens, the simultaneous release of the 2023 Munitorum Field Manual and 2023 Q1 Dataslate adds further complexity to the rapidly evolving landscape. To help make sense of it all our team has been working hard on a new series of Faction Focus articles!

Blood Angels are probably my favorite army and consensus the current best Marine army.  With all of the changes brought on by the Balance Dataslate, the Munitorum Field Manual and new War Zone pack it’s time to review the changes and see where the Sons of Sanguinius end up. 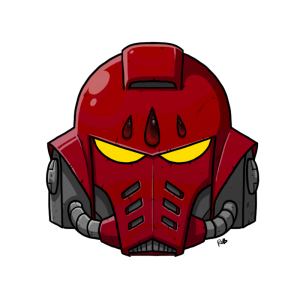 Armor of Contempt has been completely removed from Warhammer 40,000. This will probably end up being the most impactful change Blood Angels take this update cycle.  While the other marine armies are also losing Armor of Contempt, many of them can pivot back to using storm shields or by becoming overwhelming shooting armies designed to not have to take significant return fire; the same reasons that made Blood Angels the biggest beneficiary of Armor of Contempt also make them the biggest loser when it is taken away.   The Blood Angels’ unique combat units didn’t have storm shields anyway and had access to a high enough AP to barely notice opposing Armour of Contempt units. Losing AoC is a serious hit to Blood Angels’ survivability and not to skip ahead but I’m not sure all the buffs they receive are enough to counteract that.

As with most Space Marine chapters, the Blood Angels received a broad swathe of points drops and free wargear. This does weird things to the standard jump pack rushdown list; Sanguinary Guard receive free Power Fists, Death Company get slightly more expensive but get cheaper Power Fists, Thunder Hammers and free Power Weapons and both of them get free pistol upgrades. This leads to every Blood Angel list sprouting 40+ Inferno Pistols overnight as every Sanguinary Guard and Death Company model can swap their ranged weapon for a free sawn-off meltagun. It’s probably a mix of Power Fists and Axes for Sanguinary Guard from here on out, though I can see a world where you take only Fists.  Death Company seem very spammable at 23 points for a Power Axe and Inferno Pistol with maybe a 5 man Hammer squad thrown in to keep people honest early with Forlorn Fury.

Mephiston is another big winner here; he was pushing the edge of being a unit you could include at 140 but at 125 and with the extra HQ slot in the Arks detachment he feels quite good. There are other minor points drops and Seth dropped 15 points but the last major BA-specific change is to the humble Baal Predator. Previously, this tank was 110 points with nothing but the fairly lackluster flamestorm cannon; now its optional and quite expensive upgrades are free. A Baal Predator can take a Twin Assault Cannon, two Heavy Bolters, a Storm Bolter and a Hunter Killer Missile all for free. That’s a lean, mean, infantry-killing machine that would previously run you 160pts and now is just 110. I feel quite a bit better about losing the anti-infantry firepower from the Sanguinary Guard’s Angelus Boltguns if I know I have two or three of these running around being obnoxious and going brrrt brrrt at any infantry too worthless to commit expensive melee units to. I’ve always wanted to run Baal Predators and have always been stopped by their complete worthlessness, but now that may no longer be the case and I’m excited to live in that reality.

A new change to the balance dataslate is that if a Space Marine Troops unit controls an objective in your Command phase, then you continue to hold that objective even if no models are in range as long as your opponent doesn’t take control back from you. This mirrors certain objectives in Data Scry-Salvage and Death and Zeal. This should be a nice change to Space Marine troops and a good combo with them going down in points. With the limited slots of the new Arks of Omen detachment, a squad or two of Incursors or Infiltrators will probably make it into most lists as a way to stop the opponent from infiltrating or making effective pre-game moves units while being able to hold forward objectives early. They’ll also do a better job than ever before.

Space Marines are no longer required to progress forward in the Doctrine order, similar to the 8th edition marine book’s rules at launch. This massively buffs Iron Hands and other armies that want to start and end the game in Devastator Doctrine, gives a decent buff to those like Ultramarines who wish to get to and stay in Tactical Doctrine and provides no benefit to armies like Blood Angels wishing to get to Assault Doctrine as quickly as possible. However, it may open up a new archetype for Blood Angels that revolves around a Shooting core that stays in Devastator while using Blood Angels’ naturally good doctrine manipulation to put one to three combat units per turn into Assault. That build is purely theoretical but could have legs given Blood Angels’ status right now as the only Marine army with good fast combat units after the general points nerfs to Vanguard Veterans that White Scars and Space Wolves relied on.

The Blood Angels’ secondary game has changed quite a bit. Death From Above and Fury of the Lost were both removed but Oaths of Moment was reverted to it’s previous, unnerfed state.  This is a net negative for the army and does shut out several of the cooler ways that Blood Angel players had to work with for scoring points. The army feels built around Raise the Banners, Oath of Moment, and either Shock Tactics or Relentless Assault, although I do like taking Mephiston for Warp Ritual. Being able to control the center and giving my opponent the choice between losing on points or pushing me and getting tabled is my favorite way to play the army but aggressive players will still be able to put together a coherent scoring plan. Overall, Blood Angels’ secondaries land at a decent place but are probably a bit worse than before.

The biggest change for every army will be navigating the landscape changing around them as the metagame shifts. In broad strokes, almost every army caught a nerf of some kind so it’s hard to evaluate the overall meta with 100% accuracy but on first glance it seems like vehicle-based armies are on the rise. Knights and Chaos Knights have changed very little (and the new secondaries favor them), Votann are still good at shooting and Iron Hands and Ravenwing getting juiced means vehicles and shooting is back on the menu.  Free Inferno Pistols helps quite a lot there and generally staying out of the vehicle shooting fiesta is probably for the best. In this meta Blood Angels can carve themselves a little niche as a fast combat army with way more melta than is probably healthy and will probably wind up as an army with a solid 50% win rate.

With that said, it’s time to build a list.

+Agent of the Imperium+

This list packs all the jump pack goodness of the previous Blood Angel lists but with added melta.  A surprise 38 Inferno Pistols is sure to make vehicle armies tremble alongside the powerful combat the units still have.  Move to the center of the board and few armies will feel comfortable challenging you.  The Voidsmen hold your home objective on the cheap while Infiltrators start in mid board and run around being obnoxious screens and stickying objectives left and right.  The Baal Predators bring up the rear clearing out any small units too worthless to commit a jump pack squad to.

Someone has to shoot the ten guardsmen standing on an objective, might as well be the Baals.  This list feels like a good place to start going into the new year, and I anticipate that the Blood Angel meta will change and new things will be discovered.  There is a possible list where you go heavy on Devastator Doctrine and rely on your Sanguinary Priest to give one to two units Assault Doctrine each turn.  There’s plenty of room to experiment with units that got much cheaper like Inceptors, Aggressors, Sternguard and the like.  I’m excited to experiment with those lists and see what the future holds.

That wraps up our look at the Blood Angels but we’ll be back in a couple of days iwth more great coverage of the changes in Arks of Omen. You can see more of Jack Harpster’s armies and tactics in action by checking out the Art of War on YouTube or in the War Room, where they post regular video battle reports and stream games.