Hammer of Math: Acts of Faith

Tis the season, so this week’s Hammer of Math will cover one of the defining features of the Adepta Sororitas: Miracle dice and Acts of Faith. Special thanks to reader Tim Pinney for providing some much needed insight with this article.

Along with some of the nicest models in the 40k range, the release of the Sisters of Battle brought about a fascinating rule in the form of Acts of Faith. During the course of the game the player generates Miracle dice in various ways. Every time a Miracle dice is gained, the player rolls a d6 and keeps track of the result. The Miracle dice are kept in a pool to be used later on.

Once per phase the player can perform an Act of Faith to apply one result from the Miracle dice pool to a particular die roll. No roll is made, instead the Miracle dice becomes the result of that particular roll. The result cannot be replaced by a re-roll (so if e.g. you used one dice for a charge and rolled the other, a subsequent re-roll would only change the second dice, unlike what normally happens). This process is called a Miracle dice substitution, and can be performed on a limited number of rolls:

This ability can be further enhanced by several units, abilities, and Stratagems. One notable unit is the Triumph of Saint Katherine, an actual funeral procession marching solemnly through the battlefield while bolter fire and flamer blasts fill the air. This unit contains several relics which impact Miracle dice, notably the Censer of the Sacred Rose which generates an additional Miracle dice at the beginning of each turn (yours and your opponent’s) and the Icon of the Valorous Heart which allows an additional Act of Faith to be performed. The Simulacrum of the Argent Shroud allows you to increase or decrease the value of one Miracle dice used by 1 before its use, to a maximum of 6 and a minimum of 1. This effect is identical to the Dialogus and her Stirring Rhetoric ability. Additionally, units with access to a Simulacrum Imperialis can have an Act of Faith performed on them even if another has already been performed. Units of Repentia also generate a Miracle dice when destroyed with their Martyrdom special rule, unless it was in the Morale phase.

All told there is an awful lot going on here – it’s an entire sub-system in itself, unique to the army and surprisingly complex to get a handle on when you start playing (or playing against) Sisters.

The Math of Faith

The phase-based limitation on Acts of Faith primarily affects the hit roll, wound roll, and damage dealt by an attack. Before each roll the player must decide which value to affect, and in the case of the Order of the Ebon Chalice whether or not it’s worth sacrificing an additional Miracle dice to ensure a result of a 6. As we’re well aware of by now the basic 40K roll is divided into gatekeeper rolls (hit, wound, save, FNP) and driving rolls (damage, attacks). In the case of an attack against a particular target the question becomes whether or not there’s a situation in which it is better to substitute a gatekeeper roll instead of a driver roll. For example let’s say you have a Retributor Squad firing a multi-melta at a T9 target. The Retributor Superior is armed with a combi-flamer so that Holy Trinity (1 CP) is activated to provide +1 to wound, and Storm of Retribution (2 CP) is activated to add 12” to the Range characteristic of the multi-melta and 1 to the damage roll. As a result the attack hits on a 3+, wounds on a 4+, and will deal 1d6+3 damage. Which rolls do you substitute?

To solve this problem we look at it from an expected value perspective.

Our goal is to find out which solution will improve the expected damage the most; eliminating the probability associated with a particular roll or improving the damage relative to the average value? To do this we take the damage value provided by the Miracle dice result, divide it by the average damage inflicted, and take the inverse of that value. The result is the maximum probability that we would want to disregard before it’s better to improve the damage. Note that when looking at a Hit and Wound roll we always want to substitute the roll with the lowest probability, as that will have the greatest impact.

The resulting probabilities are found in the chart below.

Note that for values that are less than the average roll it’s never advantageous to substitute a Miracle dice for a damage roll (unless the target is at low health and your goal is to guarantee a kill). For higher values the substitution target depends on the value of the Miracle dice as well as the probability of success. The chart below takes the percentages from the calculations and converts them into d6 target numbers.

Multiple Acts and Faith and Fury

The Faith and Fury (2 CP) Stratagem effectively applies two dice, but it can only work on a sequential hit and wound roll. The chart below provides the cumulative probabilities of a pair of hit and wound rolls, which can then be applied to the probability chart to see if the approach is better than substituting the damage roll. In general it is, as even a pair of 2+ rolls is equivalent to a single 3+ roll in terms of probability of success. The high cost of Faith and Fury makes it preferable for final strikes against wounded targets; for the cost of 2 CP you can guarantee that a particular attack hits and wounds the target. If you have access to a second Act of Faith (for example by using the Triumph’s ability) then you can even guarantee the damage roll. 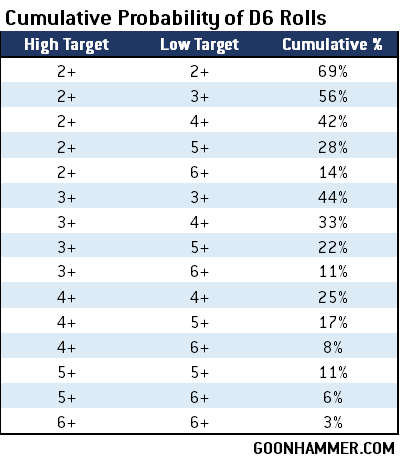 Normally players declare their attacks and fast roll all identical attacks simultaneously. It’s easy and convenient, and when the rolls are independent of one another the impact is minimal. In the case of Acts of Faith it’s also less than optimal due to the possibility of wasting or misusing Miracle dice. As the number of wounds on the target decreases it may be advantageous to change your strategy to maximize your chances of killing the target. Because the decision to use a Miracle dice occurs immediately before the roll, you may want to hold off on using them if the target is already dead or sufficiently weak. To accommodate this you can use the following process:

Probability of Kill: When to Ignore the Chart

The strategies above are intended to maximize the statistical advantage of using Miracle dice in situations where your options are limited. The exception is when the target has fewer wounds than the damage capability of the attack, and you’re now looking at whether or not a particular attack will kill a target instead of just maximizing damage. In that situation you can treat the damage roll as its own gatekeeper, with the probability being the chance that the damage inflicted is greater than the wounds remaining on the target. In that situation you would want to substitute whatever value will maximize the probability of killing the target.

For example if I have a weapon that deals 1d6 damage and the target has 6 wounds left, I have a 17% chance of killing it. If my hit roll is a 4+ and my Miracle dice is a 6 I would still want to substitute the damage roll instead of the hit roll even though the chart says I will deal more damage by replacing the hit roll. This is because my goal is now to kill the target, and not just deal the most amount of damage possible. This is also a good example of why you would want to save your Miracle dice for the last attacks in the sequence.

Acts of Faith are a fascinating part of the Adepta Sororitas, and offer a unique and fun way to change the tide of battle. When properly applied they can turn the tide of battle, removing uncertainty. Definitely a cool ability for an awesome army.

Finally thanks again to Tim Pinney for his insight and suggestions with this article. Tim is a member of Team Brohammer and is a frequent guest on the Sister Act Podcast.