Hammer of Math: Razorflails, Competitive Edge, and the Joys of Massed Attacks

This week’s Hammer of Math takes a look at the delightfully broken synergies available to Drukhari Succubi thanks to the Book of Rust.

One of my favorite things to write in Hammer of Math is about the more absurd combinations that result in dramatically out-of-balance effects. Whether it’s the amazing durability of the fabled Iron Hands Leviathan or the incredible offensive firepower of Wolf Lord Wolfsmash Smashwolf the 2nd who had a 99% chance of killing a Knight in a single turn, sometimes things just synergize in hilarious ways. This week we have another potential combination, courtesy of the new Codex: Drukhari and the supplemental rules of War Zone Charadon: The Book of Rust. The particular arrangement uses a Succubus equipped with Razorflails and the Competitive Edge. The Succubus starts with 6 attacks at WS 2+ and S3. Selecting Adrenalight for your Combat Drugs ability makes that 7 attacks. Blade Artists makes every unmodified wound roll of 6 improve AP by 1. Razorflails have a baseline value of Strength: User, AP -1, and deal 1 point of damage but the player makes 2 hit rolls for every attack instead of 1.

Where things get fun is that with the Competitive Edge Warlord Trait from the Book of Rust, every attack that does not reach the Inflict Damage step of the attack sequence allows the fighter to make an additional attack…  which then gets 2 hit rolls if its made with Razorflails. Add in the Dark Lotus Toxin Relic to boost Strength and Damage by 1 on all the bearer’s melee attacks and the Art of the Kill Stratagem for 2CP to re-roll wound rolls and you have a very unpleasant combination. For additional (but extremely expensive) shenanigans you can use The Blade Well Placed for 2CP to add 1 to your attacks’ AP and Hyperstimm Backlash for 2 CP to get another attack. Finally you might as well spend 15 points for Show Stealer so the model can run all over the place with an extra 3″ consolidation move that doesn’t have to finish closer to the enemy. Assuming you only use Art of the Kill you’re looking at 14 WS 2+, S4 (re-roll wounds), AP -1 (-2 on 6), D2 attacks in which every attack which fails to deal damage results in two more attempts to make. While there are some arguments against this interpretation, the consensus over here at the Goonhammer Brain Trust is that the “double twice” effect is the correct interpretation. So what does this mean?

I decided to pit this 70 point model up against a few Lords of War to take a close look at the potential for absurdity. For starters we’ll look at Guilliman, who historically has not fared well against various threats and has already been publicly humiliated. We’ll also toss in his vastly more survivable brother Mortarion and our old faithful the Imperial Knight. Magnus is also a fun addition when you include Glamour of Tzeentch to reduce hit rolls by 1 and Weaver of Fates to make his invulnerable save a 3+. Because the attacks are only S4 this is also a good opportunity to examine which combat drug is superior; while normally adding +1A is the obvious choice the sheer volume of attacks that the model already has combined with the low chance to wound makes using a modifier an appealing alternative. 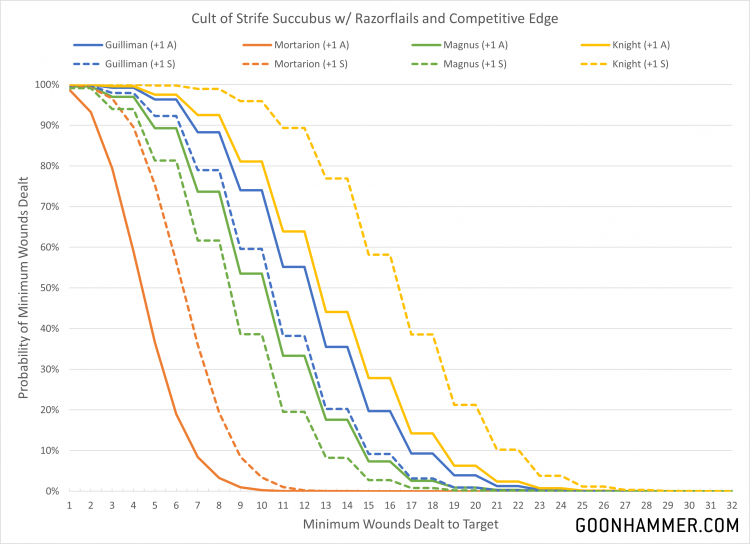 Sure enough we see that Guilliman continues to be the laughingstock of the Primarchs, with the Succubus slaughtering him 60% of the time at worst and 74% of the time if the +1A drug is chosen. Mortarion continues to be a nasty piece of work thanks to the combination of damage reduction, feel no pain allowing wounds to be ignored without triggering additional attacks, and just being damn tough. Magnus is almost as difficult to kill with his powers active. The Knight curves are a good example of how boosting the wound roll is advantageous when the numbers are so low; with a +1S getting the Succubus to a 5+ to wound the unit has a 4% chance of dealing enough damage to kill the model in one turn. If she survives then she’s almost guaranteed to kill the Knight in the next turn (though she can also potentially consolidate away before the knight has a chance to fight, if she prefers). This is considerably more effective than the combination of Precision Blows and the Tryptarch Whip that I covered previously. It’s a good thing that the Drukhari don’t have the option to take two Warlord traits; the combination of Precision Blows and Competitive Edge would be absurd.

Given the potency of the Succubus against elite units, how well could they clear out brawler units like Deathwing and Blightlord Terminators? What about Intercessors or a massive horde unit like an Ork mob? The objective-based nature of 9th Edition places a significant priority on taking out these units quickly and decisively, and as we see in the chart below the Succubus does a phenomenal job of getting her points back against most targets. As before we’re using Art of the Kill to re-roll wounds. Blightlord Terminators remain particularly hard to kill thanks to Disgustingly Resilient cutting the damage in half, while Intercessors are just demolished thanks to the combination of perfect damage profile and massive number of attacks. In its current form this particular combination is effective against a wide variety of targets. 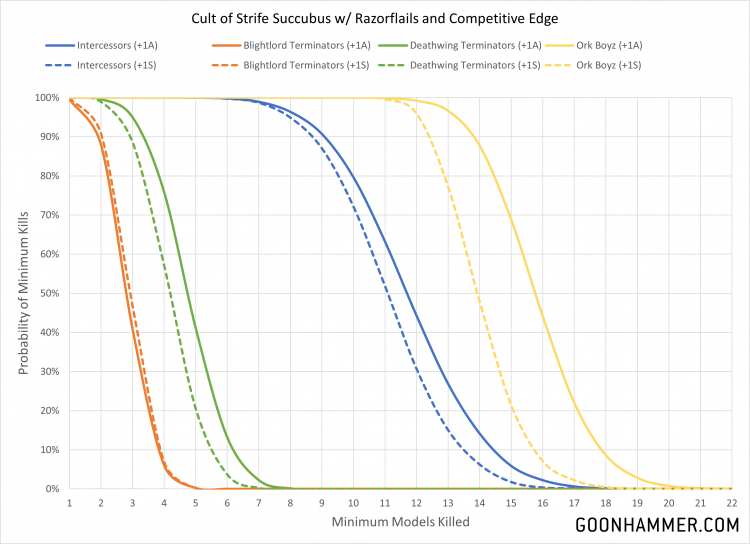 As unpleasant as the combination of Competitive Edge and razorflails is, it’s likely that at some point Games Workshop might reign in a single model making as many as 42 attacks. In light of that it’s worth looking at how Competitive Edge interacts with other weapons, notably the Triptych Whip (just not against VEHICLES or TITANIC units) and the Glaive Exquisite assuming the target is Ld 8+. With Art of the Kill to re-roll wounds we see that several of the options remain fairly viable, particularly the whip thanks to the combination of a 2+ to wound and 10 attacks. 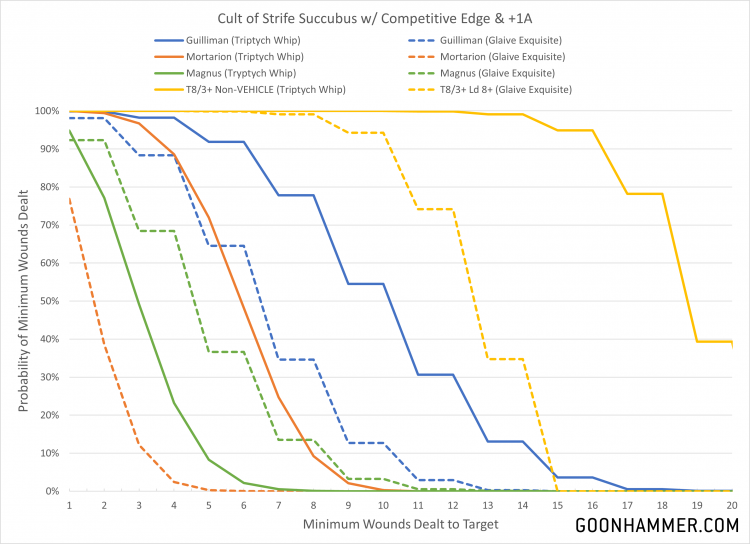 That’s A Lot of Damage

I suspect that eventually GW will nerf the combination of razorflails and Competitive Edge so that the offensive output of the model is actually close to its points value. The sheer volume of attacks makes it a threat against nearly anything, but the efficacy falters significantly when facing high toughness threats or damage reduction effects. Fortunately even if GW does make a change, something like the Triptych Whip is still pretty nasty.