Scratching Your Warhammer Itch Digitally: A Survey of Methods 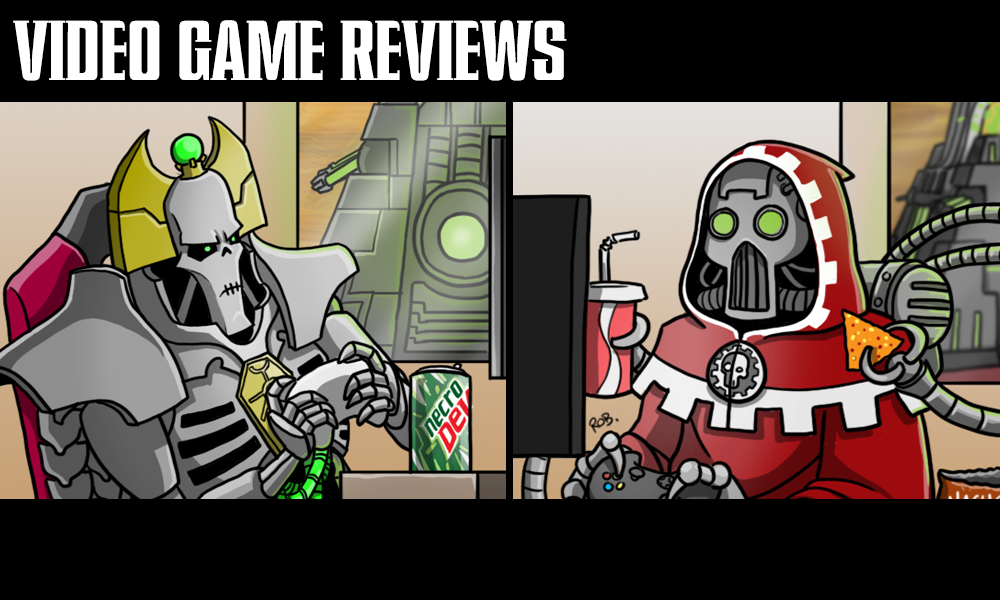 We’ve talked quite a bit about the impacts of the Coronavirus on the hobby over the last couple of weeks, from preventative measures that needed to be taken for public safety purposes to board games you can play with the family while cooped up indoors. But while the isolation has given us lots of hobby time to work with, many of us have found ourselves pining for that Warhammer-specific action. So if you’re looking for digital facsimiles of the Warhammer experience, we’ve got you covered with a go-to guide of everything out there. Or like, most of the things. Okay, several things that we wanted to write about.

Believe it or not, Games Workshop used to be really tight about licensing out its properties. Which was weird because most of the companies they licensed them to were sketchy and the games they produced were bad. Until Dawn of War, anyways. Let’s start there. 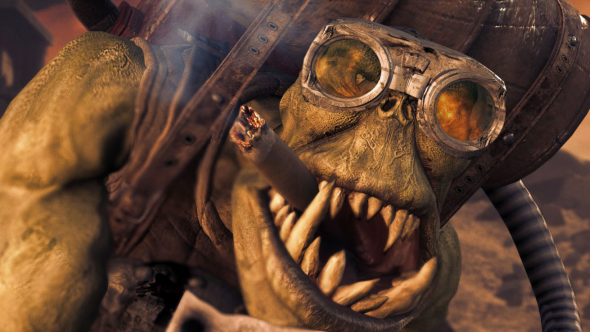 If you want a top-down view of little mans from the Warhammer 40,000 living and dying at your command and clashing with other 40k armies, this may be as close as a video game experience will get you. There are three Dawn of War games, plus a few expansions.

Dawn of War I

The original, and still the best of the three once you add in the Winter Assault and Dark Crusade expansions. Some people think that Dawn of War 2 is better. They are wrong. There’s a reason Deathray Designs started its business making MDF versions of the Dawn of War buildings and that reason is that they own. There’s so much that this game – the first really good mainstream 40k video game – did so well that many elements from it have made their way into the main game proper. The Blood Ravens are a cool chapter and the Dark Crusade campaign is legitimately brilliant. The Soulstorm expansion is an unbalanced mess, but it adds two more factions and is also fun to play. And the mods rabbit hole on this one goes very deep. It’s cheap and easy to get several people set up with this and ready to play online.

The sequel to the fantastic Dawn of War, the second game has a stronger narrative, better graphics, and a more usable UI but trades the large-scale army combat, build mechanics, and territory control for something more squad-based, bringing the scale of battles down a bit. It’s still a great game and was seeing regular updates for a while, with the multiplayer arena mode The Last Stand adding some interesting variety and a few races who weren’t part of the main game. It’s a fun experience but in my opinion it works better as a single player game than a multiplayer outing.

Look how they massacred my boy. Dawn of War 3 drops most of the depth and detail that its predecessors had, there are only three factions you can play as, and none of them are Chaos. Also it’s weirdly very ugly for no reason. You can skip this one. 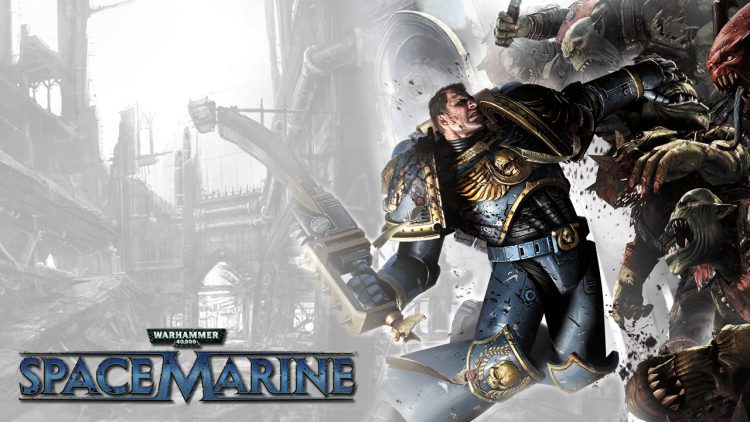 This game whips ass. Hell, the Goonhammer crew still play it every couple of weeks, hopping on to talk shit and clown each other regularly. Space Marine has you taking on the role of an Ultramarines captain during the Ork invasion of an Imperial world, and as usual, everyone ends up fighting against Chaos in the end. The game’s campaign is very solid but it really shines in the multiplayer, where both the horde mode and standard multiplayer can be a real blast if you have a few friends to play with. Also dreadnought mode is hilarious when you have a full server. 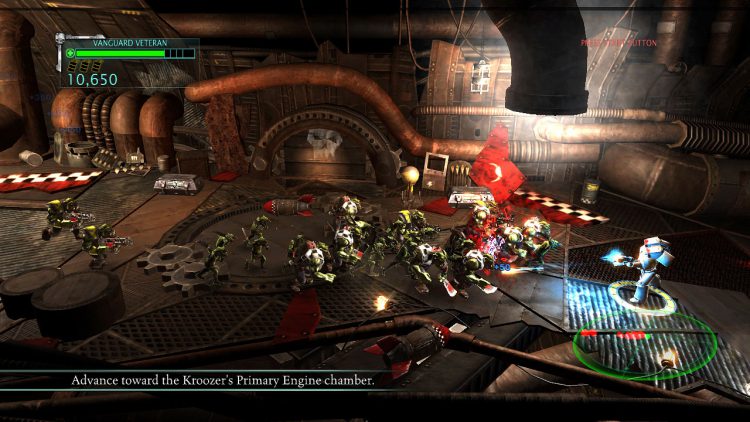 An odd companion game for Warhammer 40,000: Space Marine, Kill Team has no relation to the tabletop skirmish game but instead is more like Gauntlet, but in the 40k universe. It has players take on the role of marines assaulting an Ork space hulk and it’s wall-to-wall action. It’s not very long, but it is a lot of fun to play and the game play varies enough as you fight through wave after wave of orks (and other, surprise antagonists who are actually not chaos). It’s worth an afternoon, at the very least. 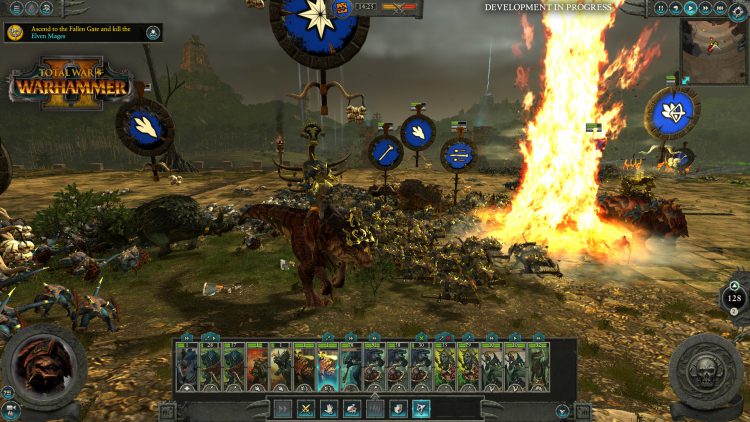 After the Old World died, the first major Warhammer Fantasy video game released, reminding everyone why the Old World was pretty neat, actually. Warhammer Total War is a Total War game that incorporates many of the Warhammer Fantasy factions we’ve come to know and love, with sweeping campaigns for each as they put their designated rivals to the sword and conquer a segment of the world. The sequel adds a load of new playable factions and a new campaign that sees armies fighting over a Chaos macguffin called the Vortex, and players who own both games get access to a larger sandbox-style campaign that incorporates content from both games. Make no mistake, this game is great and the content and gameplay are as deep as they come. If you’re into the Total War-style combat and are looking for a game that may literally cost you hundreds of hours over the next few weeks, this is a great hole to fall into. It’s also the closest you’re ever going to get to a completely faithful WHFB video game and is probably single-handedly responsible for GW deciding to go back to the Old World. 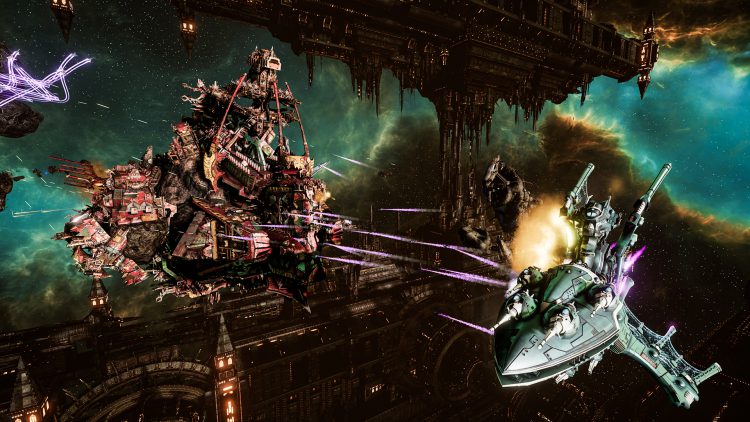 A wonderful translation of the space combat game into digital format, BFG:A 2 improves on its predecessor in many ways and involves pretty much all of the game’s factions, including a few that aren’t really in 40k, like Tau allies. The game’s focus on positioning and maneuvering really help it feel like the tabletop game that spawned it, and it makes the translation to digital well. Single player mode is a bit more forgiving, with the ability to pause mid-game and make decisions, but players who want to take it further will find a punishingly competitive multiplayer scene online to interact with. 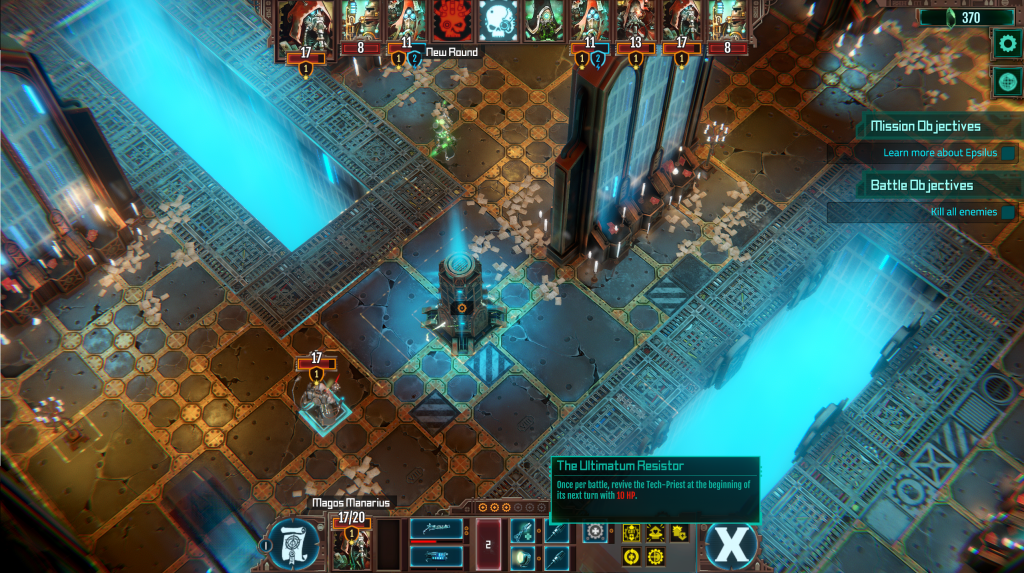 Mechanicus is the first 40k game to focus squarely on the Adeptus Mechanicus, and although it’s a budget title, it’s got a solid campaign and a surprising amount of depth. It’s a turn-based title that borrows a lot from XCOM, seeing players manage attrition over the course of a campaign to claim some Necron technology. The Heretek expansion bolts onto the main campaign and is worth picking up if you’re getting into Mechanicus for the first time. Together, the two feel like a full game, although the expansion can introduce some game balance issues. 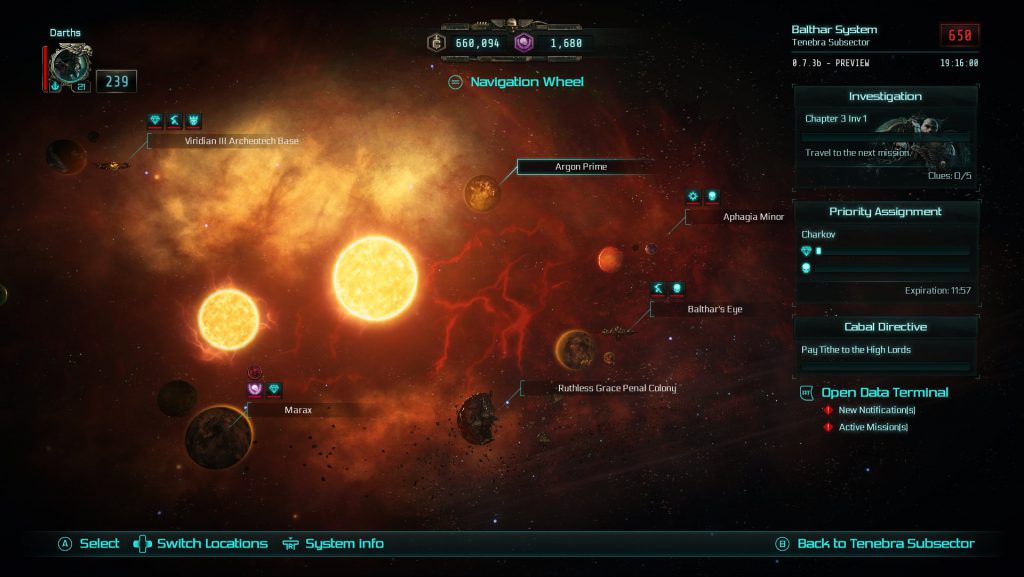 One of the more recent 40k video game releases, this action RPG puts players in the role of an Inquisitor of the flavor of their choice and sees them hacking and slashing their way through a large campaign with lots of smaller quests and hooks. It’s not the strongest outing for 40k video games and lacks polish, but it does offer a pretty full experience and is worth a look if you can get it on sale.

These are games that aren’t set in any Warhammer universe, but might still scratch that itch for tactical warfare. The big ones we’re going to talk about are XCOM, which are just very good games. 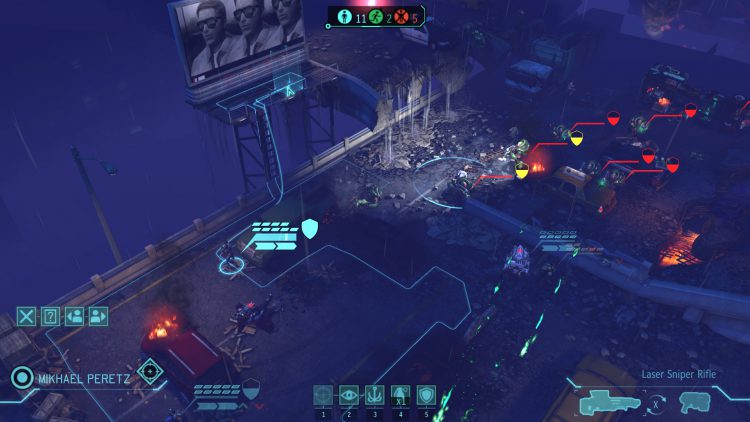 If you’re a big fan of the tactical squad-based mechanics of Dawn of War 2 and the attrition management of Mechanicus, chances are you’ll like and/or have already played XCOM, which does both of those things very well.

That Gobbo: The original! Protect Earth from invading aliens by building secret military bases and intercepting alien ships! Take control of your gaggle of idiot rookies who will die in a multitude of horrific ways, including being turned into a zombie from which a xenomorph tears itself out of! Use the aliens’ weaponry against them and accidentally blow up your plane full of soldiers with a Blaster Launcher! Go play it, it’s still good as hell!!!!!! 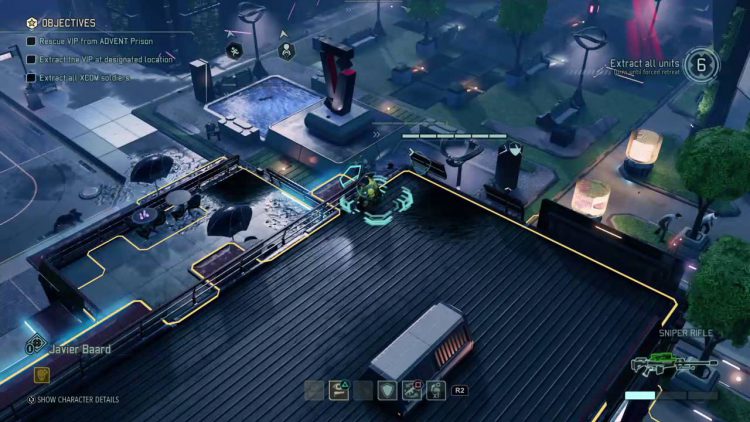 Condit: XCOM 2 takes the same game play you know and love from 2012’s XCOM: Enemy Unknown, cranks all the dials to 11, then installs a few new dials that run to 12 and cranks those to 13. Nearly all of the missions are on a timer now, lending a sense of urgency to even the most mundane tasks, and familiar enemies are back with new tricks: the once-humble Sectoid is now a serious threat from the first time you see one, and the more dangerous alien bioforms are deadlier than ever before. And on top of all of that, rather than coordinating the world’s military resources to fend off an alien invasion, you’re leading a ragtag resistance to try and liberate a humanity that generally neither knows about your fight nor cares to contribute. Don’t expect this to be easy. XCOM 2 offers interesting tactical battles tied together with an overarching campaign that regularly presents you with decision points where there’s no right answer, but there are plenty of wrong ones. Couple this with a tense race against time to prevent the alien menace from completing their master plan and a trio of powerful enemies who’ll hunt your mobile base around the globe and you’re in for an uphill battle if you’re going to liberate humanity. XCOM 2 hits a lot of the same notes as some of the more narrative-minded skirmish games on offer, letting you follow a team of tough-as-nails soldiers as they struggle against all odds to save the world and the lives of everyone on it. If you’re hankering for a solid campaign with just enough story beats to keep you interested, XCOM 2 might be for you. 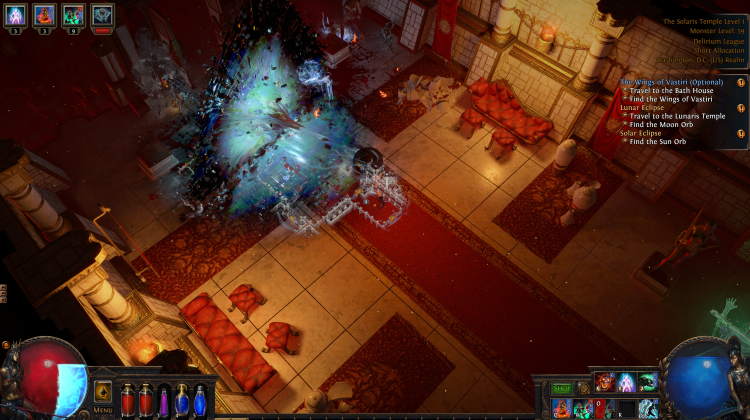 Chelsea vs. Mirror Chelsea in the Delirium League.

If Inquisitor – Martyr leaves you hungry for a better action RPG, then you won’t find better these days than Path of Exile, which perfects the gameplay experience originated in Diablo and surpasses it. The game gives you loads of options for how to build your characters and offers a grim story about a greedy empire exploiting the people it conquers. The game is still constantly growing and adding new content, making it a fresh (and better) experience over and over. 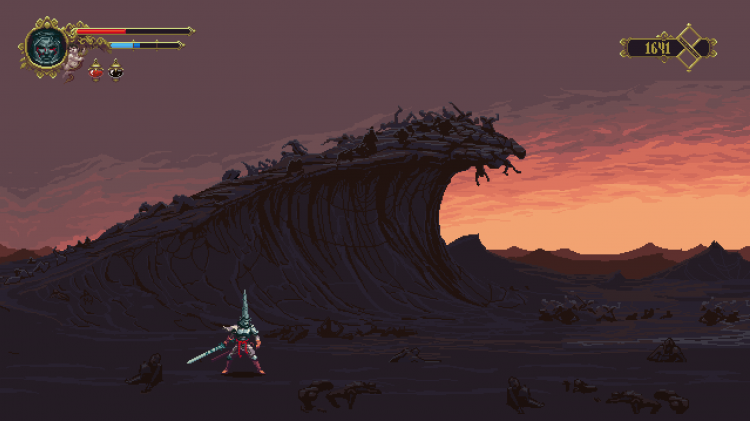 If what you really want is the grim religious zealotry, warping influence of Chaos, and the horrifying mutants of the 41st millennium, then this Dark Souls-like 2D platformer will be right up your alley. You take on the role of The Penitent One in a land cursed by what has been called “The Grievous Miracle,” a mysterious warping force that the people of the land have deified and set to worship. The game has compelling combat and an absolutely fascinating lore that’s very reminiscent of 40k in its visual styling and emphasis on penance.

Got any other games to suggest that we might have missed? Think we were off base with one of our reviews? Just want to talk about sick strategies for clowning people online in these? Drop us a note in the comments below. Or if you have any questions, shoot us an email at contact@goonhammer.com.