Welcome, Fallen Nobles, to a primer on Chaos Knights! The latest chaos codex of 9th edition is finally here – or at least the boxed set special edition version of it – and apparently sold out immediately. If you’re one of the lost and damned souls who just purchased these spiky new models, read on! John Lennon here, and today I’ll be breaking down how to get on board with Chaos Knights and get the most out of the new book.

Chaos Knights are set to be my first Chaos army in over a decade, and I’m extremely excited to branch out the armies I play and to paint way too many big robots. Whenever I start a project like this I start by finding out the the army’s identity – who are the Chaos Knights?

Whenever an army has a defined strength in melee combat, you need to decide how you want to supplement that in list design – When choosing houses, deciding between Infernal and Iconoclast, do you want to supplement a strong melee presence with shooting, or tricks? Or do you want to throw “balance” out the window and punch so hard that your opponent flinches? I’m warming myself up to play an all-out aggressive list, but I still personally favor acting in multiple phases, so I am leaning into a list that at least pretends it can shoot the enemy.

Infernal and Iconoclast houses provide a difficult decision for a budding chaos knight player. Iconoclast houses just punch well, receiving a blanket +1 attack and AP in the first round of combat, while infernal houses can take mortals for buffs each turn. Just on this level, I prefer the iconoclast bonus by a wide margin. The iconoclast buff takes every melee model to another level, and helps counter the recent Armor of Contempt buff that might otherwise blunt our combat. Also, from past experience with Infernal houses in the old book, taking mortal wounds can quickly add up to an army that runs out of steam when it can’t land an early knockout blow. The flipside of this is that the named Infernal houses are far superior to the Iconoclast choices! Still, I think that the best choices here are going to be mixing melee and shooting buffs to create a high-damage blender so with that in mind, I’m starting off with the Bold Tyrants Iconoclast Fell Bond:

Bold Tyrants – Each time a model with this Fell Bond makes a ranged attack, if the target of that attack is within 18″ of this model, improve the AP of that attack by 1.

My honorable mentions here are Frenzied Invaders for iconoclast (score an additional hit on unmodified 6s to hit in melee), or the Infernal Houses of Korvax and Vextrix. 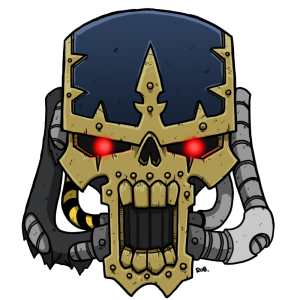 With that out of the way, let’s get a list down!

I’ve loaded up on defense for my two big boys. The Abominant has a disdain for re-rolls thanks to Blessings of the Dark master, and will potentially have a 5+ to ignore wounds taken while the Psychic Power Winds of the Warp is active. The Desecrator, meanwhile, will always have a 4+ invulnerable save against shooting attacks and has a 5+ to ignore mortal wounds built-in. Plus, as a knight of Nurgle, when he takes serious damage he can use his top profile for a few command points! From that point on, it’s all about War Dogs shooting you point blank while taking away objectives and charging the survivors. The War Dog Executioner (Helverin) is my concession to backfield objectives, but every other model here is expected to surge forward and tapdance all over my opponents’ primary score. Six Avenger cannons with AP-3 – potentially rerolling 1s to hit and wound if I manage my auras – will put a shocking number of damage 1 wounds downfield, and is enough to finish off any vehicles that get wounded by the other guns in my Knight lance.

Chaos Knights received a strong boost to their secondary potential, but it should be noted that the army can still be a little unreliable if your opponent is planning to deny secondaries with their list construction. Stranglehold is always valuable, and Grind them Down is a staple of Knights. The third secondary is more challenging, but fortunately the new Codex introduced a pair of strong secondaries that can really help round this out.

Still, I  think that a tight game for Knights isn’t likely to finish as a high-scoring game. A strong Knights list is going to be built around either tabling the opponent or tanking their primary score and then having a strong enough secondary plan that the enemy can’t catch up. Chaos Knights don’t have to run forward every time – and it’s important not to default to that game plan – but it has to be said that Chaos Knights will be at their best overwhelming the opponent with massed vehicles that just can’t be dealt with quickly enough.

Overall, Chaos Knights are looking like a fun breath of fresh air that will be relevant in the competitive scene, without overwhelming every tournament they attend.