Hammer of Math: When to Scythe and When to Cleave

This week’s Hammer of Math is a bit of preparation for our upcoming Start Competing article for Death Guard. With the efficacy of Mortarion and Deathshroud Terminators, when should you use the different options for their scythes?

40k remains a game of probability and strategy, and the probability is heavily dependent on the balance of driving and gatekeeping rolls that have been a major part of the game since the first edition. With the release of Codex: Death Guard we see GW continue to incorporate meaningful choices for players. A good example of this are the weapon options for Deathshroud Terminators and Mortarion. In both cases the players have to choose between making large, heavy hitting attacks or a larger number of weaker ones. Things are further complicated by the 2CP Stratagem Haze of Corruption, which allows a Death Guard unit with the CORE keyword (Deathshroud Terminators in this case) to apply excess damage after a model has been killed to another model in the unit. Normally overkill needs to be minimized, but with that Stratagem you can safely use 2 damage weapons against 3 wound models and get the full effect.

Deathshroud Terminators provide a lethal combination of staying power and offensive ability, and with the new Terminus Est Assault Force they’re likely to be even more prevalent. These T5, 3W models with a 2+/4++ invulnerable profile and Disgustingly Resilient for damage reduction are some of the hardest models to kill in Mortarion’s Legion. Their manreaper melee weapons provide a nasty melee option with 4 attacks base plus the option to re-roll wound rolls of one thanks to the Plague Weapon ability. Manreapers have two attack profiles to choose from: Cleave hits on a 3+ at S7, AP -3 and a Damage characteristic of 2, but comes with a -1 penalty to the hit roll. Scythe hits on a 2+ at S5, AP -1, and a Damage characteristic of 1 but every attack makes two hit rolls instead of one. Since we’re dealing with a large number of possibilities we’ll use an expected value approach to determine the best choice. That is, for a given number of attacks, hit, wound, and save probabilities, and Damage characteristic we’ll figure out the average amount of damage that will be dealt. While this approach is not perfect and variance plays a major role in determining the outcome, it’s a useful starting point. The chart below compares the expected wounds dealt given the final (after modifiers) wound roll and save rolls on the target.

So for example, if you were a Deathshroud Terminator fighting a Space Marine Intercessor with Cleave, you’d have four attacks against a target that’s Toughness 3 (thanks to being in Contagion Range), giving you a 2+ wound roll and because an intercessor has a 3+ Save and no invulnerable save, they’d have a 6+ Save after modifiers. If instead you took on a Terminator, you’d be looking at a 5+ invulnerable save instead. 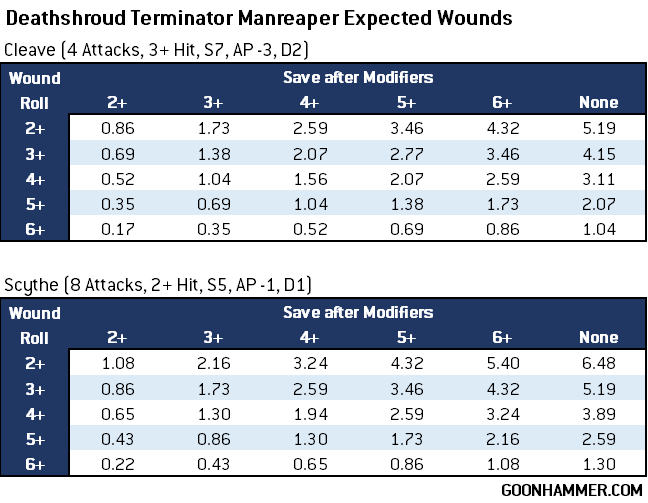 The charts above are applicable to every scenario, but I thought it would also be useful to look at a spread of Toughness and Save characteristics. In general scythe is only better against units with weak armour saves, although against certain Toughness break points cleave is superior. Against 1W models scythe is even more useful. 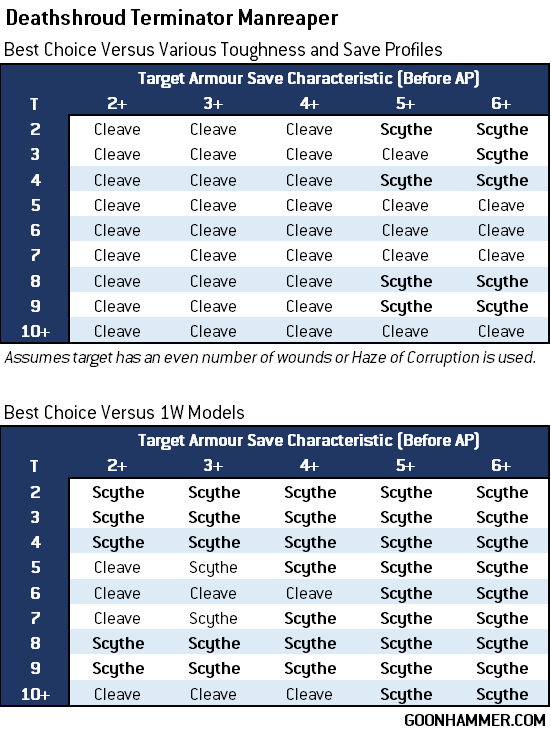 Mortarion takes things to an even greater extreme with his weapon Silence, a massive Plague Weapon that starts at S8 before modifiers. As he isn’t CORE Mortarion doesn’t benefit from Haze of Corruption, so the possibility of lost wounds does exist. As with the Manreapers there are two options. Eviscerating blow deals 7 attacks that hit on a 2+, are S16, AP -4, and deal D3+3 points of damage (though it doesn’t incur a hit penalty). Reaping scythe deals 21 S8 attacks at AP -2 but only 1 damage each. 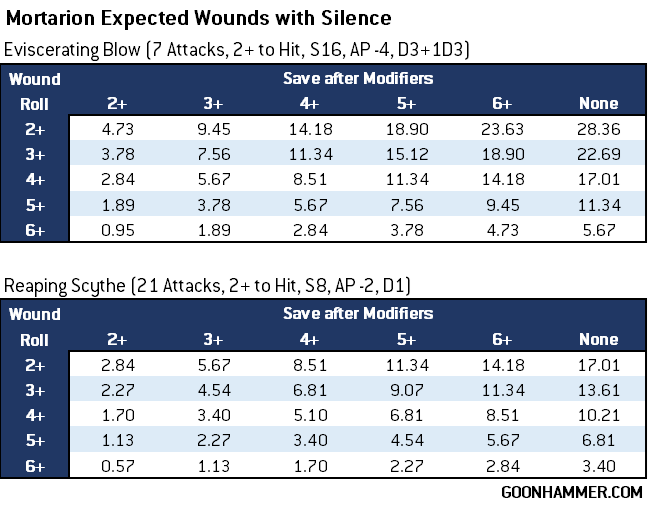 It should be readily apparent that in a vacuum eviscerating blow is by far the superior choice, and it makes sense. 7 attacks averaging 5 damage puts out more wounds than 21 attacks dealing 1 damage. But context is essential, and in this case that context is the potential for lost wounds. 7 eviscerating blows can only kill 7 models, although anything with a Wounds characteristic of 4 or less is guaranteed to die on a hit. 21 reaping scythe attacks can potentially kill 21 1W models, 10 2W models, and it’s only at 3W that the two even out. The additional D3 attacks complicates things further against 5W and 6W models; 33% of the time Silence will need two hits to kill a 5W target. So with that in mind what are the best choices against different Wound characteristics? 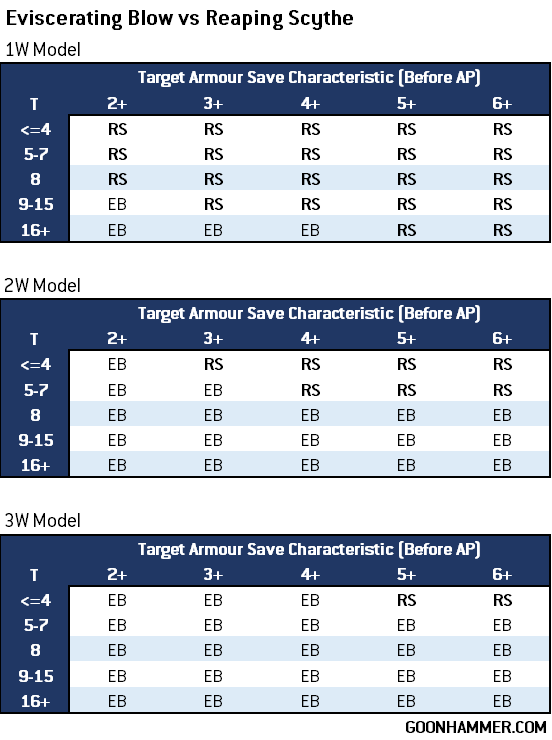 The balance of wounds, attacks, and damage have resulted in some nuance in determining which option is the most lethal for Nurgle’s favored sons, and I hope this article proves useful to you. The Death Guard have a really exciting and fun codex, and I look forward to seeing what players do once the rampant viral infections are limited to the battlefield and dice rolls. Thanks for reading! If you have any feedback, feel free to drop a note in the comments below or email us at contact@goonhammer.com. If you have any questions that you would like answered in a future article like this one, please submit them here.