Hammer of Math: Slaying the Beast

Last week we looked over some of the options available from the new Saga of the Beast expansion, focusing on offensive firepower and how devastating combinations like Lord Smashwolf Wolfsmash the 2nd could be. This week we’re focusing on The Beast himself: Ghazghkull Mag Uruk Thraka. Games Workshop took a massive step sideways when they introduced a brand new rule regarding wounds; no matter what Ghaz can only take a maximum of four wounds in each phase.  This automatically makes Ghaz the toughest unit in the game, and makes us wonder just what it would take to kill him in a single round.

8th edition has been defined, up to this point, as a game of concentrated firepower. Anything, from a grot to a Warlord Titan, can die if you damage it enough. With the Prophet of Gork and Mork rule Ghaz completely puts that on end; it doesn’t matter how much damage a Knight Dominus or Smash Captain can deal when everything past four wounds is completely disregarded. Dealing those wounds to Ghaz isn’t exactly trivial either thanks to the combination of high Toughness characteristic, armor save, invulnerable save, and Feel No Pain when Makari is within 3″ and applies Ghazghkull’s WAAAGH! Banner. Incidentally Makari probably deserves the award for “most improved” when compared to his fellow grots. The combination of 4 wounds, 2+ invulnerable save, and 6+ Feel No Pain means he effectively has 28.8 wounds, or 2880% the resiliency of his fellow greenskins. He’s clearly been eating whatever the squig equivalent of Wheaties is. Squeaties?

Killing Ghaz is going to require some brutal kunning. The traditional method of picking the target and unloading as much firepower as possible in a phase simply isn’t viable. So with that in mind we’re take a look at some options that are available for each of the phases, what’s required to execute that in each phase, and what units look the most promising. Our overall goal will be to have a 50% chance of killing Ghaz in a single round, defined as dealing 4 wounds in three different phases. In order for that to occur each phase will need to have an 80% chance of dealing 4 wounds.

The most common means of dealing damage in the Movement phase are bomb runs from Flyers, generally in the form of dice rolls to deal mortal wounds. A good example is the Boom Bomb from the Blitza-Bomber or the Heavy Bombs ability for Marauders, which have the player roll 1d6 (3d6 versus VEHICLES or MONSTERS) for each model in a unit that the Bomber flew over. Every roll of a 4+ is a mortal wound. Tyranid Harpies have a similar effect with their Spore Mine Cysts but the attack is limited to 1d6 per model in a unit; on a 2+ 1 mortal wound is inflicted except for a result of 6 which inflicts 1d3 mortal wounds.

Unfortunately neither of these options will produce a reliable amount of damage without exceeding the “Rule of Three” or engaging in shenanigans.  Using the incredibly powerful AnyDice program written by Jasper Flick we can look at the output distribution assuming one, two, or three bombers or Harpies drop straight down on Ghaz’s head. We immediately see that the bombers have a decent shot at dealing 4 mortal wounds but it’s still below the 80% threshold. There is one option; use The Swarmlord’s Hive Commander ability to force a Harpy to move again and do another bombing run. This provides the additional pass required to achieve an 82% probability of inflicting enough mortal wounds, and based on the rules and the FAQ it seems like the attack would occur in the Movement phase. The effects are similar in the Charge phase, with most abilities inflicting a mortal wound on a particular die roll. To have an 80% or greater chance of dealing 4 mortal wounds with these abilities you would need at least 3 Mucolid Spores, 4 Spore Mines, 10 dice if a mortal wound is dealt on a 4+, 16 dice if a mortal wound is dealt on a 5+, and don’t even bother if you need a 6+. 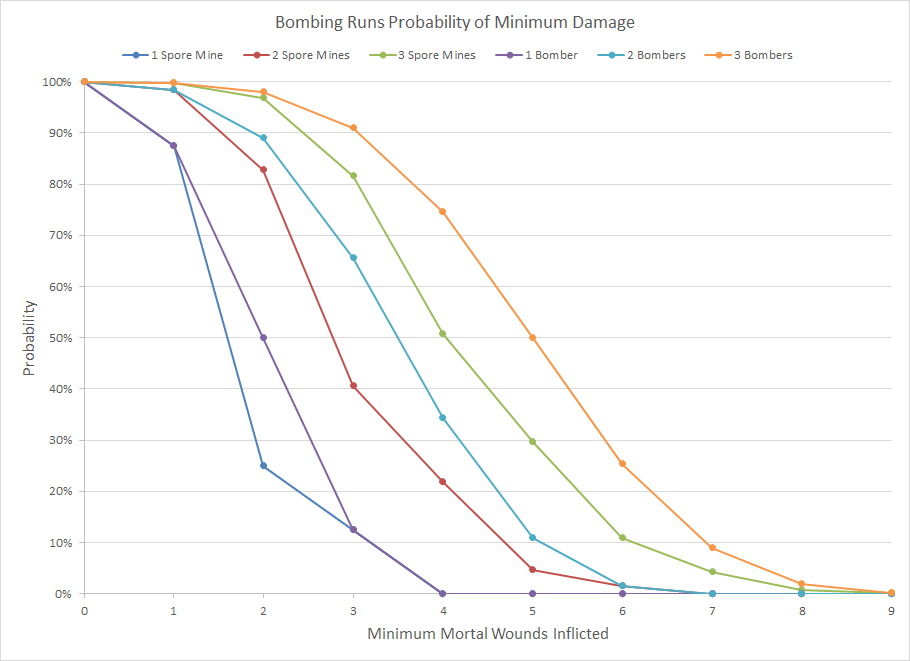 You can see the code I used for this graph here.

One notable omission in this section are the Necron C’Tan powers, which all do damage in the Movement phase. Necrons are definitely a faction this series needs to allocate a bit more love towards, and I plan on addressing that in the near future.

We’ve covered Smite and its alternatives extensively. The overwhelming majority of Smite alternatives are inferior and there are too many options to count, so instead we’ll focus on Smite itself and if it’s possible to reliably deal 4 mortal wounds. From the data we see that three consecutive castings of Smite are required to achieve our goal of 80%. Things don’t change much for Grey Knights or Thousand Sons who use the Brotherhood of Psykers/Sorcerers ability (or Tyranids who use Psychic Scream and the Resonance Barb), as they still need three castings in order to achieve an 80% probability of success. The graph below was generated by simulating the rolls 10,000 times per sequence in Excel so I don’t have any code for you. 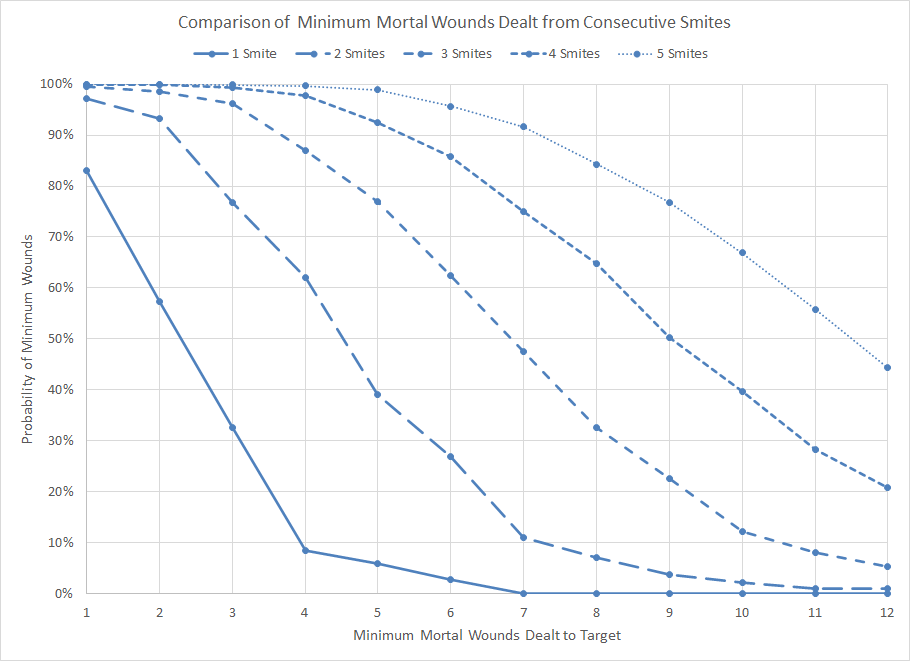 One unit that has a very good chance of dealing 4 wounds is 6 Zoanthropes, which will be able to use Warp Blast to add 3 to the damage of the Smite roll. This means the minimum damage they can do will cap out Ghaz, and the chance of getting a 5+ on 2d6 is over 80%. Grey Knights also have another option with Inner Fire, which we know will deal 4 mortal wounds around 80% of the time.

Corrode: Being physically able to get the Smite off on Ghazgkull is of course very dependent on your opponent and their placement of Ghaz and related units, but we’re talking maths here and not necessarily in-game reality. You may have better success with a number of targetable Smite-equivalents if Ghaz isn’t literally right in front of you, which Eldar and Thousand Sons are probably best-placed to pull off, though as Kevin has already alluded to these powers are usually harder to pull off or have other restrictions.

The process for inflicting damage in the Shooting and Fighting phases is the same via the classic probability chain that’s a core part of Warhammer 40,000. Every attack has to hit, wound against T7, get past either a 2+ armor save or 4+ invulnerable save, and then every point of damage inflicted has to pass a 6+ Feel No Pain check. The number of combinations available makes this a prohibitively expensive feat, so my plan is to go over a few options and provide the readers with some tools to make their own calculations. The first tool is Uily’s wonderful Warhammer Stats Engine, which emulates a lot of what I do only done by someone who can actually program. The second is an AnyDice program I put together that emulates the traditional attack sequence of 40K. So with those tools in place let’s take a look at some common profiles and see how many attacks are required to do the job and deal 4 wounds to Ghaz with an 80% probability of success.

There are obviously many more combinations, and I welcome the reader to look at particular combinations they’re interested in and see what pops up. The major takeaway here is that Ghaz is not an easy target, particularly thanks to the 4+ invulnerable save.

Once again I’d like to extend my appreciation to Uily and Jasper Flick for their respective programs and bringing some really great tools to the community. I hope that rules like what we’re seeing with Ghaz represent something new from Games Workshop; it’s a major challenge to try and take him off the board in a single turn when you have to split it across three phases. It’s also a fun challenge to see what options are available outside of the usual areas. Amusingly Tyranids find themselves particularly well suited for the task with the option to deal damage across every phase of the game if they so choose. Grey Knights are also a major threat thanks to their combination capability in the Psychic, Shooting, and Fighting phases.

Thanks for reading! If you have any feedback, feel free to drop a note in the comments below or email us at contact@goonhammer.com. If you have any questions that you would like answered, please submit them here.